Where’s the best chicken rice in Singapore? I’d like to think that my love for chicken rice is unparalleled. Could I have it for lunch every day? Sure. Dinner as well? You bet I’ll try.

In Singapore, where Hainan-adapted chicken rice is regarded as a national delicacy, there is no shortage of the dish. Cantonese-style chicken rice is also prevalent in Singapore. Instead, save for the most convenient stall-next-door, it probably is difficult to agree on which cook did it right.  As more discerning gourmands today, our idea of perfection can be marred by a snide remark from the waiter, a stiffness in the seat, or even an unsavoury food delay.

But in the pursuit of perfection, where chefs adapt and innovate, traditional chicken rice has far outgrown the old rice ball techniques (although there are still a few stalls around carrying it) and standard offerings of supplements. 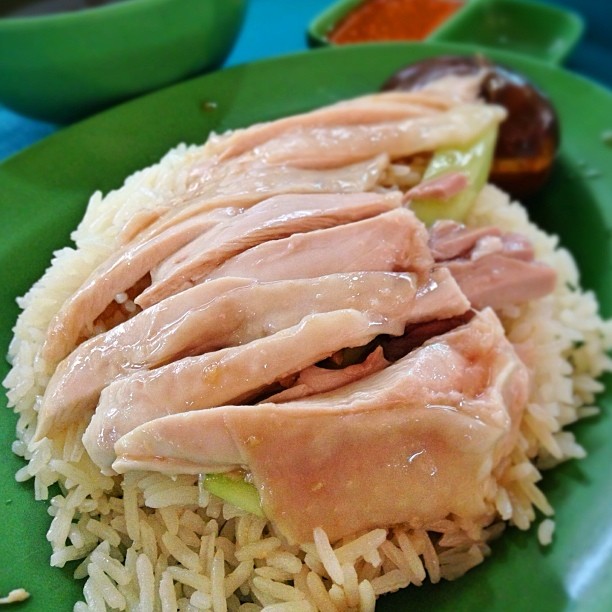 Located in the far west, I stumbled upon Xing Yun Hainanese Boneless Chicken Rice one day when I was exploring Yuhua Market and Food Centre, and decided to try it out. Tender and soft, the chicken meat is a tad oily but rice has a nice fragrance and is cooked perfectly. They specialise only in ‘white’ chicken meat, closing pretty early once they sell out. At the Nyonya-influenced Pow Sing Restaurant, the likes of Curry Fish Head and Prawn Paste Chicken are available on top of their flagship chicken rice. Though a commercialised retooling has transpired since its 1983 opening in the vicinity, the restaurant remains true to the traditional standards of perfectly-sliced, chilled Hainanese-style chicken rice.

The fragrant rice here is far from oily, so it doesn’t exactly pack a ton of flavour. But rest assured that the ginger and chilli sauce can be used copiously in your meal.

Perhaps best known to Shenton Way workers in the form of a takeaway lunch box and famous all around Singapore as the best chicken rice, Tian Tian the original at Maxwell makes a traditional set of chicken rice that has sprouted many of its kind around the country. The inviting gloss of its crystal chicken skin and beloved oily rice are some reasons you should visit the large stall before 11am and after 2pm to enjoy a quieter meal at your own pace. Even Gordon Ramsay couldn’t beat Tian Tian when he challenged Singapore hawkers. 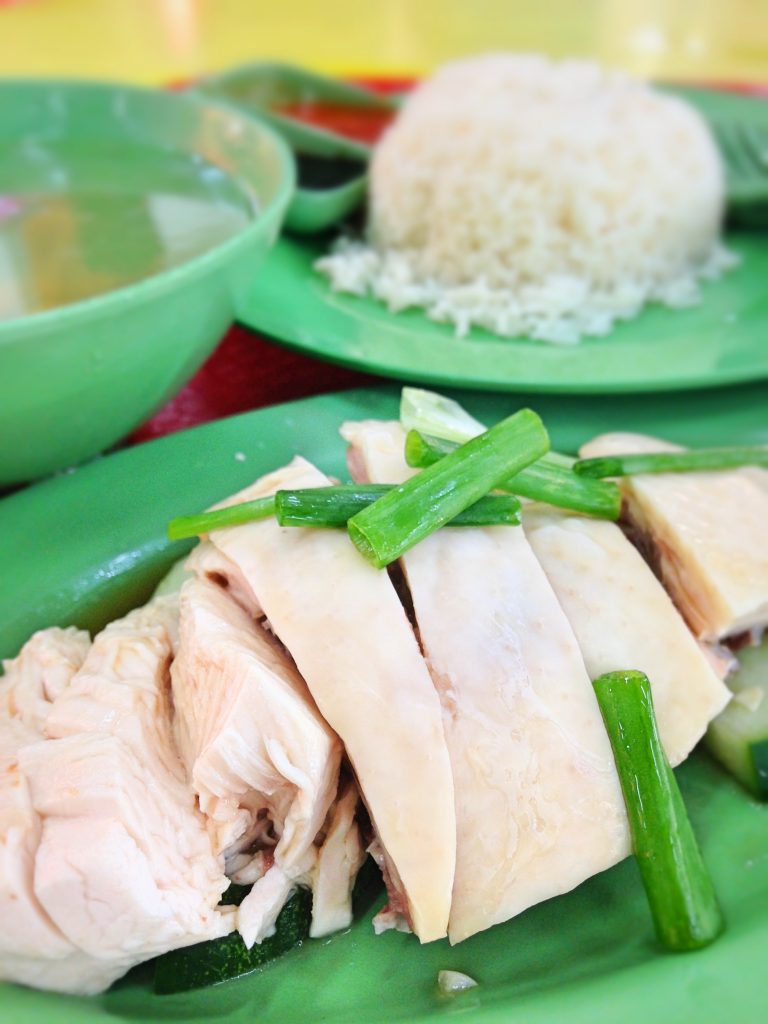 During meal times, expect to queue at least 45 minutes at Bishan’s Ming Kee, which dishes out crystal chicken feet and bean sprouts together with the basic chicken rice add-ons. Also note that the chilli here is a little watery.

While it’s an open secret that chicken (especially white chicken that Ming Kee solely dispenses) should be chilled in ice at the end of cooking, the chicken here is extra succulent and cold as the butcher prepares the meat a la minute from the ice bucket. This is Seth’s personal pick for best chicken rice in Singapore. Located at East Coast Road, Bruce Lee Chicken Rice was a bonus find for me, considering how hidden it is. A plate of rice will come alongside a yummy serving of chicken mixed with crispy taugeh, cucumber, cherry tomatoes, and braised tofu, doused in a secret savoury sauce, soup, and an unlimited serving of achar! Have you ever had a piece of crispy-skinned pork belly that left you speechless? Well, that’s what you can expect here. The chicken skin is incredibly crispy to the point of it being ASMR-worthy, but it is also succulent. All I had to do was brush the back of my spoon over the skin to receive a soothing-to-the-ear crackling sensation. Not forgetting the spicy chilli here that will inadvertently get you screaming for waataah!

Like Pow Sing, Chin Chin dishes out more than just chicken rice and has become home to many families searching for a bountiful and affordable dinner. I must make special mention of its delectably oily rice that is my preference. At Chin Chin, overcooking of the chicken is strictly refrained, which at times results in reddened meat near the bone.

Otherwise, effective cooking here ensures you wait no longer than 10 minutes for your serving of chicken rice. 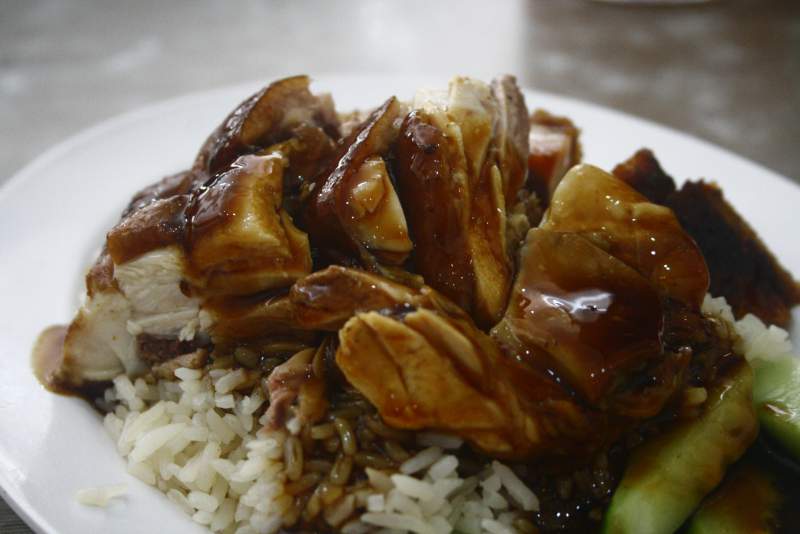 A little off the Toa Payoh Police Centre is open-air restaurant Lee Fun Nam Kee, famous for its rich and tender soy chicken as well as the sweet-savoury gravy that is most complementary with its dry rice and other meats. Its roasted pork features a madly crispy skin as well.

Pricing may come as a little shock with the rather long wait you have to endure while seated.

I can’t be sure how much weight this may bear, but rumour has it that this Alexandra Village stall sells founding father Lee Kuan Yew’s favourite chicken rice. The boneless chicken that comes with a side of acha is very evenly sliced by the butcher and its soft skin is dressed heavily with soy sauce. Together with the fragrant and soft grains, you’ll be guaranteed a tender meal overall.

Lovers of bone and cartilage will be pleased to know that Hua Kee thickly slices its chicken without removing the often sinewy bone. As a dedication to meat freshness, the stall with rather firm rice chooses not to operate on Mondays, for its chicken supplier cannot provide imports then.

Hua Kee also closes a little after lunch time, perhaps because the owners like an early rest or that they tend to shy away from the spotlight. 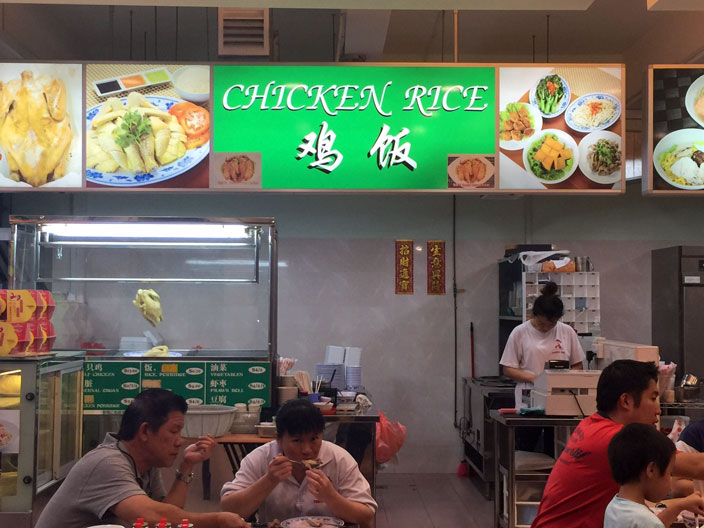 A direct translation of Kampong Chicken Rice Chicken House does an objectionable injustice to its kampong-procured chicken that it chooses for flavour intensity in all its rice, soup, and flesh. Kampong chicken is also known to be leaner and healthier, and can be distinguished from its yellow skin, but not as juicy as other chicken rice stalls though. 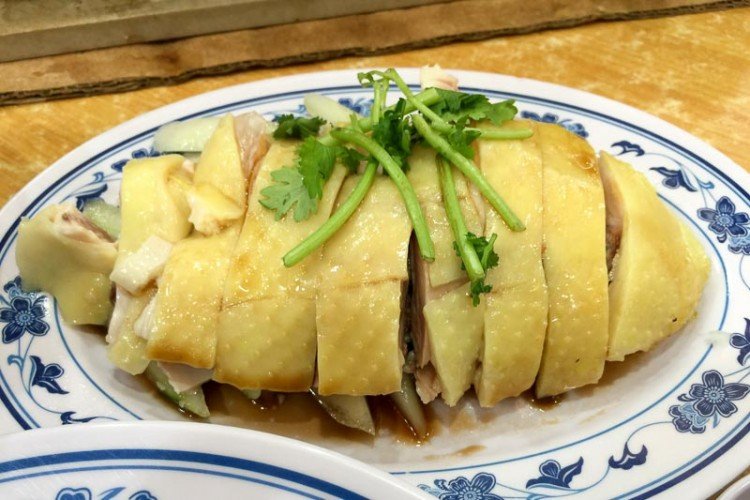 There are two branches, one at Upper Thomson and the other at Lorong Kilat which is a tad more ulu. The chicken is also sold out typically quite early at 5pm.

20 years of serving people living in the Yishun district has prepared Yishun 925 Hainanese Chicken Rice to effectively tackle the slew of lunch orders they receive daily. The juicy chicken that is coated in a thick layer of soy sauce is cooked at what the owners deem the optimal temperature. And because it is strictly boneless here, you can be guaranteed an equitable share of chicken for your money.

They also have multiple outlets all over the island, be sure to head on over to the one nearest to you to check them out! 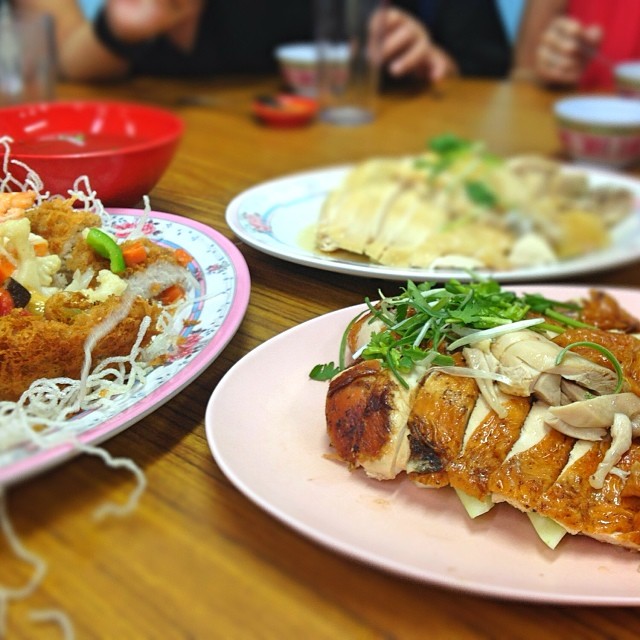 Nam Kee is one of the oldest chicken rice restaurants in Singapore, with heritage going back more than 30 years. Many of our parents or even grandparents love this stall for its old school, no frills decor and classic chicken rice. They also serve a variety of Chinese zi char dishes in this restaurant that makes it perfect for family dinners. Staff are known to be grouchy in these super old restaurants though, so don’t expect much service. If you are looking to escape the crowd at Changi Village Hawker Centre and for a hearty plate of chicken rice, Tiong Bahru Boneless Hainanese Chicken Rice, a hidden gem that deserves your visit. Compared to some of the acclaimed brands in Singapore, the chicken here is smooth and not too oily while managing to retain its juiciness. The steamed chicken here also doesn’t come with the familiar jelly-like skin as well.

Not only does their chicken rice put a smile on your face but the shop has a nice rustic feel to it, which definitely puts the ‘village’ in Changi Village. Besides, where else can you find a decent plate of food for just S$3 these days? After exploring chicken rice balls, we present the chicken rice pyramid at Boon Tong Kee— that’s how they plate their rice. Another well-known chicken rice brand in Singapore, I found that since expanding multiple outlets Boon Tong Kee has steadily increased prices while the restaurant gets fancier with other dishes, losing its original charm. Still, quality has been pretty consistent among the various outlets although it isn’t as good as it used to be.

At Katong Mei Wei Boneless Chicken Rice expect to find lurid colours emblematic of creative visual appeal displayed in the bright yellow rice, soups, complimentary achar, and glistening chicken. Other than the yellow, I’m no advocate for the slightly dry rice, but the cold and tender chicken is doused in an incredibly tasty soy sauce that I always use on the rice. Once you are acquainted with this sauce, pretty much everything on that plate will disappear.

You’ll be able to recognize a generous business once you’re offered two types of home-quality soup, three kinds of sauces, and a limitless container of achar with your chicken rice order. Also, because they’re so efficient, a 15-minute wait should be the maximum at peak hour. 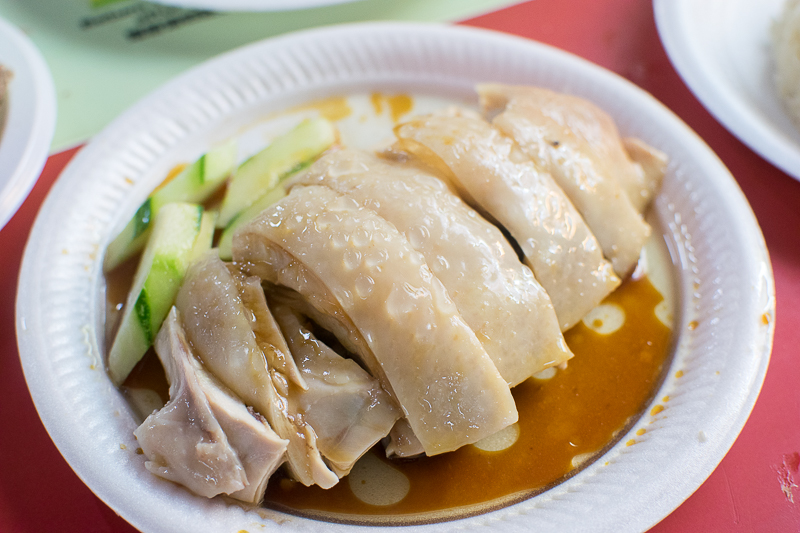 You’ll realise at 169 Hainanese Chicken Rice that the stall doesn’t have an extensive menu, but then again, great establishments shouldn’t have to. It’s a baller move that’s testament to just how much confidence they have in their offerings, and I respect that.

Think silky smooth skin marinated in an umami soy sauce, softer than many of its other counterparts by a mile, that’s the kind of chicken you can look forward to when you’re here. 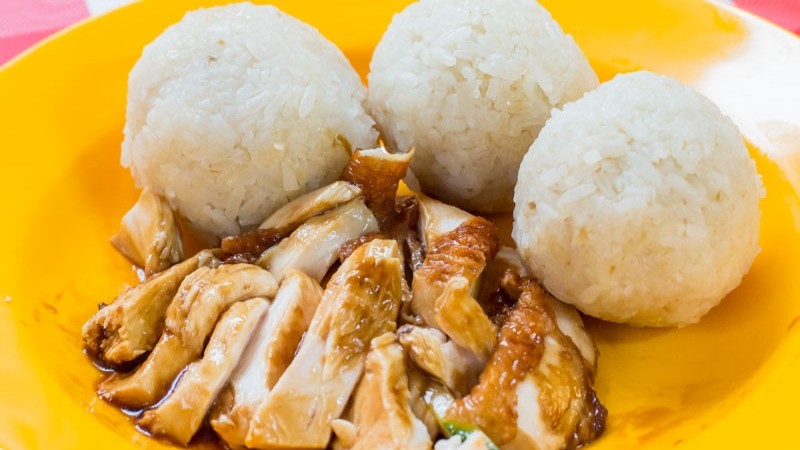 The difference between Qi Lin Xuan’s chicken rice and the others you see at most hawker centres is that the rice is moulded into balls. Commonly found in Melaka and also a part of Hainanese culture, this process may seem like a marketing gimmick— but believe it or not, there have been theories as to why the rice is shaped like that.

Glistening in the light, the skin of the roasted chicken is the first thing you’ll notice. The meat here is soft and tender, and also boneless. The chicken comes with three separate rice balls that surprisingly wouldn’t break as easily! 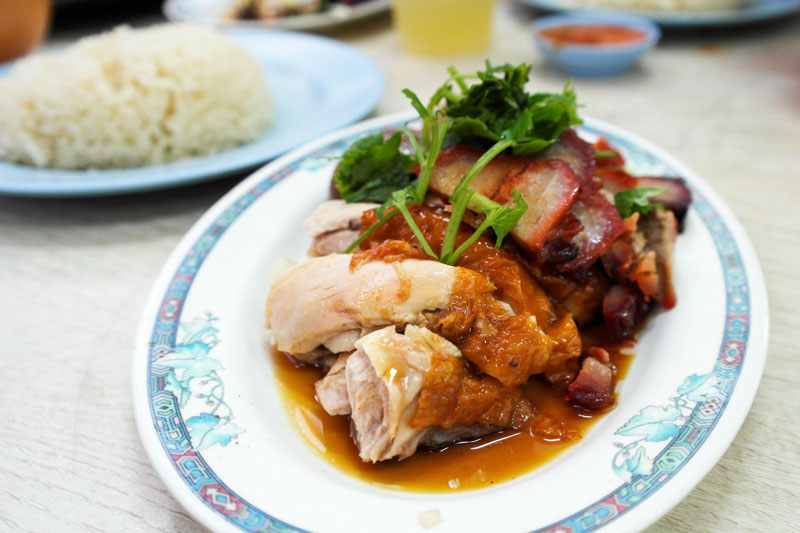 One of the more affordable options in the area, Leong Yeow has very tender roast and white chicken along with delectable char siew and sio bak. The chicken comes all oiled up and the chilli is also not too spicy yet still having its distinct fragrance. Leong Yeow is probably the most famous chicken rice hawker stall in the Bras Basah area, so you know you’re at the right stall when you see the long snaking queue.