Laksa has enamoured chefs all over the world, bringing people from faraway places to have a taste of this dish that’s exotic and savoury to many. It still continues to astound with its complexity and depth of flavour right to this day, thanks to the impeccable standards kept up by the personnel of these two establishments that I’m about to put head-to-head.

I narrowed them down as my top two picks, sensing popularity and mass appeal as the main criterion. 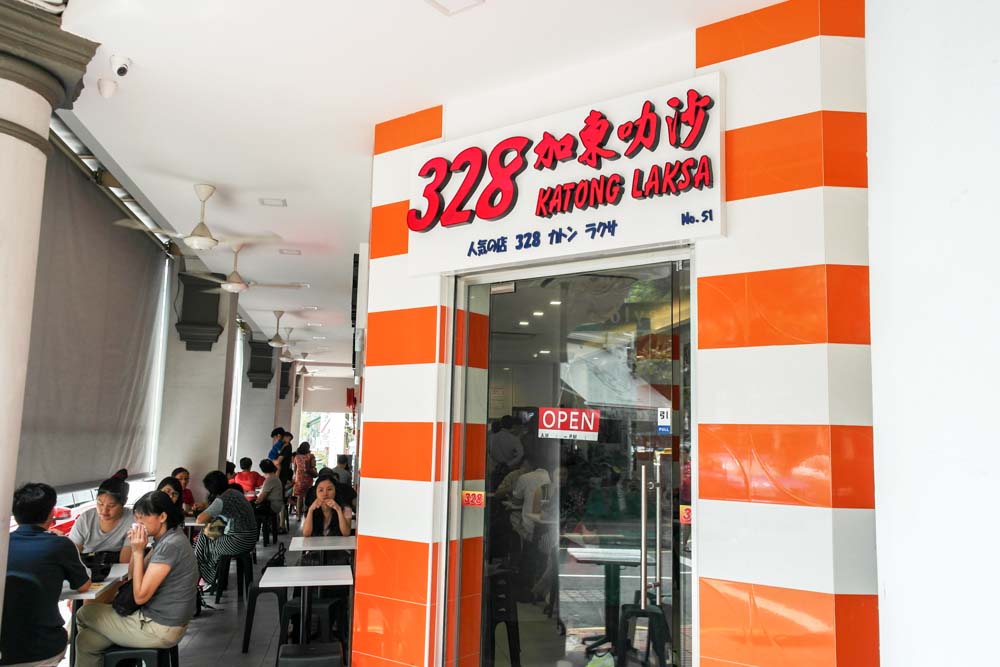 I wrote an article on my favourite bowl of Laksa noodles earlier this year, favouring 928 Yishun Laksa, and declaring it as probably the best bowl of laksa in the country. It sparked a lot of debate in the comments, so here’s a food showdown for all you sceptics.

From a Yishun boy to the rest of the world, here’s an unbiased breakdown of the full Singaporean laksa experience. Curated by the opinions of my colleagues and me, these are our collective thoughts and end-it-all verdict. 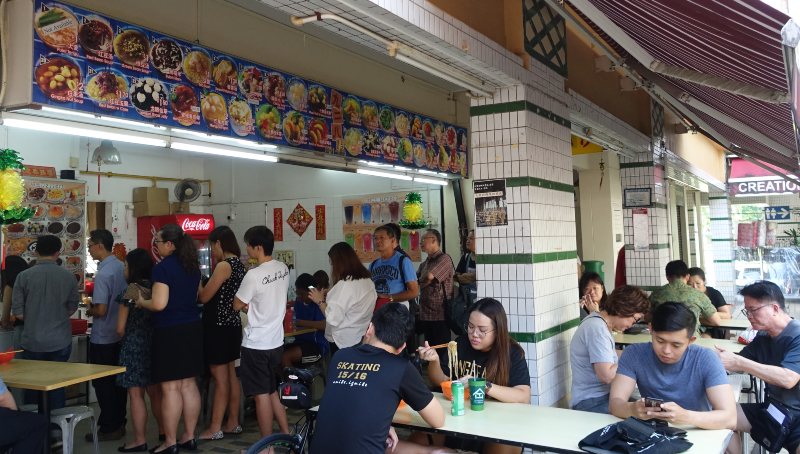 Long regarded as the giant of Singapore’s laksa scene, 328 Katong Laksa is the proclaimed go-to when identifying a standard authentic Singaporean bowl of delicious laksa. However, having started in 1998, there have been accusations of 328 Katong Laksa’s laksa not matching up to the taste of bowls served by the older street stalls of yesteryear.

928 Yishun Laksa houses the two-decade-old partnership of the stall owners. Combining efficient service and important, but laborious processes that are still true to when they first started out, it is no wonder they’ve built up to be one of the best-recognised laksa places with only word-of-mouth to aid in their thriving business.

This timeless classic is the bowl of noodles I grew up with, bringing me through after-school lunch dates in secondary school and catching up with the same friends when we can. I’ve chosen 928 Yishun laksa as a tribute, readying it for critique against some of the best in the country just to see how it matches up. 928 Yishun Laksa retains a mutually dependent connectedness with the local Yishun community, serving most people who work and live in the area. Open for business on weekdays for most of the population’s working hours, this notoriously hard-to-catch eatery banks in on lunch hour, closing the shutters just before night falls or earlier. 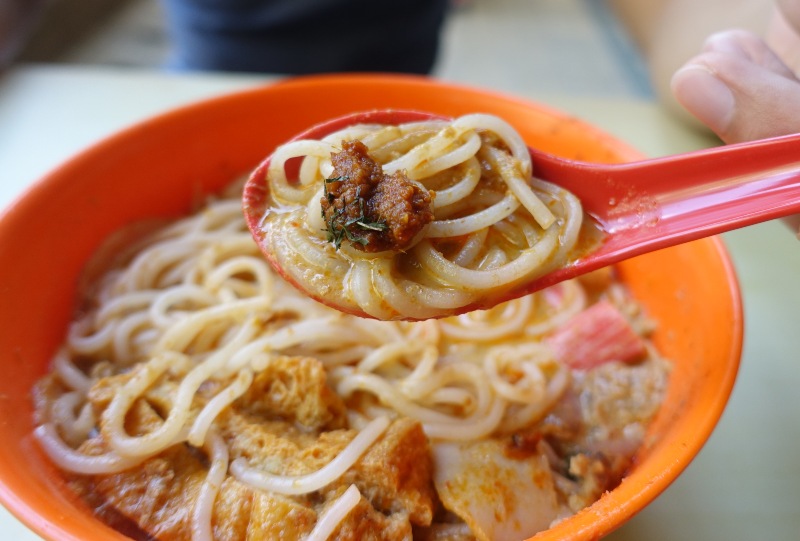 The owners are still running the stall out of the space and furniture straight from the 1990s. Its “rustic-alfresco” dining area does not do much for practicality in this weather, but its aesthetics can be appreciated for true nostalgia of the days that have gone by. The staff are ever-present from its inception and have perfected the most efficient way of churning out these bowls as fast as they come. Quality control is assured here.

328 Katong Laksa compares defiantly in that it has commercialised into appearing at five different locations across the island. We see the brand starting to morph into a household name, with its eateries now appearing at malls in a relaxed, air-conditioned setting.

Perhaps reeling from the SingTel Hawker Heroes Challenge, where Mr Ryan Koh of 328 Katong Laksa faced off against Michelin-starred chef, Gordon Ramsay, and won the competition, it boosted its popularity among an international audience. It rose greatly, too, in the consciousness of millennial Singaporeans. 328 Katong Laksa wins on accessibility, but loses on aspects of quality control as most franchises do when they expand.

The mixed reviews online echo this sentiment as well. 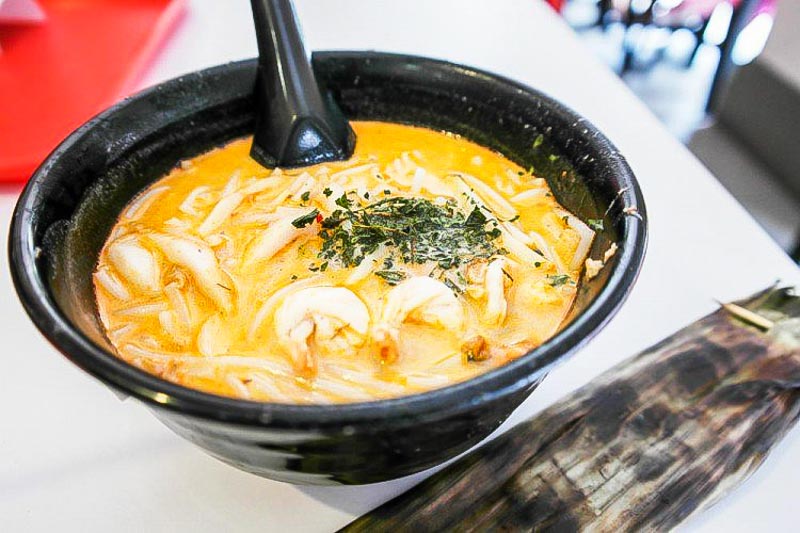 You would roughly have already known what laksa tastes like and would expect these two bowls to be as close to that food vision in your head. Yet, these two are distinctively separate bowls and each of these hearty dishes possesses its own set of unique characteristics, which startled us all. Blindfolded, you would instantaneously gather from taste alone which belonged to who.

328 Katong Laksa’s Laksa (S$7.50 for a big bowl) follows closely to the Peranakan style of preparing the dish. This bowl of noodles manages to encapsulate the history of the Peranakan community that settled in Katong years ago. The broth marries traditional Chinese ingredients with Malay influences of spices and cooking processes expertly.

Light and flavourful, the broth stood out for having an extremely well-balanced flavour profile. The broth emphatically hit savoury and salty notes from the inclusion of dried shrimp. It also leaned in heavily from the use of herbs to give it a complex body which I enjoyed very much. 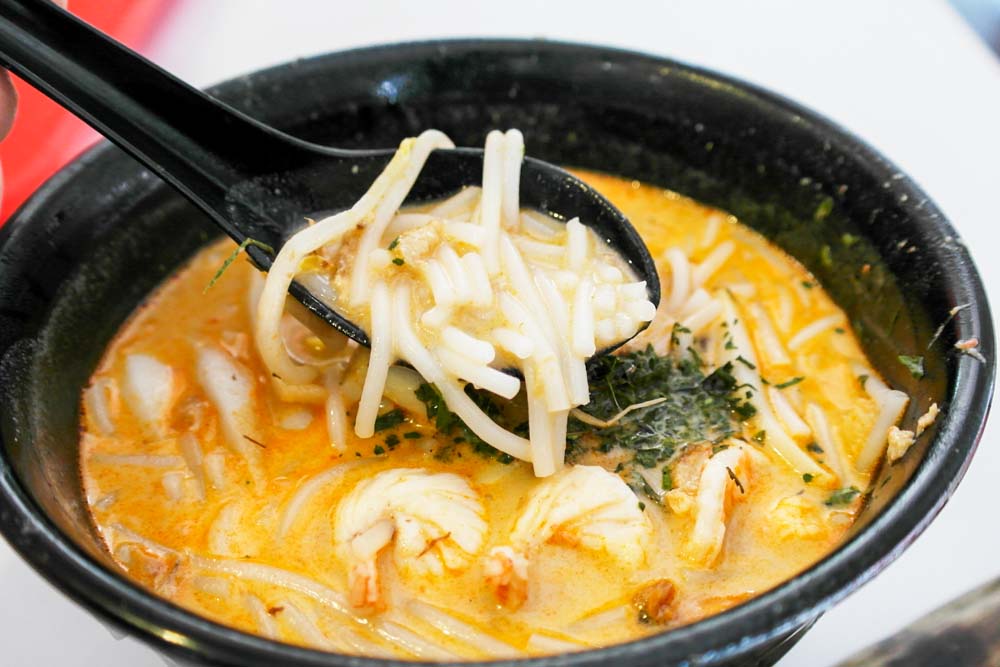 The noodles were cut to fit into a spoonful with the broth as per their signature and came al dente. The theme of the bowl became seafood as it was overloaded with fresh boiled prawns and sliced fishcake among other ingredients. These individual elements of the dish were filling and made the eating experience satisfying enough for big stomachs. 928 Yishun Laksa’s Laksa (S$3.30) was comparatively much richer at first slurp. That helped set the tone for the visual comparison of the two. Its viscosity was discernibly thicker, coating the back of the spoon with ease. It gripped onto the noodles well as it was carried into my mouth, not needing the ingenuity of cut noodles.

928 Yishun Laksa boasts an array of cheap assorted ingredients featuring the spongy tau pok, delicate boiled egg and springy noodles. It definitely made for a generous display of yummy ingredients in the bowl. There is a word to be said about the sambal though.

Perfuming of deep intense spices, it completely changed the whole composition of the laksa. Extremely robust with flavour, the broth became a different dish entirely. Spicy and lightly warming the throat as it went down, this induced a case of the sweats for me in a very good way. In my own personal opinion, I prefer 928 Yishun Laksa’s bowl first, coming at almost half the price of 328 Katong Laksa’s. 928 Yishun Laksa produces bowls of the creamiest laksa on the island and I accept that as no less than the standard for my personal best bowl of laksa.

These two establishments have been running for almost 20 years, but each had different trajectories to arrive at where they are now. The commercial glamour has transformed 328 Katong Laksa’s brand into a mass-appeasing bowl of noodles.

928 Yishun Laksa does not change for anything or anyone. For the people who gripe about “it used to be good, but not anymore”, this bowl is for you. The processes and personnel have not shifted from when they first began in the late 1990s. It’s as authentic as you can get, true to the same hands serving you each time. They say good food transports you to a different place.