Being a food writer, I’ve come across and tasted many cuisines. However, I must confess that the Peranakan cuisine is one that’s very foreign to me. It wasn’t until I recently ate at the National Kitchen by Violet Oon that I became interested in it. 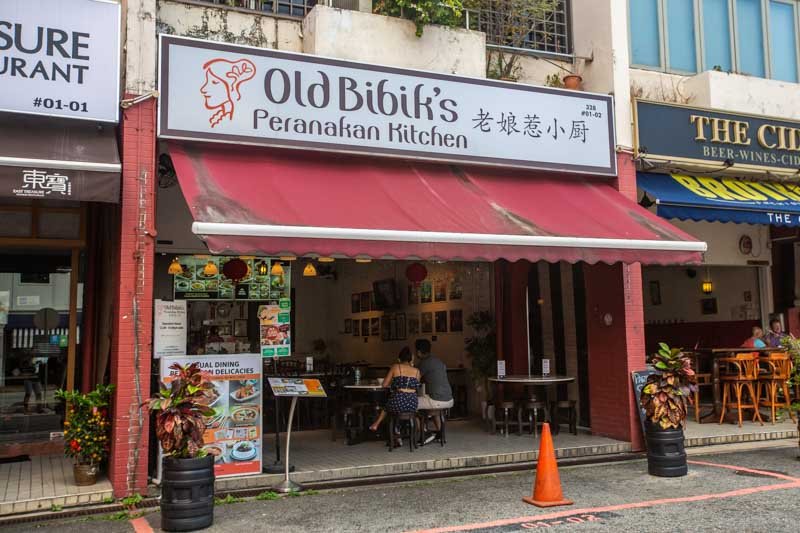 Since then, I’ve been searching for places in Singapore which serve up authentic Peranakan food. My hunt finally led me to Old Bibik’s Peranakan Kitchen.

Situated amongst a stretch of Peranakan shophouses along Joo Chiat Road, stepping into the little restaurant was like entering a time machine. From the marble tables to the wooden chairs, I really enjoyed the old-school vibe of the restaurant. They even hung a signage at the entrance as Chinese shops traditionally do. On it was the Chinese characters ‘老娘惹’, meaning ‘old Nyonya’.

The owner, Mr Adrian, has a Peranakan background. The recipes behind his many dishes once belonged to his late grandmother, who was a nyonya. Being an avid traveller and photographer, Mr Adrian is abroad most of the time. Therefore, we were really lucky to catch him on our visit. On his recommendation, we had the Buah Keluak Tofu (S$15) for starters. Slathered with a black, gooey substance, this dish is probably not the most visually appealing. However, Old Bibik’s take on it is perfect for those of you who’re trying buah keluak for the first time.

The buah keluak had an extremely fine texture, unlike when they’re usually served in their shells. I loved how they were able to thickly coat the pieces of deep-fried tofu and make for a substantial mouthful. 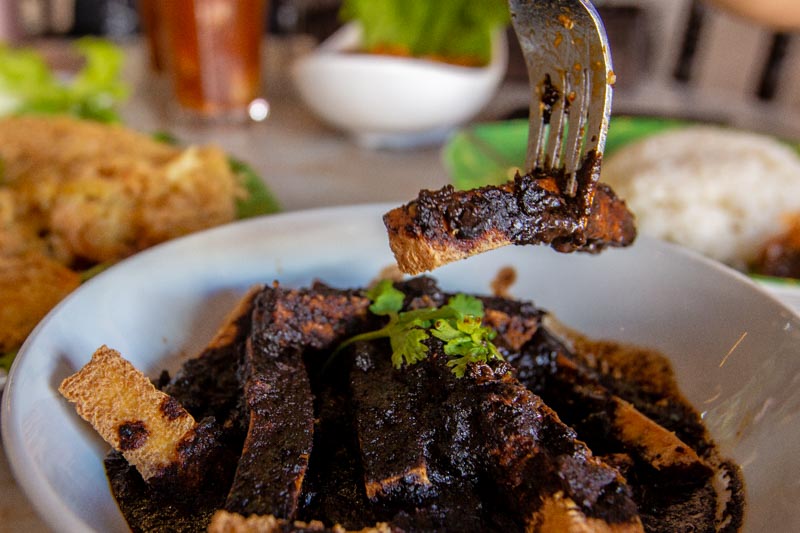 They were mildly bitter, a pleasant surprise since buah keluak is usually pungent and overwhelming. We found the dish very palatable as a result.

Furthermore, most Peranakan eateries usually serve the fruit, poisonous before fermentation, with chicken. But the high demand for a vegetarian option made Mr Adrian use tofu as an alternative. 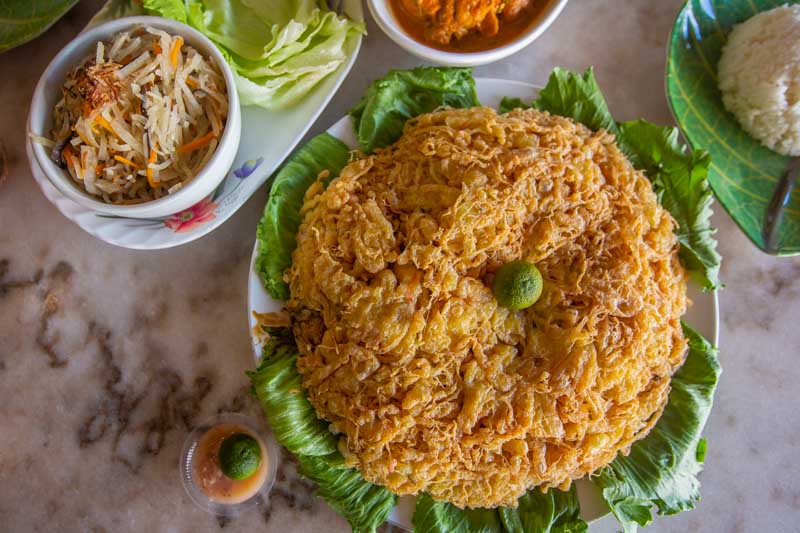 With such a unique starter, we were ready to move on to the main dishes. However, Mr Adrian insisted that we try his one-of-a-kind Crispy Chinchalok Omelette (S$15).

The massive dish intrigued us with its fluffy texture. It was so light and airy that it looked like a cloud made out of eggs. In it were onions, mushrooms and prawns. Every bite was a different combination of savouriness. However while the textures of the ingredients complemented one another well, we felt the omelette was sinfully oily.

The owner explained that this was one of the many dishes that he had modified from its original recipe. Customers were looking for a different take on the traditional egg foo young, so he decided to change its cooking method to suit them. 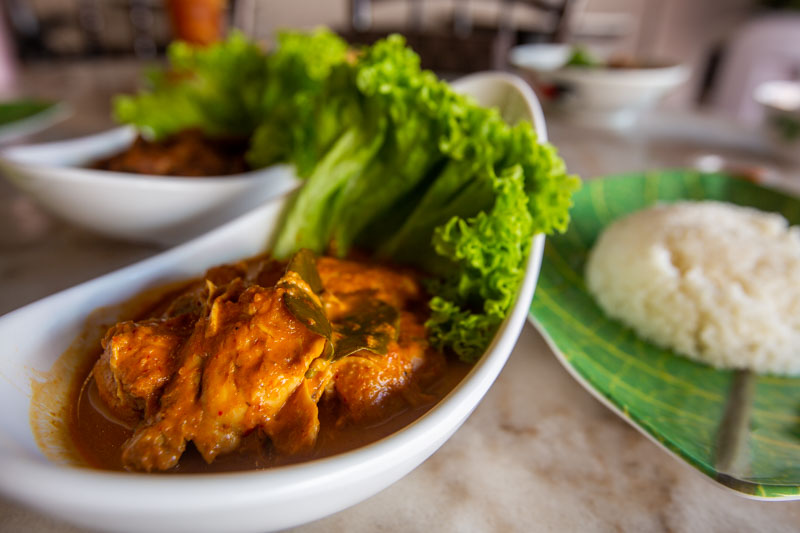 Moving on to the meats, we had Old Bibik’s Nyonya Curry Chicken (S$10 for small, S$16 for large). I was initially sceptical about how different curry chicken can get. However, the consistency and flavour of the curry would soon prove me wrong. It had a very viscous consistency which allowed it to perfectly coat my white rice. I found myself scooping loads of it onto my rice as a result. It also leaned towards the sweeter and buttery side, perfect for people with low spice tolerance like me.

The chicken meat was fork-tender and springy as well, proving that they were fresh. 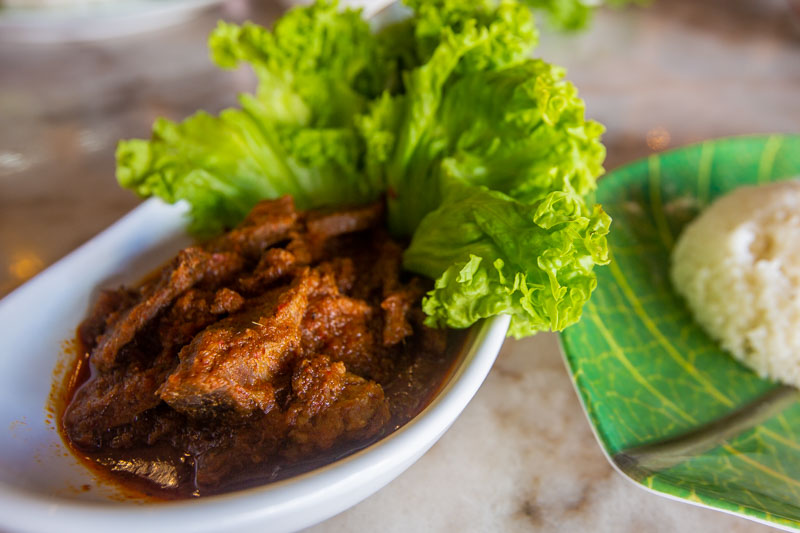 We also had the Signature Mutton Rendang (S$14 for small, S$24 for large), another dish the owner slightly modified from its original recipe.

We noticed the rendang had less gravy than it typically should have. Mr Adrian clarified that this was intentional as his customers prefer it this way. 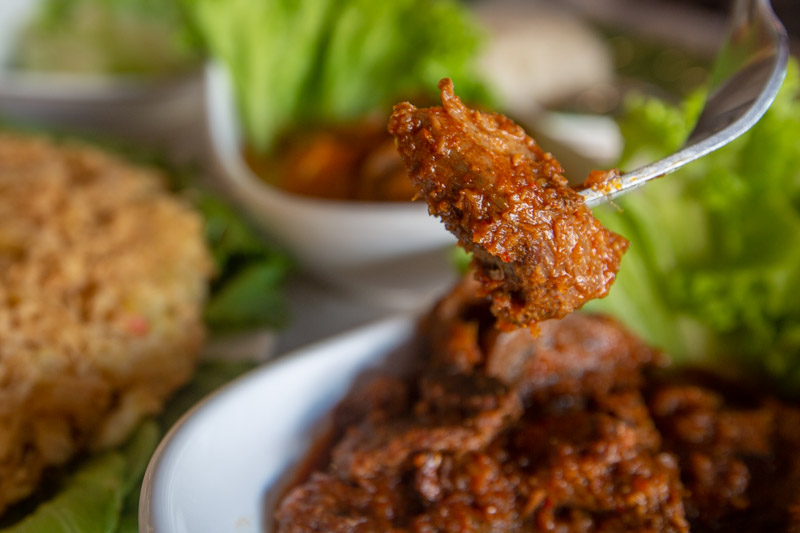 The mutton also didn’t have its familiar gamey taste and the flesh was firm but tender while being able to absorb and retain the decadence of the three-hour-stewed gravy. 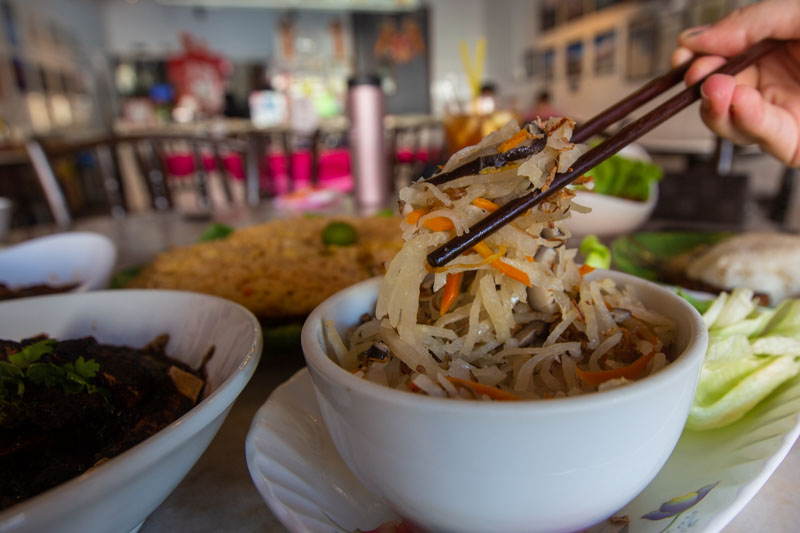 The owner also recommended the Jiuhucha (S$15), one of his dishes that frequently runs out.

He emphasised that the staff hand-cuts all the turnips and carrots and doesn’t use machines as that would be untraditional. Hence, there were varying textures since the vegetable strips were of uneven lengths and thicknesses. While the vegetables were moist and crunchy, there was also a slightly chewy texture. We thought it was just the mushrooms but it turns out that there’re actually cuttlefish slices in it. Apparently, it’s one of the elements which make the dish so popular. 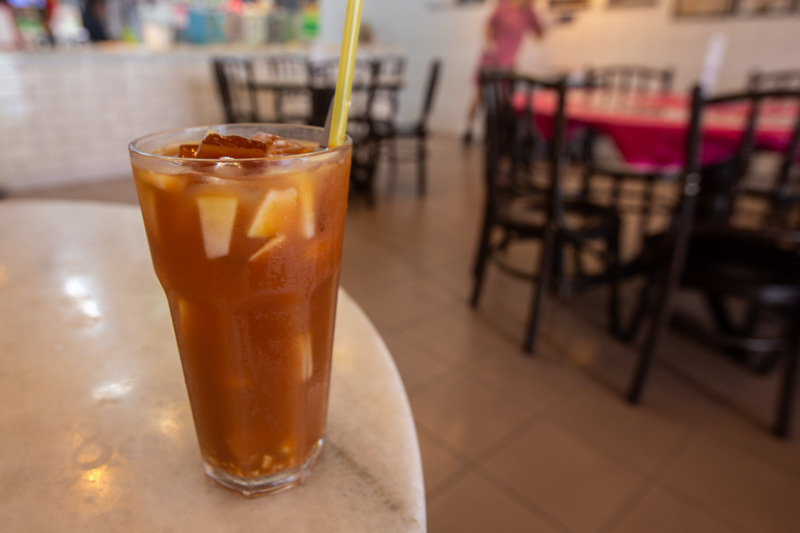 To refresh ourselves after such a hearty meal, we had their signature Guava Citrus Tea (S$5.50). The sweetness was reminiscent of an ice lemon tea at the beginning. However, the distinct sourness of sour plums came in much later and lingered on.

There were even crunchy dices of guava in the drink, making it a perfect dessert to end our meal.

Being in business for nine years now, Old Bibik’s preserves traditional Peranakan cooking methods while catering to the masses. They’ve expanded from a humble hawker stall to a restaurant of their own, so they’re definitely doing something right.

Even though the prices here are relatively steep, I’d gladly pay and return for such homely dishes.