With the trend of hipster cafes conjuring up an artificial sense of nostalgia, here’s a list of 15 nostalgic eateries that have actually been around for decades, with an old-school charm none of those new cafes can recreate.

This list was painfully hard to compile, sadly so. Simply because age old institutions like these don’t really exist anymore and one by one they are disappearing, being driven away by that swanky new food joint. Which is such a shame in my opinion. As a young person, sure, I do like that new eatery with the super chic design but I also do appreciate these traditional eateries.

It is that sense of nostalgia, of what your grandparents would have liked, a slice of history and tradition that cannot be replicated or replaced. I guess in that sense I am kind of a traditionalist.

After all, old is gold!

Peranakan cuisine has always been a Singaporean favourite and Guan Hoe Soon is renowned as a trailblazer for this fusion style of cooking. Established in 1953, it proudly holds the mantle of oldest Peranakan restaurant in Singapore. It is family-owned and the torch has already been passed down for 3 generations.

Guan Hoe Soon emphasises heavily on authenticity, foregoing what’s trending in the food scene today for a strict adherence to their original recipes and cooking methods. Pair that with fresh ingredients, quality spices and a determination to deliver the best Peranakan dining in the country and you know that they will be around for a long time to come.

Hua Yu Wee Seafood Restaurant  is 70 years old in 2022 and definitely looks the part. Forget the flashy facades you’ll find on most young upstarts, this place is simply an old bungalow with a huge patio that was awarded landmark status on the Bedok Heritage Trail in 2016. What it lacks in loud décor, it makes up with high-quality authentic local food.

With a commitment to serving the best zi char seafood dishes in an unpretentious setting and simple presentation, Hua Yu Wee is easily one of the best in the business. Their affordability is another factor that keeps me coming back for more every few weeks.

Founded in the early 1960s, Samy’s Curry Restaurant is still run by the original founder’s family. Originally at Tank Rd, they moved to their current location in Dempsey in the ’70s and have been at that location for over 5 decades now. The restaurant has won several awards for its wonderful food and many more for good entrepreneurship as well.

Much of their stellar reputation stems from the use of a special blend of high-quality spices. Those exotic spices form the base of dozens of secret recipes used to create the masterpieces on the menu, including the famed Masala Chicken, Fish Head Curry, Fish Cutlet and Mysore Mutton.

Fatty Weng has its roots in a roadside stall on Albert Street set up by the man who named it for the nickname he had earned from his customers. That was way back in 1967 but most Singaporeans remember the Fatty Weng that was located at the Singapore Badminton Hall from the 1980s to 2007. They also likely recall fondly its signature opeh leaf takeaways.

At its current location at Burlington Square, Fatty Weng continues its tradition of whipping up the same traditional Cantonese zi char delicacies that have etched its name in the annals of Singaporean gastronomy. In 2022, Ban Heng is celebrating half a century of delighting a legion of loyal customers. Their first restaurant that opened at Boon Keng Road still sees long waitlists, especially during Chinese festivals such as the Lunar New Year. Specialists in Teochew and Cantonese cuisine, they are known for using only the freshest high-quality ingredients. Visit the Boon Keng branch to indulge in Teochew classics such as their signature Teo Chew Cold Crab and Buddha Jump over the Wall. Ban Heng is on the pricey side of things but it’s policy of not adding a Service Charge is more than enough to entice me again and again.

Inside the iconic Raffles Hotel, the Tiffin Room is decked out in wooden furniture, white table linens and overhead ceiling fans reminiscent of the British colonial era. Operating since 1892, it has been serving up Northern-style Indian cuisine and its signature curries for years.

Dining here doesn’t come cheap though, ranging from $65-$75++ for a 3-course set menu. But expect the best service that will transport you back to the times of the colonial elite. Colbar, short for Colonial Bar was initially a canteen for the British Army in 1953. Since then it has shifted locations and become a fully operational cafe, serving a mix of the same Western and Eastern fare. The stand alone building is pretty out of the way and is probably inconvenient to get to without a car.

But it is a favourite hideout for those looking to get away from the busy city to sit down, have a cider and bask in the ambience. The place screams retro with wooden panels and desks and classic memorabilia keepsakes lining the store. Favourites here range from the curry chicken to pork chop just like how they have been served for the past 60 years. Mention where to have traditional coffee and one of the first places that come to mind is the Killiney Kopitiam. Established in 1919 with the original stall located along Killiney Road, this is the place to go for an aromatic freshly-brewed cuppa with the age old kaya toast and soft boiled eggs.

This stall is certainly nothing fancy but very comforting with its familiar flavours and taste. As it happens, it’s so good that they have over 20 franchised outlets all over Singapore and you can buy bottles of their home-made kaya and store them for kaya toast-related emergencies. 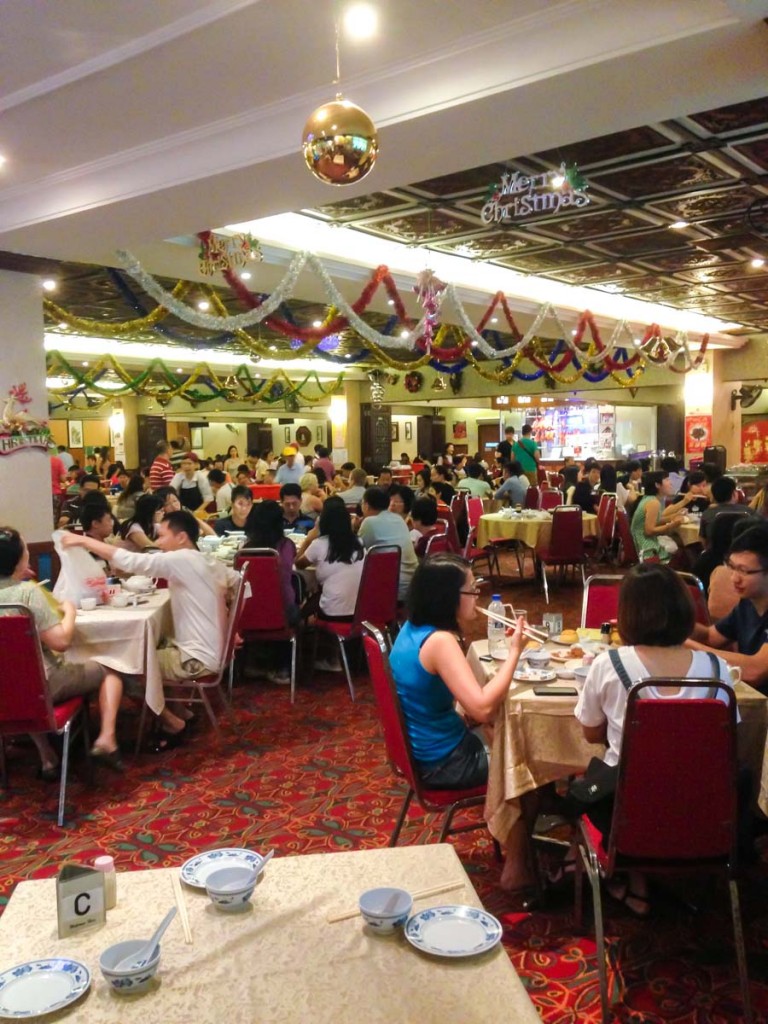 This is the place to go for dim sum from a trolley only from 8am to 3pm (Mon to Sat), and yet another restaurant by one of the “4 heavenly kings” of Cantonese cuisine. You can get your traditional dim sum items from the senior ladies pushing the trollies and converse with them in Cantonese. After dim sum hours, you can indulge in a wide selection of treats from their à la carte menu. They also have set menus you can have a go at.

The restaurant literally looks like it hasn’t had its decor changed since the 60s, with its bright red steel chairs and covered tables. A nice place to bring your gramps who has probably dined here often in the past.

Stepping into Heap Seng Leong feels like I’ve been transported to my grandparents’ time. The place has been open since the 1970s and not much has changed since. You can still find the boss, now in his 80s, personally brewing cups of kopi in a white singlet and striped pyjama pants like how he has always done it.

A must order is the traditional kopi gu you (coffee with melted butter). Heap Seng Leong is one of the few places that serve this artery clogging kopi that definitely isn’t your everyday kind of drink. 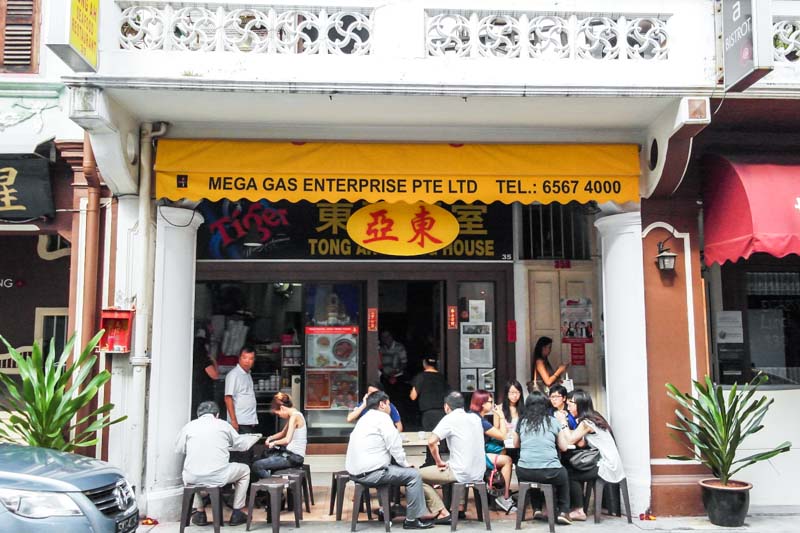 The original building which has become somewhat iconic was built in 1939 at the turn of Teck Lim and Keong Siak Road. Serving up your traditional Singaporean breakfast of kaya toast, Tong Ah has what some argue to be one of the best kaya toasts in Singapore, with their homemade kaya that takes the cake.

Unfortunately, the original Tong Ah building had been bought over and changed into the stylish Potato Head Folk. But fret not, the pretty building still stands at its original position, and Tong Ah Eating House had relocated just down the street on Keong Siak Road.

One of the oldest Hokkien restaurants in Singapore that has been around since 1978. The interior is that of an old but extravagant Chinese restaurant, the kind your grandma would be happy to go to.

Famous for their signature dishes like the “black” Hokkien Mee and crispy Oyster Omelette, Beng Hiang gives you the privilege of stepping back into the 1980s while feasting on local Hokkien food amidst their mid-century style decor.

Not only do they have an à la carte menu, they have also created set menus and bentos, as well as a dim sum buffet. Talk about variety!

Since 1989, Jing Hua has been serving up its popular dumplings and have since expanded to opening 2 more outlets from what started out as a humble stall in a Chinatown shophouse.

My personal favourites would be the panfried dumplings and red bean pancakes that I crave every now and then. In true retro Chinese hospitality (oh the irony), don’t expect good service at the original stall, but great food.

Now, I’m pretty sure this place needs no introduction. Chin Mee Chin Confectionery along East Coast Road has been serving freshly made Chinese pastries and kaya toast for the longest time since the 1950s. All of which evoke a sense of nostalgia, something that takes you back to the days of your childhood. This Hainanese coffeeshop exudes an old world charm with its ceiling fans and marble-top tables typical of coffeeshops back in the day.

A favourite of traditionalists and hipsters alike, you can almost always expect to have to queue for a table. You might want to get there early though, because they sell out fast.

Spring Court claims to be the oldest existing Chinese restaurant brand in Singapore, first opening in 1929 at Great World, then shifting multiple times till its current location at Chinatown in 2005.

The restaurant is on to their 3rd generation of family management, and look poised to continue their strong restaurant history.

A Singapore Chinese style mix of Hokkien and Cantonese cuisine, Spring Court is a massive 650 seater, 4 story restaurant building. The 4th floor even has private karaoke rooms that you can book to entertain guests.

Chope: Save 10% at Spring Court

Hass Bawa: One of the best mee goreng plates in Singapore… when they get it right