Without a doubt, there are many amazing hawker stalls around Singapore, and I’m sure you’ve curated a list of your personal favourites just like I have. Of course, everyone may not share the same opinions on where to find the best chicken rice, laksa, beef noodles and so on. Most stalls don’t care much for their competitors, minding their own business and prioritising their customers’ satisfaction over everything else.

However, some stall owners have made it their own personal vendetta to beat out their competition, even going to the extent of hiring a hitman to assault the supervisor of a rival eatery! If you’re one for knowing the “tea”, here are the five most intense Singapore food feuds to keep you on your toes, and rest assured that some of these stories are about to get nasty.

With both of these restaurants having such a long-standing history and them being right next to each other, the rivalry between them has continued to persist, with each restaurant racking up a loyal following of customers that refuse to eat at the other. Having said that, no one expected that Zam Zam would resort to such violent means to threaten Victory Restaurant.

Upon hearing this, Zam Zam staff started arguing with Mr Liakath, and Mr Zackeer Abass Khan, the owner of Zam Zam, allegedly threatened to “do him (Mr Liakath)” shortly after. On 26 August 2015, Joshua Navindran Surainthiran assaulted Mr Liakath with a knife, inflicting deep cuts on his right nose and right upper lip, after allegedly being hired by Mr Zackeer for S$2,000 to carry out the hit on Mr Liakath.

This series of events led to the arrest of Joshua, and probably a permanent stain on the reputation of Zam Zam after their attack on Mr Liakath over a business feud.

Hock Lam Street Beef Kway Teow is a household name that I’m sure you’ve all heard of before, with its history dating all the way back to 1921 when founder Tan Chin Sia set up his stall along Hock Lam Street and served Teochew beef kway teow using a recipe passed down from his father.

Just last year, fourth-generation owner Tina Tan announced the closure of the Original Hock Lam Street Beef Kway Teow due to manpower issues, and there was a collective sigh of unhappiness and despair from the foodie community at losing a pioneer of Singapore’s beef kway teow.

Anthony, the founder of Original Popular Hock Lam Street Beef Kway Teow at Far East Plaza, had helped his father cook in their stall since the age of 12 and has always prioritised making his food by hand as part of the restaurant’s tradition, even after opening his own stall.

Meanwhile, Francis Tan, the founder of Hock Lam Street Popular Beef Kway Teow at Purvis Street, was a former export trader for 11 years, before entering the beef kway teow industry. He claimed that Anthony lied about helping to cook in their father’s stall, and only helped to clean tables and wash dishes.

Regardless of the family squabbling within the Tan family, at least they all tried to carry on the family tradition of beef noodles in their own way. I know the generations before me, including my parents, often consider Original Hock Lam Street Beef Kway Teow as the best beef kway teow in Singapore, and I hope that the other stalls will still be able to continue its legacy.

These siblings all hail from Rochor Original Beancurd, the famous tau huey stall founded by their parents in 1955 at the intersection between Beach Road and Rochor Road. Since the age of 12, their eldest son Koh Koon Meng would help his parents sell their handmade beancurd, and he continued to refine and develop the recipe with his mother after his father passed in 1986. Soon after, his two younger brothers William and David joined the business as well, and the family opened their first store at Short Street.

The family feud began when Mdm Koh allegedly favoured William, the second son, by giving him and his wife a share of the company but not her other two sons. When William challenged David to open a store next to him, both David and Koon Meng did just that, letting William take over the family business that they had all grown up in.

Despite all of this, all four businesses have now passed on to the third-generation, and these new owners have decided not to carry grudges anymore towards their family members, instead “look(ing) forward, not backwards”. And in case you wanted to know, most reviews have found that their tau hueys all taste similar—makes you wonder how successful they could have been if they had put their disputes aside. If you ask any foodie for chicken rice recommendations, there’s a high chance that the name Tian Tian Hainanese Chicken Rice will be mentioned. In actual fact, you’ll probably get the same answer from a number of tourists as well, who travel to Maxwell Food Centre just for a taste of this iconic chicken rice that was awarded the Michelin Bib Gourmand Singapore in 2016 and 2017.

It’s even been praised by celebrity chefs like Anthony Bourdain and Gordon Ramsay, the former saying that the chicken rice was so fragrant and delicious that it could be eaten on its own. 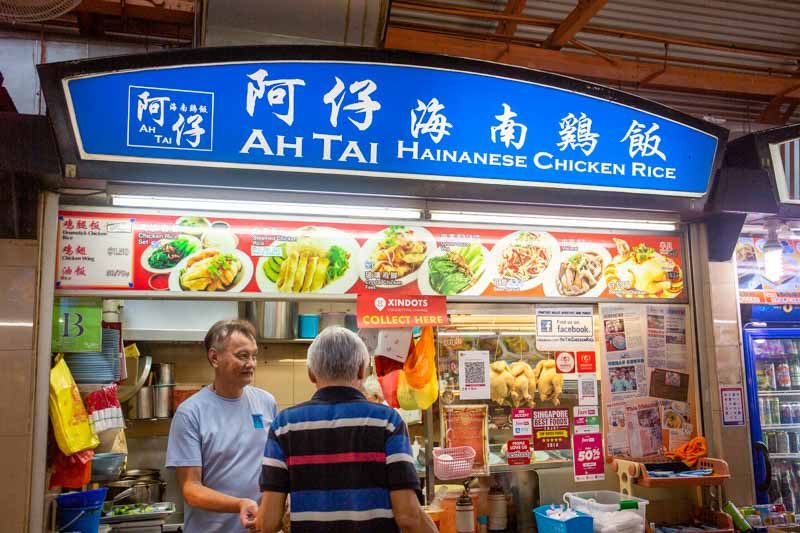 Well, you’d be surprised to find out that Ah Tai, the former head cook of Tian Tian for 20 years, has left the famed stall and started his own just two stalls down! However, the queue at Ah Tai Hainanese Chicken Rice is not half as long as the ones at Tian Tian, probably owing to Tian Tian’s preceding reputation.

Ah Tai revealed that he left after his boss handed the business over to his daughter, the current owner of Tian Tian. Ah Tai and the boss’ daughter often fought over the chicken rice business, and Ah Tai eventually quit and opened his own stall in 2012 to carry on his passion for cooking.

This is yet another story where there are multiple stalls with the same name—Katong Laksa. I’m sure you’ve tried at least one of the big three: No. 57 Katong Laksa, 328 Katong Laksa and No. 49 Katong Laksa, all of which either have franchise stalls or branches across Singapore. But, why are there so many? Here’s the rundown on the Katong Laksa war and how it all started.

In 1963, brothers Ng Juat Swee and Ng Chwee Seng started the laksa craze selling laksa at the coffee shop at No. 49 along the 50m stretch of East Coast Road, called Marine Parade Laksa. The brothers moved out of the stall in 1998 when Mrs Teo, the landlord, wanted to raise their rent. Ms Nancy Lim, a food stall helper from Clementi, then took over the stall and renamed it 328 Laksa.

A year later, Mrs Teo decided to take over the stall herself, leading Ms Lim to open another stall across the road at No. 51. Simultaneously, three more laksa competitors sprung up—the sons of the Ng brothers at No. 57 and two other stalls at No. 45 and No. 47. Thus began the start of the Katong Laksa war, where employees from the five rival stalls would tout customers and claim that they were the “original” noodles. In spite of all this drama, I would say the one upside of this feuding is that we customers all get to enjoy new versions of the same dish from different hawkers. It’s also interesting and encouraging to see how passionate these owners are about their food, to the extent that they would compete with their own siblings for a better representation of their family’s legacy.

Reading about this unresolved history makes me want to visit these stalls and see what the fuss is all about. Hopefully, the third and fourth-generation owners of these businesses will be able to put their feuds aside and prioritise the preservation of hawker stalls and the legacy of these dishes that have been perfected over the years.