Westies, assemble! Don’t you just hate it when your smug Eastie friends brag about how much good food there is in Bedok, Old Airport Road and wherever else? Yeah, me too.

As someone who has lived in the western part of Singapore all my life, it can get frustrating when all the rave food reviews are about hawker centres in the East. We get it, you have superior hawker food. But now, if you live in the far West as I do, there’s a really good bak chor mee stall you can go to. 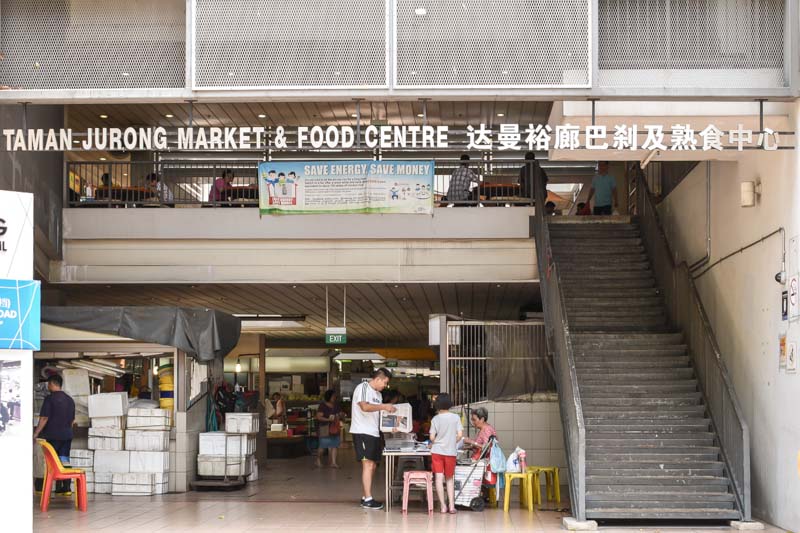 58 Minced Meat Noodle 五十八肉脞面 is located within Taman Jurong Market & Food Centre. I have to admit, even by Westie standards, it’s a little ulu. The closest MRT station is Lakeside, and you’ll still need to take a bus, so it’s not the most accessible.

But if you do manage to make this ‘journey to the West’, you’ll be amazed by the variety and number of stalls there are in the food centre. With over 100 food stalls in this three-storey building, I only wish I had enough stomach space to try them all. Head all the way to the third floor via escalator, and you’ll find 58 Minced Meat Noodle. Manned by second-generation hawker Mr Ang, the stall had a queue even during off-peak hours at 10.30am.

One thing that really makes or breaks a bowl of bak chor mee isn’t the noodles or any of the ingredients, but the chilli. Personally, I really enjoy a spicy kick in my dishes, so I’m all for 加辣 (more chilli).

I decided to order two bowls, one with chilli and one without, to see if there was any difference. They offer three sizes: Small (S$3), Medium (S$3.50) and Large (S$4). 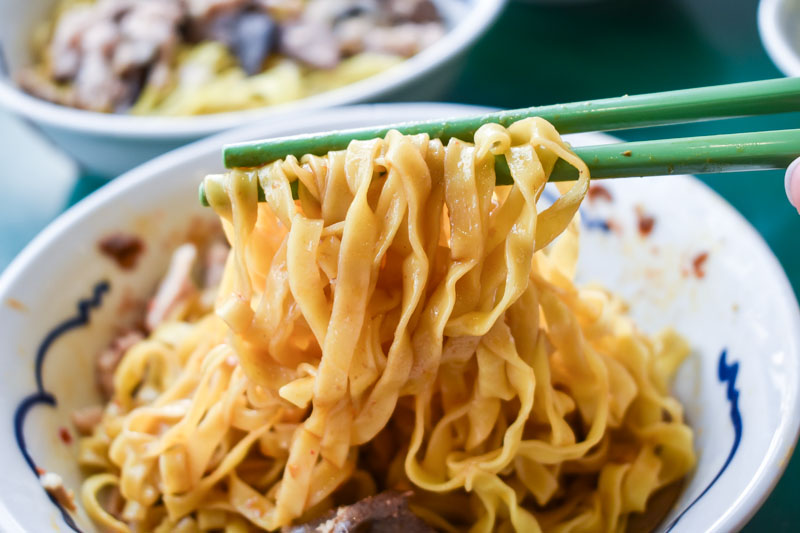 You can choose from the usual selection of noodle types, but I always go with mee pok (flat yellow noodles) in my bak chor mee.

The flat surface of mee pok means that each strand can hold more sauce, making every mouthful even more flavourful. I really liked that the noodles weren’t too soft, with enough bite for each mouthful to be chewy. What I noticed was that 58 Minced Meat Noodle is very generous with the ingredients. Just look at how much minced meat, ter kwa (liver) and pork slices they give in one bowl!

I started with the bowl without chilli, to see if there was any difference without the heat. This non-spicy bak chor mee came with a simple tangy tomato ketchup, but it was surprisingly addictive. Without the spicy kick from chilli, I could slurp down the bak chor mee much faster. However, it wasn’t as satisfying, even though it was a solid bowl of noodles.

The bak chor mee with chilli, however, was something I’d come back to Taman Jurong for.

The chilli sauce itself was really yummy, with a strong umami flavour from the dried shrimps used in it. While it wasn’t as spicy as I thought it would be, the heat spread nicely in my mouth and down my throat as I was slurping up the noodles. 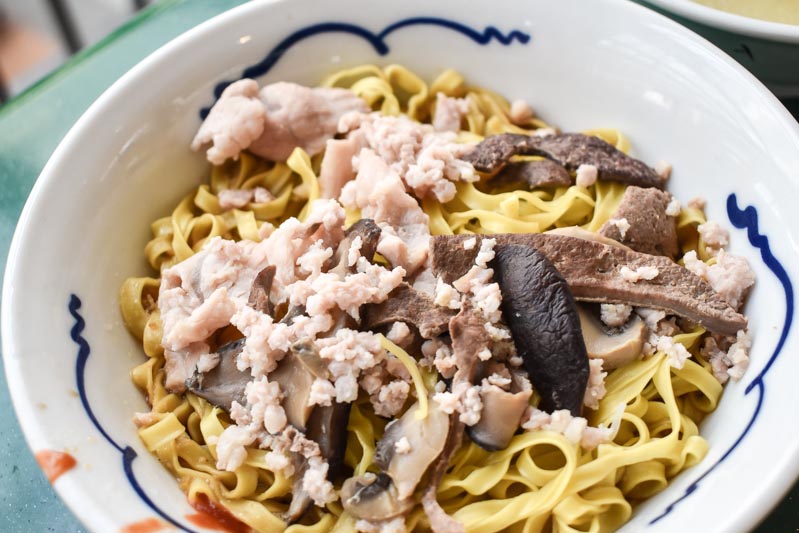 One thing that’s pretty special about the bak chor mee from 58 Minced Meat Noodle is that they sautée the mushrooms instead of stewing them. You actually get a few different types of mushrooms as well, including both canned champignons and the usual shiitake mushrooms. 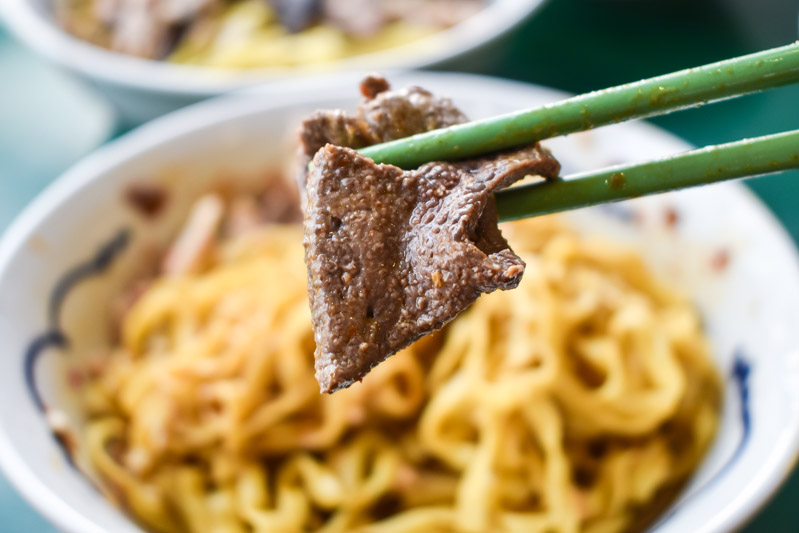 My favourite ingredient of any bak chor mee dish has to be the liver. It’s one of those things that people either love or hate, and I absolutely love it. At 58 Minced Meat Noodle, the liver was creamy but still chewy, with a lingering gamey aftertaste. They also gave a generous portion of liver, so I was content. 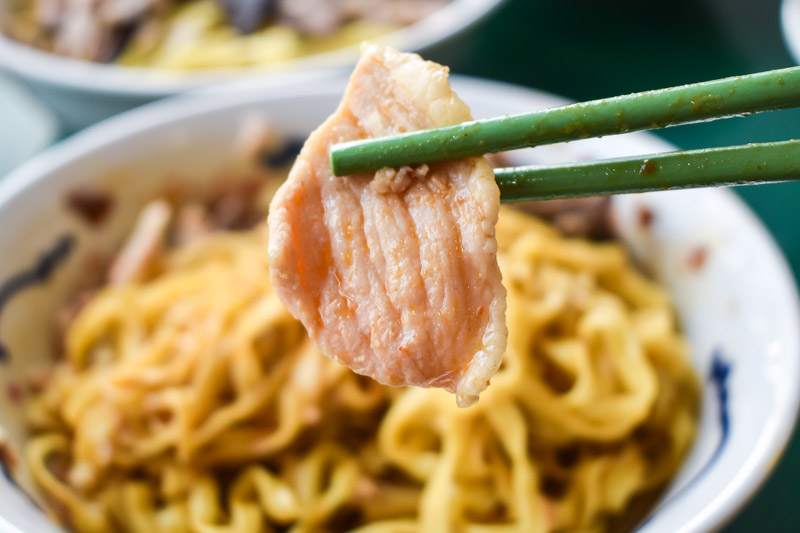 The pork slices were tender and juicy and managed to absorb a fair bit of the chilli sauce. There were quite a few slices so you’re really getting bang for your buck. 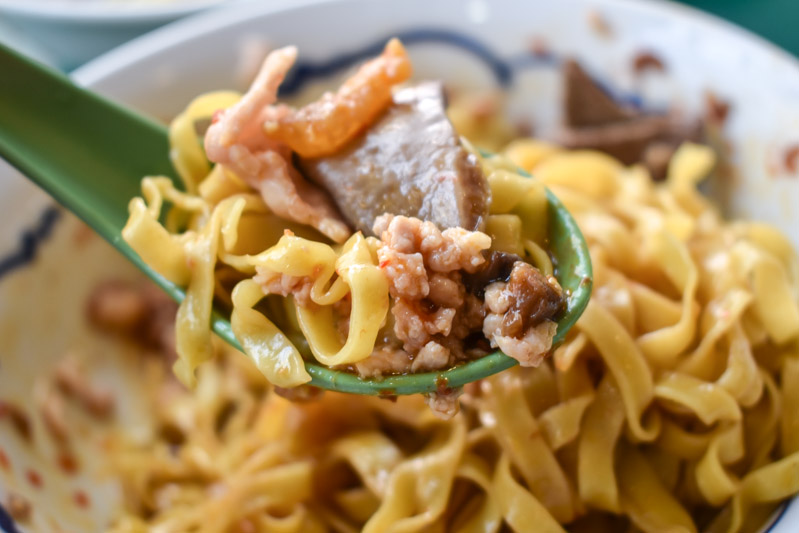 If you want a bit of everything in one mouthful, you can pile the mee pok and ingredients onto your spoon for a delightful scoop. Be sure to mix the minced meat with the sauce first, so that it’s full of umami goodness. 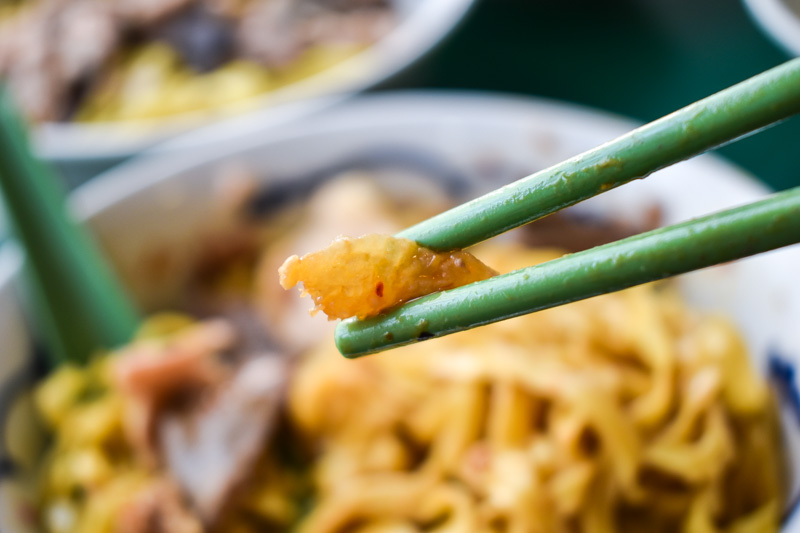 Another thing I liked was that they didn’t skimp on the pork lard. Health aside, these little nuggets of greasy goodness are what made the bak chor mee so good. The crunch also added more texture to the dish.

58 Minced Meat Noodle may only serve up one dish, but they certainly do it well. I’ll definitely make the trip down again to scarf down a bowl of their delicious bak chor mee.

And I’ll make sure to request for a bit more chilli, too.

Previous articleGuide To Budapest: A 4D3N Itinerary To Soak In All The History & Culture Of This Hungarian Capital
Next articleYou Peng Noodle Dumpling House, Bt Timah: Intricate dumplings less than S$1 each