Abu Mubarak Mandi Rice was established in 2011 and serves Middle Eastern food, particularly in the Hijazi region. This stall grew from doing food deliveries from the comfort of their own home to opening up a stall in Bedok Food Centre.

Where there is hummus, there is me, so I decided to give Abu Mubarak Mandi Rice a try and perhaps have a mandi after that. 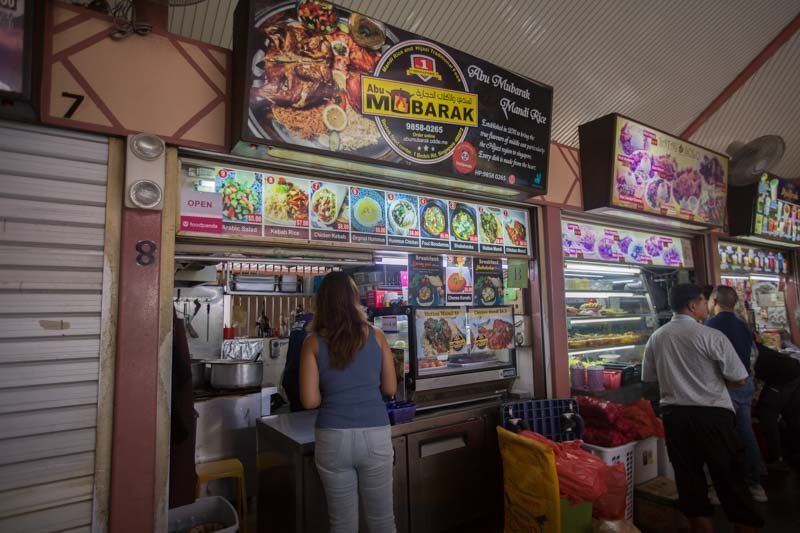 I couldn’t help but notice the accent from Mustafa, the owner of the stall. Not wanting to commit a faux pas, I didn’t want to ask where he was from. As it turns out, he used to live in Saudi Arabia for 40 years and his cooking style is influenced by the region he grew up in. The food is prepared daily and fresh. I was particularly interested in their Mandi Rice, a traditional dish from Yemen that comprises of meat and rice cooked with spices.

Mandi in Malay means to ‘have a shower’ and initially when I saw the menu, I assumed it has something to do with a shower, perhaps a metaphor for gravy showered over rice. But the word “mandi” derives from the Arabic word “dew”, which represents the moist from the meat. 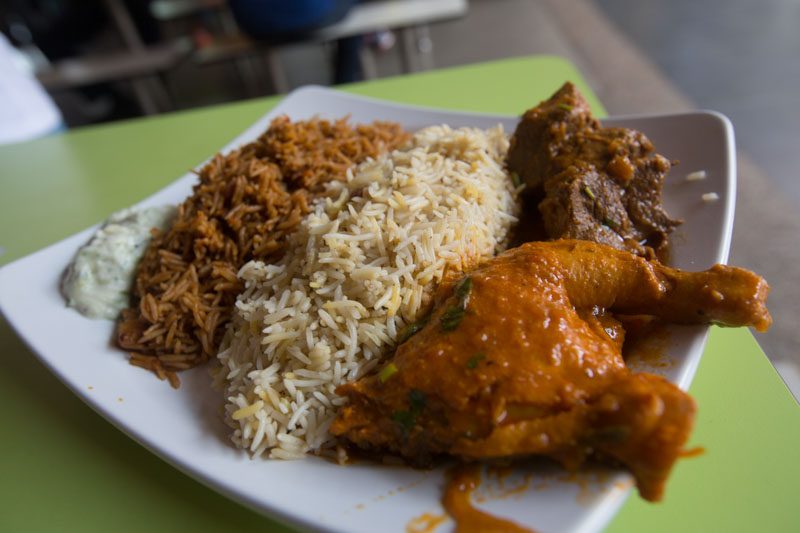 The Chicken Mandi Rice (S$6.50) comes with thick, succulent chicken bathed in gravy that is akin to curry. The chicken is tender and juicy and you can taste the elaborate spices of cardamom, cloves and cinnamon in it. What I enjoyed about the chicken is that it is spicy and got me sweating in my seat.

Served on the same plate, we tried the Mutton Mandi Rice (S$8) too. The meat was well rendered in its delicious and thick sauce. The mutton was aromatic and the meat was lean and tender without being gamey. 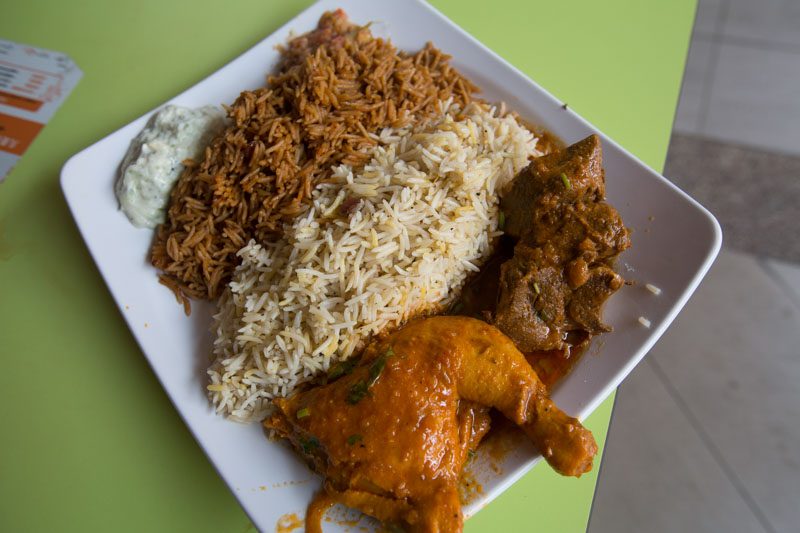 Moving on to the rice, we tried the signature Mandi rice and the Kabsa rice. Essentially, smoked basmati rice interspersed with raisins that gave it a subtle sweetness.

The Kabsa rice, which is darker in colour, tasted nuttier compared to the mandi rice. Because of its striking yellow colour, the Mandi rice reminded me of briyani and it even has similar taste to it.

The tahini yoghurt that came with the dish is an interesting palate cleanser. It might be too creamy and zesty on its own, I recommend having it with the rice to nullify the spicy chicken. The Hummus Chicken (S$6) comes with pieces of savoury flatbread that are thin and tears off easily like paper.

For the price, I would have preferred if they were more generous with the amount of bread served. Three thin pieces were too little to fill me up. The hummus tasted fresh, creamy and made the dish “fuller” with its thick consistency. However, the chicken seemed to be just an add-on or an afterthought. Perhaps, you could just order the hummus, it tastes good on its own. 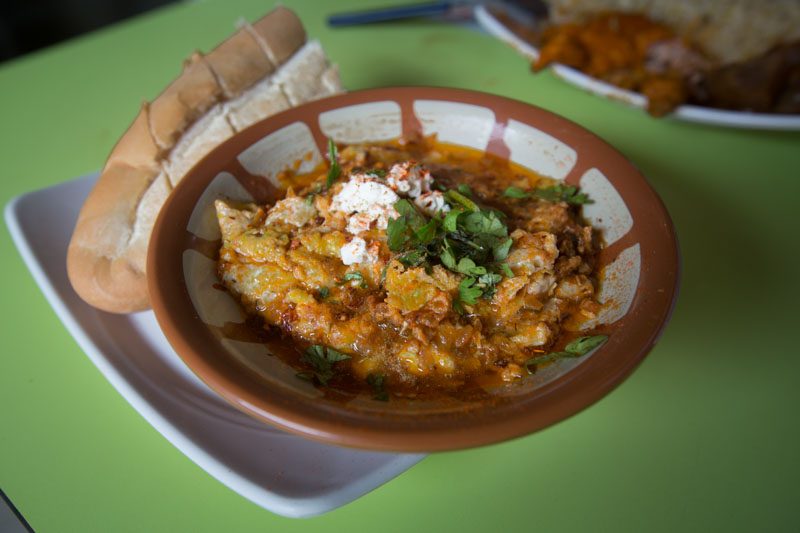 One of the hidden gems of this stall is the Shakshouka (S$5) and we couldn’t stop stuffing ourselves with it. It contains eggs poached in a tomato sauce filled with onions and peppers.

It was not as spicy as I thought it to be and the mild sweetness of the ricotta cheese went well with tangy sauce. The dish is served with a warm baguette to mop up the sauce; it was simply divine! I had high hopes for the Cheese Kunafa (S$6) as I love a good dessert to end off the meal. But I was left sorely disappointed, it wasn’t sweet as I had liked it to be.

Mustafa mentioned that some of the dishes, including the Cheese Kunafa, were tweaked and toned down to suit our local taste buds. 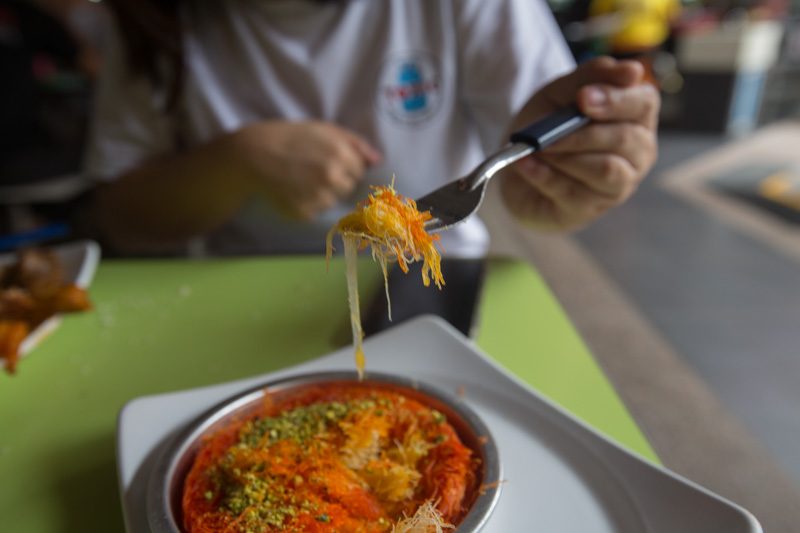 The cheese does not have the “pull-effect” when I held it up and the sweet syrup that was supposed to accompany this dish was mellow. I would have liked it better if the syrup was served at the side so we can adjust the sweetness accordingly.

As a cheese lover, I thought the portion of cheese in this was too little. There is room left for improvement and hopefully, it will taste better the next time I come back.

The Mandi rice at Abu Mubarak Mandi Rice is unique and I have not tasted anything like it before. You could tell that Mustafa was serious in his cooking just by the twinkle in his eye while preparing the food.

If you want something different from the usual hawker food, give this place a visit and be surprised. Now, there is one more stall to check out at Bedok Food Centre!

Previous articleAmber Ember: Australian Jaffles & Asian ‘Risotto’ At This Quaint Little Cafe Near Serangoon
Next article10 Dining Deals To Get You Excited For Singapore’s Biggest Online Food Festival From 1 – 5 Oct