Bedok, the old and lively estate in the East, is also a neighbourhood with various hawker centres filled with famous and delicious food. We ventured into Bedok North Blk 216 Market to find out what exactly caused the Bedok residents buzzing. 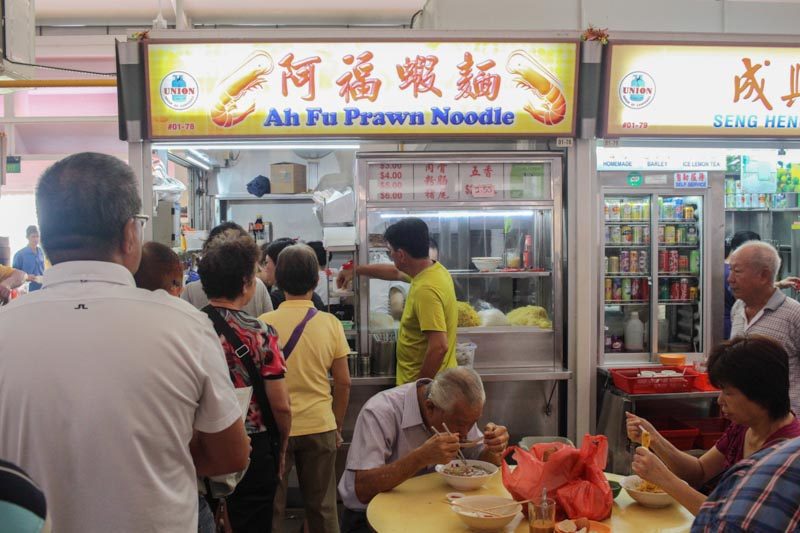 After asking around, we found out that Ah Fu Prawn Noodle usually sells out before 12pm, so we went down super early the next day. Service was very swift despite the long queues, and it was our turn within 10 minutes although there were nine people in front of us. We ordered both the soup and the dry version to see how they would compare. 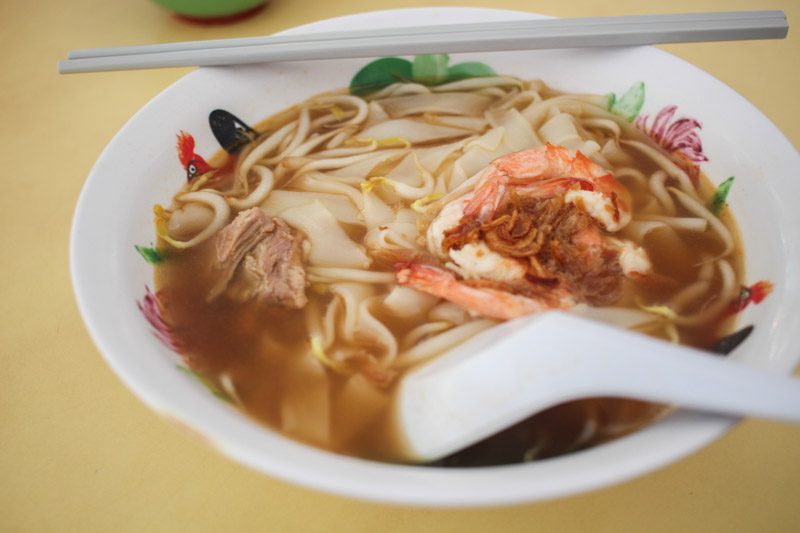 We had the smallest size of the Soup Prawn Noodles ($3), with kway teow noodles. It was quite a big bowl for $3 with a generous amount of kway teow and quite a bit of taugeh, so do tell them to exclude it if you are not a fan of bean sprouts. 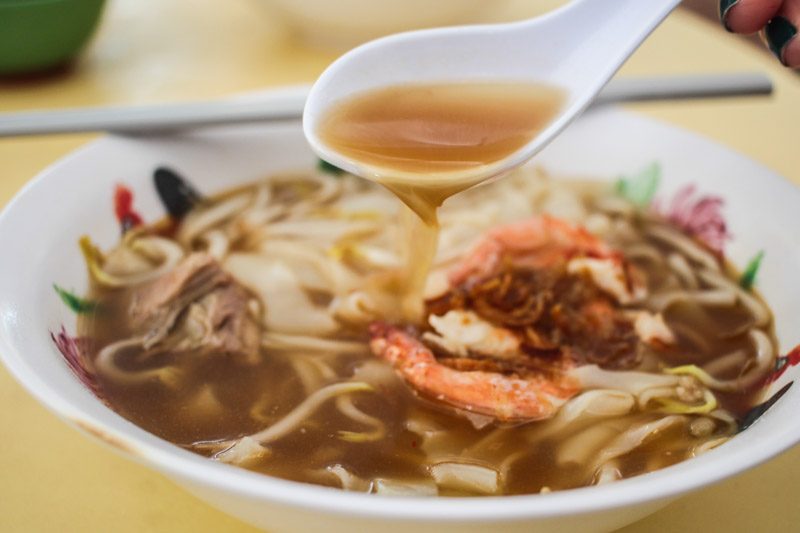 The soup served was a lot lighter tasting that other prawn noodle stalls, with only a slight prawn taste coming through at the end, and the fried shallots adding more umami flavour to the soup.

The bowl of soupy prawn noodles was slightly towards the bland side, so if you like your food lightly seasoned, this bowl will be perfect for you! 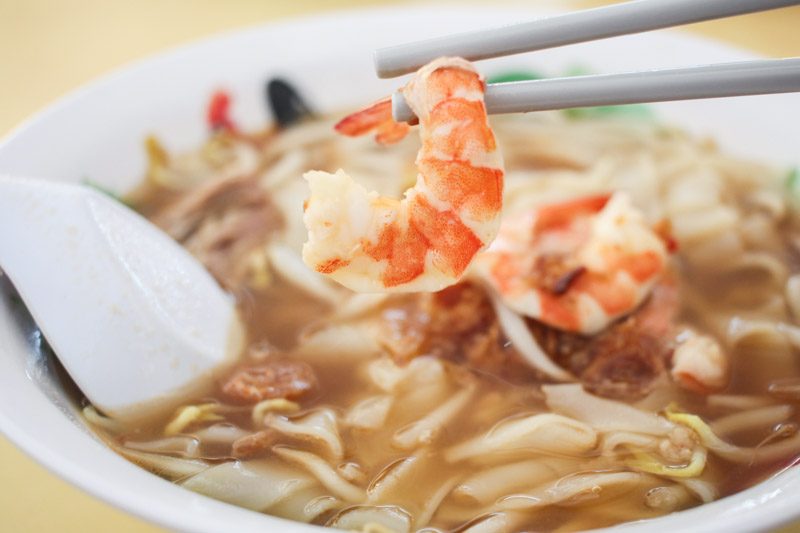 There were four prawns in the bowl that were sliced into half, so technically we only had two full prawns. The prawns, however, were super fresh and not overcooked. They had a good bite and complemented the soup well. The kway teow was cooked perfectly and was springy and smooth. The best way to savour this bowl of prawn noodles, in my opinion, is to have a bite with everything — the springy noodles, crunchy taugeh, fresh prawns, and a bit of the piping hot soup. 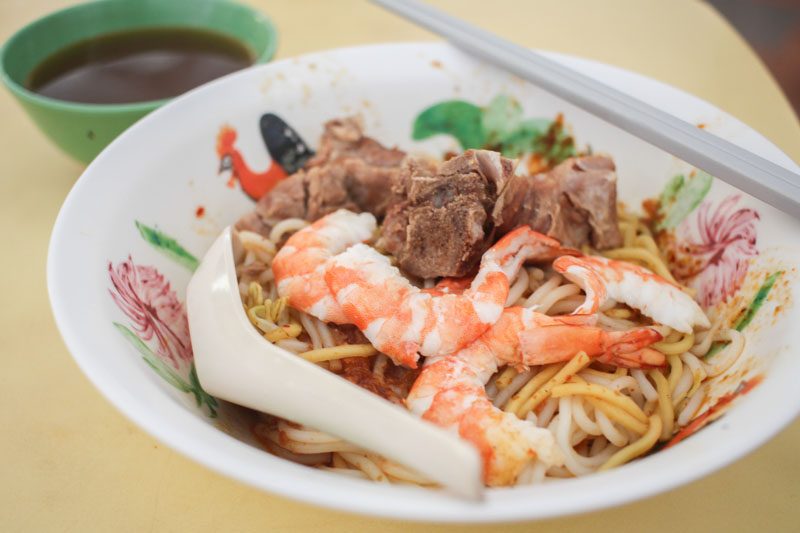 I have always preferred the dry version of noodle dishes more, and this bowl definitely did not disappoint. We added Pork Ribs ($1) to this bowl of Dry Prawn Noodles ($3). 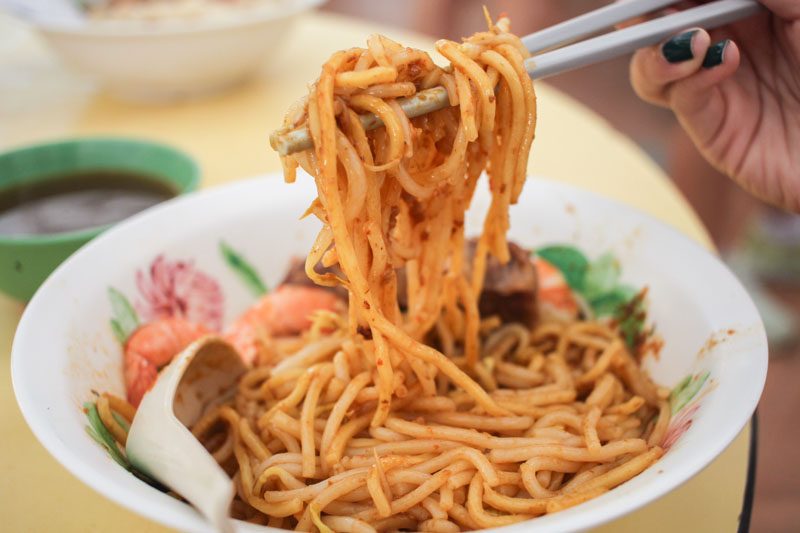 We asked for bee hoon but realised when it was served that the stall uses the white thick bee hoon you get in laksa, mixed together with some yellow egg noodles. The noodles well-cooked, QQ and the different textures of the noodles made this bowl extra enjoyable.

The noodles were tossed in the perfect amount of chilli sauce that packed a punch; it was too spicy for me, but the chilli was too fragrant for me to stop. 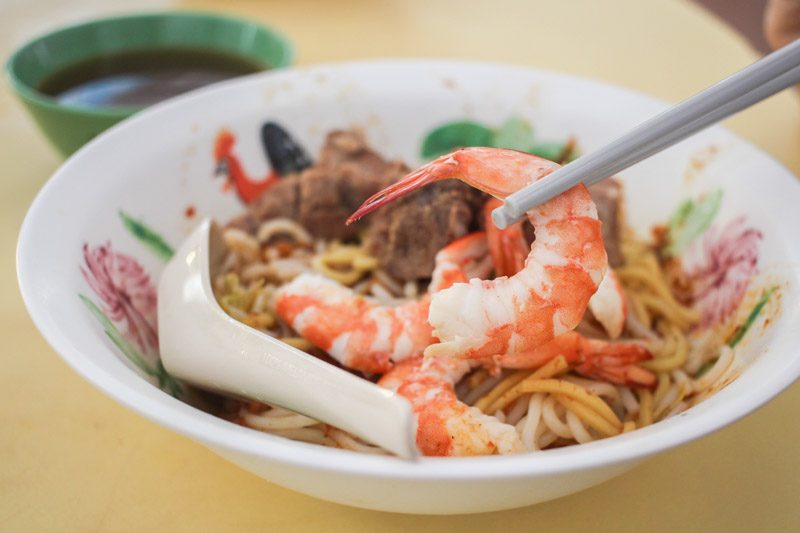 Like the soup version, this bowl came with four prawn-halves. The prawns here were bigger than the ones in the soup, and I wonder if this is just a coincidence or a recurring incident.

Perhaps it was because of its bigger size, but the prawns tasted sweeter and had a better bite in this bowl. 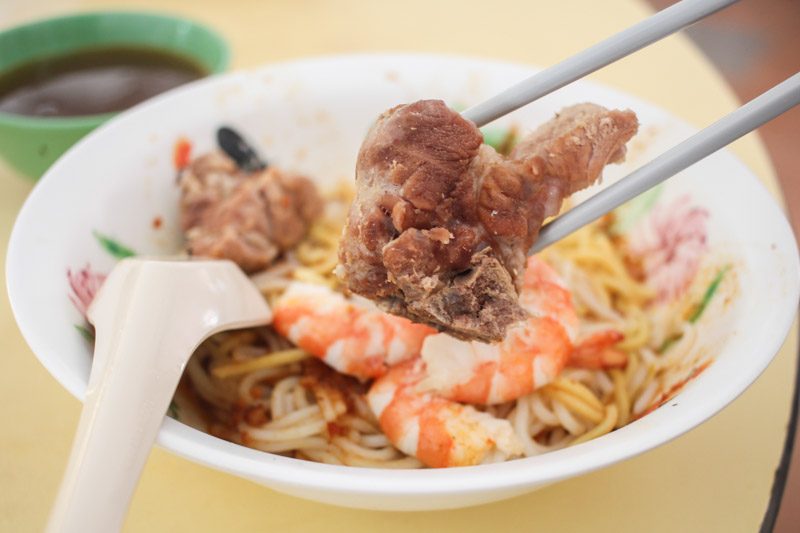 The pork ribs, on the other hand, were disappointing. They were dry and tough, without much flavour. We thought that the pork ribs would have been better if cooked for a longer time for a fork-tender texture.

Although Ah Fu Prawn Noodle sees long queues every day, the prawn noodles here were not the best we have tasted in Singapore. However, at merely $3 for the smallest bowl, we can see why many residents return for Ah Fu’s prawn noodles.