As the resident Westie on the SETHLUI.com team (almost everyone else stays in the East or North), I have to say that Taman Jurong Market & Food Centre can be too far even for me.

On one of my recent jaunts to the food centre, I decided to try something a little different from the usual lor mee/congee/bak chor mee dishes. Western food stalls in hawker centres often offer your standard Hainanese-style Western dishes with grilled pork chop, chicken cutlet and the like. ButterNut, on the other hand, spices things up with its thin-crust pizzas and burgers. Plus, this stall is halal-certified too.

Alas, they were fresh out of burgers when we visited, so we settled for four different pizza flavours instead. Lest you think I’m a huge glutton—not too far off base, really—each pizza was slightly bigger than the combined area of my two palms, with really, really thin crust. The hand-crafted, eight-inch crust actually takes them seven minutes to make each time.

ButterNut has also come up with an easy, innovative marketing tactic: everyone who ‘likes’ their Facebook and Instagram page is automatically a member, and members can get 30% off!

Before we continue, pizza purists might want to look away, because the flavours here are hardly authentic nor mainstream. 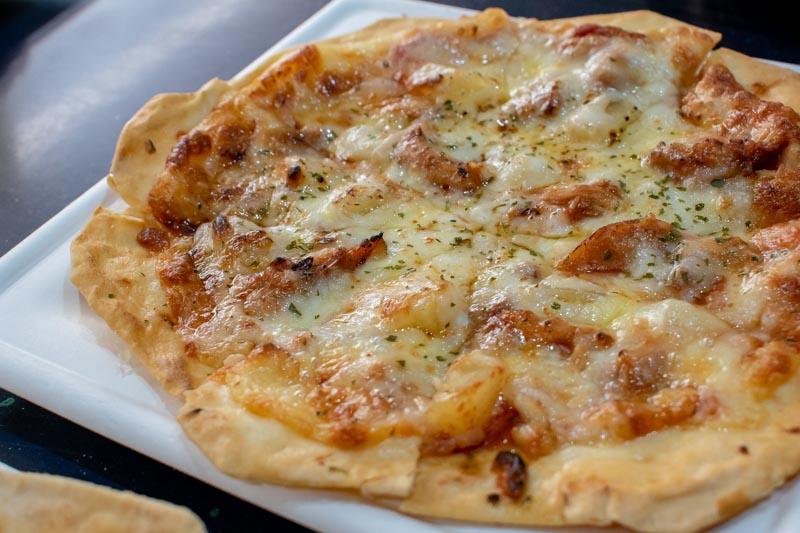 The Balinese Pizza (S$11.30/non-members, S$7.90/members) probably seems the most familiar, considering it’s a riff off the classic Hawaiian pizza. Yes, pineapple-on-pizza haters, I hear you.

This rendition brings a little more pizzazz to the classic—instead of chicken ham, the Balinese Pizza comes with BBQ marinated pulled chicken. There’s the slightest sprinkling of parsley atop the mozzarella cheddar mixed cheese as well, for a hint of mild bitterness. The BBQ chicken chunks were tender, with hints of smoke to complement the piquant notes. Acidity from the pineapple bits certainly helped to brighten each mouthful.

I wouldn’t say there’s much of a cheese pull, though the cheese was chewy and creamy enough. The cheese definitely did a good job holding the other ingredients on top of the crust, considering how thin the crust was. 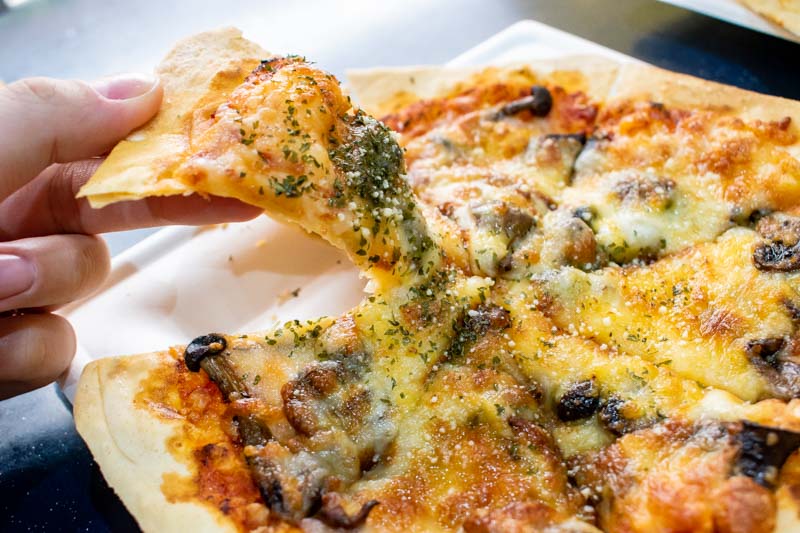 The Mushroom Truffle Pizza (S$11.30/non-members, S$7.90/members) was surprisingly good, considering that I find truffle a little trite these days. While truffle is usually a fairly expensive ingredient, most hawker stalls which offer truffle anything tend to use the cheaper alternative, truffle oil.

I got a whiff of faint truffle fragrance from this pizza, which was grounded by the juicy, earthy mushrooms. A mix of European white button mushrooms and Korean shimeiji mushrooms come together with mild, nutty notes, and the slightest bittersweet finish. Instead of the usual proteins like chicken or ham, we also tried the Smoked Duck Pizza (S$11.30/non-members, S$7.90/members). I personally prefer duck to chicken—the flavour is more robust, with a gamier edge.

This was a decidedly Asian take on pizza. Aside from the smoked duck slices, the pizza came with honey mandarin duck sauce and roasted sesame seeds. I would’ve liked the duck to come in chunks instead of slices, for more bite, but it was still a decent pizza. 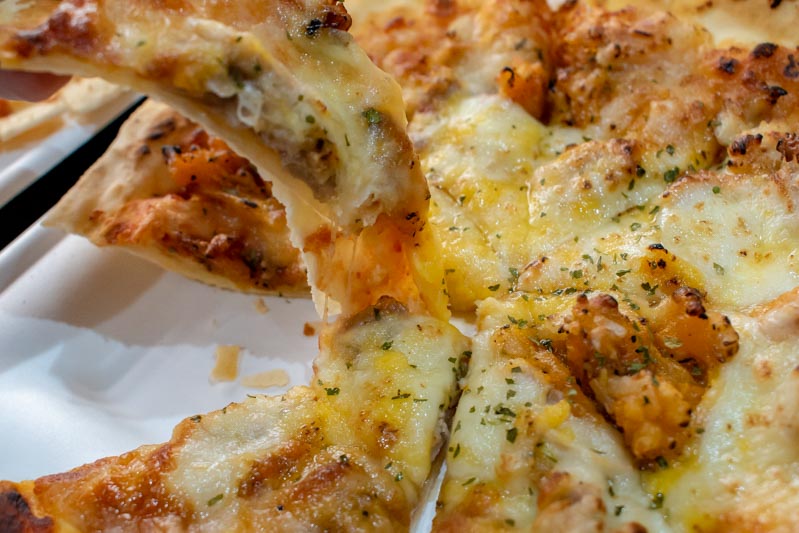 For my last pizza, I had to get the signature ButterNut Chicken Pizza (S$9.90/non-members, S$6.90/members). Oven-baked chicken slices and roasted butternut chunks covered the pizza, with rosemary sprinkled on top.

If you’ve never had butternut before, it’s sweet and nutty—like a milder version of butterscotch, if you will. That, together with the well-marinated chicken and the crisp thin crust pizza, is a recipe for a lovely meal. I wouldn’t want to share this!

ButterNut is a homely Western fusion stall that does pretty great thin crust pizza. If I happen to be in the area next time, I wouldn’t mind popping by for another taste of that ButterNut Chicken Pizza.

I’d recommend bringing a friend or two along, just so you can try more of the pizzas.