Is the customer always right? The case of Ken Lim vs Arun Ratnaa

I first came to notice this whole spat online because my site was getting traffic spikes from my review on Don Quijote Spanish restaurant. So I checked the search terms and realized a significantly high number of people were searching for Ken Lim on google.

Not the typical search volume for this restaurant I thought to myself, perhaps Don Quijote was running a promotion? So I went to snoop around to see what I could learn that was giving Don Quijote a traffic search boost, maybe I could learn something valuable as a F&B marketing consultant.

Lo and behold, I found out that there was some kind of online spat between Arun Raatna, Shiraz Marketing Manager, and Ken Lim, owner of Don Quijote.

Arun Raatna had supposedly gone to Don Quijote at Dempsey, been refused a seat even though there were plenty (duh heard of reservations?), took offense at the staff’s reply and wrote an email about it to Don Quijote’s owner, Ken Lim.

It all went into viral mayhem when Arun Raatna posted on his public Facebook wall, Mr Ken Lim’s email reply that included an expletive, but not to forget his sincere warmest regards to go along with it 🙂 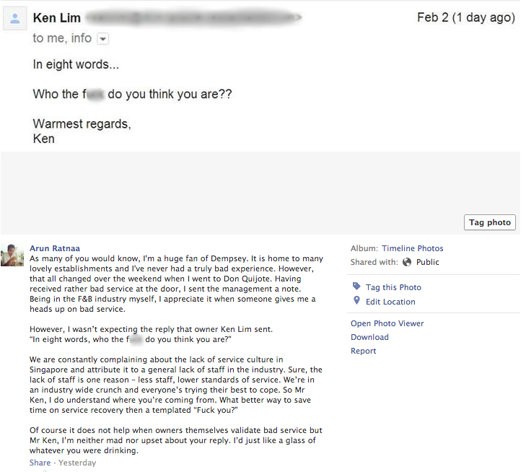 Attached is the screenshot of Ken Lim’s email, as well as Arun Ratnaa’s claims. As with all media manipulation, just presenting selected frames can easily influence the public’s perception. Then Ken Lim shot back via his restaurant’s facebook page: Which is a reasonable response given someone was trying to publicly shame his restaurant. And as retail owners, you have no idea the lengths we will go to protect our business. It’s like someone insulting your own baby- expect a strong emotional response with a sledgehammer.

Now that we’ve presented the facts, I want to assess this objectively. Before that, my disclaimer is that I have indeed been invited to a tasting at Don Quijote Spanish Restaurant at Dempsey in the past, and I’ve conversed with Mr Ken Lim. We are by no means close friends, and I’m not paid or obliged to defend him.

Yes, I agree that responding to a customer email with vulgarities is definitely one of the cardinal sins of service hospitality. Ken Lim could have dealt with that a lot better. However, there is a limit to any customer’s unreasonable demands, like asking you serve them pork in a halal restaurant. And I believe it is any restaurant’s right to refuse service to inhospitable guests.

Judging from Ken’s Facebook reply, it was the email that Arun sent him that set him off like that. Perhaps it was also because Arun used his corporate email with his job title and position, that evoked a ‘holier-than-thou’ perception.

Ken Lim also suggests that his staff were at no point rude to Arun, who instead became upset about not getting a seat inside. Not being able to get a seat is hardly worth getting riled up about no?

What is unknown is the alleged ‘bad service’ Arun received at the door that the staff gave him. No known documented articles reveal the details.

At this time, we have no access to the exact email that Arun Raatna sent initially that triggered such an explosive reply. Neither party has been willing to release this email that completes the story, which suggests fault on both parties. We can’t be sure until someone is willing to publish the full story, and not just selected bits that make either party look like the victim.

Publishing Ken’s email reply complete with name and restaurant on Arun’s public Facebook wall seems like a really petty thing to me. If any place has bad service, you don’t dine there again. Simple. Market forces will naturally kill the business if this goes on. You shouldn’t actively shame them in public.

Being in the Singapore F&B industry himself, Arun should be well-aware that this is a very small community and word spreads quickly. This reflects badly for his own professionalism, as well as the company he works for, especially if you chose to email with your corporate email account, indicating representation.

In any lengths, I do not think anyone should be publicly deplored, which is a malicious intent leading to viral disaster. Just look at the aftermath of Singapore blogger Janice Leong, who had to take down her blog, Facebook page and deactivate her email after being publicly shamed and harassed by the public. Not to forget Anton Casey who brilliantly shamed himself on Facebook and was forced to hide in Australia.

So is the customer always right?

I will have to go with a firm ‘no’. The customer is never always right in an absolute sense.

Yes, the highest hospitality standards will go to great lengths to service a customer, and even go out of their job scope to do it. However, this service should only be bestowed upon someone who respects service staff as human beings.

In the end, it’s still a person-to-person interaction and certain boundaries have to be set. Even in war there is the Geneva Convention to ascertain off-limits humanitarian rights.

In my experience working in the F&B frontline, there are indeed customers who get offended just because you said ‘hello’ in the wrong tone. There are plenty of unreasonable, arrogant guests out there and we cannot assume a blanket rule for intentional trouble-makers. It is of course rigorous training that stops us from snapping back, which Ken Lim definitely could have responded better instead of deploying the F-bomb.

From my interactions with Ken Lim though, I sense that he has great pride and passion for his restaurant, which tends to get him riled up easily. I understand his reaction as a person to an obnoxious email, which he could have dealt with more calmly as a professional.

Arun Raatna, as a fellow F&B man, should also understand that no matter how much training, sometimes after a long day a smile can still breakdown. If you’ve worked as F&B floor, you will understand the insane hours of standing, smiling and serving without a break. We’re still human, and we make errors.

Even if the staff were truly perceived as ‘rude’ to him, which is his right to feel, it’s no cause to make a public case out of. Things happen, just let it go.

F&B owners do indeed appreciate feedback, and trust me I’ve given loads of feedback from all my food tastings. I’ve never however, seen any restaurant reply aggressively like Ken did, which really piques the curiosity of the kind of ‘feedback’ Arun gave. My personal belief is that it is always the communicator who is at fault if someone is offended.

At this point we are missing a lot of critical facts, like the email Arun sent initially, which could confirm most of the speculation. My personal opinion is that Arun Raatna is blowing things up more than he should with his Facebook post.

Unfortunately, it seems that we won’t be seeing the first email feedback that Arun sent, as neither party is willing to release it. Curious and curiouser.

*Update* Ken Lim has informed me that they will no longer partake in this online argument and will be removing all posts from their Facebook Page.

I personally think walking away from a petty, senseless argument is the most mature thing anyone can do. Can you do that too Arun?

Sold out Sake Matsuri Singapore returns — Essentials to know before...