Creamier’s recent news of their pioneer outlet in Toa Payoh closing has got many ice cream fans in tears. Well, when one door closes another opens. Just an MRT stop away lies newly-opened Denzy Gelato. Located just across the road from Bishan Interchange, Denzy Gelato makes for a convenient pitstop for students and residents living around the area. Pretty good location, but how good are their gelato’s and waffles? There is only one way to find out. Hence, I decided to head down for a taste test of my own. The shop had a minimalistic design which was well-decorated with a modern touch. Wooden furniture with dark accents and circular bar tables were the bulk of their seatings, with luminescent lightings for a pop of colour. My eyes immediately made their way to their ice cream selection, and I was slightly shocked to realise there were no typical offerings such as vanilla, strawberry and chocolate. Instead, they were all really fanciful or originals made with a twist to them.

I had a word with the owner, Damien, who shared with me that he always had a passion for food and loved experimenting with culinary techniques. He chose to do gelato as he felt it was something he could control in all aspects. Striving for only the best, he went to Italy to pick up the skill. As of now, he does everything on his own, with his ingredients made from scratch and gelato freshly churned in-house. I decided to go for Waffles (S$5) with a Triple Scoop (S$3 per scoop, +S$1 for premium flavours) as there were too many interesting flavours for me to only pick one or two. It did not take long despite it being made-to-order, and I was pleased that the scoops were substantial in size. Pretty worth its price in my books. 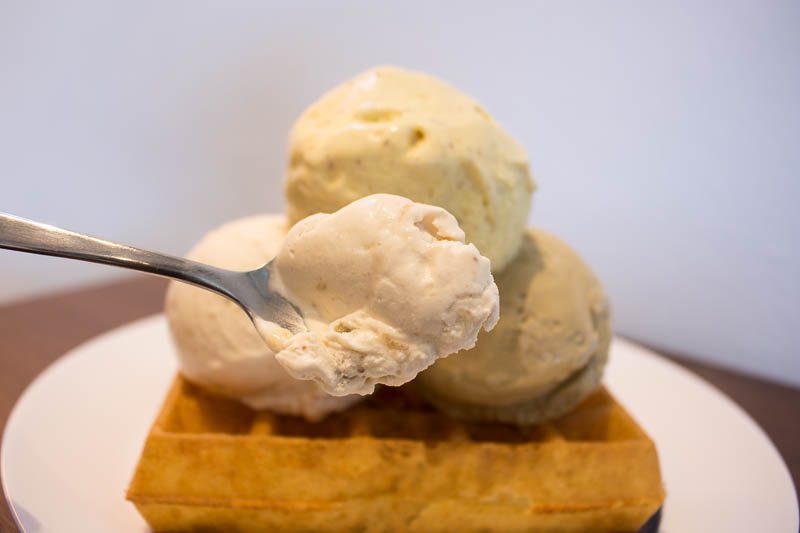 I decided to try the gelato first, and I was the most excited about the Peanut Butter and Banana. Those who know me would know that peanut butter is one of my absolute favourite things in the world, and I am picky about their quality.

I was pleased that the peanut butter was rich and intense, with a wholesome nutty flavour. Several places that I have been, disappointed me with their mild or even artificial peanut taste. The gelato itself was extremely smooth and dense, with lil’ chunks of banana and cacao nibs for texture. I liked those additions which provided a nice bite and crunch.

It also helped cut through the lusciousness of the gelato. 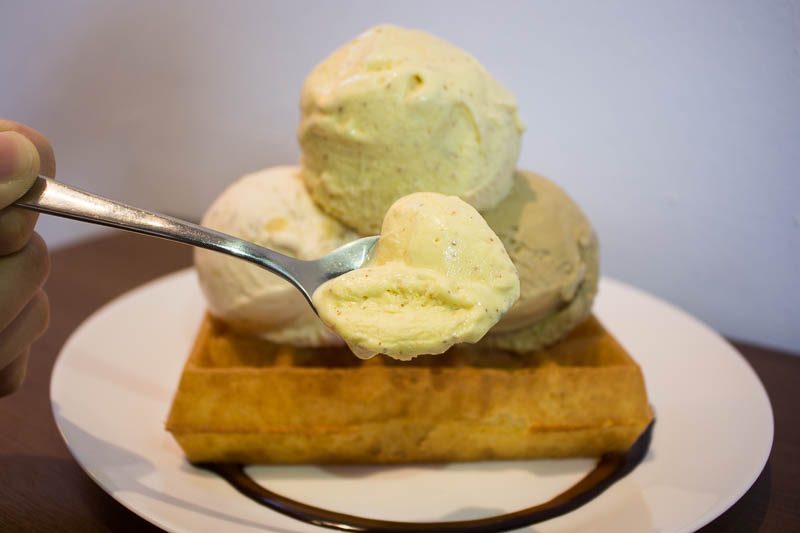 The second flavour we got was the Persian Prince, inspired by Damien’s travels to Italy. It was made with almonds stone-grinded for at least 10 hours and saffron. This intrigued me as I have never had saffron in gelato (or ice cream for that matter!). It is an expensive spice that is usually used in savoury foods. When I tasted the gelato alone, I was unsure whether I liked it.

It was indeed different, but I could not put my finger to its exact taste. I tasted a hint of honey, which was probably derived from the subtle flavour from the saffron. Whatever it was, it did complement the almonds so the combination did work. This flavour was slightly lighter too, for those who may not like rich gelato. 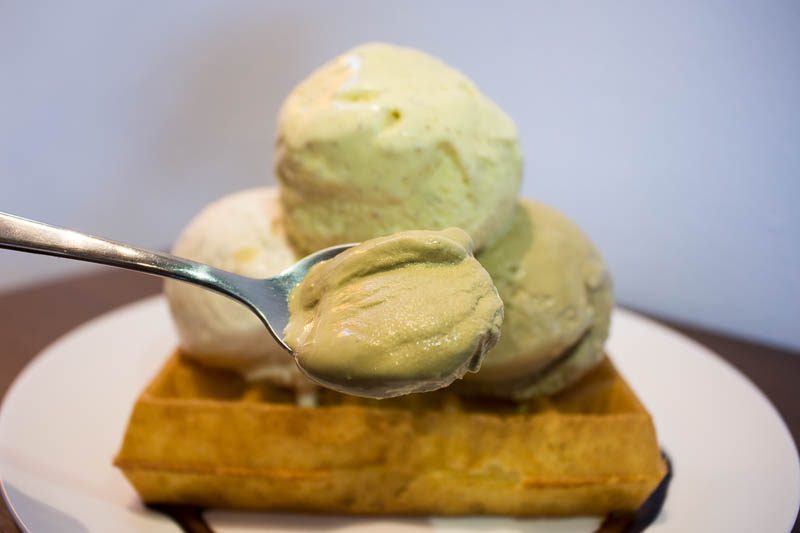 The last flavour we got was Hojicha. I’m not the hugest fan of hojicha tea, but this was good. There were elements of its typical earthly roast, with the similar full-bodied creamy consistency that I appreciated. It was well-balanced, neither overly sweet nor bitter. However, for those who love a distinct tea flavour, this may disappoint you. The waffles came piping hot, so light and crisp as I cut into them. Damien shared with me he made them that way as people usually come after their meal. Such waffles would be less heavy on their stomachs. Indeed, they were airy and easy to eat which complemented the rich and creamy gelato’s of our choice. In particular, the Persian Prince went together perfectly with the waffles. I’m not exactly sure what was the turning point, but it was a nice balance of sweet and savoury, hot and cold that made it so enjoyable.

My dining partner who felt that the Persian Prince was too odd for his taste buds actually finished it with the waffles. I did like the waffles but personally, I prefer chewier and denser ones that give me a greater sense of satisfaction whilst having them. As we finished our gelato waffle tower, we decided to get a single scoop of Elderflower Mojito Sorbet (S$3.60 for single scoop, +S$1 for premium flavours). This was inspired by Damien’s trip to Bali and I could see why. In Bali’s hot and sunny climate, this would have been so refreshing. It was light and zesty from the lime, which was a great palate cleanser after the heavier flavours that we had. 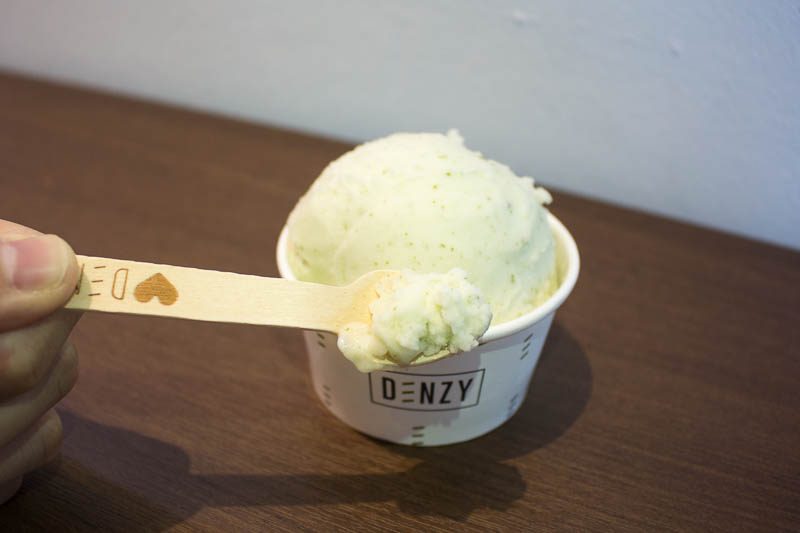 The gelato flavours here do vary from the usual ones that you are familiar with. But give it a shot, you never know whether you will like it or not. While I feel like some of the flavours still need minor tweakings to get them to their desired taste (from the ones I sampled), the ones that I had were really good.

Head down to Denzy Gelato if you are in the area and feeling adventurous for some unique offerings.

ChopeDeals: Save 50% at Denzy Gelato >