Laksa, as we know it, is often served in a bowl, either with long strands of rice noodles, or cut up so that we can eat with a spoon conveniently. What about claypot laksa? 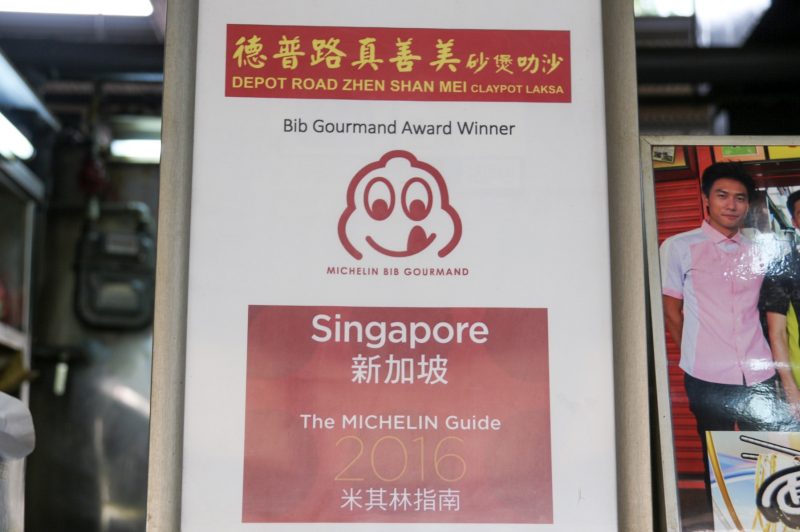 Depot Road Zhen Shan Mei Claypot Laksa became renowned after being awarded the Bib Gourmand award in 2016, and subsequently in 2017 and 2018. 2019 marks the 4th year that the stall has snagged this coveted award.

What is the Bib Gourmand award? The Big Gourmand award is given to restaurants and street food establishments that offer quality dishes at a maximum price of S$45. Despite it being located at Alexandra Market now, it was initially situated at Depot Road, hence the name Depot Road Zhen Shan Mei Claypot Laksa. The original owner, Madam Ang Siew Yan, sold laksa in claypots for over 10 years at Depot Road before retiring for about six to seven years due to her ailing health.

Her nephew, Mr Zhang, took over the mantle and learnt the recipe from scratch. He did not want to see his aunt’s stall just vanish. Ever since, he has been running the stall. 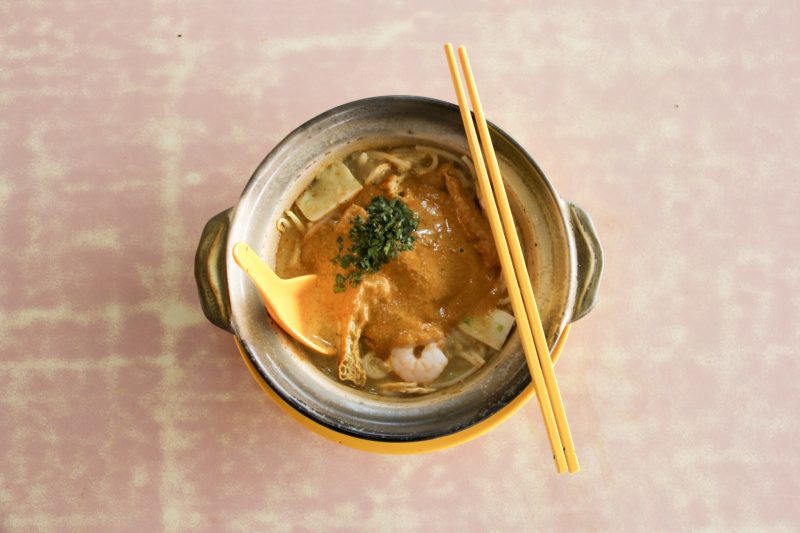 A humble bowl of Claypot Laksa is priced at S$4 for a small, S$5 for a medium, and S$6 for a large. You can also supplement your bowl with additional ingredients according to your liking. Additional noodle and gravy costs S$0.50 each, while an extra serving of chicken, fish cake, tau pok and prawn costs S$1 each.

Another unique ingredient in laksa is also cockle, commonly known as hum. You can get an extra serving of that at S$2.50.

A humble bowl of Claypot Laksa, although it looks simple, it was extremely comforting despite our sweltering heat. Every component seemed to work harmoniously together. From the thick rice noodles, to the tau pok, to the little details like a sprinkle of laksa leaves. 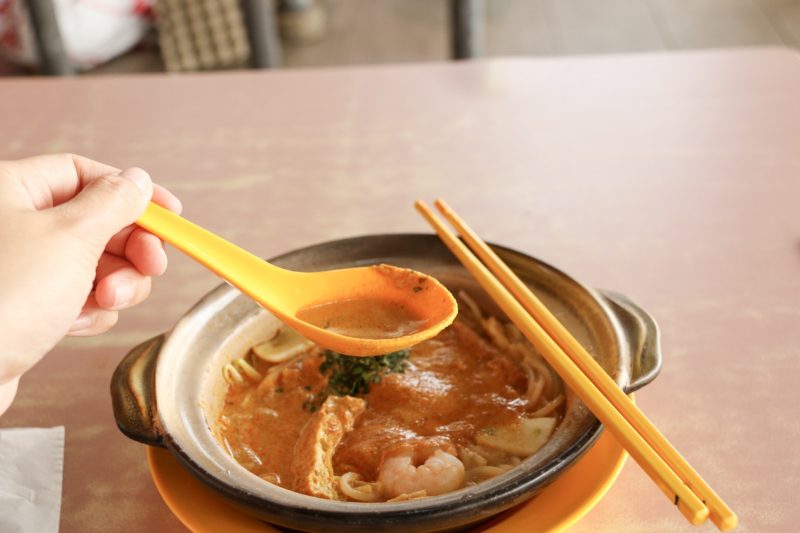 My baseline thoughts were that it looked like an average bowl of laksa—nothing extraordinary. But what really made the dish stand out is the claypot. Everything tastes better in a claypot, in my opinion. Even laksa.

Somehow, the slightly charred—from consistent use—porcelain bowl was able to enhance the flavour of an already delicious bowl of laksa.

The laksa broth was thick and packed so much flavour that even when I was done with the noodles, I was still drinking the soup. For someone who rarely drinks the laksa broth, even I surprised myself when I was enjoying it. It also had the perfect spice level which I gladly indulged in. 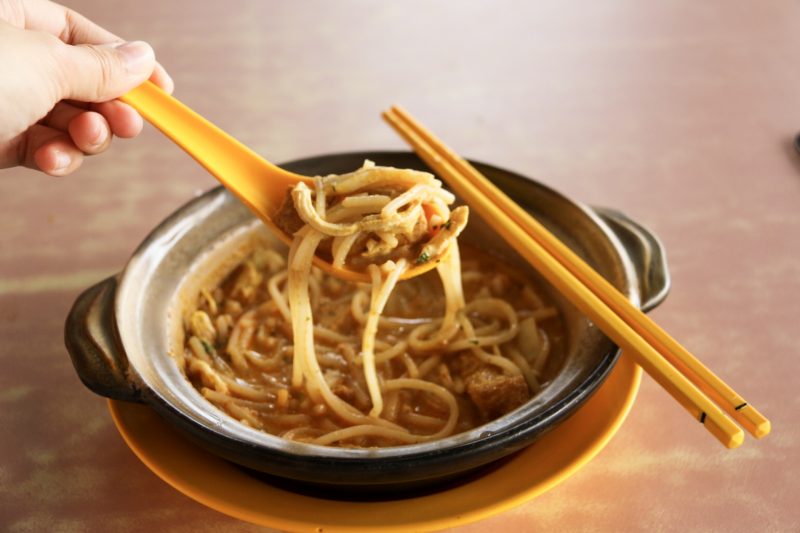 Now, apart from the broth, another important component of a laksa dish is the noodles. In my honest opinion, rice noodles are the perfect carrier for laksa broth. It was able to soak up every single ounce of flavour and had the optimal bite.

Along with the beansprouts in the dish, it created an incredible harmony of flavour and crunch in a bite. 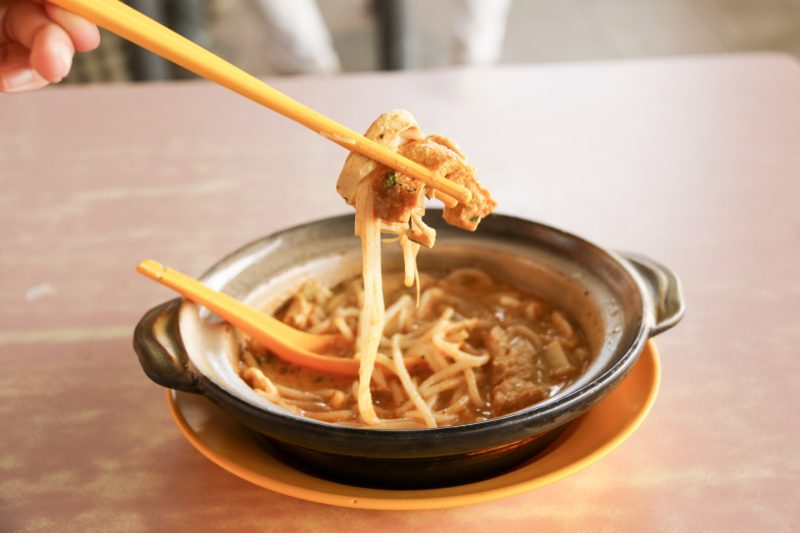 My favourite part of laksa is also the tau pok. If you do not know what tau pok is, it is a fried beancurd that is quite flat and has a spongy centre. I personally coined it as a “food sponge”, because it easily absorbs any flavour of broth it is immersed in. In fact, when I saw this pot of tau pok at the back, I was so tempted to ask Mr Zhang to just serve me the laksa broth and tau pok.

The price point for the Claypot Laksa is also very reasonable, considering the amount of effort it takes to make the dish. 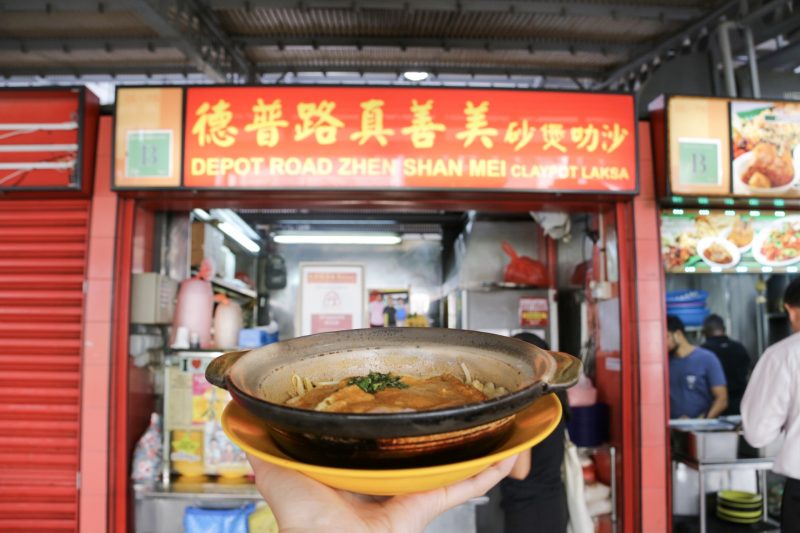 This was indeed a satisfactory meal for me. I went down early in the morning and was hoping to be the first customer in line. However, there were already people queueing prior to my arrival, and the store had yet to open! If this was the breakfast situation, I could only imagine the lunch crowd.

Have you tried this Bib Gourmand Claypot Laksa stall? We’d love to hear if this one makes it into your book of best laksa‘s in Singapore!