Erich’s Wuerstelstand Singapore: Where Oktoberfest Is Forever at a Hawker Stall, With Amazingly Affordable Currywursts

The term “Western food” in our hawker culture is often used to describe anything that doesn’t originate from Asia. Most western stalls have very similar menus, with items like chicken chop or fish and chips reigning supreme. 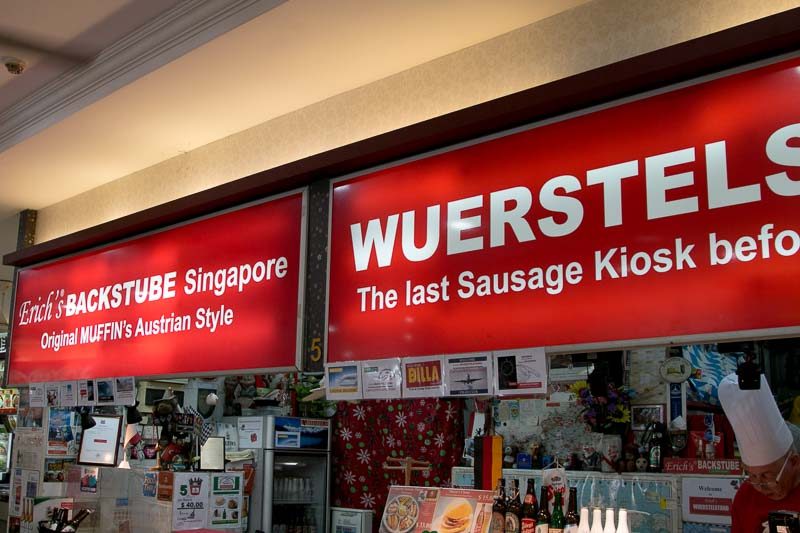 Instead, you’ll find a menu that boasts Austro-German cuisine, or to be more descriptive, delicious cured or smoked meat, potatoes, sauerkraut, bread and curry. Currywursts to be precise, but more on that below.

What’s that? You don’t want to fill yourself up with meat and experience the glory of “meat sweats”? Say no more, Erich’s Backstube provides the perfect company to his smoked and cured meats with a variety of baked items. Rustic loaves of bread, savoury Bavarian pretzels and even muffins. 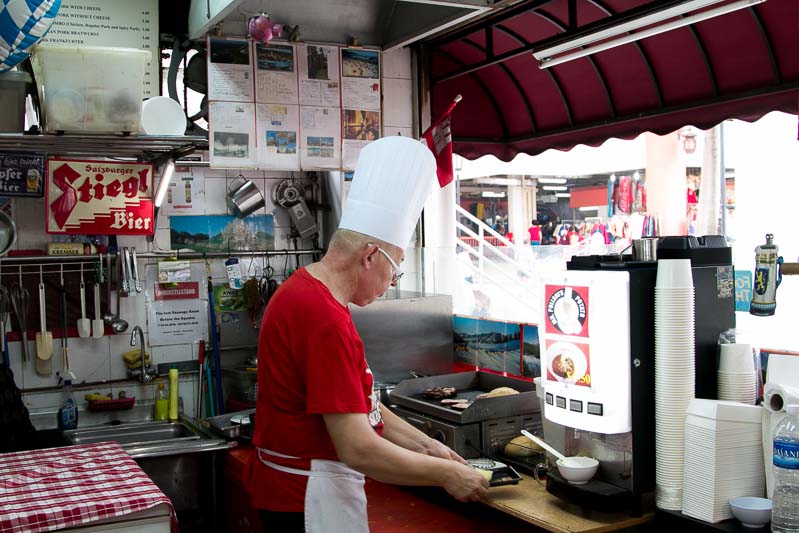 Erich’s Wuerstelstand and Backstube aren’t new kids on the block. Having been around for approximately 12 years before moving into an actual coffeeshop setup 3 and a half years ago, Erich gets his “brats” or sausages made according to his own recipes offsite, complete with the security of intellectual property laws.

It’s almost time to reveal what a currywurst is, but first, everything else I tried. If you’re looking for something familiar and comforting, you can’t go wrong with mashed potatoes ($1.50) garnished with what I thought were fried shallots commonly used to top local dishes. Erich was quick to explain that in German cuisine a dry-roasted version is used.

The mashed potatoes can be paired with anything else on the menu but, I decided to stick with the classic German side, sauerkraut ($1.50) or fermented chopped cabbage. Tangy and salty, think of it as German kiam chye with the added benefit of probiotics – the stuff yoghurt brands constantly rave about. A Bavarian style pretzel ($1.50) makes a nice filling snack on the go and was next up on the cards. The dark glossy exterior has a mild saltiness and this style of pretzel has a good chew to it, so fair warning for those who prefer their bread fluffy and airy. 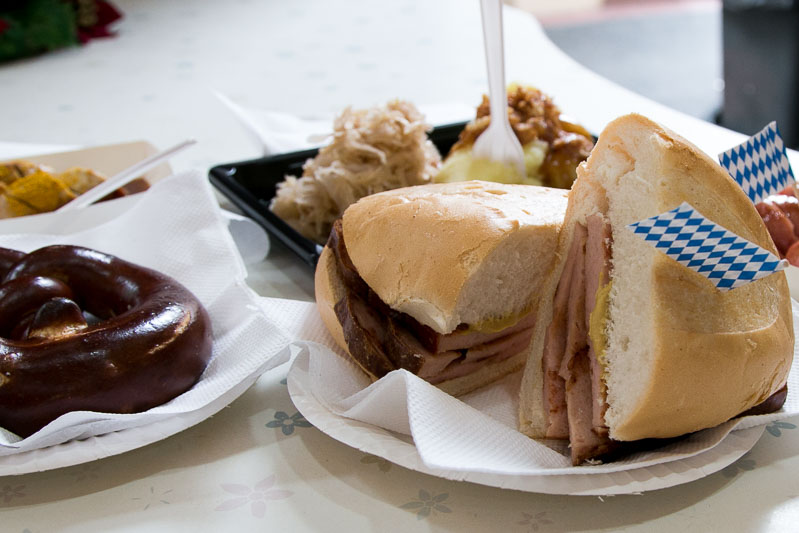 I’m one to worry about establishments skimping on the protein in their dishes. If you’re like me and harbour similar concerns, the meatloaf sandwich ($5) will put your mind at ease. Thick slices of meat loaf stacked atop one another in a sturdy roll with a good smear of mustard giving it a bite which cuts the saltiness of the cured meat.

However, if there was one thing I could change about the meat loaf I’d prefer it done with coarser minced meat but, that’s just my preference. 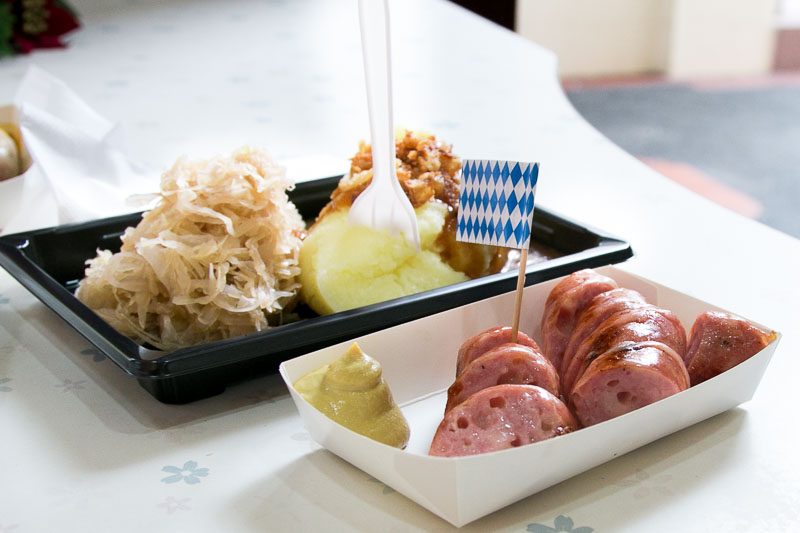 Smoked pork sausage with cheese, as in cheesed filled, or Kaesekrainer ($4) was the first of the two sausages I decided to try. Fresh off the griddle, it was salty and well… smoky, while the cheese coats your mouth as you chew on it. If you’re looking to try something interesting, might I suggest the currywurst ($3.50), a bratwurst (the standard German sausage) dressed up with curry sauce that is best described as the close cousin of a beloved dipping sauce found at outlets of a rather large fast food chain. Curry powder is sprinkled over and it’s good to go.

This would make great hangover food by the way. 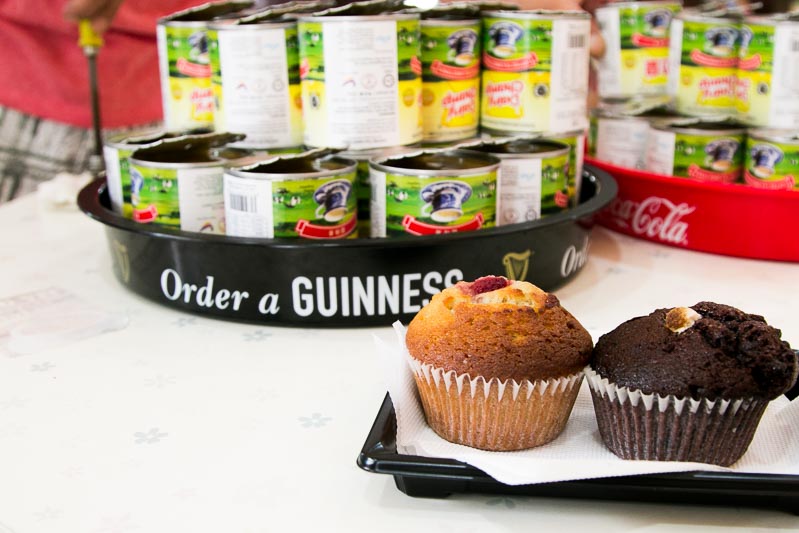 For dessert, or if you have a sweet tooth, Erich’s Wuerstelstand and Backstube bakes a variety of muffins ($3). Let it be known that I’m indifferent when it comes to muffins and cupcakes.

Did these muffins change my Grinch-like sentiments toward this baked good? Perhaps ever so slightly. The strawberry muffin was light, fluffy and moist.

However, the chocolate mint muffin did it for me, with it’s slightly crusty top and dark richness, biting into gooey bits of chocolate was so satisfying and the mint was a nice refreshing finish after the initial hit of rich chocolate. Not everything at Erich’s Wuerstelstand and Backstube may be handmade but, with Erich ensuring his standards are met, the sausages here are quality stuff.

This isn’t some newfangled dimly lit bistro that has an ever changing menu. With an unabashed attitude and simple bold food. Erich has weaved himself into both the gastronomic and social fabric of Singapore –  specifically Chinatown.

With Oktoberfest just around the corner, I’d recommend this as a more affordable and unique way to get into the mood. And in Erich’s own words, “it’s always Oktoberfest here”