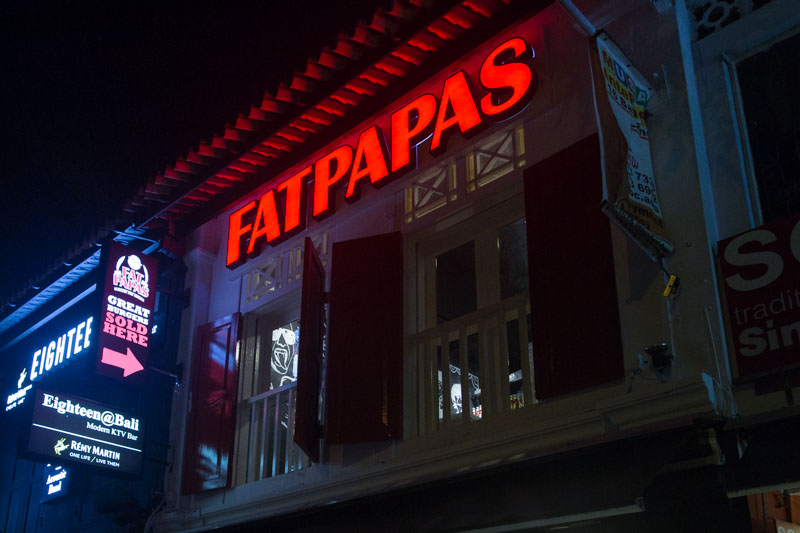 FatBoys is a well known name in Singapore for its delicious burgers, so when FatPapas launched in early 2017 as a Halal spinoff, I was super excited for all my Muslim friends to be able to try the burgers. 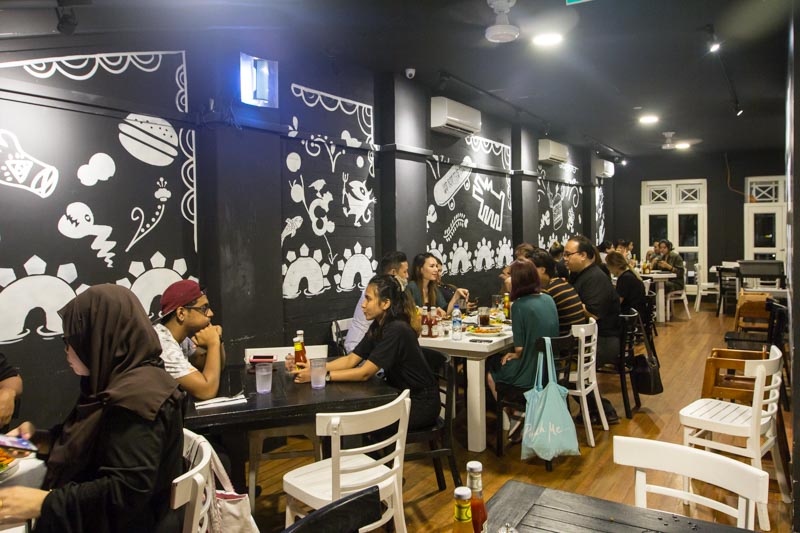 Located at Bali Lane, this two story shophouse is a short five minute walk from Bugis Junction, with a larger space on the second floor for customers.

It was rather crowded when we visited at 8.30pm, reservations are recommended because there’s always a long queue to get in. Since this is a Halal eatery, there were a few new dishes specially designed for Ramadan. 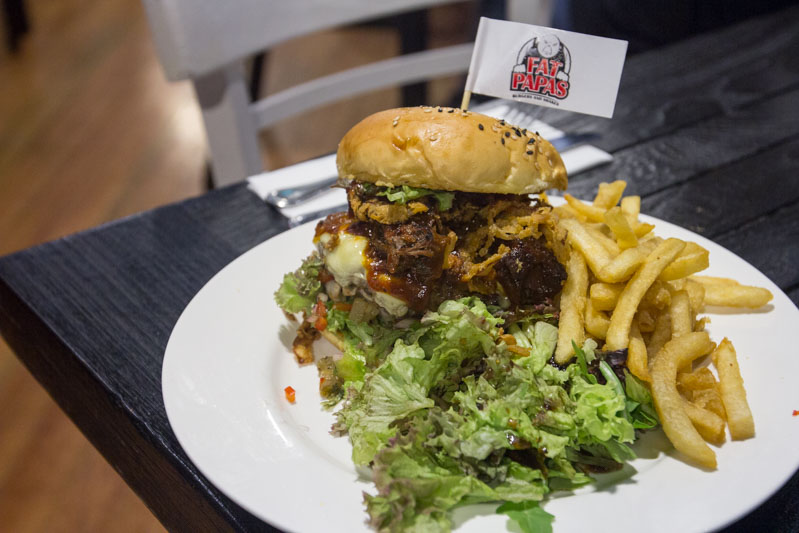 The R&B Burger ($20 for single patty, $24 for double patty) was a stand-out that night, with R&B meaning “ribs & beef”. Made with a thick juicy patty and tender beef ribs, this was one mouth-watering burger.

The freshness of the pineapple salsa balanced out the sweetness from the barbecue sauce, and there was just enough to keep the burger tender and juicy. 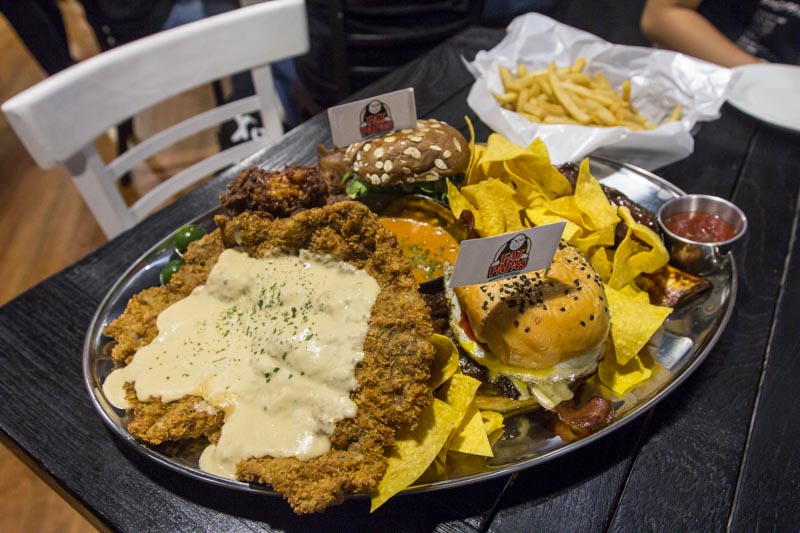 The other special dish for Ramadan is the Together-Gather platter ($99, meant for four people), which was absolutely massive.

It consisted of a slab of Beef Ribs, Country Fried Steak, Chilli Chicken Boners, Chilli Queso and Chips, Fries and any two burgers from the regular menu. Only after digging into it, I found out the hard way that it could feed at least six hungry adults instead of four. 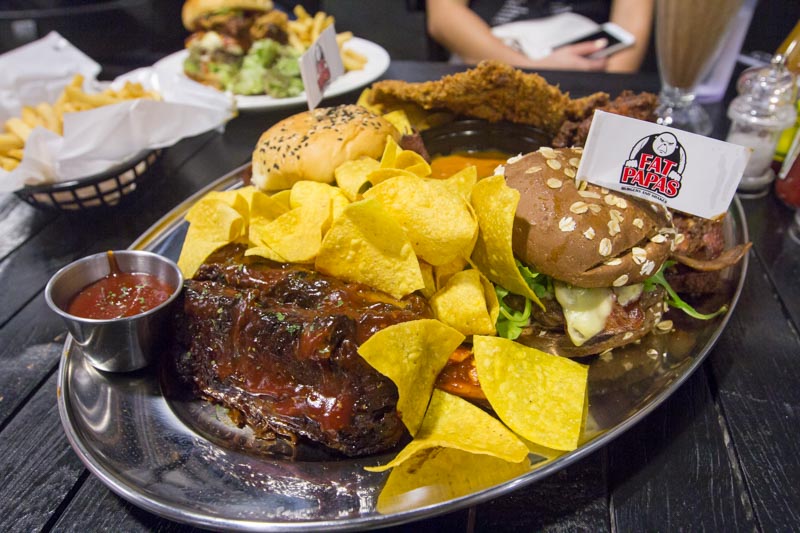 The Beef Ribs ($22 on normal menu) fell off the bones easily and was tender with a sweet and smokey barbecue sauce that coated each of the ribs. There were about four ribs on the platter, so rest assured that there are plenty to go around. 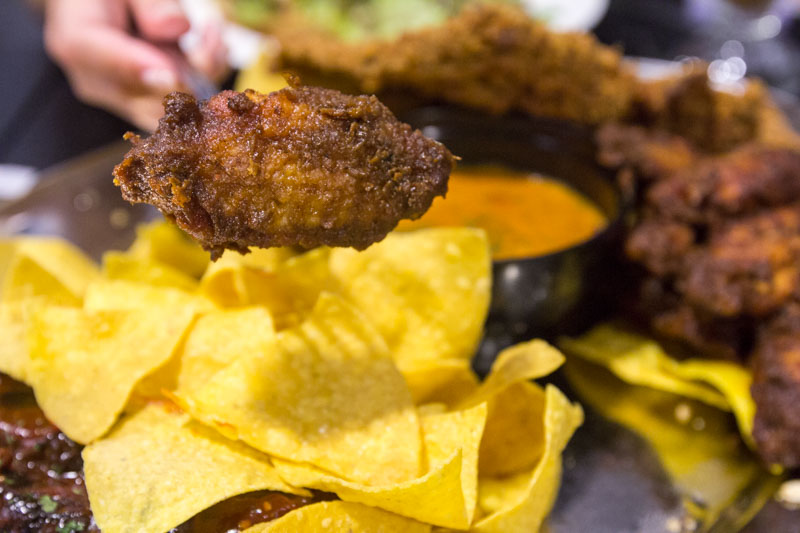 Who can resist chicken wings? The Chilli Chicken Boners ($11.50 on normal menu) were pretty special; they tasted of sambal, and when lime was squeezed over, it really reminded us of sambal stingray.

The Chilli Queso and Chips ($9 on normal menu) were a great side for sharing, with the zesty and slightly spicy dip that we couldn’t get enough of. 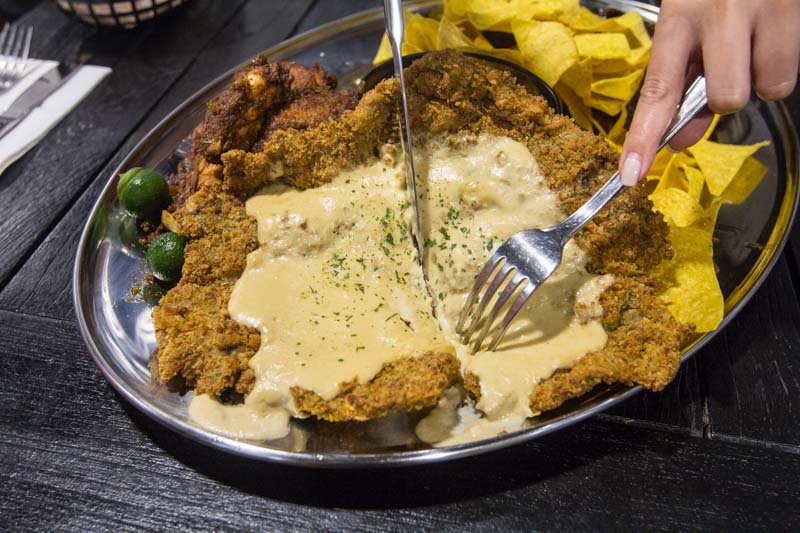 The Country Fried Steak ($18.80 on normal menu) is most likely the thing to catch your eye first, simply because of its size. Breaded and fried, the chicken steak is topped with a creamy bechamel sauce that adds flavour and prevents the chicken from getting too dry.

We found that the outermost edges of the steak were dry though, but it’s a hard issue to tackle since the different thickness of the meat inside cooks at different timings.

The turkey bacon might throw some people off, with a chewier texture, but paired with the thick patty, this burger was definitely a filling one. The Wimpy burger is the best selling burger from FatBoys, with a fried egg, turkey bacon, aged cheddar and bbq sauce atop a beef patty, sandwiched between sesame seed buns. I thought the egg was an interesting addition, but it would have been nicer if the egg yolk was runny.

The turkey bacon was slightly crispier, and the patty was the same thick and juicy one we had in the Bushtucker. To wash all that down, we got the Chocolate Banana Milkshake ($10.80) and the Vanilla Nutella Milkshake ($11). Having heard only good things about FatPapas’ milkshakes, I came with high expectations and I was glad that the drinks lived up to it. The Chocolate Banana Milkshake was rich and thick with a strong a chocolatey taste, the banana flavour was a little mild, but still present.

My favourite was the Vanilla Nutella Milkshake though; equally as thick, but with a taste more reminiscent of vanilla ice cream with the Nutella flavour kicking in a little later. Each milkshake comes with two torched marshmallows, but I thought the execution could be tweaked as the cold drink had caused the marshmallow to be a little harder than it should have been. I might not be fasting, but I can foresee myself coming down to FatPapas more often for their R&B Burger. If you’re worried that you won’t be able to try the R&B Burger before Ramadan ends, you’ll be glad to know that FatPapas will be adding it to their secret menu, so customers will be able to enjoy it even after the month of June 2017!

Previous articleMr Lor Bak: Heartwarming Pork Belly Rice With A New Recipe That Will Leave You Full Of ‘Braise’ Now Reopened At Ubi
Next articleCafe 566: Dine At This Jungle-Themed Zi Char Restaurant In Mandai Estate