Singaporeans will eagerly chime that char kway teow or chicken rice are worthy representatives of local hawker food. Few, however, will mention the unassuming lor mee.

For arguably obvious (or not) reasons, this bowl of saucy noodles doesn’t seem to appeal to many. I have my own reservations about it too, largely being very particular about how the braised gravy tastes, and whether or not fried fish is served with it; most stalls these days replace it with fried batter. I was eager to try Yew Tee Feng Zhen Lor Mee, hearing that this stall allegedly checks all the right boxes for one of the best lor mee’s around. I let out an inevitable groan when I heard that the two outlets are both located in the West, at Taman Food Centre in Jurong and at the hawker centre near Yew Tee MRT station. At this point, it seems crucial to mention — the lor mee was worth the journey to the West.

Both outlets belong to the same family, a mother-daughter duo, where the Taman Jurong stall was first to open. Subsequently, Mdm Teo learnt the ropes from her mother and operates the stall at Yew Tee with her husband and eldest son.

Long queues are a common sight at both outlets any day of the week, selling out even before their stipulated closing time. 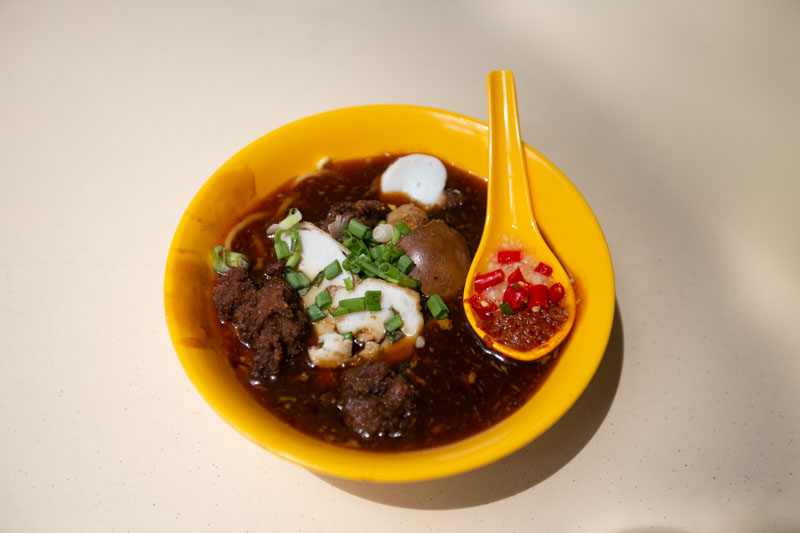 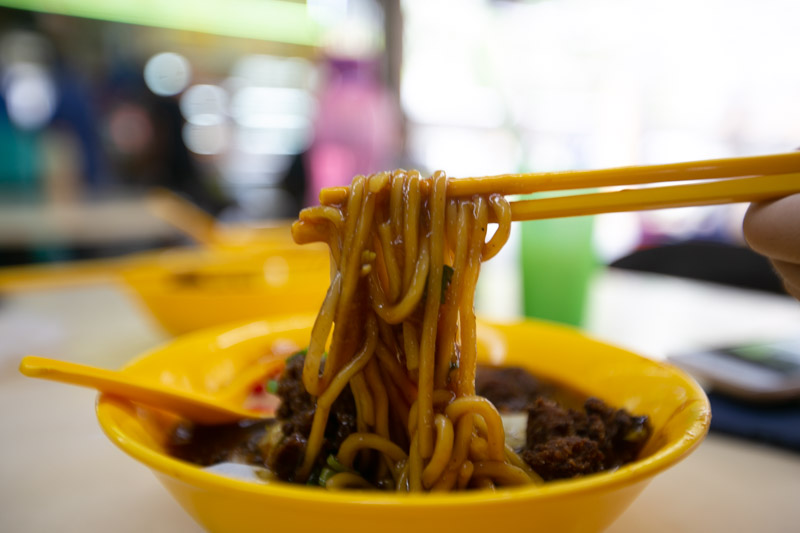 Customers have a choice between round or flat yellow noodles, and we opted for the round noodles for the original Lor Mee (S$3/S$4). The spoonful of chopped garlic, sliced chilli, sambal and coriander gave a burst of colour to the otherwise dull bowl of mee.

It was a rather ingenious way of serving the condiments on the spoon, instinctively suggesting that all of what’s on the spoon needs to be mixed into the bowl to bring out the best flavours. The goopy, thick and starchy gravy far exceeded expectations, especially after mixing in a generous dose of zingy vinegar and everything on the spoon. Explaining exactly how that tasted is a little tricky, considering how it was a combination of sweet, sour, savoury and spicy.

Expectedly pungent, the sharp taste of the freshly chopped garlic was mellowed by the braised gravy and the two kinds of spiciness from the sambal and chopped chillies made each mouthful extremely satisfying.

While the mandatory addition of egg into the gravy didn’t add any more flavour to the dish, it did its part by smoothing it out. 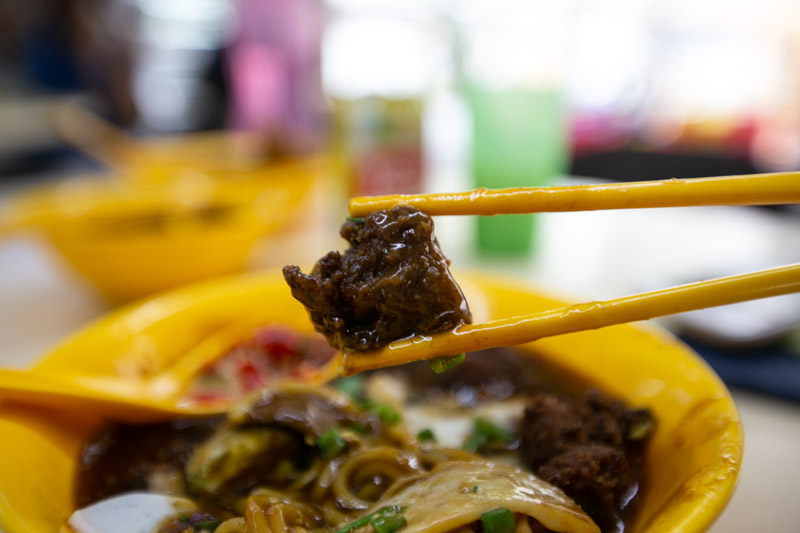 Each bowl of lor mee is also served with their hand made fried pork balls. Bite-sized and still remaining crispy as we dipped them into the gravy, you can order an additional portion for just a dollar. 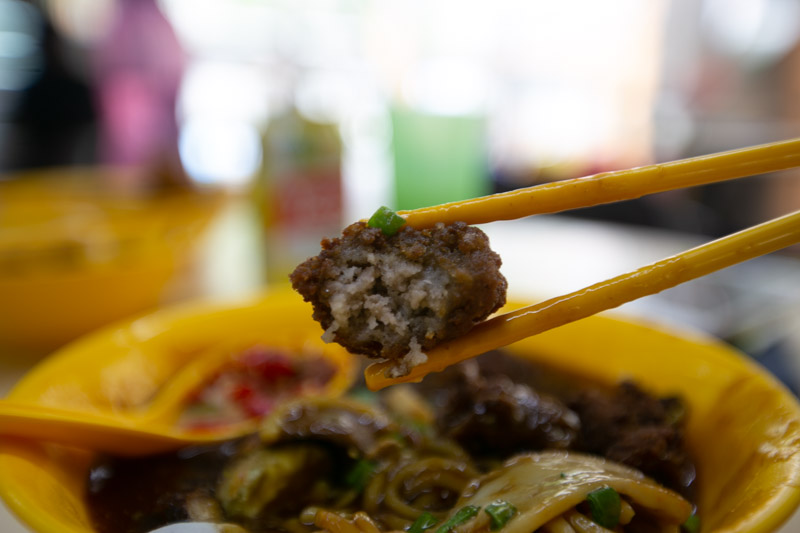 We gather that these addictive snack-like sides are partly the culprits for the notoriously long queues at Yew Tee Feng Zhen. 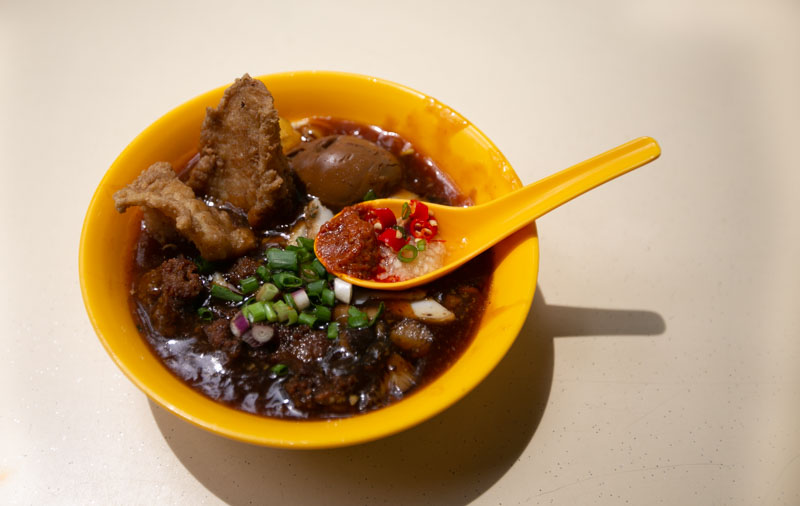 As mentioned, one vital pre-requisite of a good bowl of lor mee is the incorporation of deep-fried fish, and I had raised expectations knowing that Feng Zhen offers exactly that with their Fried Fish Lor Mee (S$4/S$5). 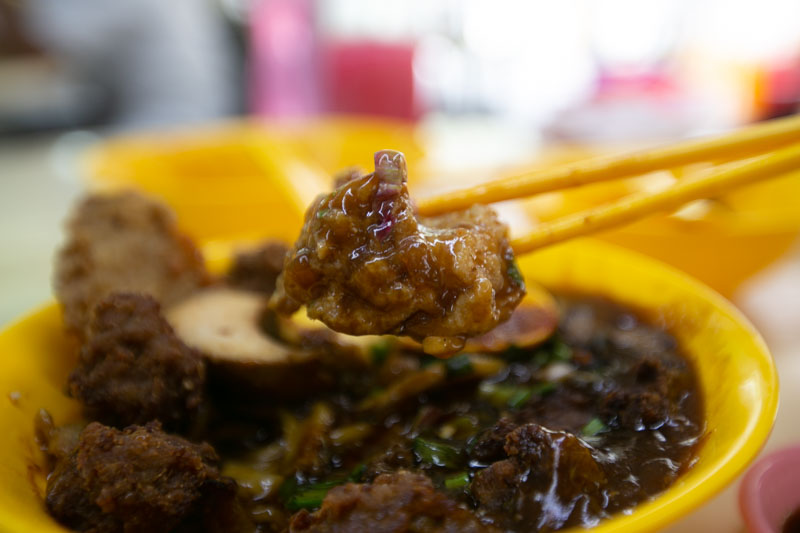 Then again, fried fish has on its own a different set of qualities for it to qualify as mention-worthy. While pale-yellow battered fried fish is commonplace in most food courts, those tend to soak up the soup very quickly and end up being soggy. 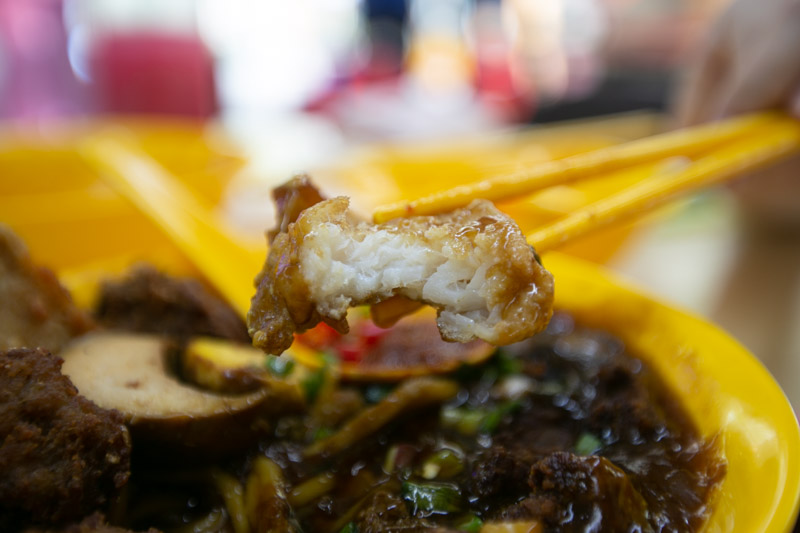 Using a thinner coat of batter, the fried fish came through, remaining crispy even as it was doused in the gravy. Oddly enough, both the fried pork balls and fish went against the belief that sauces, soup or gravy spoil the lovely crunch of fried food.

On the contrary, in this case, we felt that the gravy heightened the taste of the already flavourful fried food.

I suppose that many would agree how much of our hawker culture doesn’t lie solely on the quality of food (though absolutely the crux), but also in the service and overall experience we receive. We reckon that those willing to join the already long queues during peak hours do it not just for a bowl of lor mee but are heartened by the quick and efficient service the family provides.

Regulars are often impressed by the impeccable memory of the eldest son who helps out at the stall in matching each order to the exact customer, allowing them to take a seat while their order is being prepared.

While some may still be adamant that nothing can beat Old Airport Road’s lor mee, I must say that this stall truly deserves an honorary mention. It sure is a pity if you have to travel to the far West just for this moreish bowl, but I assure you that it is worth every bit of the journey. 10 Food Places You Should Bring Your West Side Buddies To