No matter how much of a foodie you are, you can only eat so much in a day. So what’s a foodie to do when you just can’t seem to get enough of it?

These days, there’s pretty much a show for anything food-related — from travel documentaries to cooking competitions with sob stories and dramatic down-to-the-last-second finishes. Similarly, just as with food places in real life, some deserve to be viewed more than others.

So, here’s my recommendation of some of the best food shows till date, comprising of films and documentaries that will not only evoke the foodie in you and hopefully also give rise to your next food craving! A must-watch for all sushi fans out there, this documentary by David Gelb features Jiro Ono, an 85-year old sushi maestro whose excellent sushi has earned his restaurant Sukibayashi Jiro three Michelin stars. Given his age, will his sons be able to carry on his legacy? 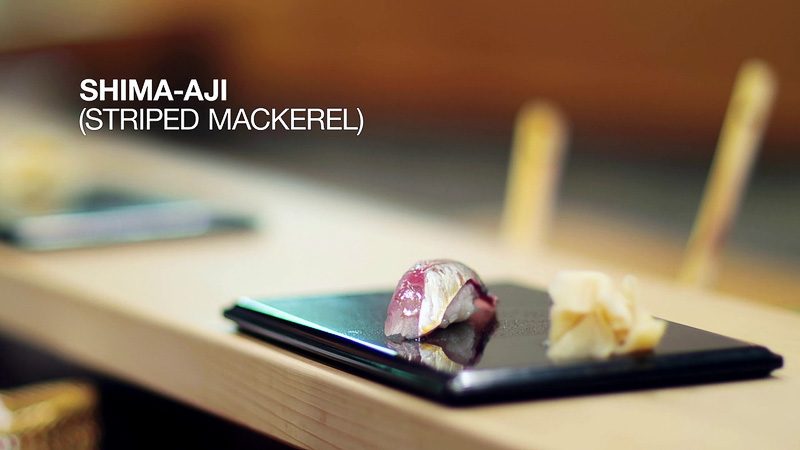 On top of the awesome slow-mo shots of nigiri moulding that will have you craving sushi for your next meal, Jiro’s earnest passion for his craft will definitely rub off on you. Another thing I love about this documentary is the often-overlooked relationship between restaurant/chef and the fishmongers of the famous Tsukiji Fish Market who provide the amazing ingredients that make it all possible.

And of course, who can forget apprentice Nakazawa’s repeated failures at making the tamagoyaki (Japanese rolled omelette) before finally succeeding? By the way, he’s a really successful sushi chef in New York now with his own restaurant. Created by David Gelb (director of Jiro Dreams of Sushi), Chef’s Table follows a similar format to his previous masterpiece with each episode featuring a chef and his/her personal journey as well as the creative process behind the amazing food they make today. 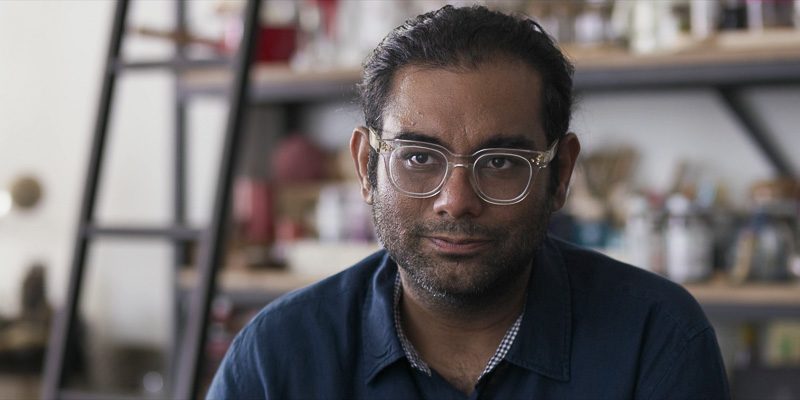 One of my favourite episodes has to be the one about Gaggan Anand and his journey towards the 22-course Indian menu behind Gaggan, his restaurant in Thailand that has clinched and retained the very top spot of Asia’s 50 Best Restaurants for the past three years. 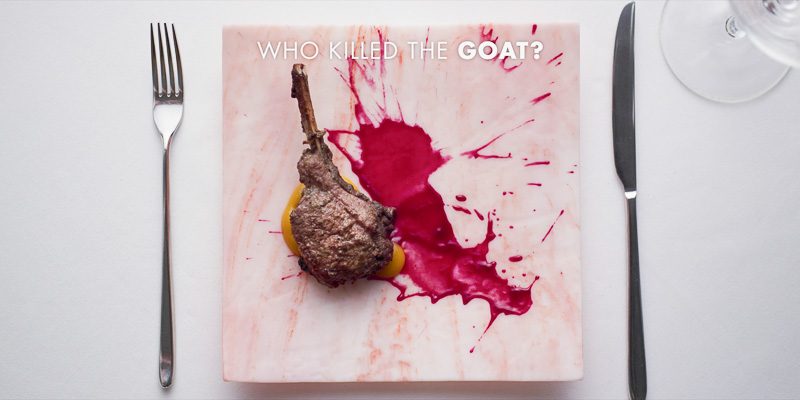 With each dish representing different cooking styles from all over India, Gaggan wants to show the world that Indian cuisine has so much more to offer than just tikka masala. 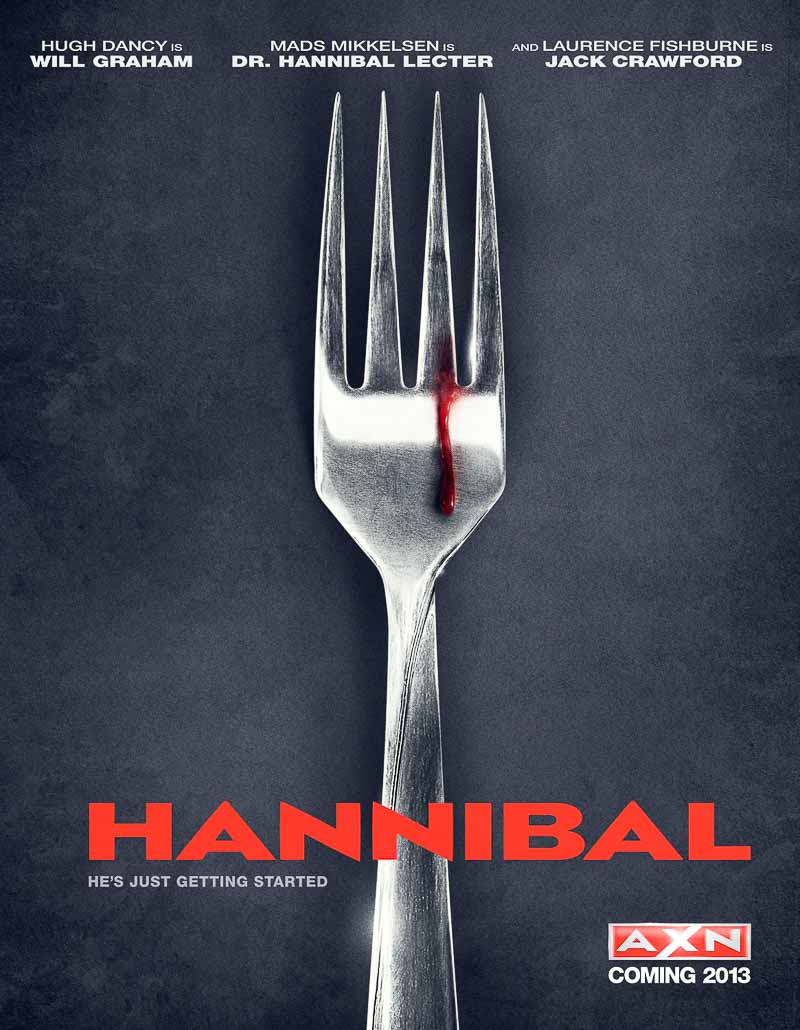 Aesthetically beautiful slow-mo shots and the moral dilemma of cannibalism aside, the scenes of Hannibal Lecter (played by Mads Mikkelsen) meticulously preparing lavish dinners for his party guests almost makes you feel like it’s okay to eat human meat. Almost. 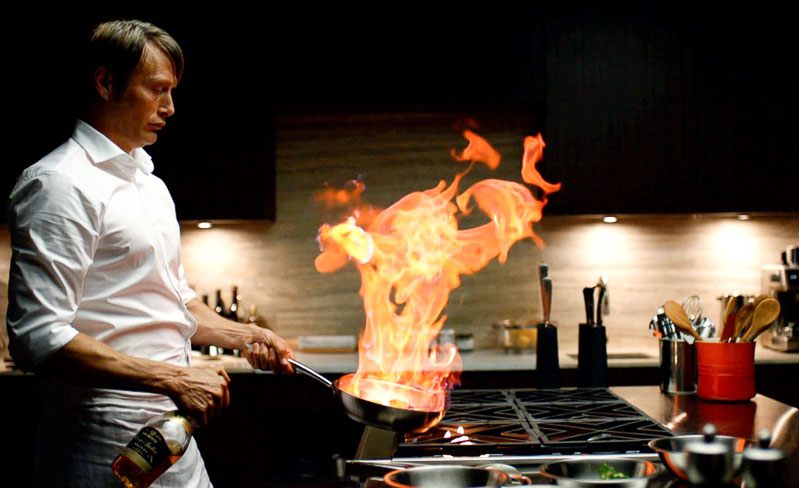 Fair warning though, this show does have some scenes of (beautifully shot) violence. But if you can stomach that, you’ll find yourself on a truly enjoyable psychological ride that will keep you gripped till the very end. Master of None is a comedy-drama about Dev Shah, a middle-aged small-time actor (played by Aziz Ansari) in the big city of New York trying to find his direction in life — hence the title. Each path he takes always seems to lead him back to food, one way or another.

It’s hard to tell from the screenshot but Dev and his best friend Arnold are toasting to each other with pasta in an Italian restaurant surrounded by racks and racks of wine.

Besides, it’s a really good show on its own with well-written comedy and drama so I highly recommend it! A 1994 Taiwanese film directed by Ang Lee, the story revolves around Old Chu, a widowed ex-head chef of a Chinese restaurant who’s learning to deal with retirement, and his three unmarried daughters.

The question the film poses is essentially this: What does it mean to be a modern Chinese family? Without spoiling any major plot points, I’ll just say that the film has its fair share of light-hearted as well as serious moments — and you can expect most of it to happen around the dinner table.

Definitely, a must-watch, if only for the hilarious twist towards the end of the film.

6. Michelin Stars: The Madness of Perfection A BBC documentary filmed in 2010, the questions it asks are nevertheless still relevant today — especially with the rise of affordable Michelin-starred hawker fare in the past couple of years.

The host, a food critic and writer, interviews Michelin-starred chefs and even helps out in their kitchen in order to find out what the stars mean to restaurants, chefs and of course, diners.

While the chefs appear casual and friendly while speaking to the camera, you can really feel their drive to make sure every plate is perfect before sending it out to the diners. Are Michelin stars a worthwhile goal to aspire to, or an over-hyped farce? We’ll let you decide. 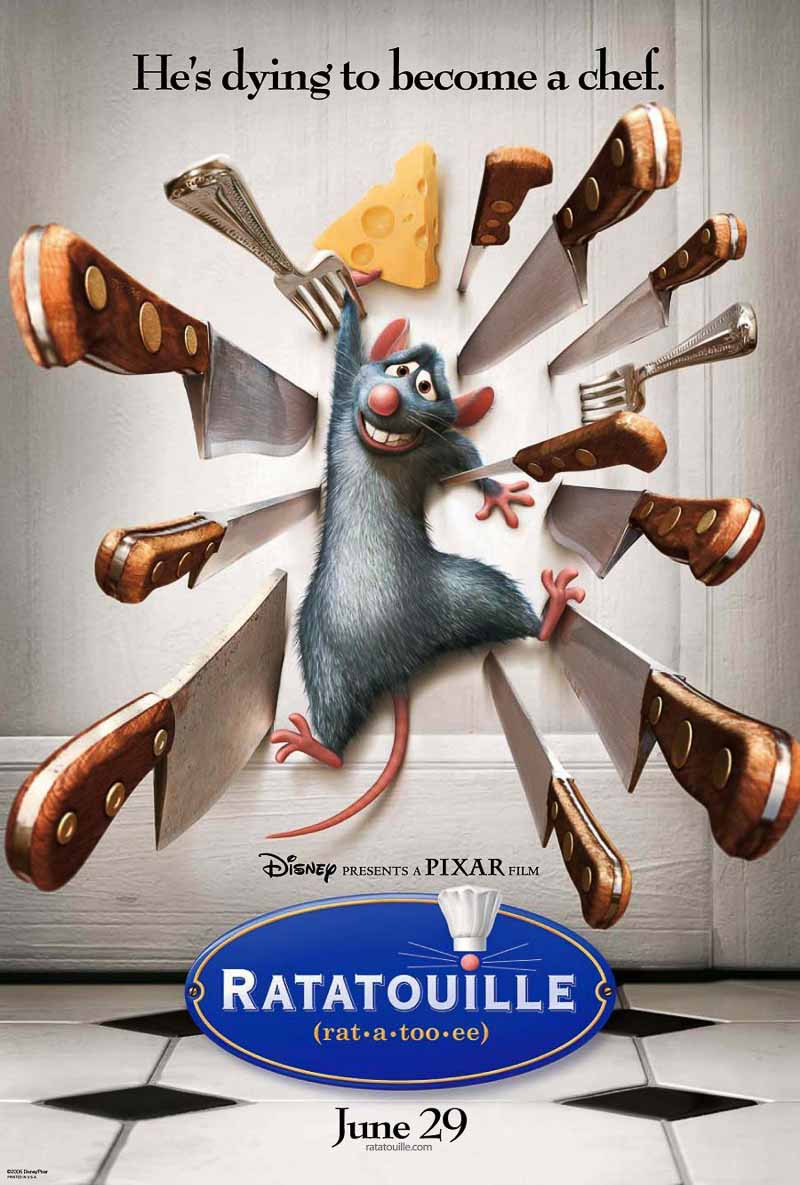 This is probably the most-watched entry on this list so I’ll make the introduction quick. The film centres around the unlikely friendship between idea-filled Remy and struggling cook Alfredo Linguini in their quest to be the best restaurant in Paris.

While Ratatouille is generally a light-hearted film, it’s interesting to see how Anton Ego, the food critic, is portrayed as a sort-of demonised villain, an enemy to be won over. (I wonder if chefs in real life view us the same way too.) 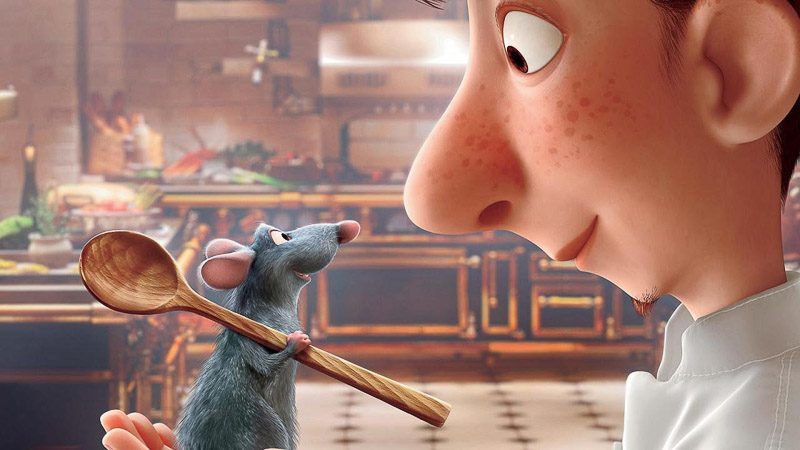 The partnership between main characters Remy and Alfredo Linguini also poses another interesting thought: Who is the real chef? The one with the ideas, or the one doing the cooking? This film is for all you ramen lovers out there. A comedy film released in 1985, the story revolves around Goro and Gun, a pair of truck drivers who happen to pass by a worn-down and struggling ramen shop owned by Tampopo, a widow.

Seeing that they are discerning diners, she asks the duo for help in improving her ramen which marks the beginning of their hilarious but heart-warming journey. Another thing I love about this film is the variety of comedic subplots that, while completely unrelated to the main story, provide an insightful view into food and its place in everyday situations — especially the granny who runs around the supermarket damaging anything she can get her hands on. 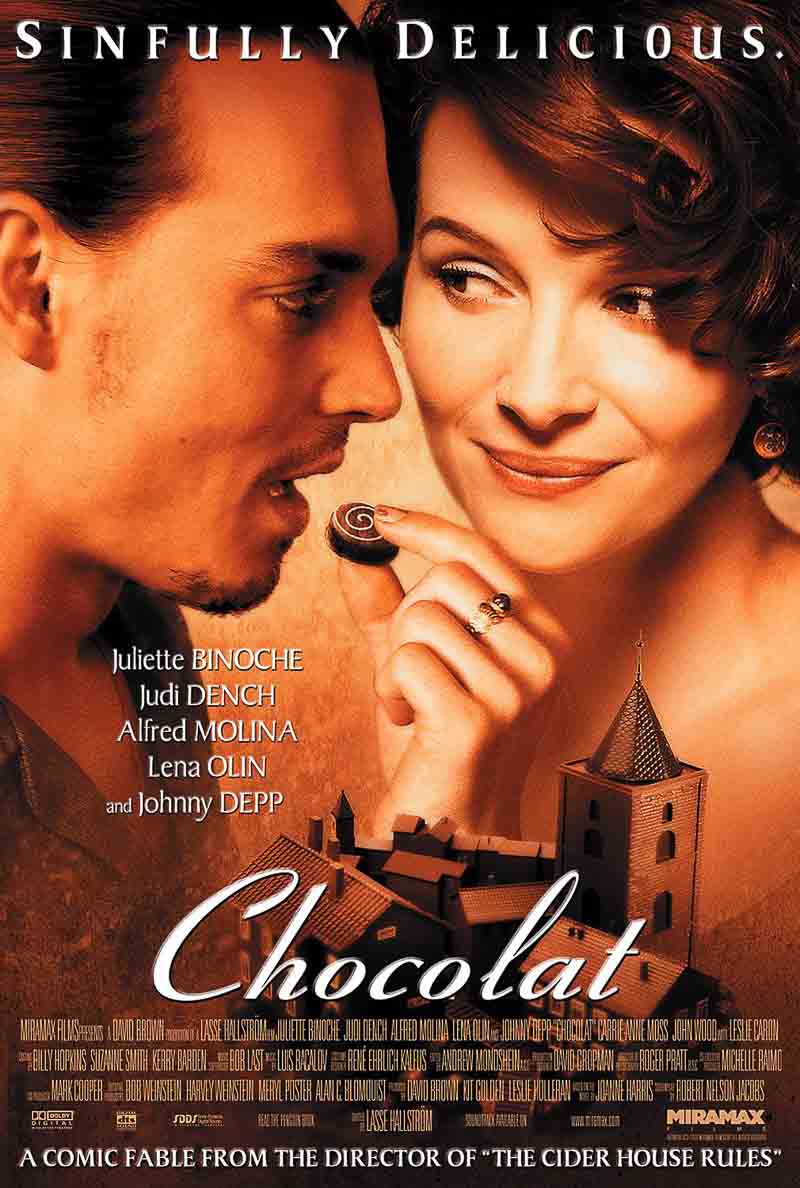 A romantic comedy released in 2000, Chocolat is based off a novel of the same name and features the story of Vianne Rocher, a widow who sets up a chocalaterie in a quiet and traditionally religious French village in the middle of a fasting season. With her delightful chocolates and sincere demeanor, she aims to win over the hearts of the villagers. 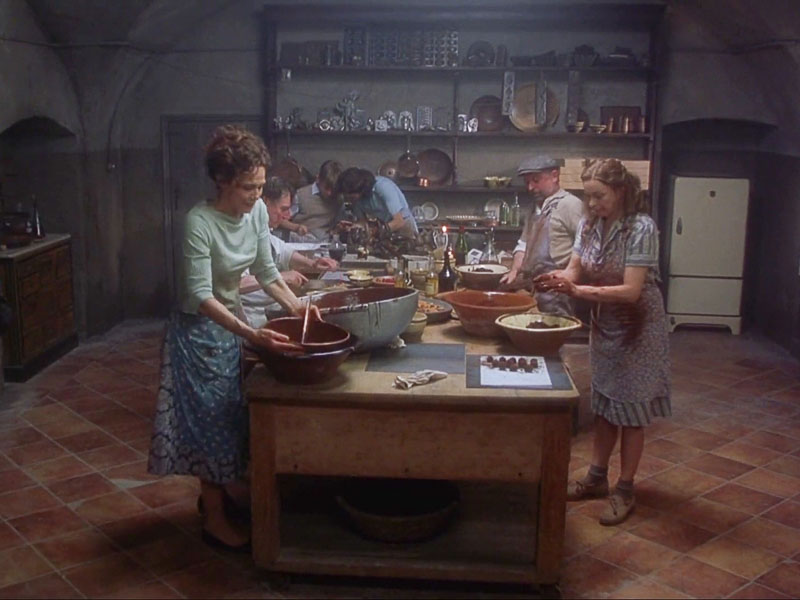 It’s pretty funny how just the act of eating chocolate in the film has the villagers rushing to confess it as a sin (probably because it’s so delicious). One thing’s for sure, you’ll definitely be craving for chocolates after this film — I know I did. The Trip has a very straightforward premise: two friends go on a road trip to the English countryside to dine at and write about good restaurants. And that is all they do, with the occasional quip about the pretentiousness of fine-dining etiquette while trading celebrity impressions.

While The Trip is set against the backdrop of many great restaurants, the direction nudges that into the background and instead focuses on the experience of having a meal with that friend you hate to love and love to hate. 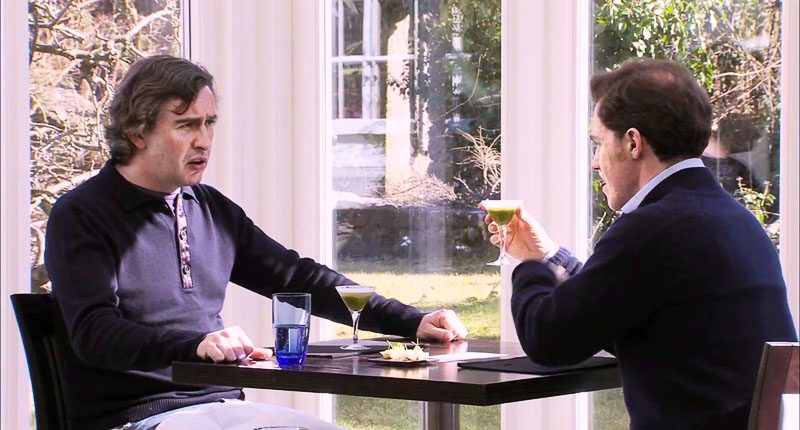 Actors Steeve Coogan and Rob Brydon play as themselves throughout the film; there’s no larger story at play. Perhaps this is what allows their dialogues and exchanges to seem so natural, genuine and entertaining.

If you like this film and would love to see more, you’ll be glad to know that there are already two sequels so far: The Trip To Italy (2014) and The Trip to Spain (2017).

While these aren’t technically films or TV series, these YouTube channels produce some great food-related content so do give them a try.

1. Eater’s Dining On A Dime (affordable and popular eats, each season focuses on a major city)

2. Eater’s The Meat Show (A show focusing entirely on meat and nothing else.)

4. Bon Appetit’s Working 24 Hours In… (the host works a full 24 hours without sleep at a food establishment for a perspective on what goes on behind the scenes that most customers don’t get to see.)5.

5. Binging with Babish (a recipe channel that specifically picks up food dishes from TV shows and movies such as the ratatouille dish from well, Ratatouille.)

Did you enjoy watching the entries on this list? What other great food shows do you think we should know about? Let us know!