Residing on the first floor of Golden Mile Food Centre, Fūdo dishes out a variety of Japenese-Western fusion food. Just looking at the skill of photography and editing on the menu at the storefront, it’s no surprise that Fūdo stands out among the typical hawker stalls. 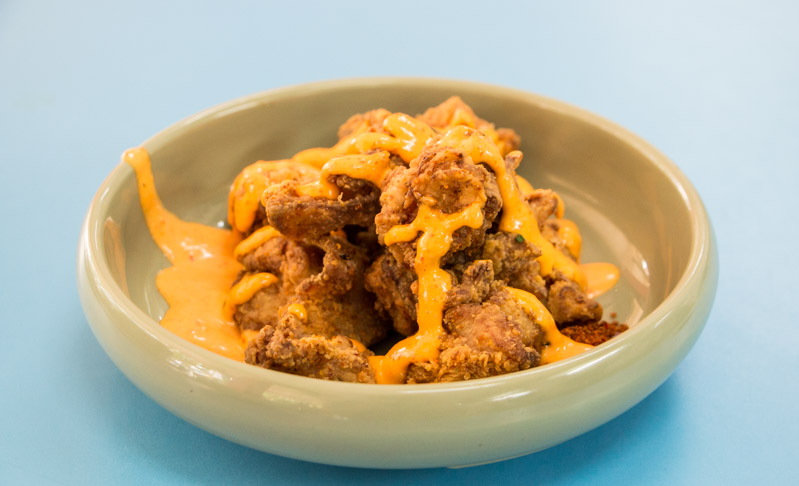 I decided to dive right into the Mala Fried Chicken Karaage (S$4) to kick start the meal. Served extremely fragrant and piping hot, the succulent pieces of boneless chicken were topped with fermented chilli mayo. 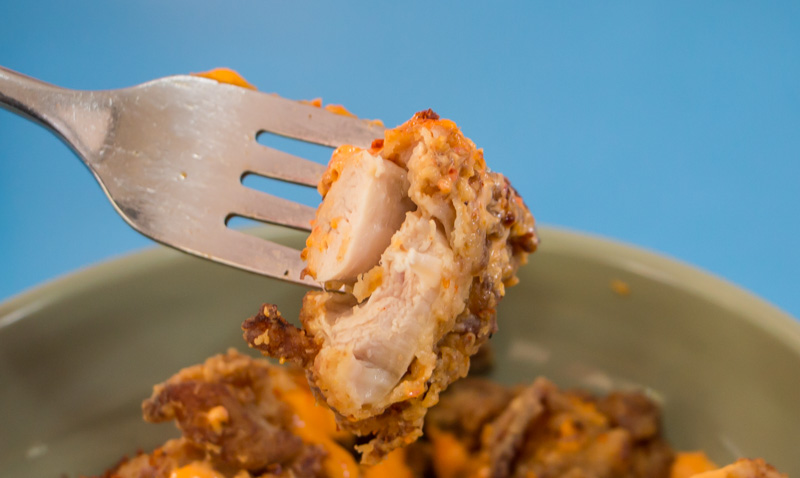 For S$4, I felt like the portion was definitely worth its price. It might be the placebo effect, but I felt like there were mala spices infused into the batter. However, the karaage was served alongside Sichuan peppercorn, which enhanced the spicy flavour of the starter. I was surprised at the juiciness of the karaage too, which was extremely delicious and easy to eat. Next up, I ordered the Prawn Miso Angel Hair (S$6). As it was a little oily when it arrived, I was pretty sceptical about this dish. However, the Capellini noodles were really thin and I was excited to give it a try because I’ve rarely tried this type of pasta. The Capellini strands were cooked till al dente, and I found that the texture of the pasta was perfect for me. Sprinkled with mini prawns, the pasta was served so fresh that the steam was still wafting above it. Unfortunately, the taste of miso was not as prominent as I had hoped, and was overpowered by the amount of oil used.

Personally, I wouldn’t purchase this again when I revisit the stall, solely due to its greasiness. Just looking at the oil made my thoughts race at how sinful this meal was. 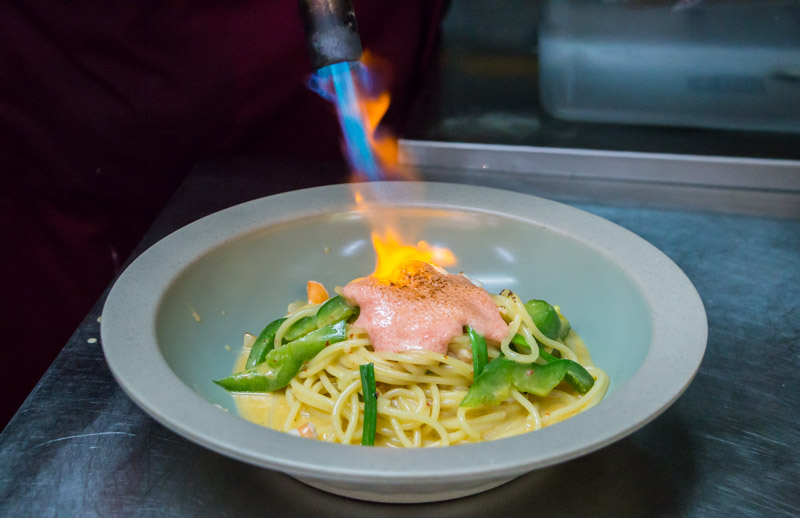 One of the dishes I was most excited to try was the Spicy Mentaiko Spaghetti (S$7). If you’re into theatrics, you’ll be able to see the owner torch the mentaiko to give it a slightly burnt and crispier texture. 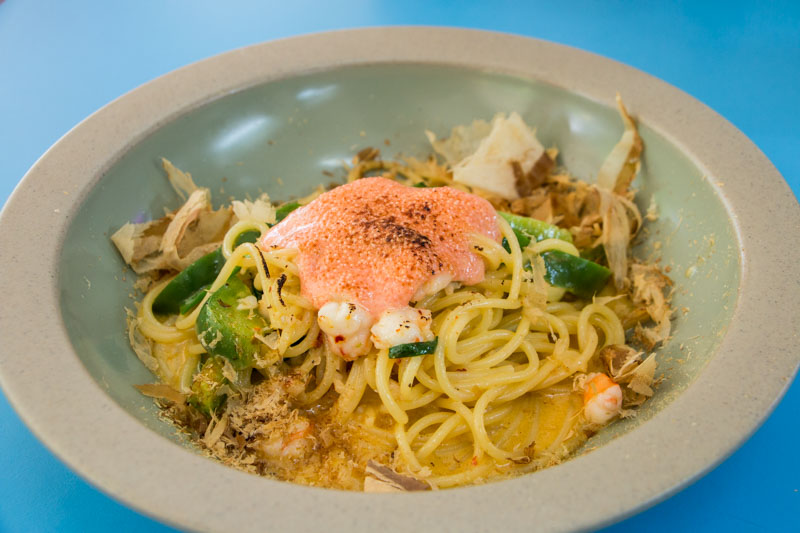 Nestled within the Katsuobushi (bonito flakes), the spaghetti was covered with a glob of mentaiko, charred to perfection. Capsicum peppers and mini prawn bits were also well mixed in. 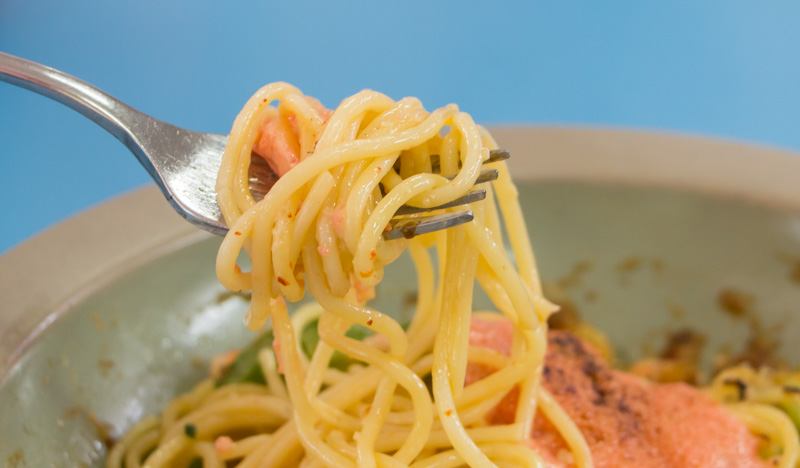 The first thing I noticed about this dish was the intense taste of peppers. To me, the Katsuobushi also overpowered the taste of the mentaiko. This dish wasn’t particularly spicy to me, but the spaghetti was well-cooked and of the right consistency. Exceptionally fresh, the briny taste of prawns was still muted by the peppers and Katsuobushi. I could only taste the dish in its full umami glory after mixing in the mentaiko, and I felt that it was quite enjoyable overall. 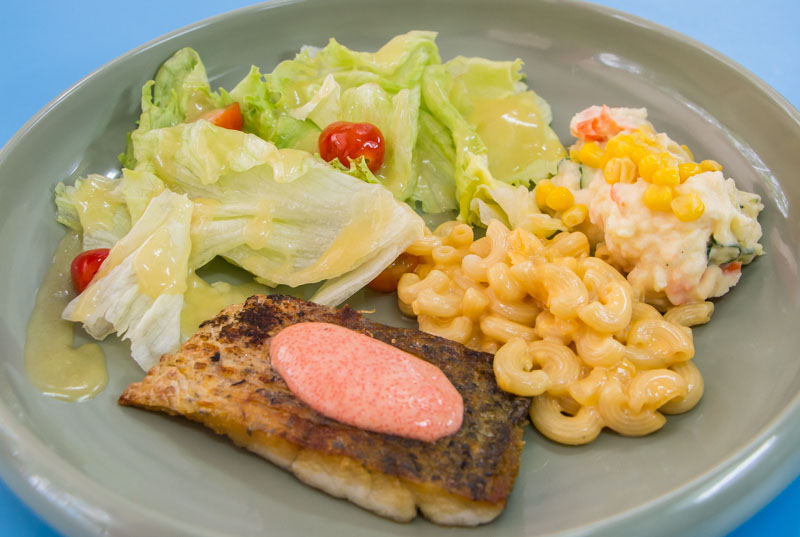 Following the pasta, I tried the Pan Seared Sea Bass Fish (S$8), also topped with a dollop of mentaiko. Served alongside three sides, I had the macaroni and cheese, potato salad and a garden salad. According to the owner, the sides and the topping for the fish change according to the current food trends, so you may have different sides and toppings at your next visit! The sea bass was well-cooked, but it was a little small in size. However, I felt that it was worth the price, considering the whole set was only S$8. Crispy on the outside but tender on the inside, I wolfed the sea bass down in a matter of seconds. Together with the mentaiko, the freshness of the fish flavour was enhanced and it was extremely delicious. 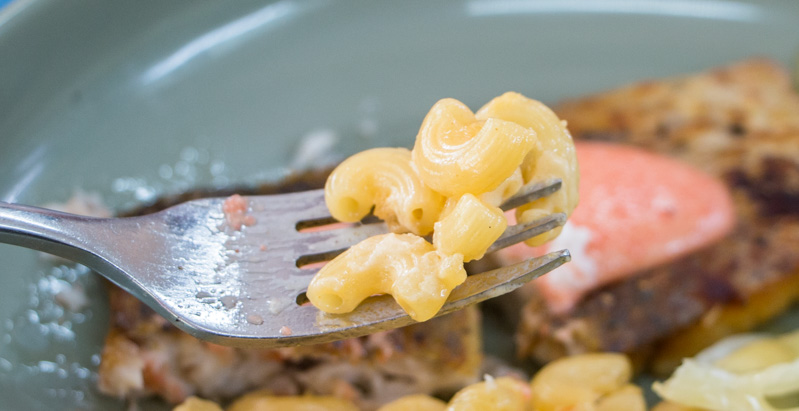 Mac and cheese is a common side at most Western restaurants, but only some can pull it off. Here at Fūdo, I consider their mac and cheese a smashing success. It had a hint of sweetness to it, and it was not overly salty. I would definitely pick this any day, over places like Astons.

I absolutely loved the potato salad as a side as well. Dressed in Japenese mayo and sake mirin, it includes whipped potato, corn, and thinly sliced carrots and cucumbers. I wouldn’t usually order a salad as a side to my main, but this salad was incredible. The perfect blend of sweet and salty, the flavours were mixed to a euphoric harmony. Last but not least, we ordered the Ribeye Beef Steak at S$11. Because most hawker Western stalls struggle to pull off a nice, medium-rare steak, I was doubtful that I will enjoy it here. Served with the same sides as the Pan Seared Sea Bass Fish and black pepper gravy, the steak was cut up into five slices, with a nice redness to each slice. 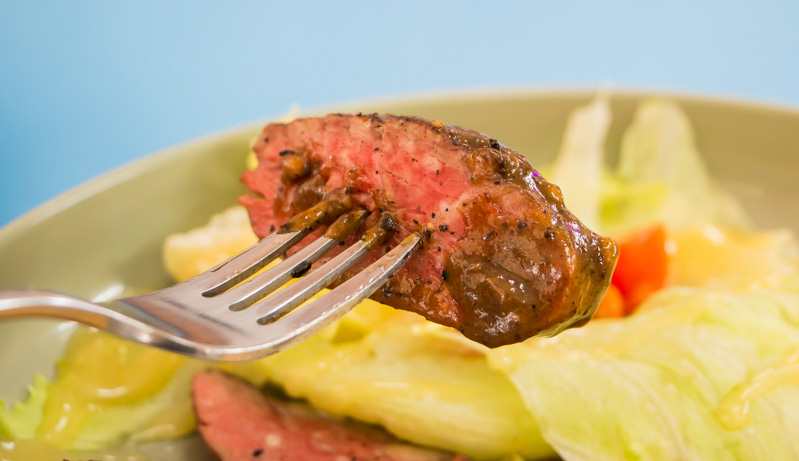 I wouldn’t call this a medium-rare steak, but the default the owner serves up when people order without specifying their preference of doneness is medium to medium-well. I was so glad it wasn’t well-done because, from personal experience, most Western hawker stalls dish out well-done steaks. It had a nice bite and wasn’t too hard, which made it one of the top 10 Western hawker stall steaks I’ve tried.

Obviously, it’s not A5 wagyu, melt-in-mouth standard, but it was worth the price. I would have preferred for it to be softer and done in medium-rare, but that was on me for not requesting the doneness of the steak. I would say it’s a little salty, but I consider it to be well-seasoned because I like it better that way.

If you’re heading down to Golden Mile Food Centre any time soon, I suggest you drop by Fūdo to try their Mala Fried Chicken Karaage, Spicy Mentaiko Spaghetti, and Ribeye Beef Steak. I typically have pretty high standards for my Western fare, and Fūdo has undoubtedly exceeded my expectations.

Check out Fūdo at Golden Mile Food Centre soon—I know I will be making a return visit when my mentaiko cravings kick in.