More often than not, we identify a great, restaurant-quality dish through its impeccable plating and presentation. However, in Singapore, we have one dish that’s more delicious if it’s messy.

This dish in question is none other than Hainanese Curry Rice. There are several well-known curry rice spots across Singapore. However, I was very curious about how this one in Redhill Food Centre would stand out from the rest. So I decided to head down to find out! 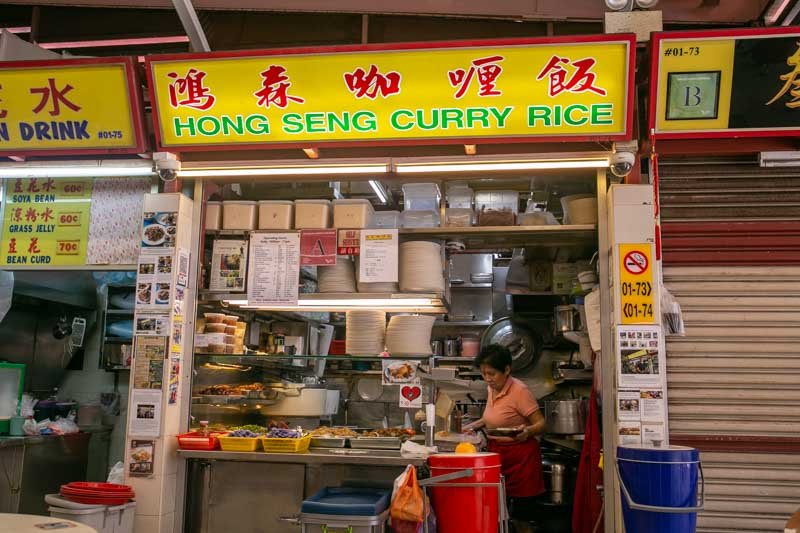 Like most curry rice stalls I know, Hong Seng Curry Rice (鴻森咖喱飯) has been around for a long time. They started the business in 1995 and are currently handled by second-generation owners. Alex took over the stall from his uncle and father two years ago. Back then, they wanted to shut the doors for good and retire, but Alex felt strongly against it.

He thought it was a pity to let such a long-running family business die, so he decided to step in and take over. 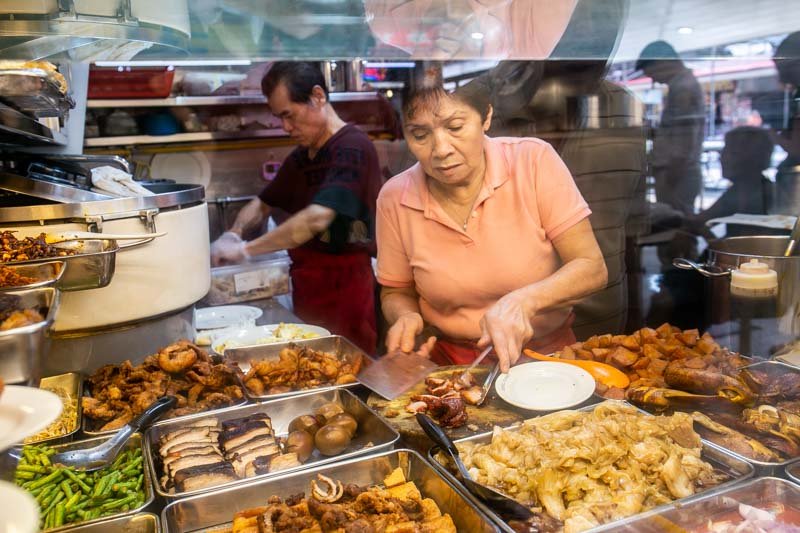 Currently, Alex’s parents man the original stall in Redhill. They have another outlet in SMU, supposedly with more hipster dishes to cater to a younger audience. 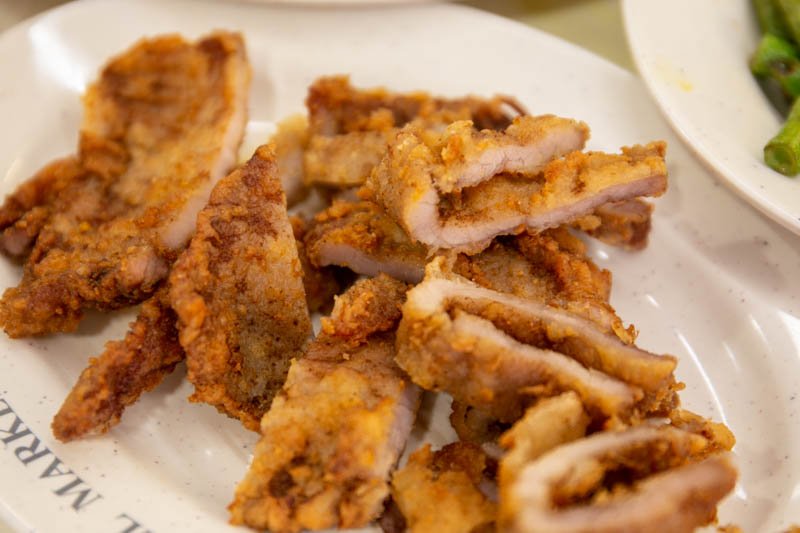 What stood out about it was that despite the thinness of the cut, the pork was still extremely juicy. 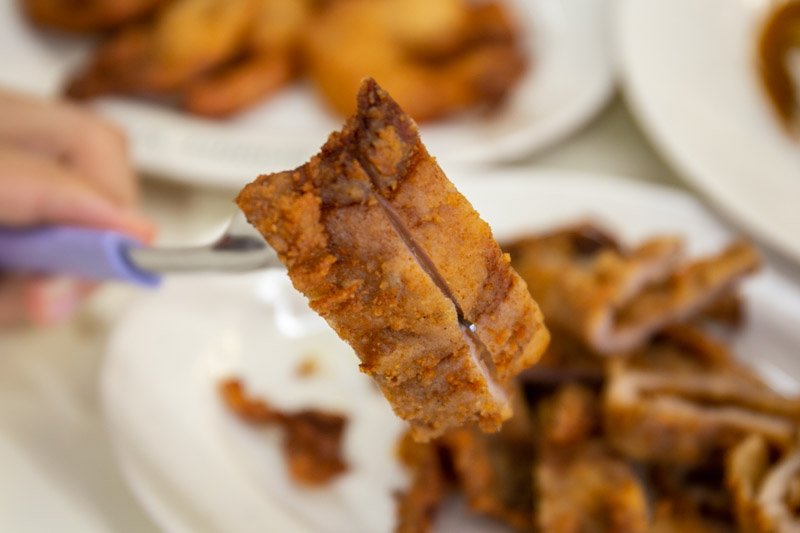 They coat the pork with a layer of cream crackers before deep-frying too. As such, the batter had a nostalgic umami taste which reminded us of our childhood. 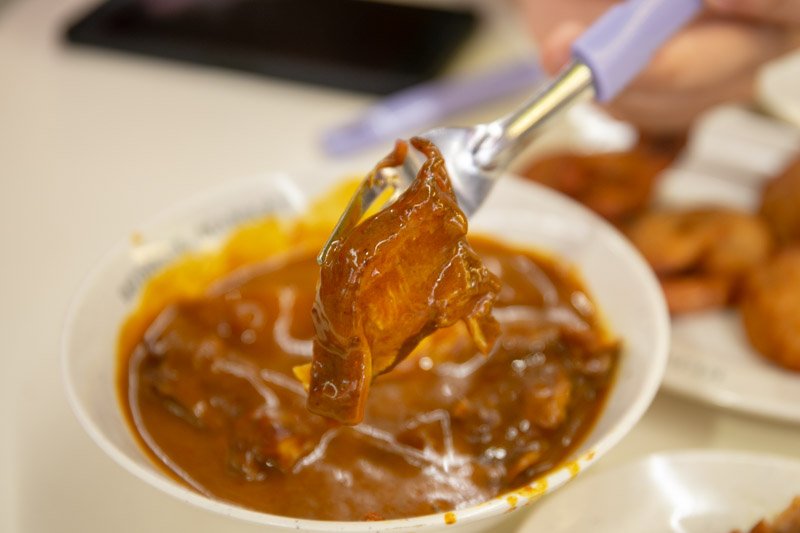 Unlike most curry chicken dishes out there, Hong Seng Curry Rice uses boneless chicken thigh for theirs.

This was the brainchild of Alex, who thought that younger people would prefer boneless chicken. 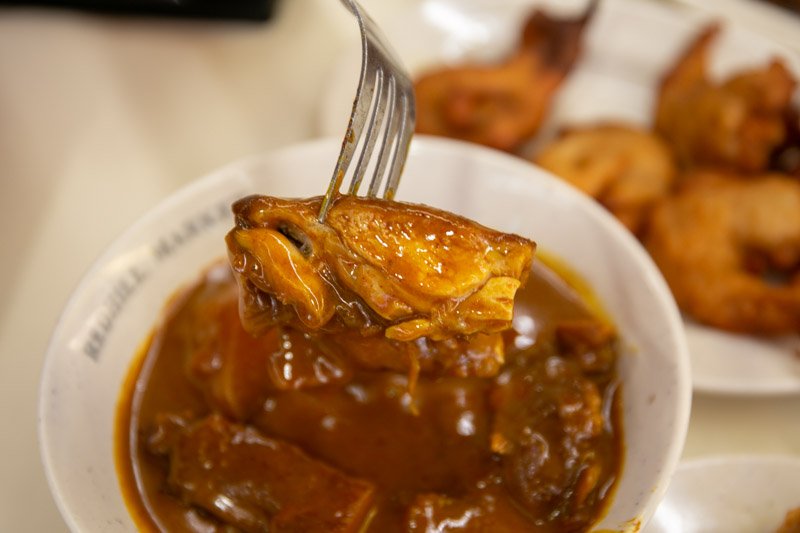 Not only that, but the chicken thigh was also very juicy and tender, to our delight. Alex also recommended the Char Siew 叉烧 (S$1). I wasn’t sure how different it was going to be, but the succulent pork soon proved me wrong. 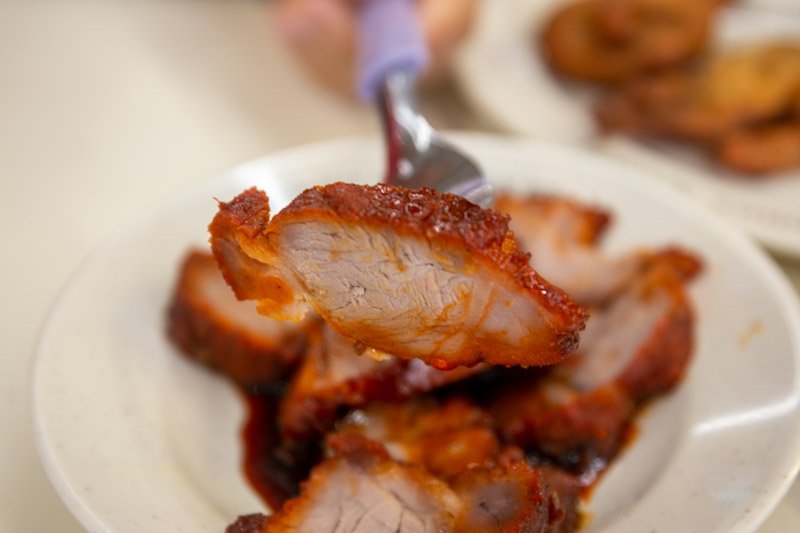 For one, they sliced the barbequed pork into really thick pieces. As a result, every bite we took oozed spectacularly with juice. 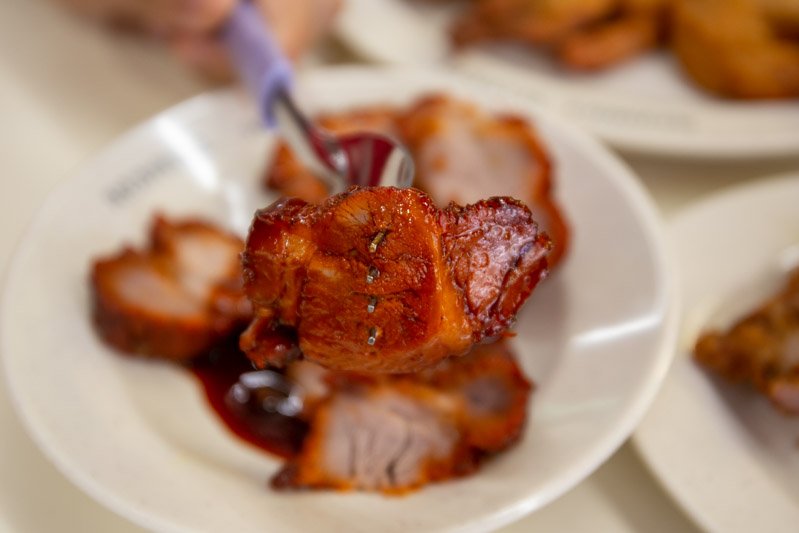 They also drizzle a sweet red sauce over the char siew, giving it subtle notes of sweetness. 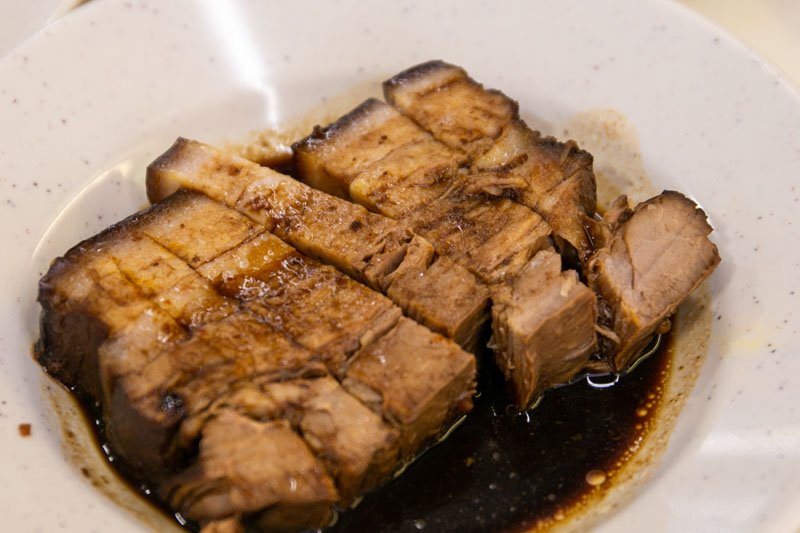 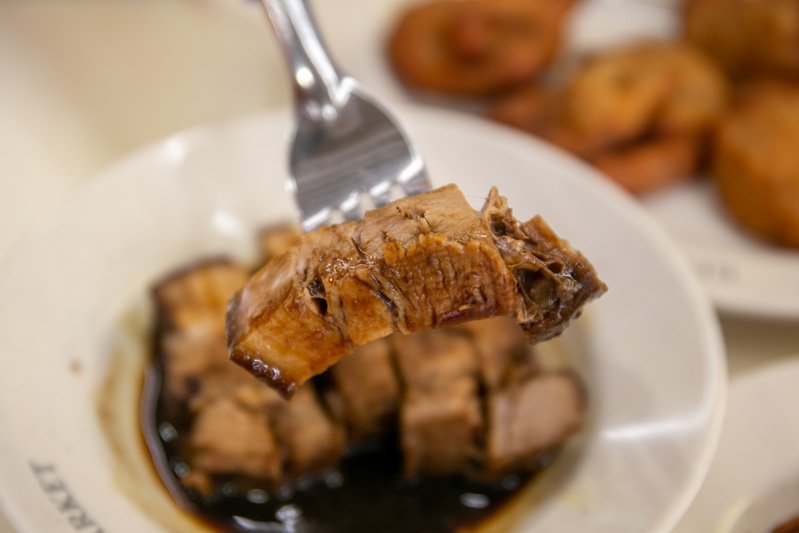 Once again, they sliced the pork belly into really huge pieces. This meant that they were able to soak up the braised sauce and absorb its herbaceous flavours very well. 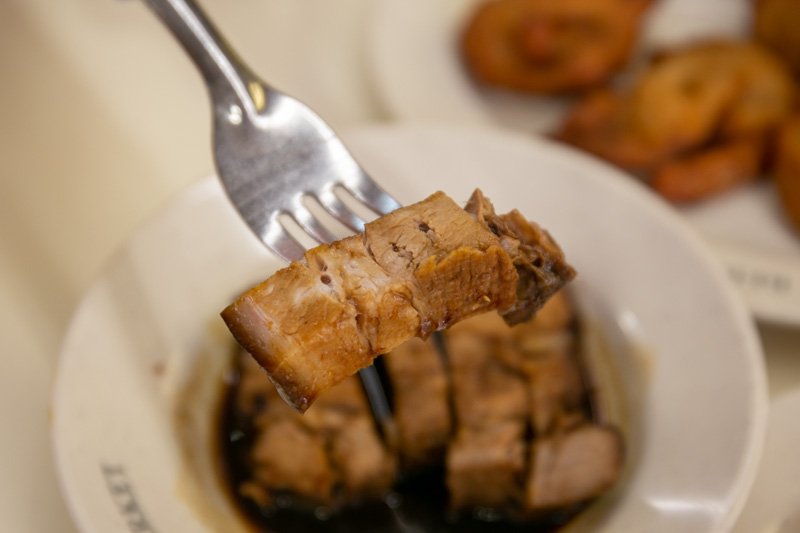 That said, however, the dish would have been perfect if the pork was a little more tender. It was a tad too tough for my liking, unfortunately. 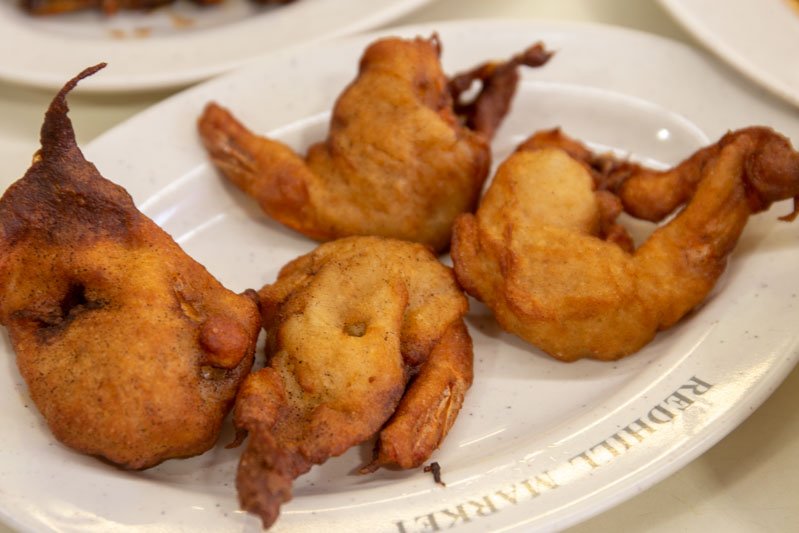 Nevertheless, I was really looking forward to the Prawn Fritters 炸虾 (S$1.80/3 pieces). They were making our mouths water with its irresistible fragrance. 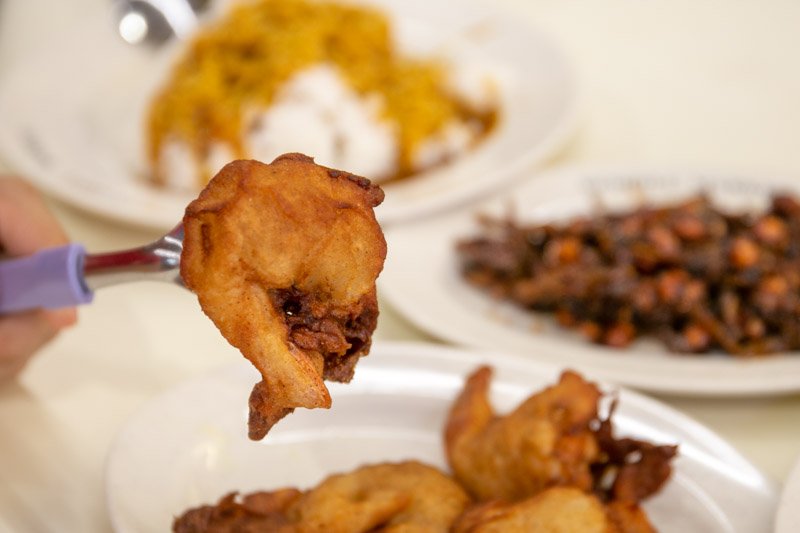 Hong Seng Curry Rice coats the prawns with a thick layer of batter before deep-frying. We appreciated that every bite was soft and crisp, as a result.

They also seasoned the batter very well, giving it a satisfyingly salty flavour. To balance out all the meats we were having, we got the Cabbage 包菜 (S$0.70). According to Alex, this is one of the items which their elderly customers always order. The cabbage was perfectly soft, breaking apart easily with every bite. 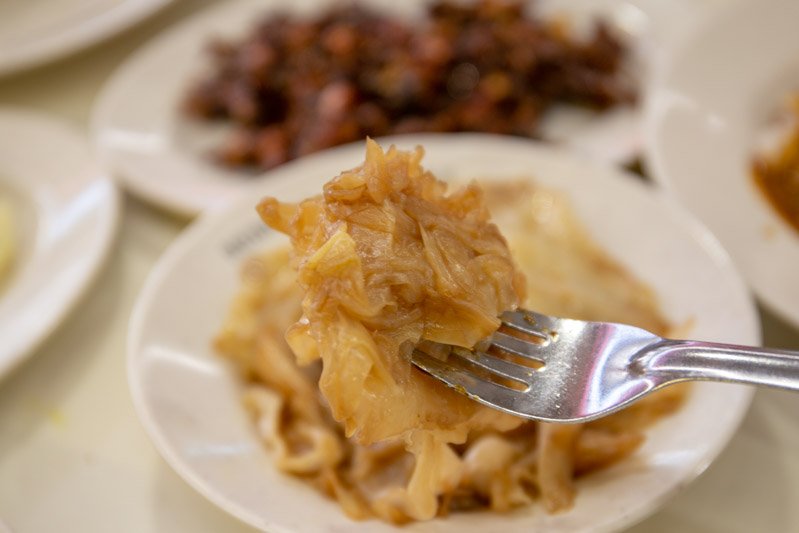 Alex also stressed that they only use fresh ingredients for their dishes. The cabbage was refreshingly moist and managed to cut across the greasiness of all the meats we had. 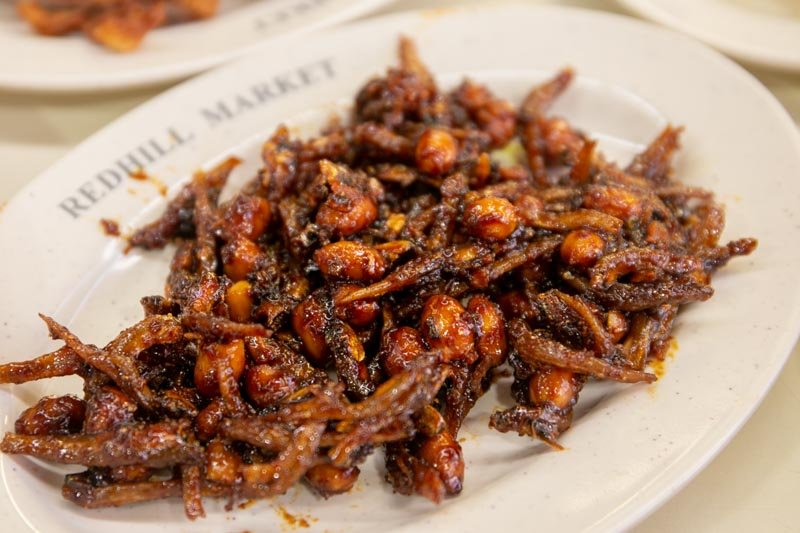 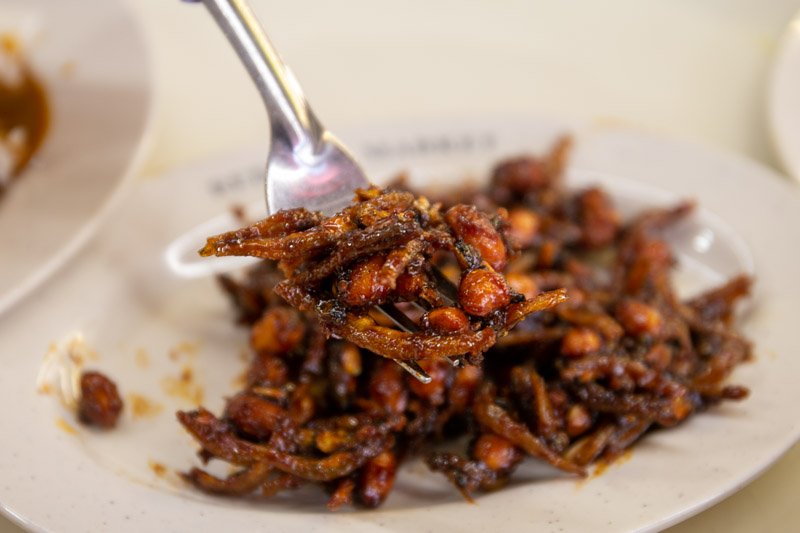 Their Ikan Bilis contains subtle notes of sweetness which they balance with kicks of spiciness. 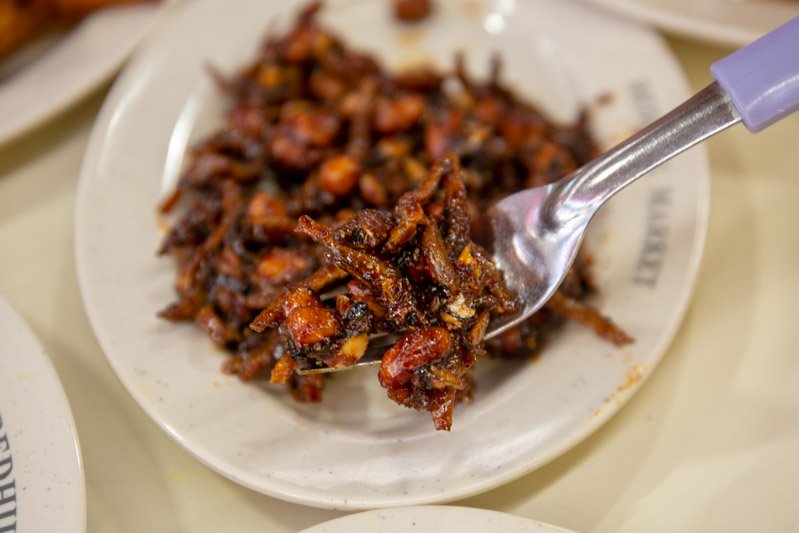 It had a very nostalgic taste which we couldn’t get enough of. 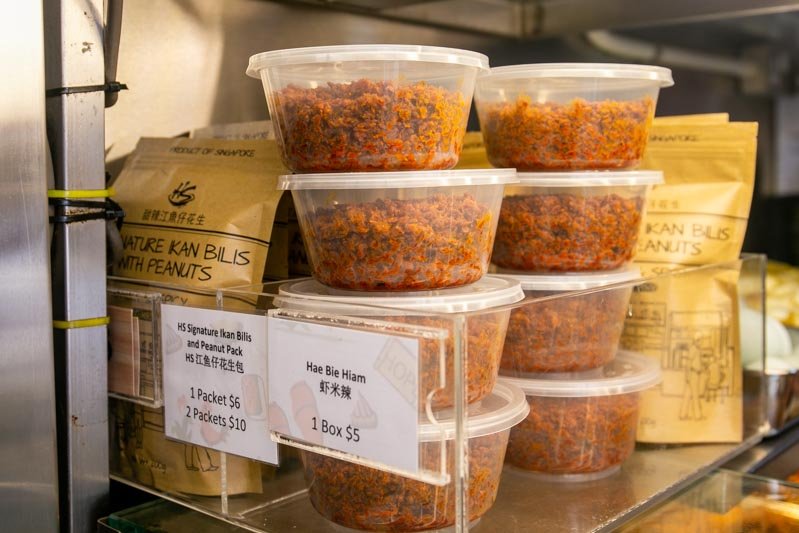 But don’t just take my word for it. Apparently, it’s so popular that Hong Seng Curry Rice even retails it in packets! Of course, since we were having Hainanese Curry Rice, we had to top off everything with a load of curry sauce.

What immediately caught our attention was just how thick and luscious the curry sauce was. 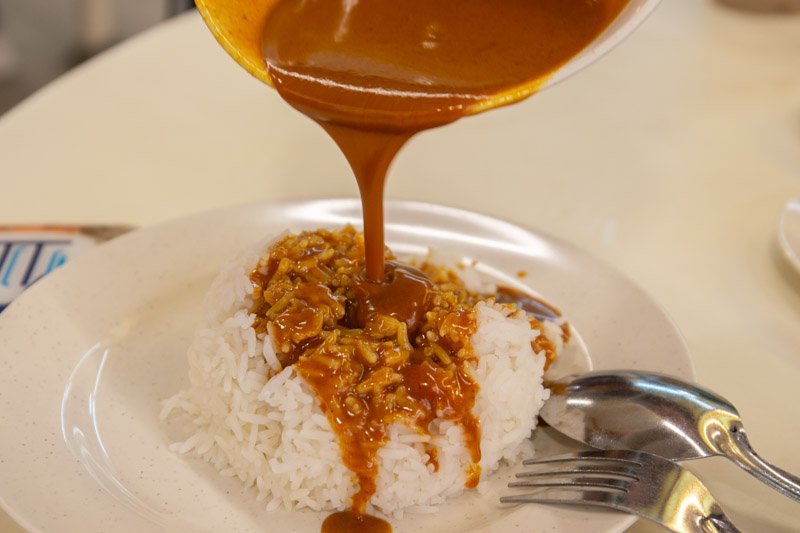 For one, I love drenching my rice with plenty of sauce. Hence, the thick curry was perfect for me as it managed to coat every single grain of rice. Furthermore, the curry had a tolerable level of spice. There was a very nice balance of sweetness and spiciness, which we enjoyed thoroughly. With an impressive repertoire of 23 dishes, I can definitely find myself returning to Hong Seng Curry Rice to try their other dishes.

Not only that, but you also don’t have to worry about them overcharging as some cai png stalls do. Hong Seng Curry Rice displays their price list clearly in front of the stall, so you can be sure you’re getting your money’s worth! Get A Taste Of Hong Kong With LiHo’s New Yuan Yang...