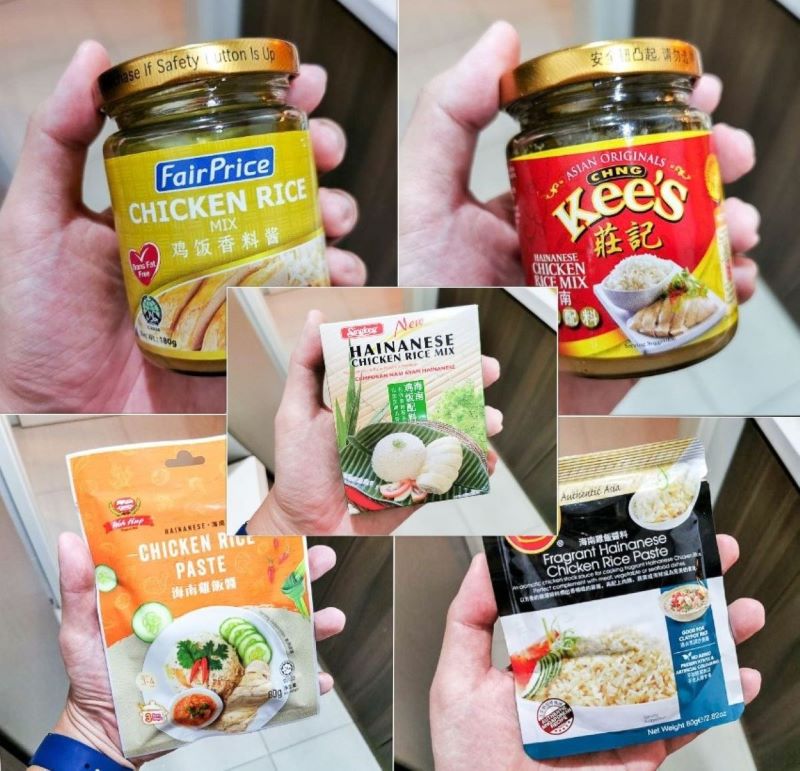 Singapore’s 55th National Day has just passed, and if you’ve been one of our readers who’ve also recently listened to our inaugural ‘Tapau Please’ podcast episode on 9 August 2020, you would’ve heard about our discussion pertaining to the significance of a national dish. In our local context, that’s none other than our beloved Hainanese Chicken Rice.

So, I wondered, what’s a novel way to pay homage to our long-standing famous and favourite hawker dish? I should pit five instant chicken rice pastes against each other and see which one comes out top! I mean, sure, it’s easy as hell to buy and tapau chicken rice almost anywhere, but there’s little thought given to the instant pastes lining the supermarket shelves.

The best part about these pastes is that you don’t have to only use them to cook rice; since completing this taste test, I’ve used the leftover pastes in stir-fries and broths. They work just as wonderfully!

But that’s not the point of this food showdown. Before I begin, the markers of quality I looked out for were taste, mouthfeel, aroma, and convenience. There were some considerations that I had to take note of, given that each bottle’s instructions were different:

So, before you get any hungrier, let’s start our showdown! The instructions on how to use Prima Taste paste can’t be any easier, with you having to dump 1.5 cups of rice and the appropriate amount of water. This makes it easy for even the most inexperienced person in the kitchen, making it a huge plus, in my books.

The aroma of the rice after it’d been cooked was pretty robust. There was an adequate amount of chicken stock fragrance, although no real nuances of ginger or pandan were detected. 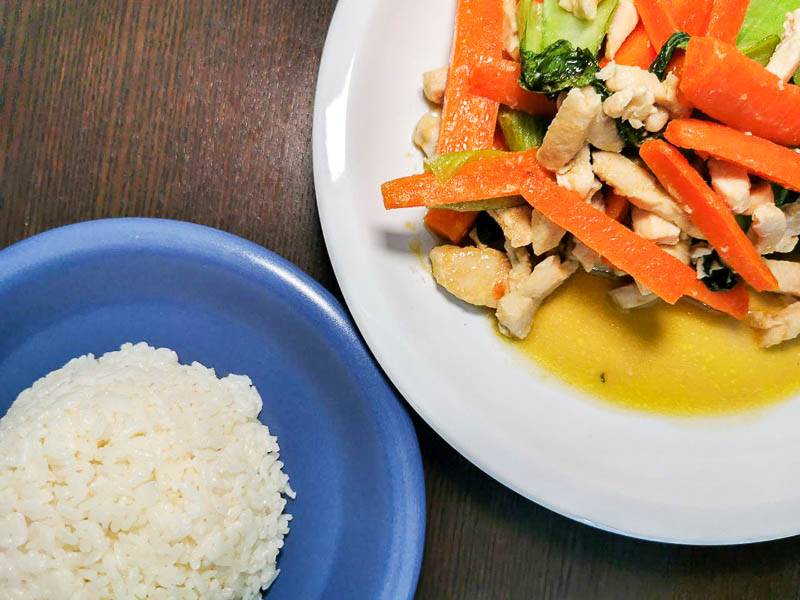 The flavour, just like its aroma, was slightly better. I could taste some essence of ginger, but for the most part, it really just tasted quite flat. The result wasn’t terrible, but I would’ve rated this as a sub-par plate of chicken rice if I’d had bought it from a stall.

The mouthfeel was also mild greasy, which made it quite palatable when paired with the chicken dish of the day—a simple stir-fry.

If I had to rate this, I’d give it a 3/5; it wasn’t amazing, nor was it terrible. It was only the first instant paste I’d used, so I was really hoping one of the other pastes would outshine this. 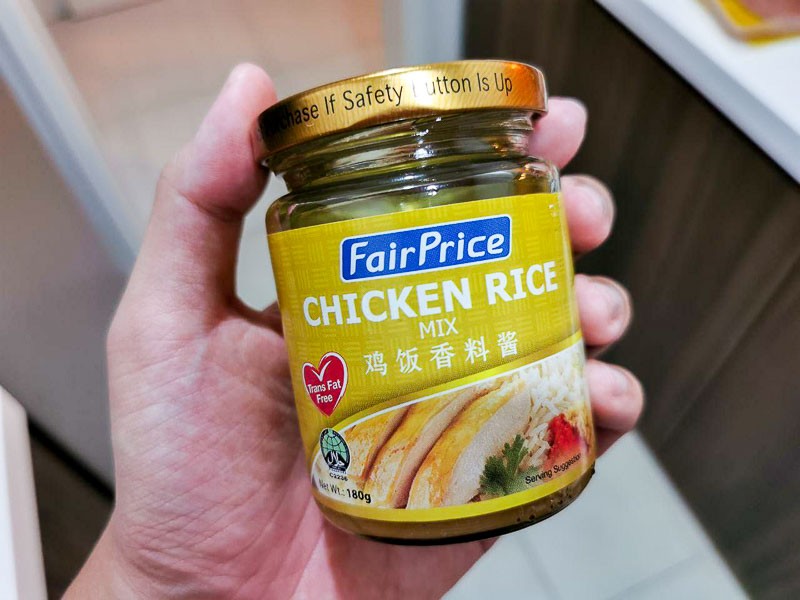 Fairprice’s chicken rice paste’s instructions are similar to Prima Taste, so hurray for kitchen noobs! The biggest difference was the portion of rice recommended for four persons. This means that if you’re cooking for the whole family, it takes out the guesswork of calculating your portions as it will be already done for you.

I did find it odd that they instructed me to use 1/2 a jar of the product in a single recipe, which sounds rather excessive for only four cups of rice. They also provided a measurement of water to cook the rice in, which, from an Asian homecook perspective, is a HUGE no-no.

As mentioned at the beginning, I stuck with 1.5 cups of rice, and adjusted the rice paste portion to 1/3 of the bottle.

Oddly enough, this chicken rice paste didn’t emit much aroma once it was cooked with the rice. When I opened up the rice cooker, I could smell that I was cooking something with rice and chicken, but I couldn’t distinctly tell it was chicken rice, if no one had told me. The taste, on the other hand, was much better than Prima Taste. It was a lot more complex and I could taste the fattiness of chicken, the sharpness of ginger in the aftertaste. As for mouthfeel, there was sufficient grease for it be incredibly enjoyable, with each grain satisfyingly slick.

I guess using half the jar for four cups of rice was worth it.

I would give this supermarket house brand bottle a 4/5 and I must admit, I was duly impressed by how complex it was. I don’t think I expected Fairprice to provide an instant paste this legitimate. I do, however, feel four cups of rice for four people is an overestimate. At first glance of Chng Kee‘s instant chicken rice paste’s instructions, it shared some similarities with Fairprice. They dictated how much rice and water to use, but the biggest difference is that with the same amount of rice, they suggest it’s sufficient to feed six to eight hungry mouths.

Just like Fairprice, I used the same 1.5 cups of rice to 1/3 bottle of instant chicken rice paste here, as both bottle’s instructions were identical.

The aroma of Chng Kee’s instant chicken rice paste was a heady number. It was a pleasure scooping up the rice on to my plate, and enjoying the glisten of the rice, all thanks to the ample fat found in the mix. I want to say the taste was as alluring as its fragrance, but it was an unfortunate let-down. Not to say, it was horrible, but it proved to be underwhelming and rather flat. It tasted of rich chicken stock, but not much else, sadly.

It was easy to give Chng Kee’s 2/5, especially when compared to the previous two instant chicken rice pastes. It didn’t give me much to be excited about, and after only a few spoonfuls, it tasted as if I’d scooped chicken soup onto plain rice, for flavour. The best part of Singlong‘s instant chicken rice paste is that it’s (supposedly) a single-use packet, so you don’t have to worry about what else you’d have to use the leftover paste for. The downside, however, is that it recommends you add pandan leaves to it, so it does require some pre-planning of purchasing pandan if you want to cook this.

Here, they don’t provide a measurement of rice in cups, which is a bummer because not all of us have food scales at home. They also provide a specific quantity of water to cook your rice in, which, again is a no-no and they even give the measurement in grams, not millilitres (odd, isn’t it?).

After some quick math, I found out 600g of rice is approximately three cups of rice, which is a hell lot if you’re only cooking for yourself or two people. So, in the end, having to only use this paste for two people (1.5 cups of rice and half the box’s instant paste), I ended up having to find some way to save and store this packet—an unnecessary inconvenience.

The unmistakable aroma of chicken rice wafted throughout the kitchen even before I opened the rice cooker. This paste, when cooked, will get you salivating very quickly, and in turn, impatient for lunch or dinner. I don’t know why but I was very happy to see that the rice turned out slightly stickier than when I cooked the previous three times. I must say though, the addition of pandan to the rice made a huge difference. The rice was sweeter, which balanced the richness of the chicken rice, overall.

As the rice was slightly wetter, the mouthfeel was also less greasy. Instead, the flavour was pronounced. My theory is that the rice somehow absorbed more of the paste as opposed to more coated outside each grain. I enjoyed this with my mother-in-law’s chicken curry and it made me such a happy woman!

For an unassuming brand, Singlong has proven to the best one yet. I would unashamedly give it 5/5, and I believe it not only had to do with the inclusion of real pandan, but also the better quality of the paste. Good job, Singlong! Honestly, after testing four instant chicken rice pastes thus far, I’m still baffled as to why some brands quote a measurement of water to cook the rice. I suppose this is for those who aren’t accustomed to rice-cooking? It must be my Asian privilege speaking.

No matter, Woh Hup’s rice measurement is less hilarious than Singlong’s 600g of rice, at only 350g. This translates to slightly more than my agreed-upon 1.5 cups of rice. This also means this instant paste packet is perfect for smaller meal portions, so there’s no need to think about how to store and/or use the leftover paste. Thus, I adjusted the instant paste to only 70g (approximately 4.5 tablespoons).

The oddest aspect of their instructions is the fact that they instruct you to boil water first, and then pour it into your rice cooker, before adding Woh Hup’s instant paste. Only then, do you add in washed rice. I’m unsure about their reasoning behind this process, but it certainly made me scratch my head.

The aroma for this paste was similar to Fairprice, in that it didn’t emit a slow breeze of chicken stock throughout the chicken when I opened the rice cooker. I actually forgot to snap a photo of the chicken dish I paired this one with, and conveniently, I also forgot what type of chicken dish I ate this with. I do, however, remember that I wasn’t necessarily impressed with how this chicken rice turned out. Especially when I was impressed with Singlong’s already.

The rice grains here felt very individual so there wasn’t any greasiness to enjoy. The flavours were very muted, and there were moments when I forgot that I was supposed to be eating chicken rice.

Easily the most meh one of the lot, I have to give this 1/5.

So, there you have it, folks! My breakdown of five instant chicken rice pastes led me to crown Singlong as one to deserve the crown, followed by Fairprice, which honestly, took me by surprise. All these instant rice pastes can easily be bought from any supermarket, but of course, it would depend on their stock availability.

Would I now start cooking my own chicken rice at home? If it’s this easy, yes, why not? Like I said in my introduction, these instant pastes can also be used for more than just cooking rice, so feel free to get creative with your recipes.