If you’ve ever been to Japan, you’ve probably seen small, mobile food stalls with minimal or no seating at all. These stalls are known as yatai, and usually sell ramen, yakitori and other sorts of street food.

Here in Singapore, there’s a tiny Japanese stall named Kyodai that can be found right at the base of Hotel Mi along Bencoolen Street. Kyodai, according to one of its owners, Kevin, is an attempt to mimic Japanese yatai. 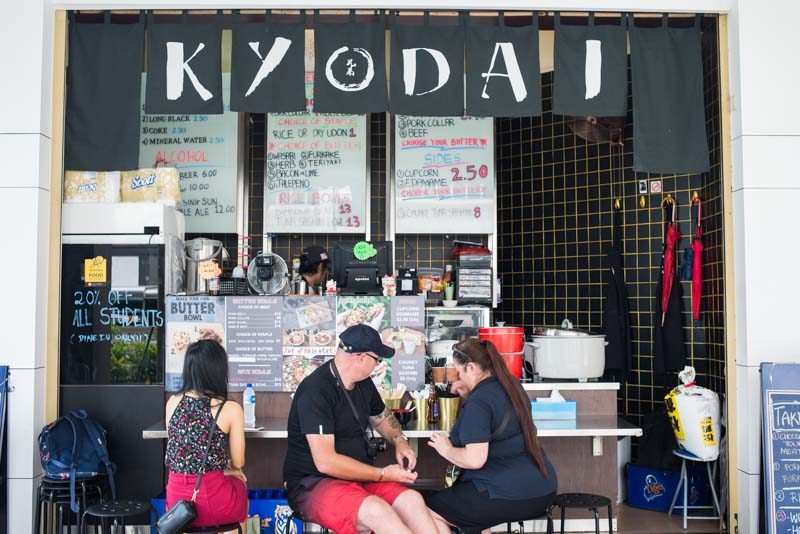 Although the place is clearly not mobile, Kyodai does display certain yatai elements. The seating here is minimal, with only about five or six seats. The food that’s served is quick and easy to eat as well.

I think I’ve droned on enough about the look and feel of the place. I mean, obviously, I didn’t come all the way here just to examine its appearance. Let’s get into what I really came here for — the food. 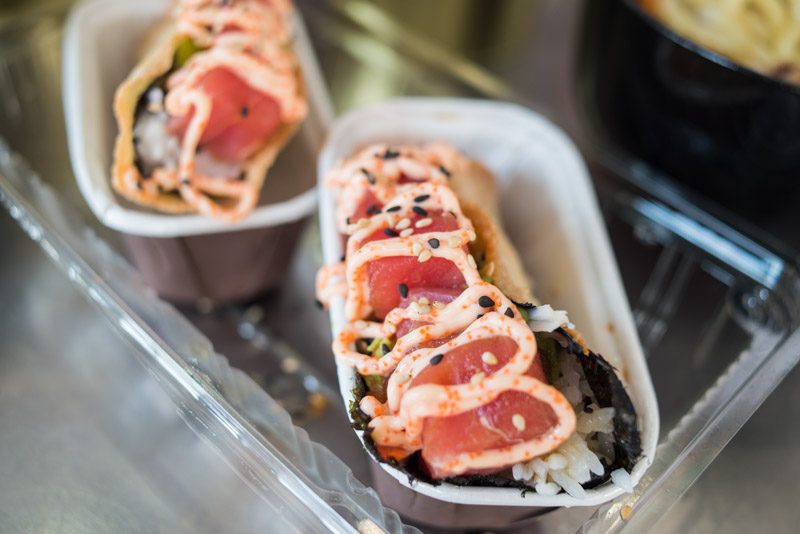 First off, Kyodai offers something called Gyocos, as in gyoza + taco = gyoco. Simply put, it’s a Japanese-style taco with crisp gyoza skin used in place of a tortilla. I had the Tuna Gyocos ($8.90 for two).

The gyoza skin is first deep-fried using a taco mould, then layered with nori (seaweed), and packed with sushi rice, cucumber, avocado and tuna sashimi. A Japanese mayonnaise-based sauce is then drizzled over the top. 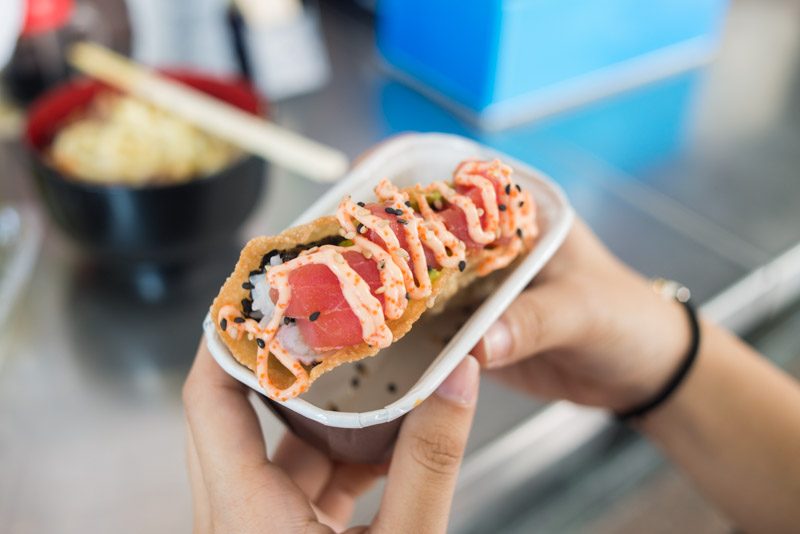 I guess you could think of it as a California handroll, but with tuna instead of crab stick. It looks rather elegant, and highly enticing.

So of course, I took a huge first bite without any hesitation. And I immediately thanked the heavens that this divine combination of sushi, taco, and gyoza has graced the earth, giving us the ultimate gift of yumminess.

First, let’s talk about that gyoza skin. It was deep-fried to crispy perfection, without being oily at all. The ingredients encased within the skin were all excellently seasoned, and very well balanced. 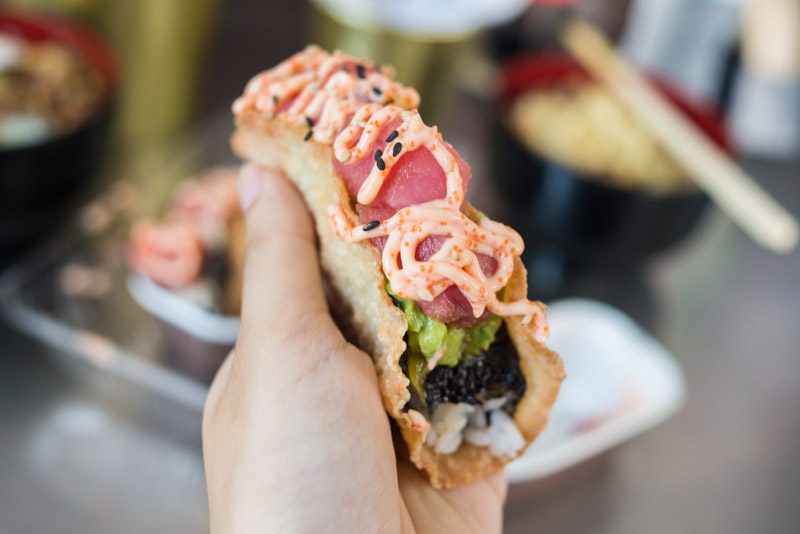 The creamy avocado paired well with the savoury tuna sashimi, while the crunch of the cucumber was the perfect complement to the soft rice. The sauce that was drizzled on top added more flavour and creaminess to the dish, making it complete.

Though you might find $8.9o a little pricey, the portion of tuna sashimi is very generous, so I’d say that these Gyocos are worth their price. Moreover, it’s literally one-of-a-kind. 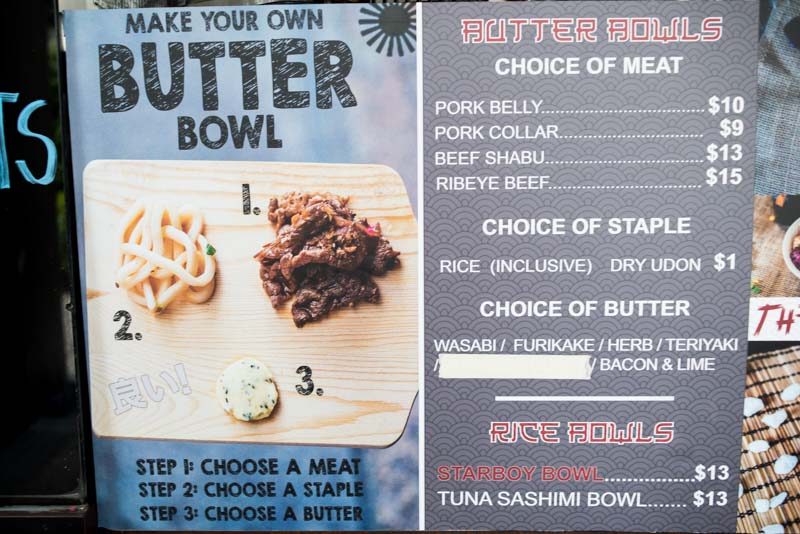 Besides the Gyocos, Kyodai serves Butter Bowls which are also rather unique. Apart from being able to choose your protein and carbohydrate base, you can also choose what flavour of butter you would like.

They have wasabi, furikake, bacon and lime, herb and teriyaki butter. I thought this was really inventive because usually butter is just, well, butter. Anyway, I had the Beef Shabu ($13), with Dry Udon ($1) and Wasabi Butter. The whole thing was topped with a glorious onsen egg, fried shallots, and some Japanese pickles. Of course, this could only be enjoyed once I’d mixed everything together. 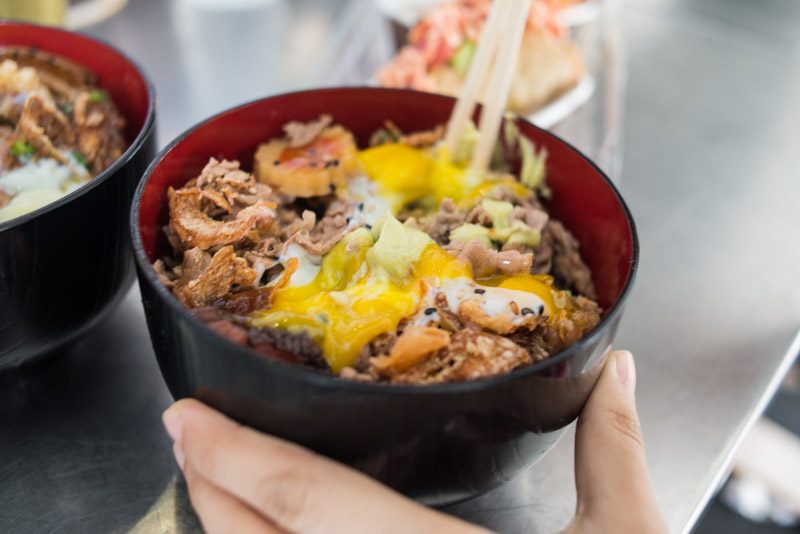 The Dry Udon, thankfully, wasn’t dry at all. Because the udon was coated with butter before being served, then mixed with the fragrant wasabi butter, each strand of udon was smooth and very flavourful. I liked that the wasabi didn’t sting at all, because I can’t imagine having to finish a whole bowl with my nose, eyes and mouth on fire. Instead, the wasabi flavour was mellow, yet it still permeated the dish, making the udon incredibly fragrant. 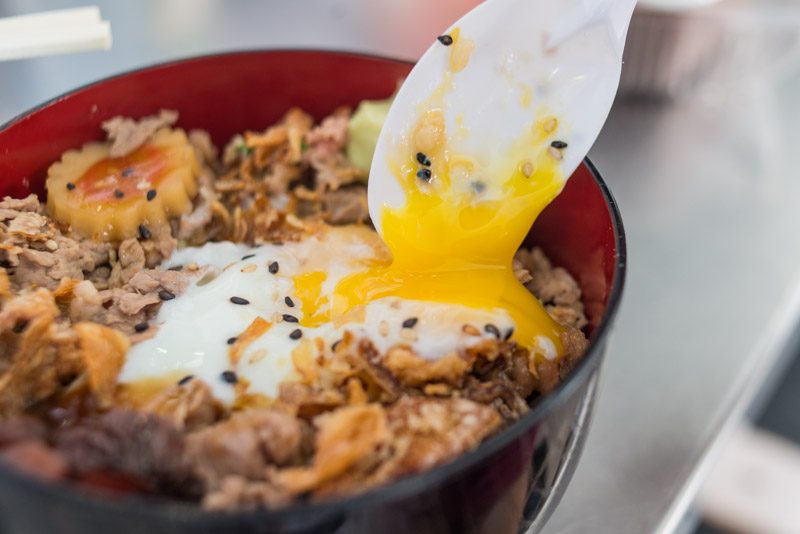 The Beef Shabu was tender and fell apart in my mouth without much effort, while the onsen egg made the dish richer. All the ingredients were in perfect harmony with each other, making this a truly stellar dish.

My only gripe would be that the butter was just a little cloying after a while, but definitely nothing dire enough to stop me from eating. 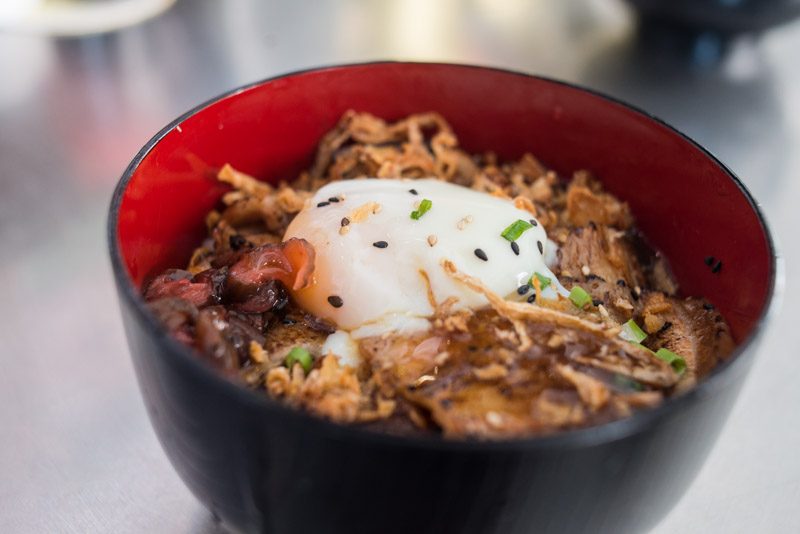 Kyodai also serves something called the Starboy Bowl ($13). It’s basically a rice bowl, with pork belly that is cooked sous vide for 10 hours then blow-torched, topped with an onsen egg, some crispy fried shallots and garlic, and tart Japanese pickles.

I absolutely need to rave about the pork belly. At first, I wasn’t expecting much because the pork belly appeared dry and tough. But, much to my delight, the meat was so tender, it disintegrated in my mouth. 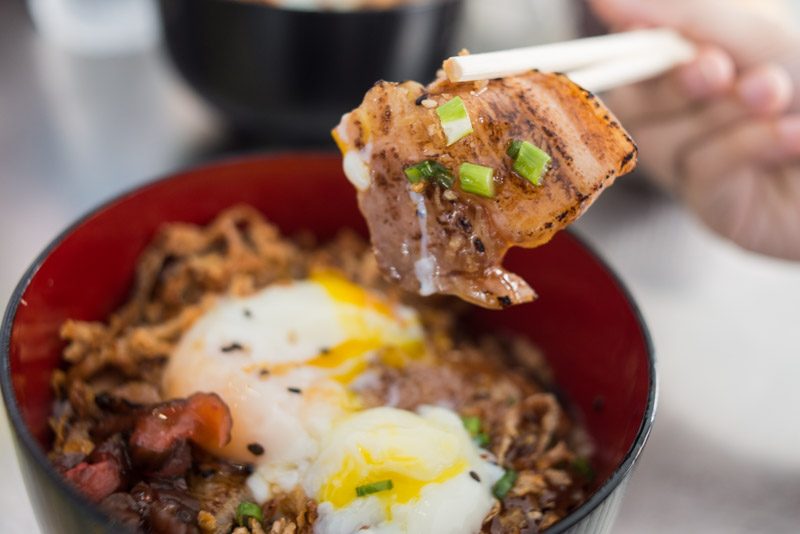 The flavour was sweet and highly addictive, and I literally couldn’t stop devouring slice after slice. I also loved the fried shallots that gave the dish a pleasing fragrance and crunch. Oh, and how could I forget the egg? When mixed in with the rice, the result was an incredibly smooth spoonful that really hit the spot.

Overall, it was an extremely hearty dish that I could see myself coming back for again. While Kyodai might look small, it serves food with ambition. Hearing Kevin describe the dishes to me, I started to understand the backbreaking work (the innumerable trials, errors and brainstorming) behind the food that was served, and was thoroughly impressed.

It’s food that is genuine, well thought-out and extremely delicious. I’m already planning my next visit!

Previous articleDai Lou(大佬): Join The Gang For Cantonese-Style Zi Char & Sumptuous Seafood At Punggol
Next articleDouble Your Guests’ Happiness This CNY With 1-For-1 Cold Stone Creamery Ice Cream Till 28 Feb 8 Japanese Restaurants In Singapore To Get Free Upsize For The...