Where to eat: 15 best lor mee stalls to visit in Singapore

Lor mee is not one of the more internationally renowned Singaporean dishes, but Singaporeans love this Hokkien dish with flavour-packed, sticky gravy and springy broad noodles. Traditionally, fried fish bits were added to lor mee, but now many stalls replace it with fried batter instead.

It is a dish that looks deceivingly simple to prepare, but most fans will agree that very few stalls cook it right.

Lor mee lovers like myself will also feel that it is hardly raved about and that it feels like a niche Singaporean dish at times. The dish deserves so much more attention in my opinion, and so here’s a list of 15 best lor mee stalls that you will want to visit if you’re looking for lor mee that packs a massive punch. 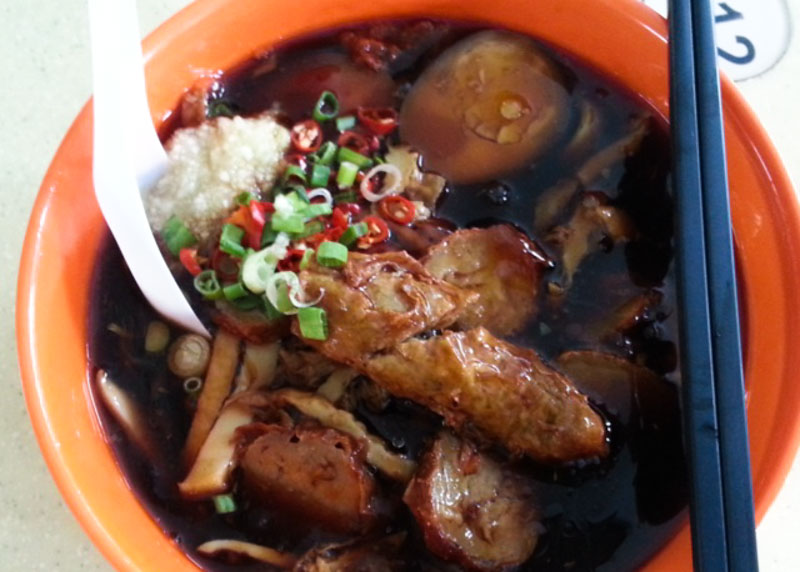 Lorong Ah Soo Lor Mee (羅弄阿蘇卤面) is a stall in Hougang that’s been highly lauded by many other media platforms as well. This stall is recommended for those who prefer their lor mee to have a stronger flavour, and a bowl starts from S$3.

The gravy here is a little on the salty side but many people swear by this bowl of lor mee. The ingredients also come in rather generous portions!

There is an assortment of ingredients used like shredded duck and ngor hiang, while generous amounts of garlic and vinegar are added for that powerful punch in the gravy.

A hot favourite in the West, Yew Tee Feng Zhen Lor Mee (凤珍卤面) has been satisfying countless customers in the S11 hawker centre near Yew Tee MRT station with their delightful recipe. There’s another similarly named Feng Zhen lor mee stall at Taman Jurong, which is supposedly run by relatives.

The gravy here is spectacular, and the Traditional Lor Mee (S$4 onwards) comes with crispy fried pork balls which is a specialty here. They also serve fried prawn rolls that make an excellent side for this Singaporean favourite. Amoy Street Food Centre houses some of the all-time favourites, in terms of hawker food. As one of the “star” stalls, Yuan Chun Famous Lor Mee (驰名源春卤面) serves hundreds of bowls of lor mee daily to its many hungry customers.

While standards have been reportedly falling over the years, this stall still ranks high up the list if you are looking for a thick, delicious bowl of Lor Mee (S$3 onwards) around the CBD area.

Fu Hui Wanton Mee & Lor Mee (福惠云吞面•卤面) is located at a non-descript small coffee shop within the HDB estate in Bishan. Despite this, the stall sees long queues of customers who are eagerly waiting to get their hands on the lor mee here.

While most people order the S$3 portion, I always go for the S$5 portion as it gets me another bowl of fried fish with it. For those who love crispy battered fish to go with their lor mee, Fu Hui is the one for you. A stall with decades of experience, Soon Lee Lor Mee (顺利卤面汤) serves Lor Mee (S$3 onwards) that customers have been raving about. The lor mee gravy here is a major highlight, especially with its fragrant well-braised pork flavour.

Once you add the garlic and vinegar, your taste buds will thank you. It is almost as though you can taste all the years of effort that has been put in to perfect the recipe.

178 Lor Mee (卤面178) is one of the gems found at the landmark Tiong Bahru Market. One of the highlights of this stall is that they offer a version with shark meat instead of traditional fish.

Expect a load of crispness with the Lor Mee (S$3, S$4 with shark nuggets) from this stall too. One of my favourite parts of this dish is the crispy batter that goes perfectly with the gravy. Simply heavenly! 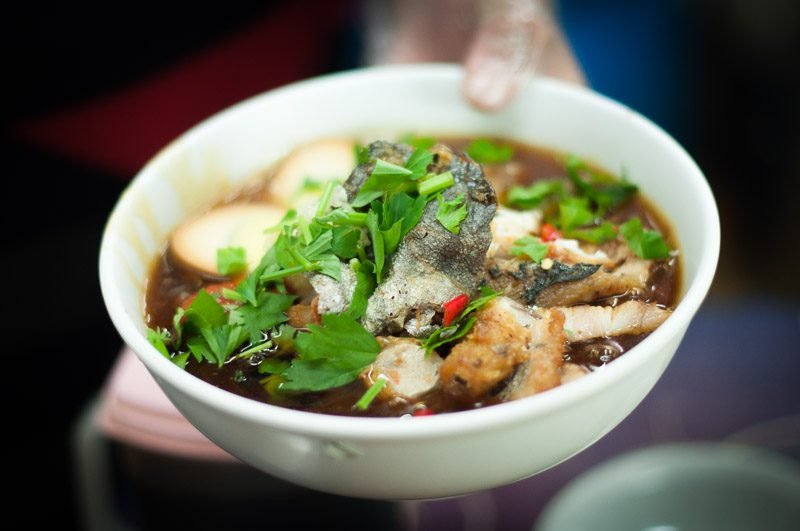 This other well-loved Lor Mee stall in the Old Airport Road Food Centre does not disappoint. Tiong Bahru Lor Mee (中峇卤面) prides itself with having more than 50 years of experience, and trust me, you can definitely taste it. The gravy is my favourite part of this stall’s Lor Mee (S$2.50 to S$4).

The well-balanced thick gravy harmonises the tastes of spices, garlic, and other secret ingredients, and it’s sure to make you slurp down this bowl of goodness. 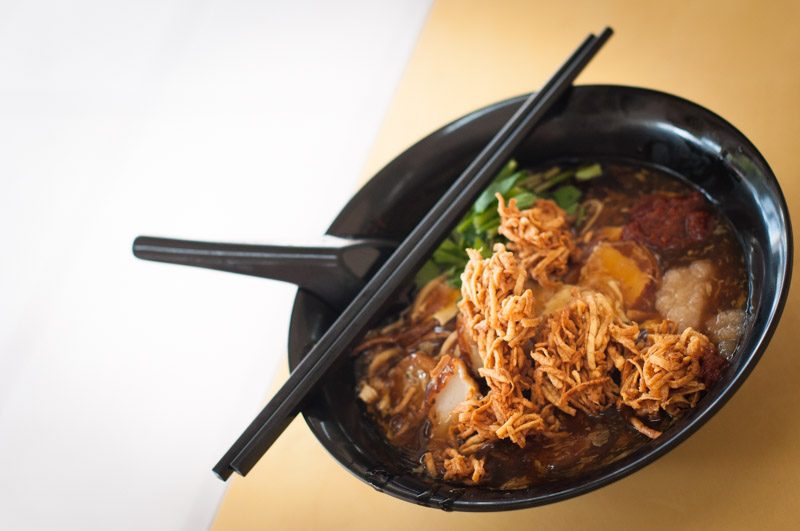 Arriving at Zhi Xiang Special Lor Mee (智翔特制卤面) in Toa Payoh, one of the first things that might catch your attention is a sign that says ‘No MSG’.

For hawker food, that is certainly rare and it’s a key factor to draw in crowds of health-conscious customers. There is no need to worry about the latter as this stall serves up a mean bowl of lor mee.

Their Lor Mee (S$3 for small, S$4 for large) also has fried shredded yam with noodles instead of the usual fried fish. For those that love the crispy texture of fried yam with the soft and slightly chewy insides, you will love this version of lor mee.

Established in 1988, Ah Ma Lor Mee is helmed by the third generation folks from Feng Zhen Lor Mee (Taman Jurong). Speak about good food running in the family. Also located in the Western part of Singapore, head on over for a quick taste test and see if it tastes akin to the OG bowl of lor mee. Queuing for food is often dubbed as Singapore’s national pastime. Many would already have heard of Xin Mei Xiang Zheng Zong Lor Mee (新美香正宗卤面) located at the Old Airport Food Centre, known for attracting long queues that can be spotted even from the main road.

Huge portions of ingredients and the thick, five-spice braised sauce are just the start of the many reasons people love the famous Lor Mee (S$4 to S$6) here. I can never get enough of it (I get the S$6 portion every time).

Do check on their Facebook page before eating here as their opening hours are irregular at times.

Soon Heng Lor Mee serves up excellent bowls of lor mee for only S$2.50. Talk about a steal. Head on over to Beo Crescent Market for a bowl of thick and luxurious gravy with springy noodles. Many have raved about how they’re “surprisingly good”.

Clearly an underdog in comparison to the many lor mee stalls around but who can complain when it does the trick in satisfying your cravings?

Starting out at the foot of “Ang Sua” (Bukit Merah) in the ‘70s, Keng Heng Whampoa Teochew Lor Mee, has come a long way. From being popular with labourers, their warm and hearty bowl of traditional Teochew lor mee is still a cult favourite amongst many. At Keng Heng, all they intend to do is try and preserve history—one bowl at a time.

Originated from the hawker’s father who used to sell lor mee behind Jit Poh Building (Keppel Road) during the ‘60s, Amoy St Lor Mee only serves S$3 and S$4 bowls whereby the S$4 bowl comes with extra fish. However, the bowls don’t come with braised egg, however, you can request a lava egg if it’s available.

Good food always brings in the crowd as such, the queue can get generally long here and it may take about up to half an hour for you to get your food. Try to avoid peak hours, if possible.

Frequently filled with long queues, Jue Dai Lor Mee seems to be quite the hit at Hougang with affordable prices ranging from S$2.80 to S$4. The stall sells four variations of lor mee that differ by their key toppings.

A traditional bowl of Lor Mee (S$4) comes with braised pork slices, a half-boiled egg, fried fish and yellow noodles in a thick gravy. Sounds delicious, huh? Like every other famous stall, be prepared to queue for your food.

Now, I know many of you are huge fans of Bukit Purmei Lor Mee so it’s obvious that this stall has to make the list, right?

Been around since the ‘50s, this is one stall that’s been moving around for a bit. However, after suffering from two heart attacks, the famous Uncle Teo had to close down his stall, and we thought that was history. Here’s the kicker, their new outlet, now reopened in Bugis, is run by Uncle Teo’s nephew. As usual, be sure to keep a lookout for the snaking queues to get yourself a bowl of this famed Lor Mee (S$3.50/S$4/S$5).

There you have it. If you’re craving a piping hot bowl of gooey goodness, you have 15 places to choose from. Alternatively, if you know of more hidden lor mee gems we should check out, do let us know!