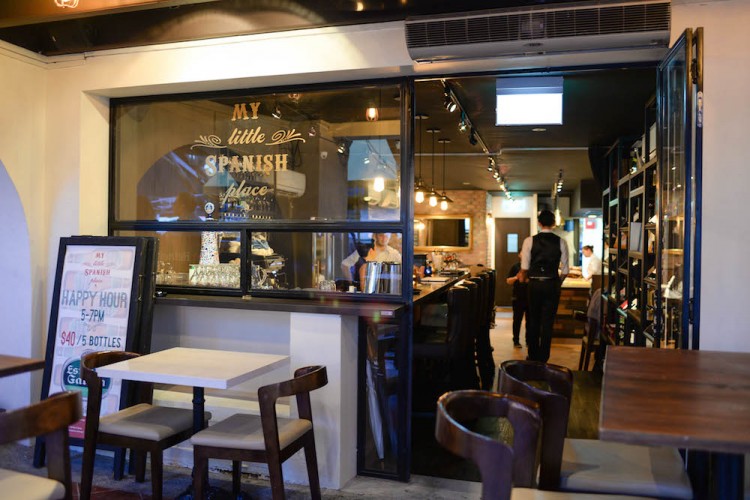 Prepare to be whisked away to Spain when you step into this unsuspecting, cosy restaurant at Boat Quay. The brick walls and wood furnishings of My Little Spanish Place makes it look rustic and cosy, and with the warm lighting creates an inviting look. Mesons are typical home-style restaurants found commonly in different parts of Spain; so you get a feel of what it is like to be Spanish local in one of their casual eateries. This outlet at Boat Quay is the second outlet in Singapore, with the first at Bukit Timah which was founded 2010.

I quite like the ambience at My Little Spanish Place’s Boat Quay outlet though, because on cool days you can dine by the river, which can make for a casual gathering for friends or a romantic date. 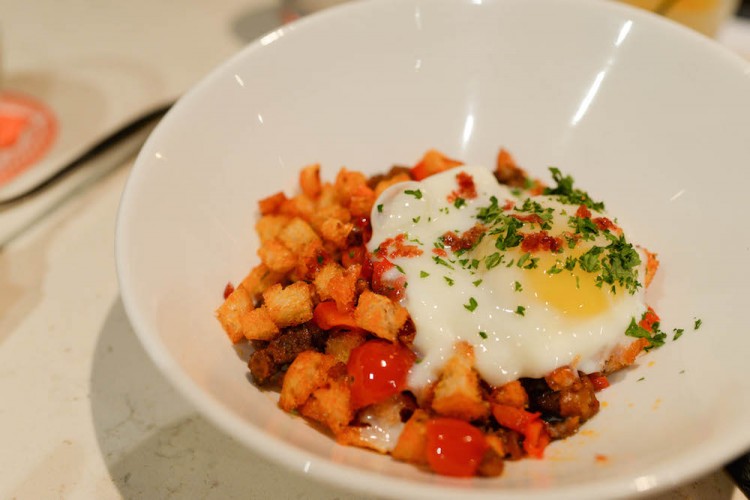 The portions are made for sharing, so the more, the merrier. We started off with the Migas ($8/serving), which was a real pleaser. A mix of croutons, tomatoes, peppers, soft-boiled egg and chorizo, it was savoury with a nice crunch.

They make those croutons in the restaurant, and while the Migas is traditionally served with a fried egg, I liked how the chef switched it out for a soft-boiled egg – so you can mix it with the rest of components, creating with a lovely, eggy mess. Next was the Pulpo De La Casa ($36/100 grams) or octopus dish. Sliced into bite-sized pieces, the octopus itself was nice and fresh with a chewy texture, and depending on what you like, you can have it with the red pepper or potato purée smeared artistically at the ends of the plate.

The red pepper has a mild kick while the potato is light but makes it taste creamy. Both are quite pleasing on the palate. The Champiñones al Horno ($15 for 3 pieces) is made up of juicy mushrooms baked with Mahon cheese, a cow cheese that gives the dish its saltiness. In contrast the sauce drizzled over, made of red wine and sherry vinegar reduction, is a little sweet and sour and balances this tapas item. 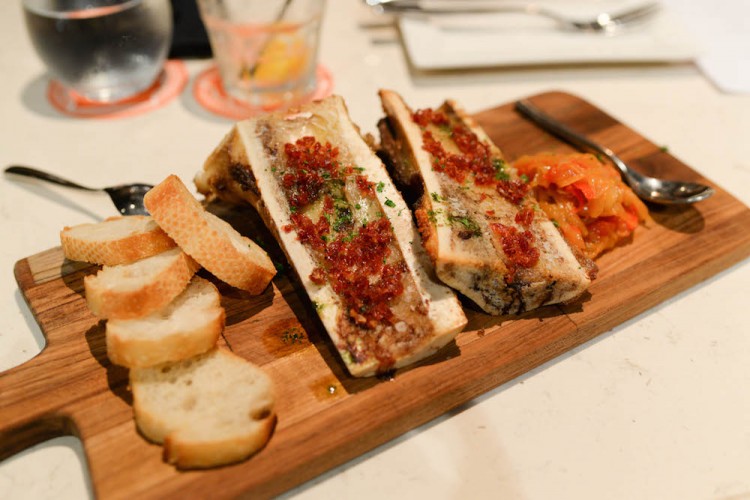 If you are feeling a bit indulgent, you can treat yourself to the Tuétano de Ternera ($21 for 2 pieces), a roasted veal bone marrow topped with Serrano ham, with caramelised onions and peppers on the side.

The ham gives a bite to the otherwise fatty and soft bone marrow, which is very rich, and has a slightly gamey taste. If you are not accustomed, you can eat it with the onions and peppers, specially served to cover it. 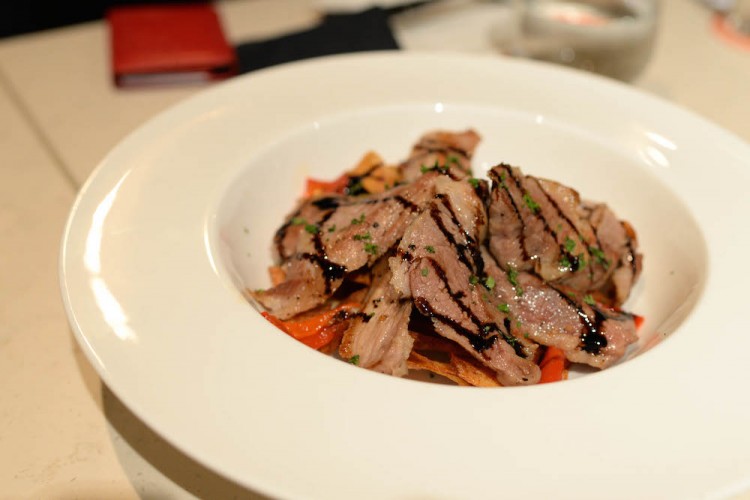 Secreto Iberico ($28) is a pork dish that is smoked with apple wood, served with peppers and potatoes. The meat was a bit difficult to chew, but I liked how the potatoes were presented – in thinly sliced pieces, fried into crisp chips which were quite appetising. 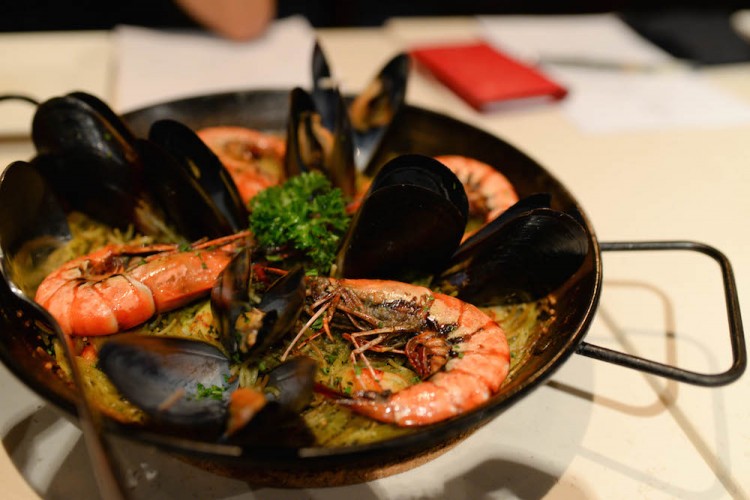 Now we have all heard of paella, a Spanish traditional rice dish, but My Little Spanish Place’s rendition is made with noodles instead! The Fideuá Verde ($38 – Small, $66 – Large) is a noodles paella with seafood.

This noodles version is traditional in certain parts of Spain, and definitely interesting to me because I have not seen it in Singapore. The short noodles are a bit green, as they are marinated in a spinach seafood broth. It is tasty on its own, but eat it with their house made garlic aioli for extra flavour and punch. The aioli complements the noodles without overpowering, giving off a nice garlicky flavour. 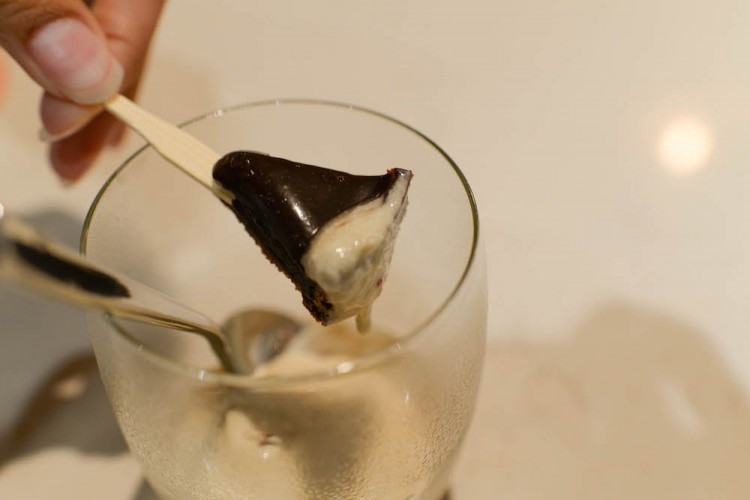 Finally for dessert, we had Leche Merengada con PX ($12), homemade meringue milk ice cream with Pedro Ximenez dessert wine. Phew, that is a mouthful. I assure you though, the taste of it is simply sublime and will leave you wanting more. The milky ice cream is sweet, balanced with savoury bits of ham.

Yes, you heard that right. Sort of a salted caramel thing (but with ham), a sweet and salty combination. The wine also gives off aromatic notes of fig and prune, and the small slice of the decadent, chocolate tart is rich and velvety. 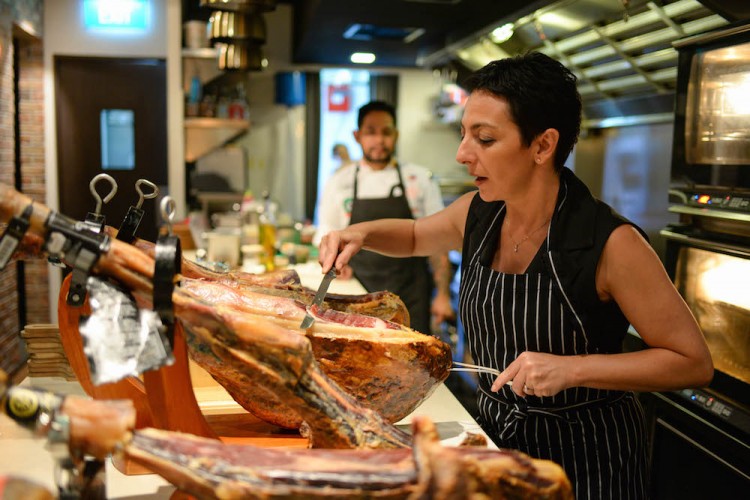 If you want casual dining and authentic Spanish food, look no further. I loved the relaxed mood of My Little Spanish Place, and the foods sit very well with my taste buds indeed, so much so that it is difficult to pick a favourite. They have many more items on the menu, such as their hand-carved hams which come in five different types.

Prices are slightly steep, but worth every dollar and cent if you are looking for the real deal. Will definitely be back again to try more at My Little Spanish Place.