Doesn’t it just suck when supper cravings kick in late at night, but there aren’t any food places still operating?

Among a row of dark restaurants though, shines a beacon of light: Pandan Gardens Fishball Noodles (PGFN) at Keat Hong Community Centre, which is open for 24 hours. The original PGFN stall is located at a coffee shop in Pandan Gardens, and was founded by Mr Seow and his wife Mdm Leow in 1982. Their two sons, Javier and Valent, have always wanted to pursue a career in F&B, but never thought it would be through their parents’ business.

The siblings unexpectedly found their opportunity to enter the food industry when they suggested expanding the family brand into three more outlets at Keat Hong, Punggol and Bukit Batok. Their sister is also involved in the operation of the family business. 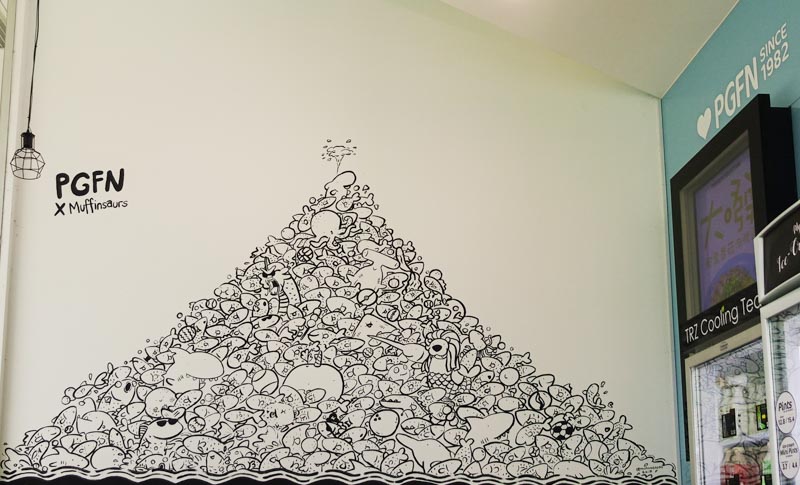 While the rest of the extended outlets kept the hawker stall concept, the Keat Hong Community Centre (KHCC) eatery features a casual setting. It was opened in 2017 and serves as the brand’s first flagship outlet.

The space has a young and hip ambience, with its wall doodles, bright colour palette and ice cream cases. 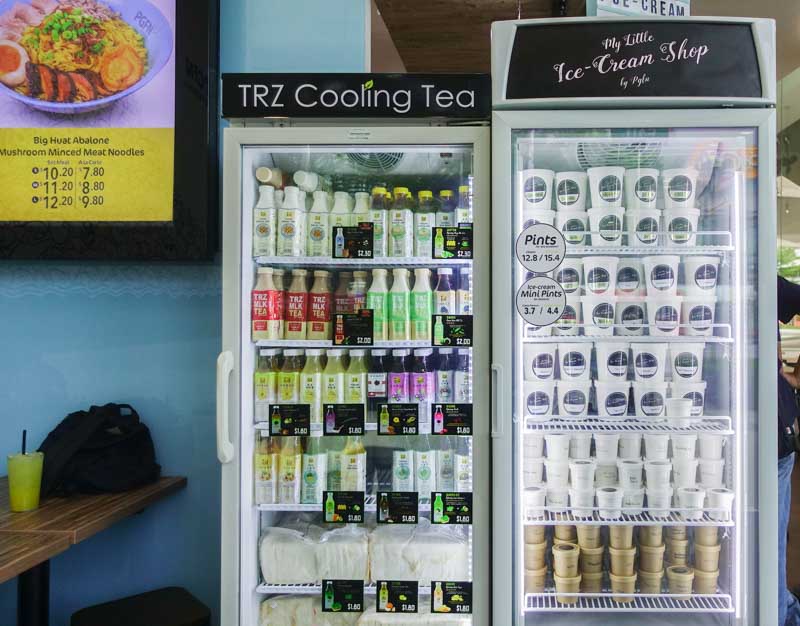 During lunchtime, you can expect queues of workers and students — which goes to show how popular they are. 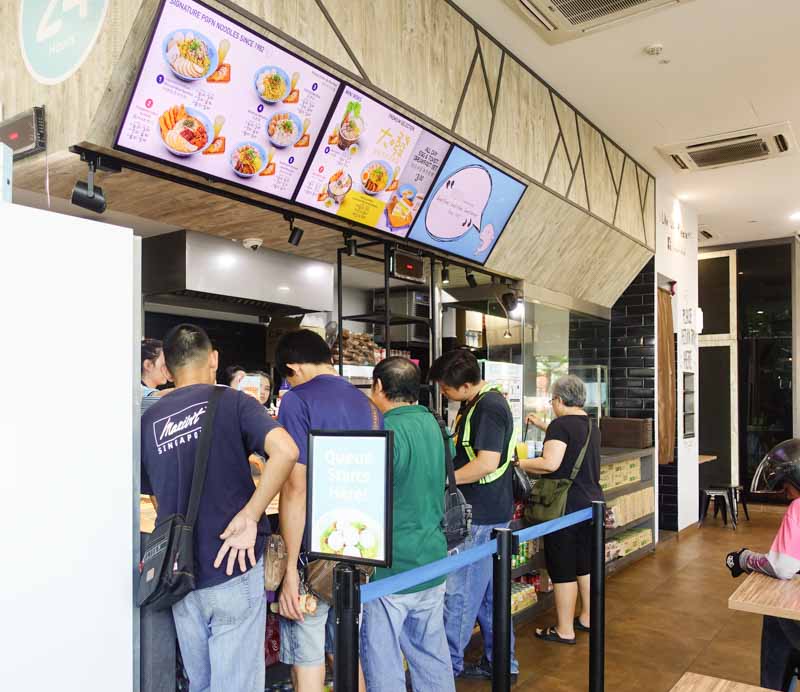 I wanted to see for myself what it was about the noodles that made the place bustling during peak hours. I decided on a few dishes to try: the Signature Fishball Minced Meat Noodles (S$3.90, small), Laksa Mini Wok (S$6.10, small) and their Premium Big Huat Abalone Mushroom Minced Meat Noodles (S$7.80, small).

Despite opting for the ‘small’ bowls, they are in fact the same size as regular portions elsewhere 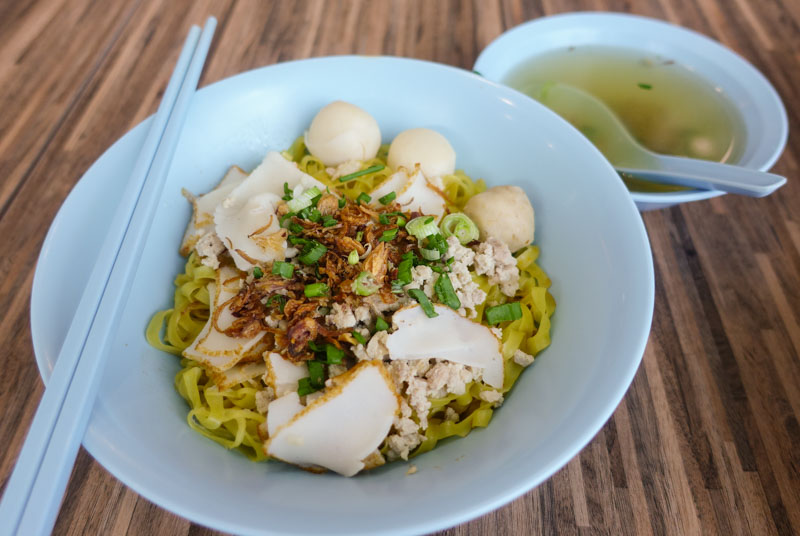 Naturally, I had to try their Signature Fishball Minced Meat Noodles. At S$3.60 for a “small” bowl, the portion of noodles is actually quite substantial and hence really value-for-money.

You can find your usual ingredients like fishballs, meatballs, fishcakes, minced meat and mushrooms, with an accompanying small bowl of soup.

Some may not pay much attention to the soup, but I find that it plays a pretty important role when eating mee pok. I was glad to find out that the broth was packed with flavour and Javier told me that it’s made with fish stock and fresh pork. 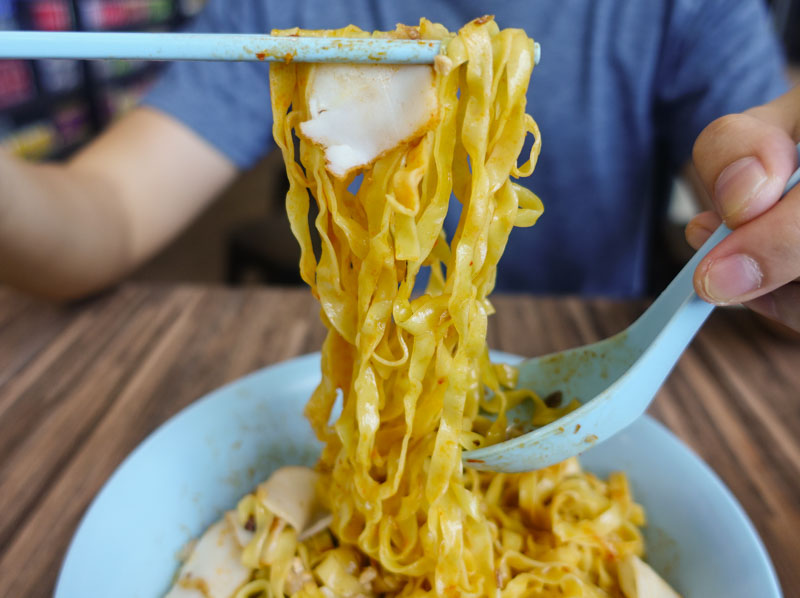 When eating fishball noodles, one thing I look out for is the noodle texture, especially after I drizzle spoonfuls of soup to soften them up. Thankfully, this bowl of mee pok was springy and chewy, surprisingly good even when they’ve turned cold after half an hour.

I opted for chilli with my mee pok, and after mixing it well, the noodles soaked up the spice and amplified the flavour. 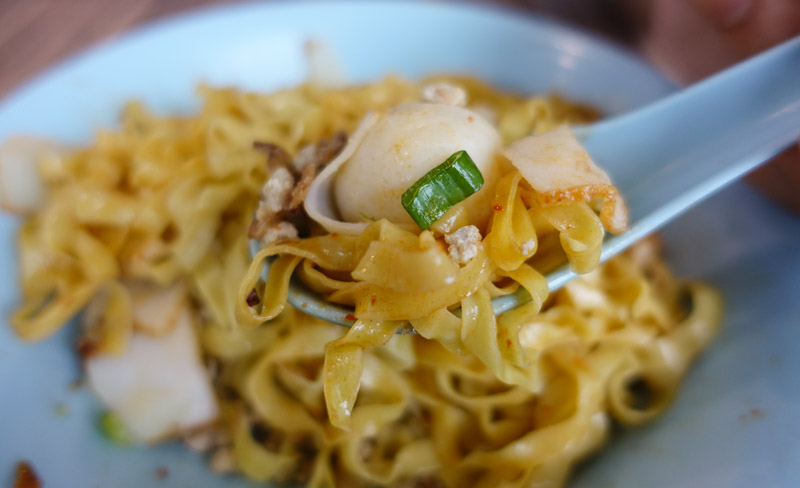 The fishballs were springy and decently-sized, while the meatballs had a firm bite. My only gripe was that there were only three fishballs and meatballs in total, since I would have enjoyed more.

Overall, I liked this bowl of mee pok and it ticked the taste and value-for-price boxes for me. 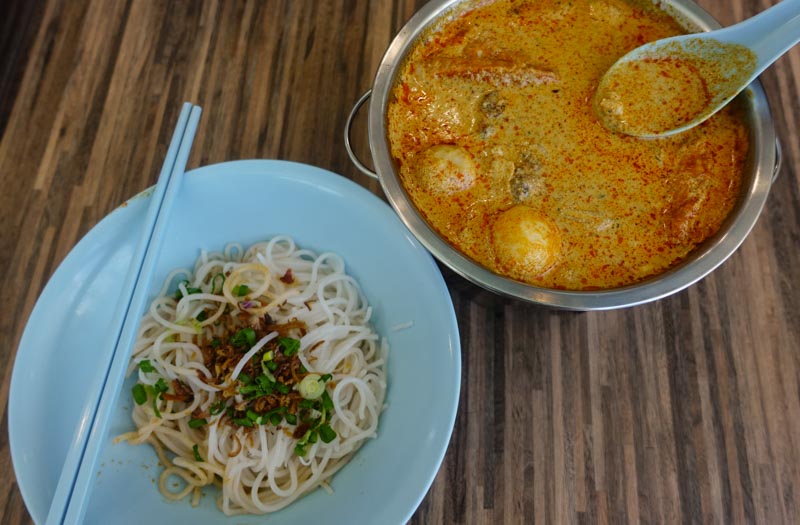 Another obvious choice to try was their Laksa Mini Wok (S$6.10, small), which was definitely not small. I opted for thick vermicelli, which is served separately from the laksa soup. I don’t really mind if my noodles are placed together with the laksa curry, but I appreciate the attention to detail.

The laksa curry came filled to the brim and is filled with your typical ingredients like fishballs, meatballs, tau pok, fishcakes and hum (which I opted for, because who eats laksa without hum?!).

The laksa curry was flavourful with a coconut milk base, and slid down my throat smoothly. The curry also packed a punch but didn’t cause me to choke on the spices.

I also enjoyed taking a bite of the tau pok after it has soaked up all the laksa goodness. 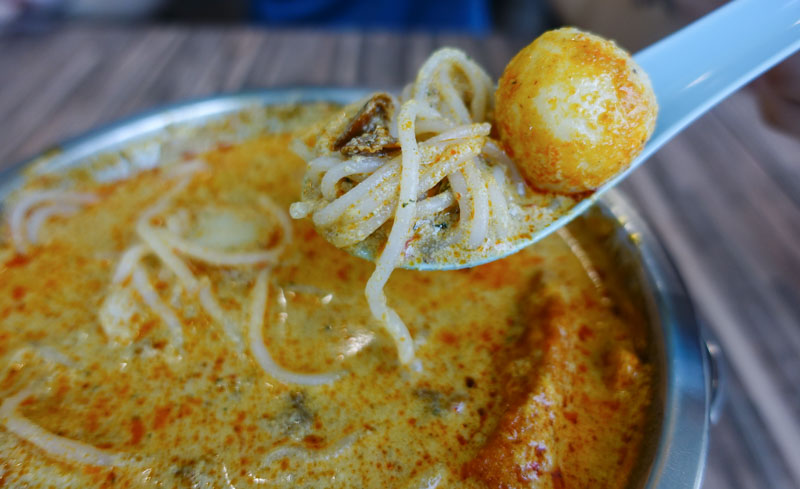 The vermicelli soaked up the curry without becoming soggy, and I recommend eating a spoonful of it with the hum (cockles) and curry for maximum satisfaction.

I was slightly disappointed that there were no prawns, a typical ingredient you’d find in laksa. Javier mentioned that PGFN’s laksa follows his mother’s original recipe, which does not include prawns, but has hum.

Though I would have enjoyed some prawns to go with my laksa, I still found it to be a pretty satisfying bowl. Next time though, I’d like to try their Singapore Laksa by PGFN (S$3.90, small), which is cheaper but has a similar portion of laksa. 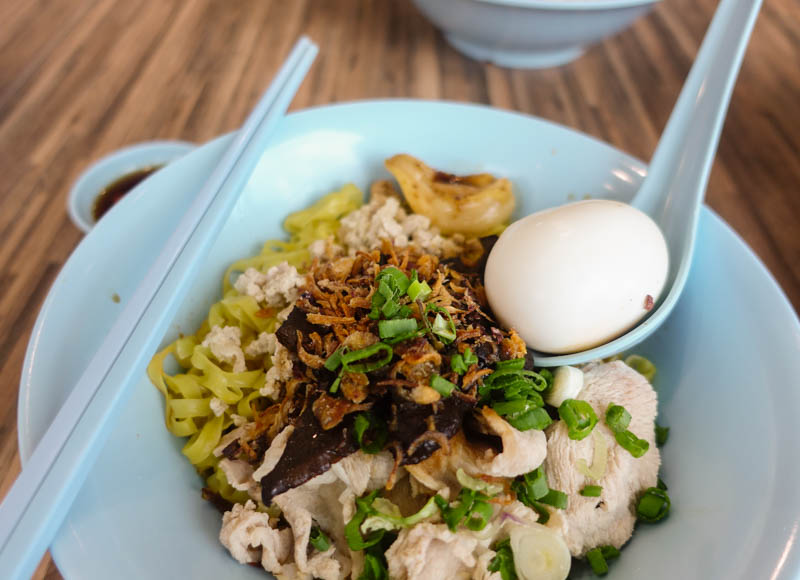 For the last dish, their premium menu piqued my interest, and I decided to go for the Big Huat Abalone Mushroom Minced Meat Noodles (S$7.80, small).

Judging from the name of the dish, I had high hopes for the premium ingredients. I was slightly disappointed to find out that there was only one piece abalone, albeit a soft, chewy and flavourful abalone. The dish would have been much improved with more pieces of abalone.

There was, however, a generous portion of sliced pork though, which was much appreciated. 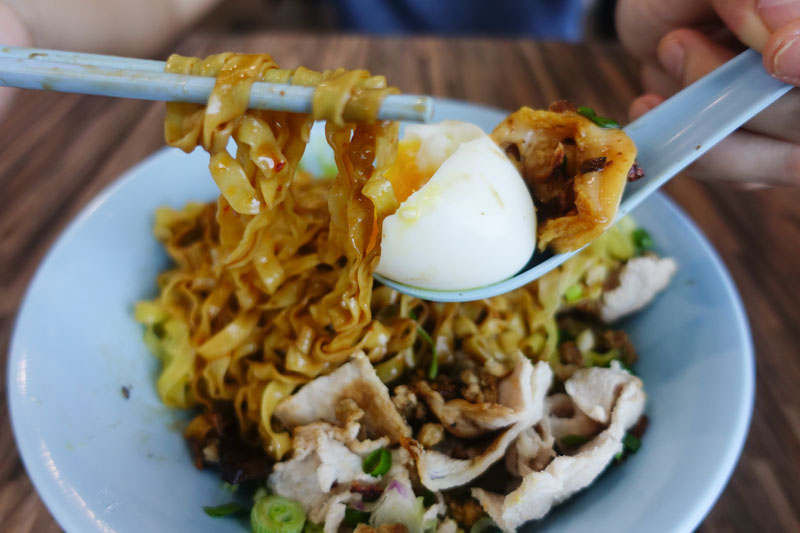 Chewy and springy as expected, the noodles were coated with a braised mushroom sauce, which gave it a savoury and slightly sweet flavour. 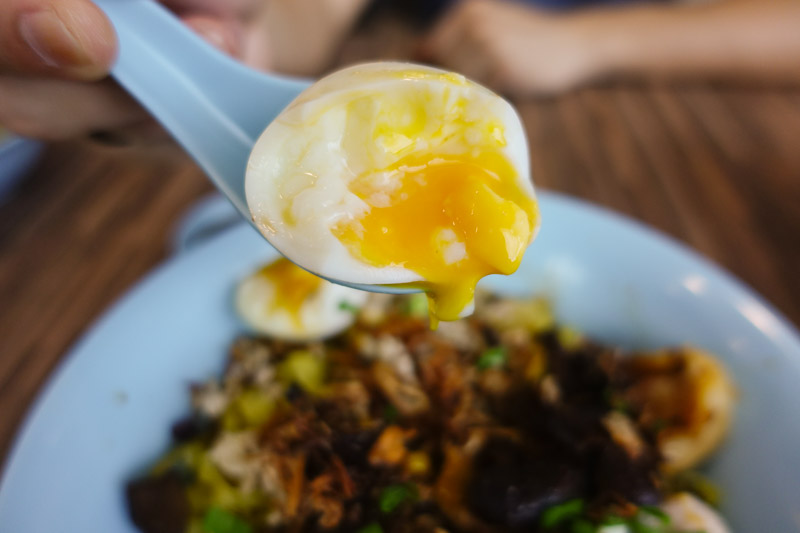 The dish also comes with a soft-boiled egg with the yolk still runny, which reminded me of ramen. The yolk also coated the noodles nicely when mixed together.

Personally, I felt that this dish was not as “premium” as I thought it would be. It would be more value-for-money to order their Signature Fishball Minced Meat Noodles (S$3.60), and add one ramen egg for S$1 instead.

Overall, I would definitely visit again for a simple but satisfying and affordable bowl of fishball noodles and laksa at Pandan Gardens Fishball Noodles (PGFN).

If you’re craving some comfort food after a late night out with your friends, why not head to PGFN at Keat Hong Community Club for your supper fix?