Old Airport Road Food Centre is home to many popular stalls, from Nam Sing Hokkien Fried Mee to Roast Paradise. While many might recognise the place for its food, its location actually holds much more significant history. 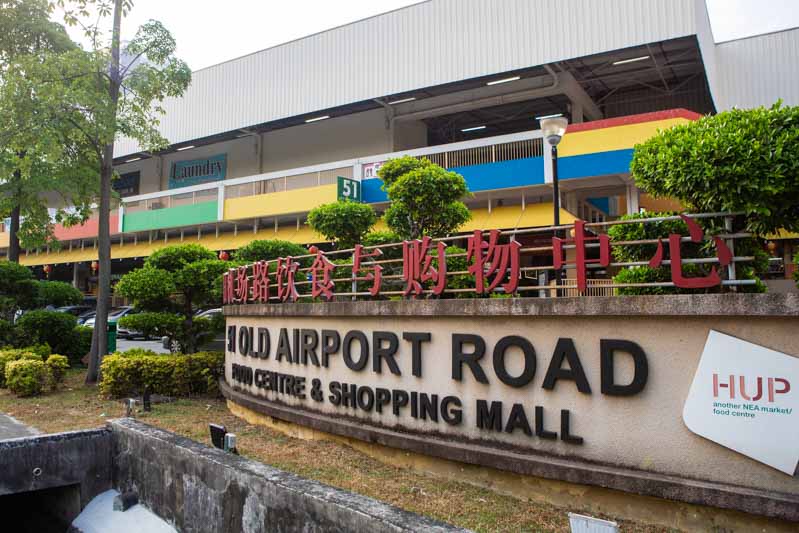 To put in plane-ly, Old Airport Road was where Kallang Airport, Singapore’s first civil airport, was stationed at. After the airport closed its doors, Old Airport Road Food Centre opened there almost two decades later in 1973.

Another unique point about the food centre is that it houses a few well-known prawn noodle stalls. How often do you see more than one stall selling the same item, in the same hawker centre?

And so to save you the trouble of figuring out which one you should patronise, we’ve gone ahead to conduct our own prawn mee showdown between strong contenders: Albert Street Prawn Noodle vs Whitley Road Big Prawn Noodle.

For a consistent comparison, we ordered prawn noodle soup and pork ribs with dry prawn noodles for both stalls. 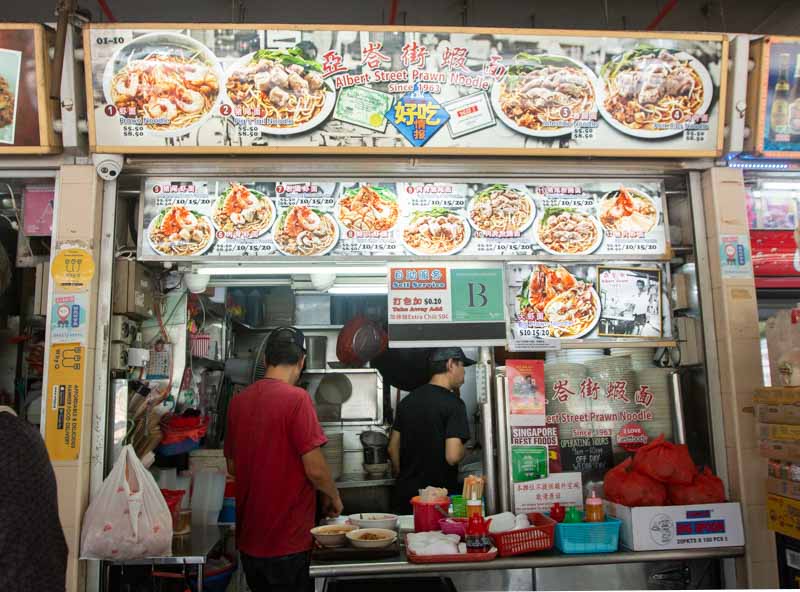 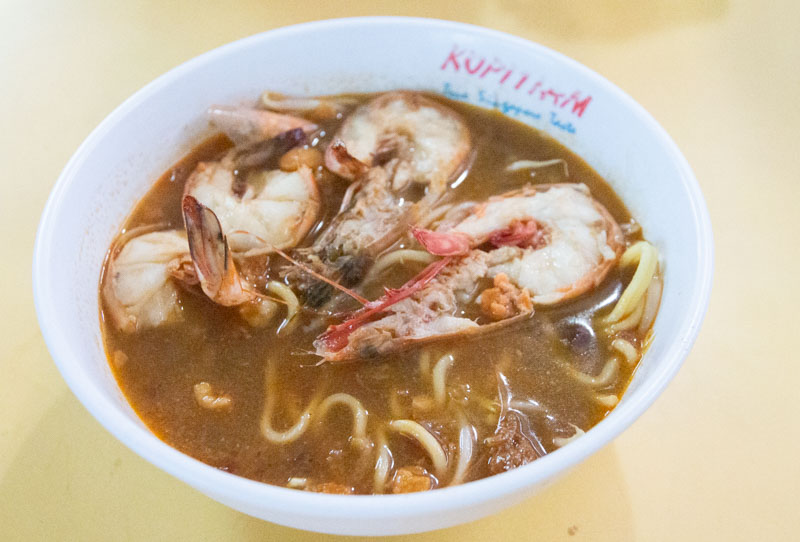 Having travelled all the way from the West to the East for this, I was starving by the time we sat down. Since prawn mee is one of my favourite comfort foods, I was excited to dig in to a bowl of their Prawn Noodle (S$5.50) soup. While the prawns should supposedly be the star of the dish, I usually pay the most attention to the soup. Going in for a spoonful, I found it to have a decently rich seafood flavour from the prawns, without any fishiness. I also thought there was a good amount of chilli, which helped to add a spicy kick to each mouthful.

Even though I usually like my broth a little heavier with a slightly peppery taste, I think a lighter broth would suit everyone’s palates better. 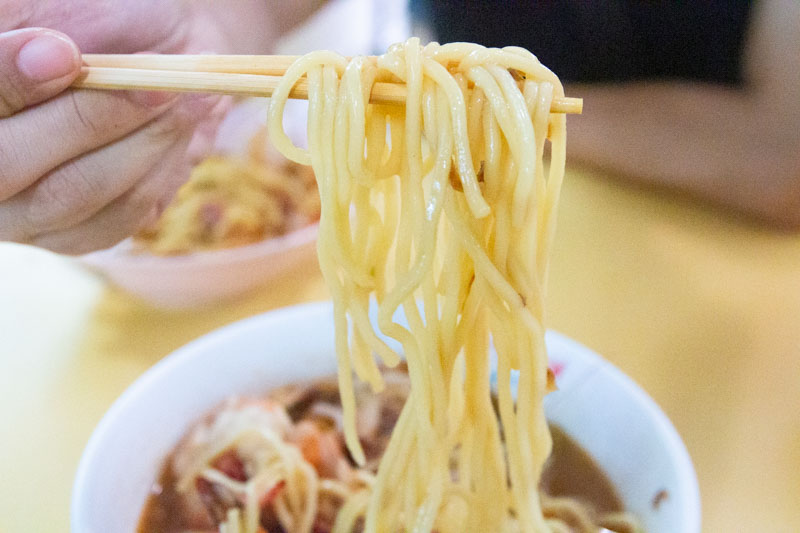 You can expect your standard yellow noodles, and these ones were soft without being soggy. 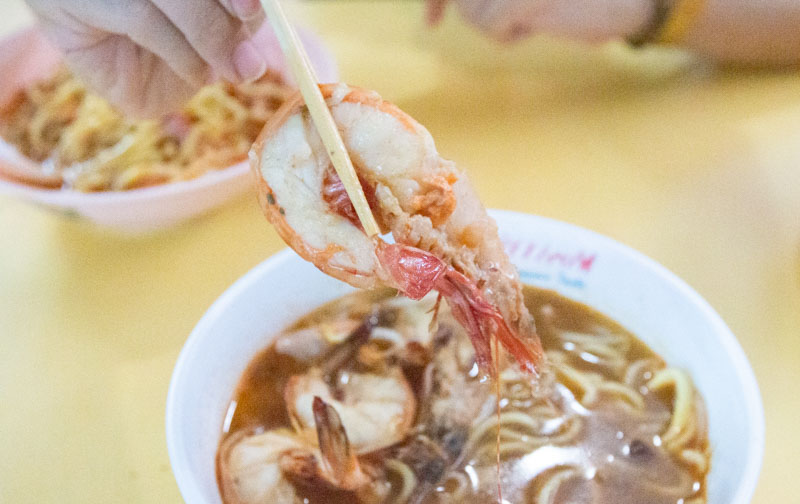 I liked that the prawns were fresh and tender but with a bite to them. We were given three whole prawns which were pretty big, so I think that makes up for the S$5.50 price point.

This might be such a millennial thing to say, but my only gripe was that the prawns weren’t fully de-shelled. But they already did half of the work for me, so it was pretty easy to extract the meat from the shell.

Overall, I slurped up the soup with lip-smacking enjoyment, especially with the relatively large prawns. I wouldn’t mind paying S$5.50 again for a bowl! 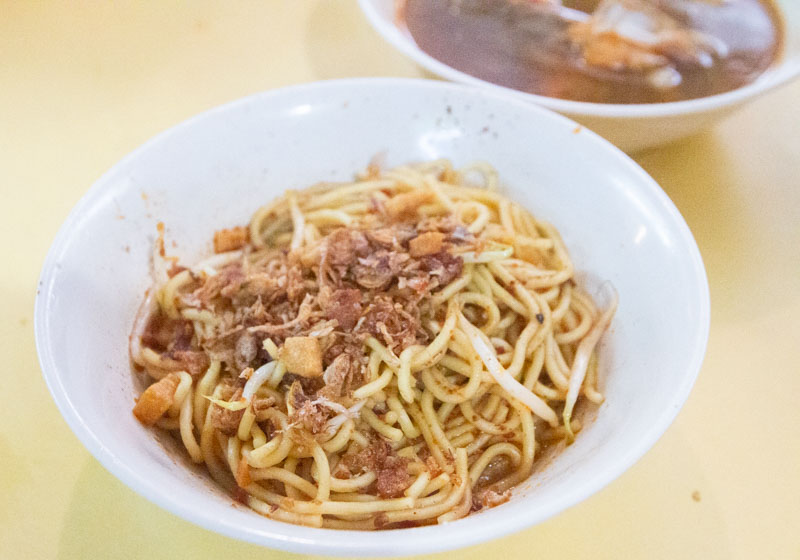 Of course, we had to give the dry version a go. We decided to be a little fancier, and ordered their dry Pork Ribs Prawn Noodle (S$5.50). 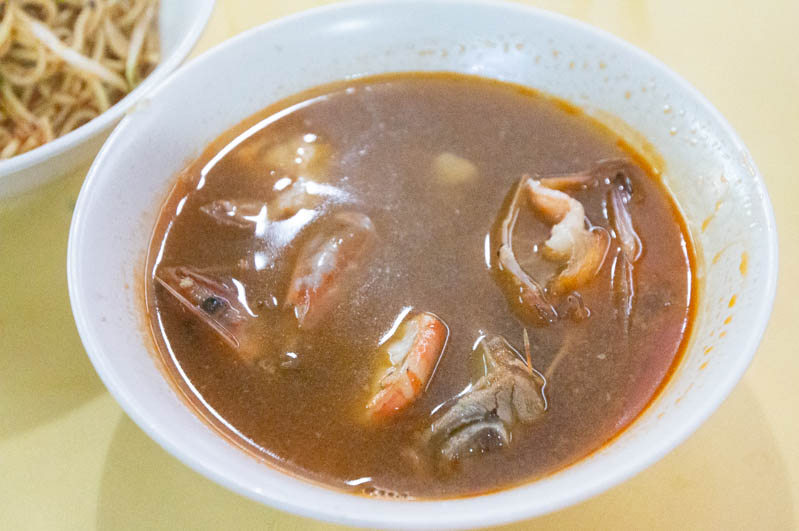 I thought it was interesting how the prawns and pork ribs were placed in the soup, separate from the noodles. Taking a sip of the broth, I noticed that the gaminess of the pork took centre stage, and overpowered any of that briny flavour from the prawns. 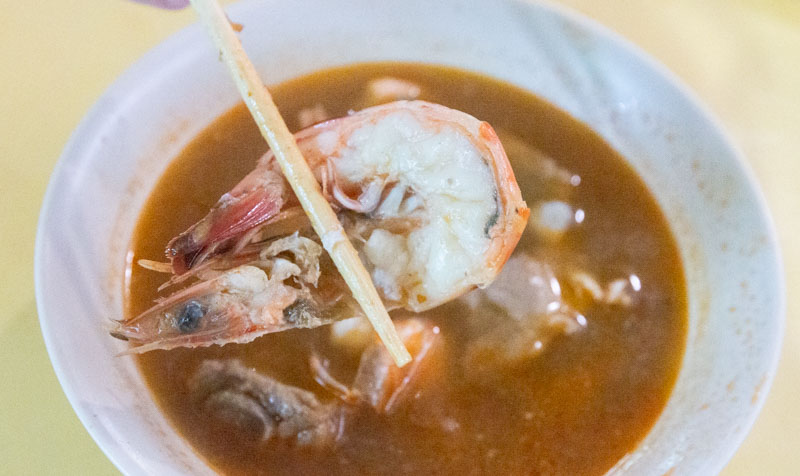 Unlike the soup version, this bowl only comes with two prawns. But since we get pork with the soup too, no complaints here! 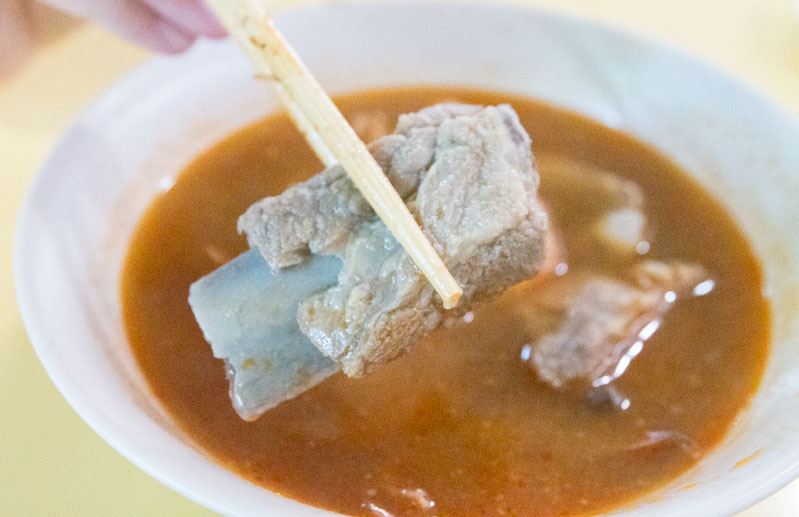 You can expect two decently-sized pork rib pieces, which I found to be on the tougher side. I would have preferred it to be just a bit more tender, and perhaps with more fat for a silky mouthful. 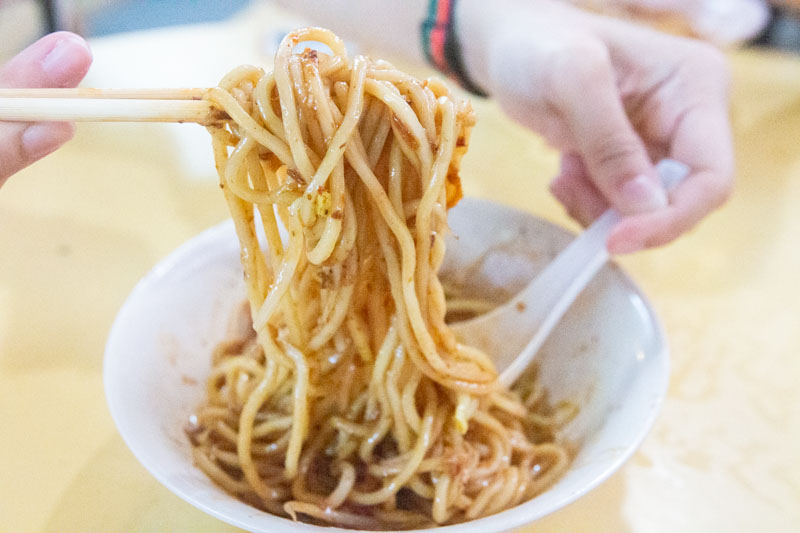 Moving on to the noodles, we gave it a good toss with the chilli. I was just expecting your usual mee with sambal, but a bite reminded me of bak chor mee, which was probably due to the pork lard.

The chilli also wasn’t too overpowering, but it was enough to make my tongue tingle.

I think the addition of pork lard made the noodles much more flavourful, rather than just spicy. And for the good amount of prawns and pork ribs, I think the dish is pretty value-for-money at S$5.50. It was like navigating a maze trying to locate Whitley Road Big Prawn Noodle among the rows of crowded stalls in this huge food centre, but I made it. I was eager to discover how different their soup Big Prawn Noodle (S$4.50) would be from Albert Street’s. Price-wise, they’re cheaper, even though a bowl comes with three big prawns too. 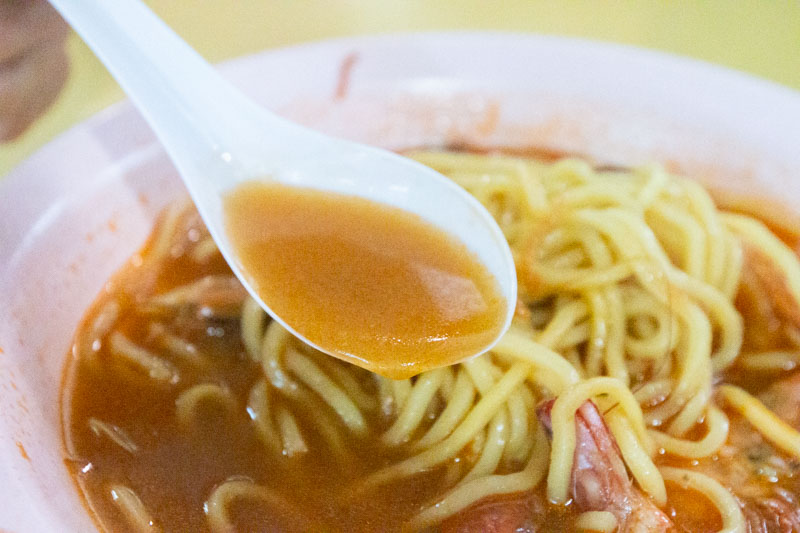 The first thing that caught my eye was the soup, which seemed extra oily and spicy, compared to Albert Street’s which was a deeper, earthy colour.

Taking a sip of the broth, I found it to be a little too greasy for my liking. While the soup still had that savoury factor, I could not taste much of that umami flavour from the prawns. 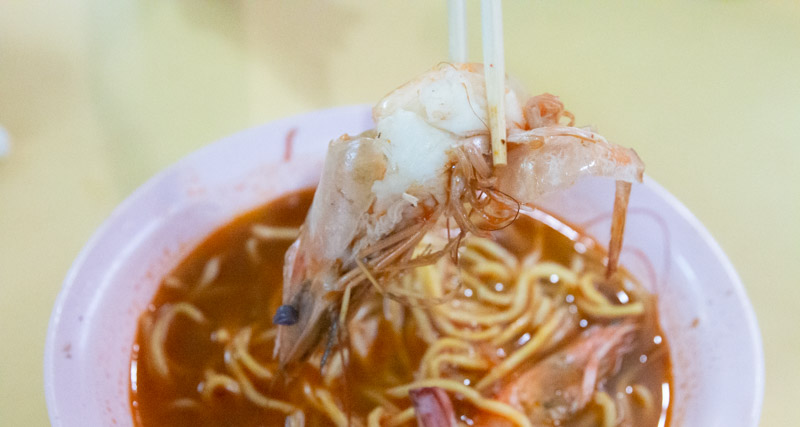 The prawns thankfully did not disappoint. They were large and fresh, without a strong fishy taste. Even though the meat was visibly less firm than Albert Street’s, it wasn’t mushy and still had a decent bite to it. 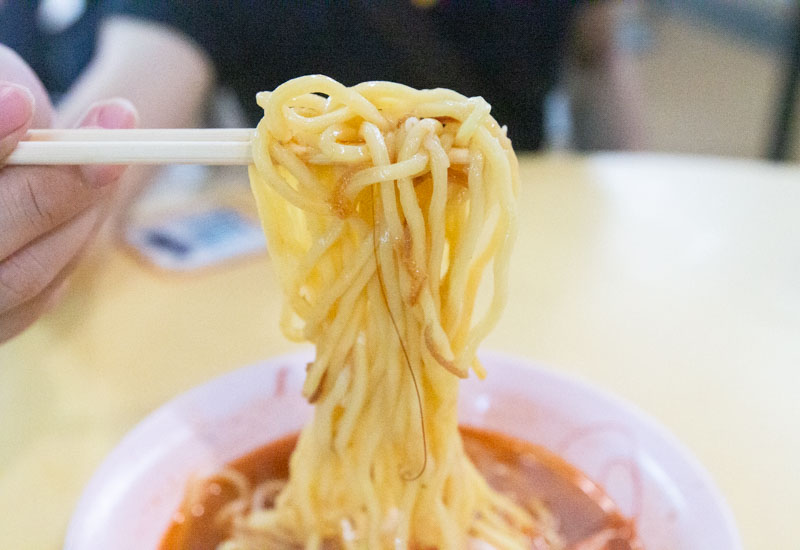 You get the standard yellow noodles, which were soft, similar to the ones from Albert Street.

I probably won’t be going back for seconds, but I’ve come across reviews that are in favour of Whitley Road’s prawn noodle soups, so I guess it is just a matter of personal preference. After a tad too much grease from the soup, I was ready to move on to their dry Big Prawn Pork Rib Noodle (S$5.50).

For a bowl, the prawns and pork ribs come together with the noodles, and you are given an accompanying bowl of their prawn broth. 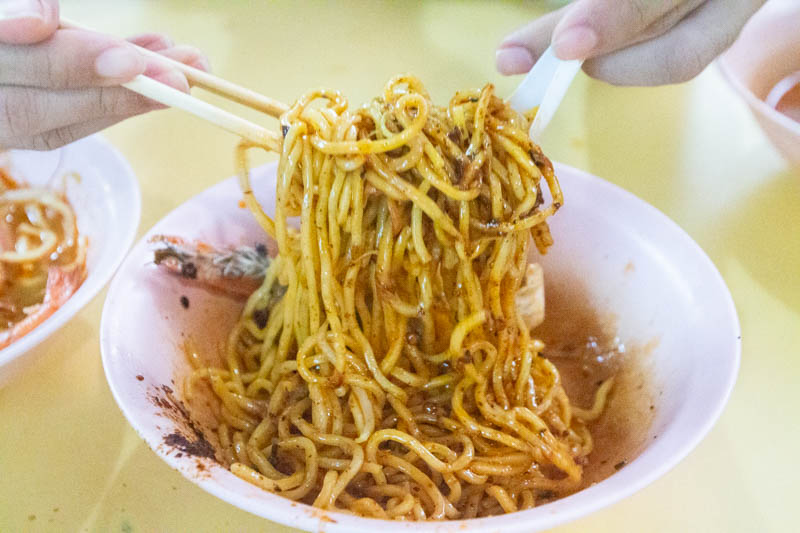 After mixing up the noodles with the sambal, I noticed the mee was quite dry, and could have used some more chilli oil or sauce.

One good thing though, was that the chilli was not too spicy, and did not overpower the starchiness of the noodles. 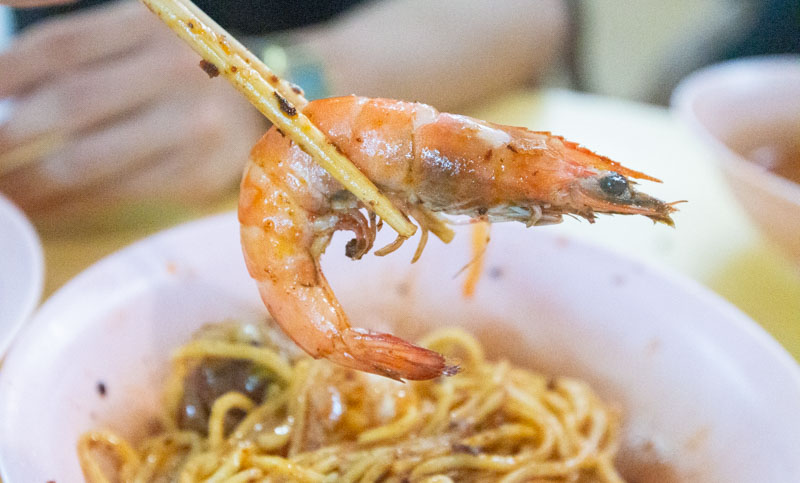 I had no complaints about the prawns, which were fresh and absorbed the sambal nicely for a nutty, spicy taste. Compared to Albert Street’s, these pork ribs were slightly more tender, and I was able to bite it off the bone quite easily.

While I enjoyed the pork ribs and prawns, I think the noodles and soup play a huge role in a good bowl of prawn noodles. Sadly, I did not enjoy either much, so I’ll be giving this dish a miss.

Why? Shrimply because their Prawn Noodle soup had an umami taste in the broth, while their prawns were larger than what you’d usually get at other places. Whitley Road Big Prawn Noodle’s version was a tad too oily for me, and was lacking that rich flavour from the prawns.

And while Albert Street’s pork ribs were not as tender as Whitley Road’s, their flavourful, well-coated noodles and broth made up for it.

Are you a fan of either stall? Let us know which one is your go-to for a good, comforting bowl of prawn noodles!