What’s the difference between cooking cream and heavy cream? I spent a lot of time pondering over such questions, even more so during this ‘Circuit Breaker’ period. An indispensable addition to many recipes, I often find myself staring at the daunting number of quarts of different cream varieties at the supermarket. What is what? Which one should I use for which recipe? As a rule of thumb, always look at the milk fat content indicated on the carton. The higher the fat content, the thicker the cream, and the easier it is to whip into stiff peaks. The final product also tastes richer and is more resistant to curdling, so they are a better choice in soups and sauces. Coming at the top of the charts is heavy cream. Regarded as a superior product, its fat content ranges from 38% to over 40%. Heavy cream whips better and hold its shape longer than whipping cream. This cream is versatile and can be added into soups and sauces, without having to worry about the sauce splitting. It can be even churned into products such as ice cream.

Heavy cream whips better and hold its shape longer than light cream. Light cream still whips well, but it has a lighter and more pillowy texture. Regardless of what type of cream you use, keeping your cream cold and beating it a well-chilled mixing bowl beforehand would ensure a faster and better end product.

In Singapore, you’ll rarely find products labelled as ‘heavy cream’ and it is generally hard to find a cream that has 36% – 40% milk fat in Singapore. In fact, the ones at our supermarkets are labelled as ‘thickened cream’.

More than often, when a recipe calls for heavy cream, we would use thickened cream or whipping cream with a minimum fat content of 35%.

From pastries to making your favourite pasta and sauces, the reasons for using them in your cooking regimen are vast and varied. Heavy cream’s higher fat count makes it an impeccable thickening agent for creamy sauces, soups and desserts. 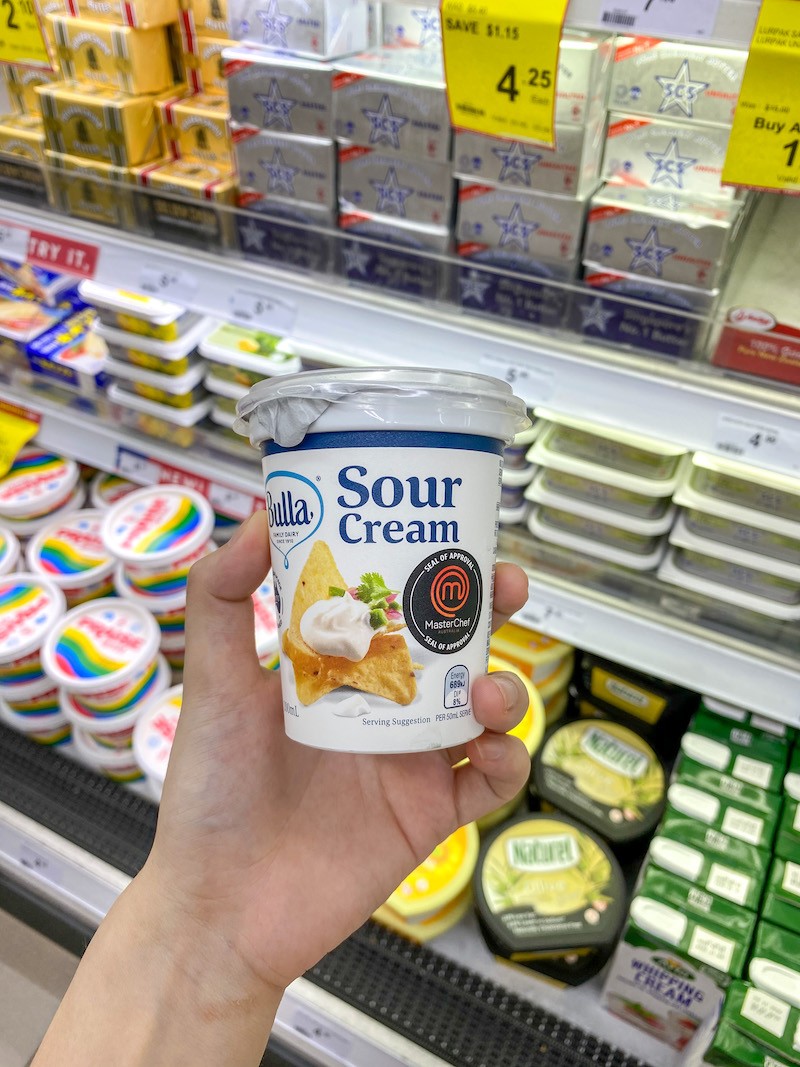 Best known and used for garnish on baked potatoes and as a topping for burritos and nachos, sour cream is a divisive condiment that you either hate or love. Possessing a high-fat content and a creamy texture, it is an easy way to add richness and acidity to your savoury and sweet dish. They possess a tangy and tart taste backed by the rich, thick creaminess.

Sour cream is made by fermenting regular cream with lactic acid-producing bacteria, resulting in a slightly tart and thick substance. Similar to crème fraîche, both give off a tangy flavour. The primary difference is that crème fraîche contains more fat than sour cream, therefore making it more suitable for high-heat cooking.

In addition, sour cream tends to be tarter whilst the crème fraîche can be either very thick or somewhat runny.

They can be used right out of the container and used as an ingredient without cooking. It is popular as a garnish, condiment, raw dip or frosting ingredient.

They are also extremely sensitive to heat so they curdle up easily and they are often added towards the end of cooking time. They can also be used in pastries to add moisture and creaminess to the batter, making your baked goods moister than if you used milk.

One of the more versatile types of fresh cream, double cream is known for its rich and decadent flavours. It has a fat content of 48% and is superb for whipping and can also withstand boiling and freezing.

It can be frozen for up to two months, but when thawed, it can more than likely be used only for cooking rather than as a topping.

It is often added to savoury food dishes such as cream soups or risotto to deepen the richness of the flavours. However, excessive whipping would turn it into butter or create a mixture that separates.

Rich in flavour and thick in consistency, it can be used for a variety of sweet dessert and whipped or incorporated into dishes. It can be spooned or piped onto desserts and cakes.

Cooking cream is also known as culinary cream is used as a stabiliser to withstand high cooking temperatures without curdling or breaking. It is also known as light cream as it contains less butterfat with a lighter and more liquid texture than heavy cream. It is the ideal cream to use when you need to simmer or bring a dish to a boil.

Ubiquitously seen on the shelves of our supermarkets, Emborg cooking cream contains 20% fat content. It is used to add texture to the meal whilst ensuring it keeps its creamy texture.

Heavy cream, on the other hand, is a bit more unctuous and requires less time to cook down to thicken and enrich a sauce. The final difference is that heavy cream has 5 more calories per tablespoon than whipping cream.

Possessing a low-fat content, it does not thicken when beaten. Used in both sweet and savoury dishes, it melts to a velvety pouring consistency when heated or added to hot foods. It is often incorporated into sauces, soups, dips and appetizers.

Crème fraîche is essentially cultured double cream with has been thickened and acidified by the growth of bacterial cultures. With more complex flavours than fresh cream, crème fraîche is a thick, rich, custard of a cream. It is considered as one of the most versatile creams in the market, with it being able to be heated, dolloped or baked.

Crème fraîche possesses a delightful piquant edge, which rich, mildly tangy flavours and a smooth, velvety texture. As compared to sour cream, it is less tart and thickens without curdling, making it perfect for sweet and savoury dishes.

Crème fraîche can be used as a substitute for yoghurt, sour cream or even mayonnaise. A common and popular ingredient in many French recipes, it is splendid over seafood and poultry or even as a condiment.
Price: From S$5.75

Light cream is also known as single cream and it contains about 20% butterfat. It is richer than half-and-half but it still doesn’t contain enough fat to be whipped. It is a perfect coffee add-in if you want even more creaminess in your coffee.

Light cream could potentially curdle when heated in soups or sauces, hence if you’re working to incorporate them into a sauce or soup, add it at the end.

It contains insufficient butterfat to be whipped but it can handle a slight reduction. It adds a subtle richness to soups and stews and is also great served over fresh fruits and berries or atop a cake.

If you’ve ever had the chance to enjoy afternoon tea, you’ll be familiar with clotted cream. Piled high on scones along with jam, it is so decadent that it’s practically dessert. A staple on British tea-time tables and an essential companion to British scones, it possesses a thick and creamy texture with the consistency of softened cream cheese. With at least 55% butterfat, it has a similar texture to crème fraîche, but slightly sweeter.

Often confused with double cream, clotted cream is made by indirectly heating full-cream cow’s milk and leaving it in shallow pans to cool off slowly. After a long period of time, the cream content rises to the surface and is skimmed off.

Double cream, on the other hand, is the liquid base of clotted cream before it has been cooked and is used to make whipped cream.

Its luxurious texture makes it a perfect complement for freshly baked scones. They are often used in sweeter applications and such as desserts, ice cream, fudge and chocolate truffles.

Just like its name, half-and-half is simply an equal-parts combination of milk and cream. Half whole milk and half heavy cream, it has an average fat content of 12% though it can vary between 10% and 18%. It is richer than light cream and therefore it is a popular addition to coffee as it lends a little more richness to the cup than whole milk does.

Due to its lower fat content, it cannot be used to make whipped cream; however, if a recipe calls for half-and-half, light or whipping cream can be substituted in some recipes. Half-and-half is commonly used as a coffee creamer as it adds just the right body and richness.

Half-and-half is best used when you want something richer than milk but not quite as heavy as cream. It can be used in cocktails, ice cream bases, or quiche. While it can be used to enrich sauces, be careful to add just a splash of it at the end as overcooking would cause the sauce to curdle.

Making it a good solution for desserts such as panna cotta, the half-and-half helps deliver a smoother and more consistent result.

Now that we’re at the end of this dairy journey and you have the breakdown of each cream and their uses, it’s time to put on our aprons and get cooking!