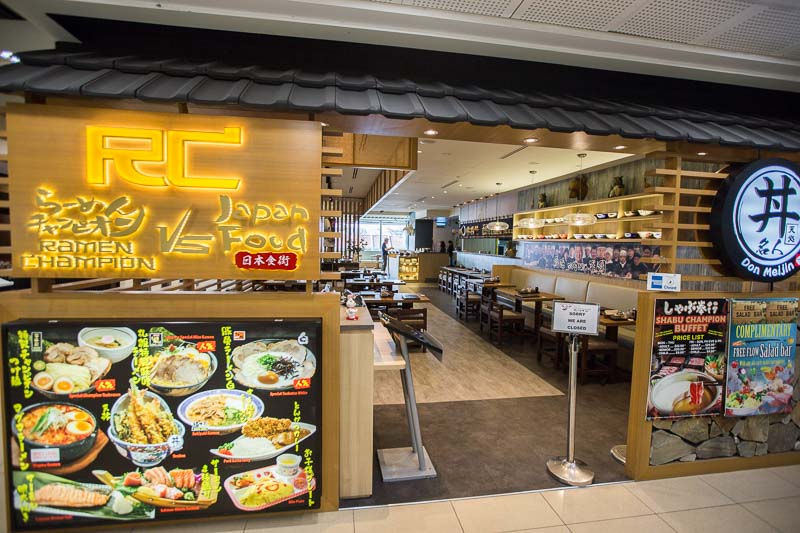 If you think ramen was enough, then the shabu ramen from Ramen Champion will blow your mind! Yes, you’ll get both ramen AND shabu-shabu together.

Shabu Champion is currently only sold exclusively at the outlet in Clarke Quay Central. 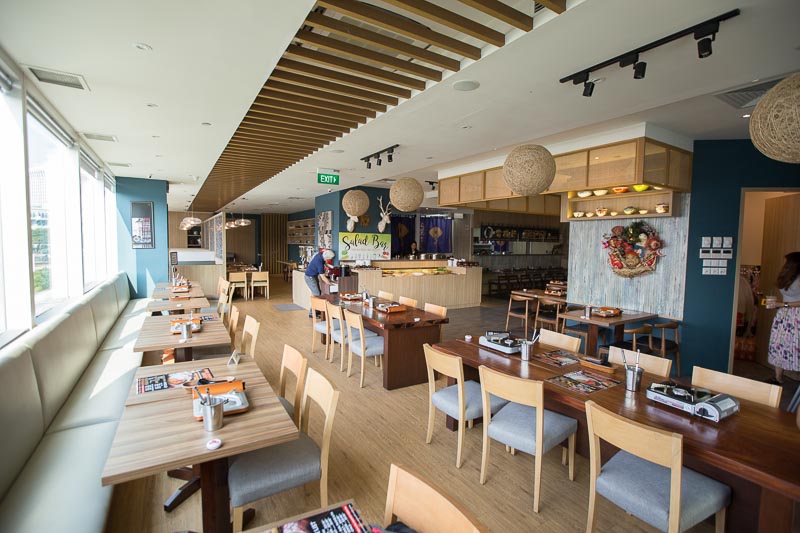 The spacious restaurant is split into two sections: ramen dining area and shabu area. What I really liked about the restaurant is that it overlooks the scenic backdrop of the Singapore River. 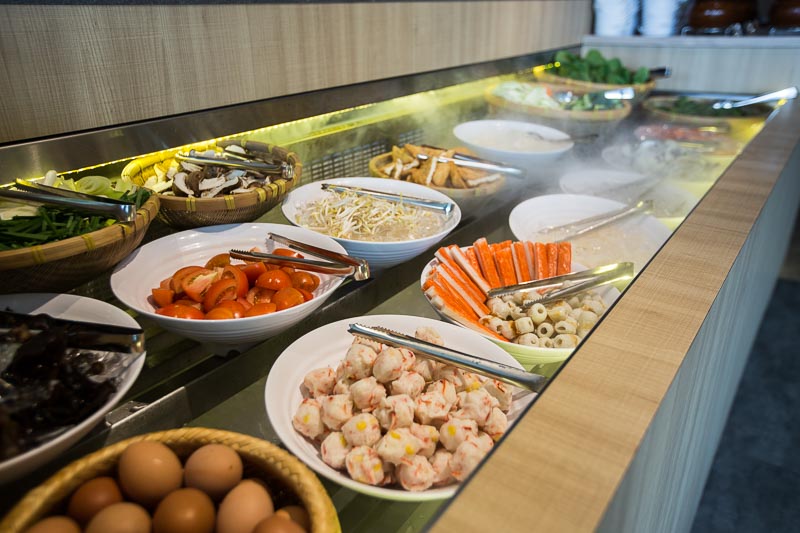 At the shabu station, aside from the standard shabu choices, there were also cuttlefish rings, seasonal flower crabs, clams and prawns. I also noticed that the cuttlefish rings were cut into rather thick slices.

But what was really impressive was the condiments station, which served a range of sauces unique to Ramen Champion, such as Gomodare, Spicy Tomato and Buta God Spicy Sauce. 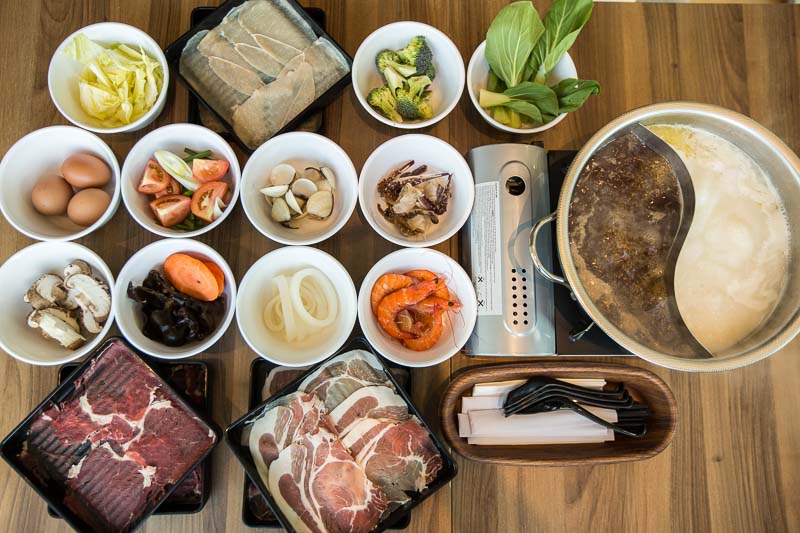 With the hot pot bubbling and the last ingredient finally on the table, we started our meal! First, we tasted the Hakata Tonkotsu broth on its own. Unlike how Tonkotsu broths were often rich with umami pork flavour, this had a pronounced gingery taste.

I liked that the broth was rather thin and light, because the lightness made it a good base for more ingredients later on. 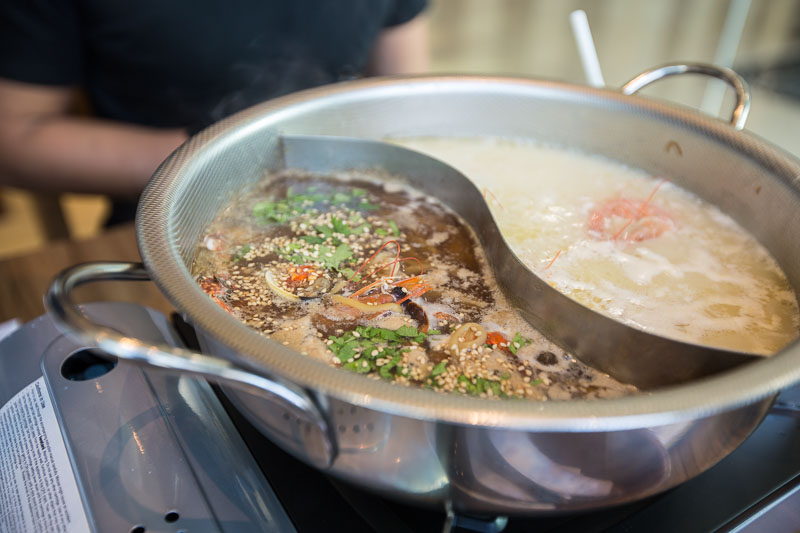 The initial taste of the Tokyo Shoyu was just like any other shabu–shabu shoyu broth. However, that all changed when a chef came over and offered to spice things up with a unique mix of condiments consisting of coriander, sesame seeds and chilli padi.

And boy, was that a game changer! The spice was a little too potent for me, but it tremendously accentuated the taste of the broth and the ingredients. The mix is pretty simple to make and I highly recommend you add this to the broth — just moderate the chilli padi to your liking. 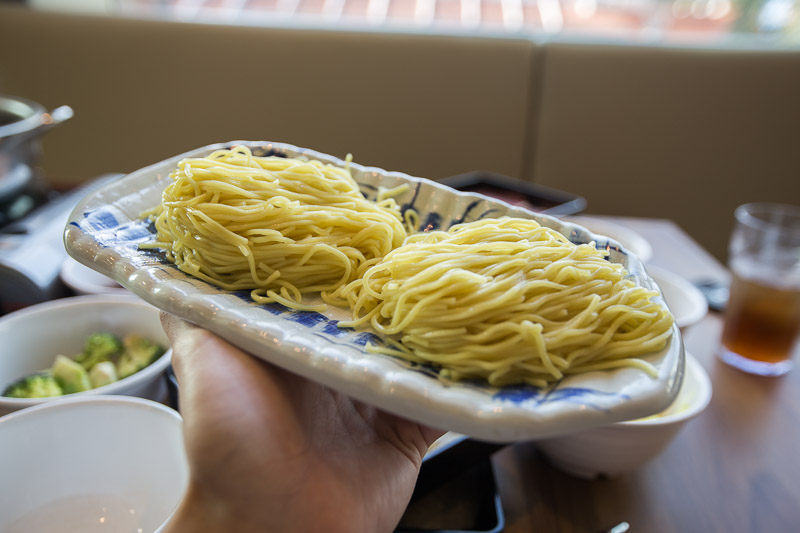 We then ordered two servings of ramen! I appreciate how this concept allows for you to control the doneness of the noodles to better suit your personal preference. 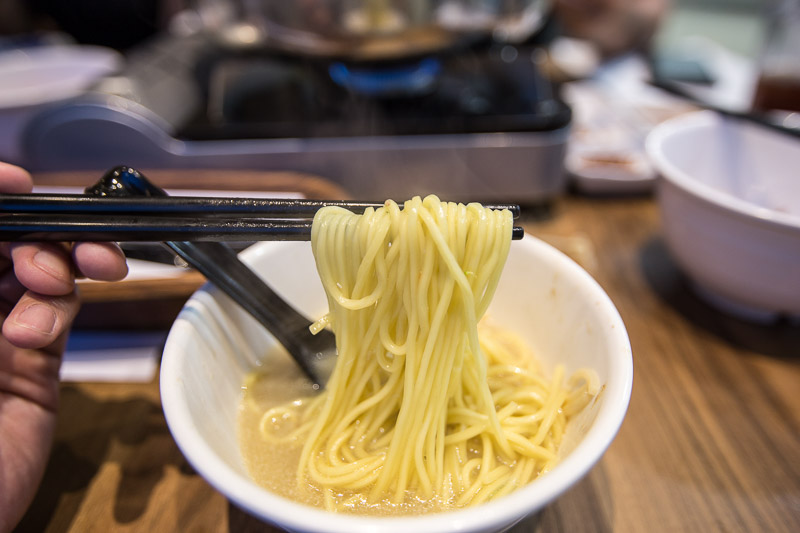 My colleague liked his noodles a little softer, while I prefer them firmer. Regardless of your preference, you’ll be glad that the noodles aren’t the least bit starchy and I found that it paired really well with the broth. 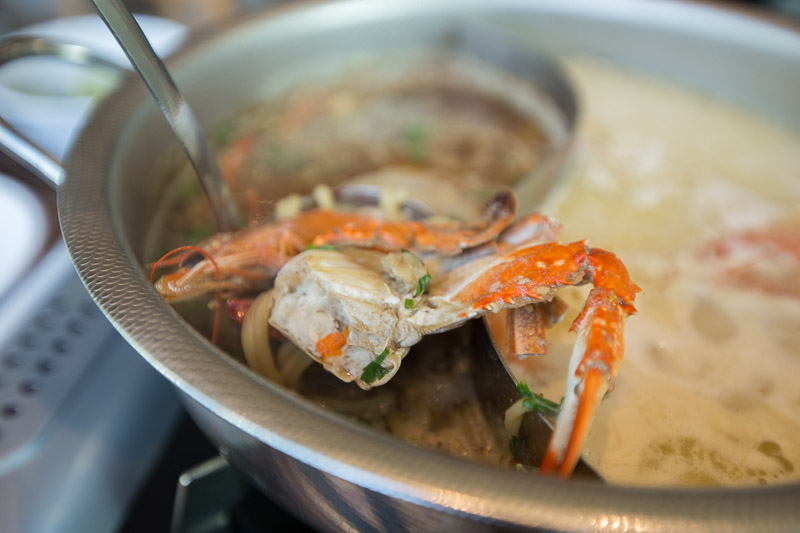 We were impatient to get started, so we dumped everything into the broth. The first thing I fished out was the Flower Crab, and the fresh crab meat was soft enough to be sucked right out. Biting into it filled my mouth with a little briny flavour, just the way I like it. 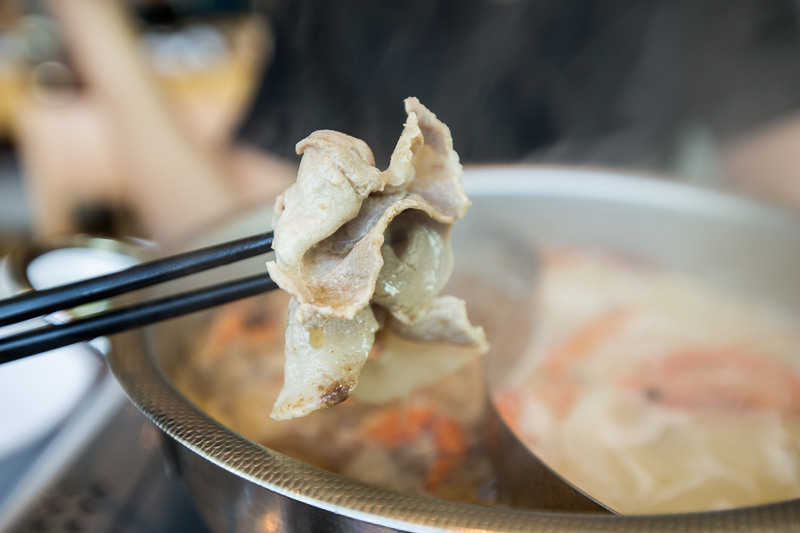 Look at this steaming slice of Brazillian Pork Belly! I swished it around in the pot for a couple of seconds, and it soaked up the flavours of the broth quickly. Tender and tantalisingly fatty, this is a definitely a good slice of meat. 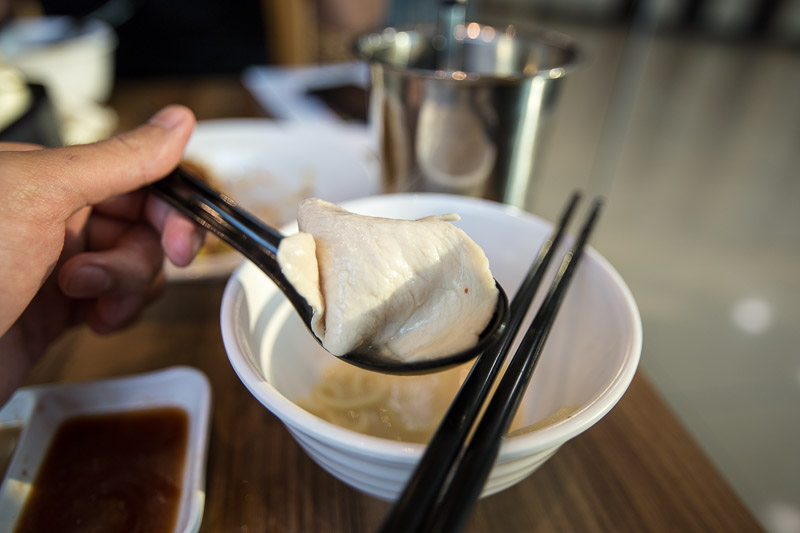 My favourite so far was the Chicken Leg slices. They were silky-smooth, tender and really tasty. The Chicken Leg was great on its own but I highly recommend letting it boil in the Tokyo Shoyu for a little longer so that it soaks up the broth and becomes infused with flavour. 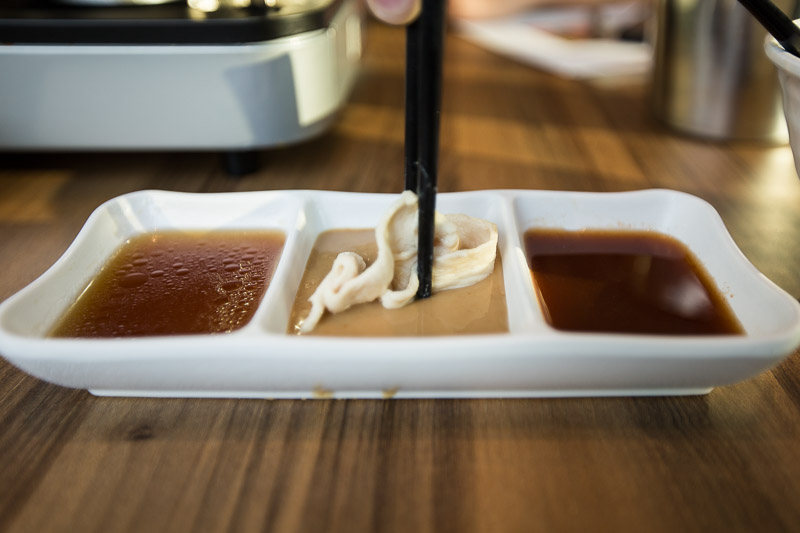 Dipping it in the Gomadare would also be an excellent choice. The sauce tasted a little like roasted sesame oil, but was slightly creamy, which went rather well with the chicken meat. 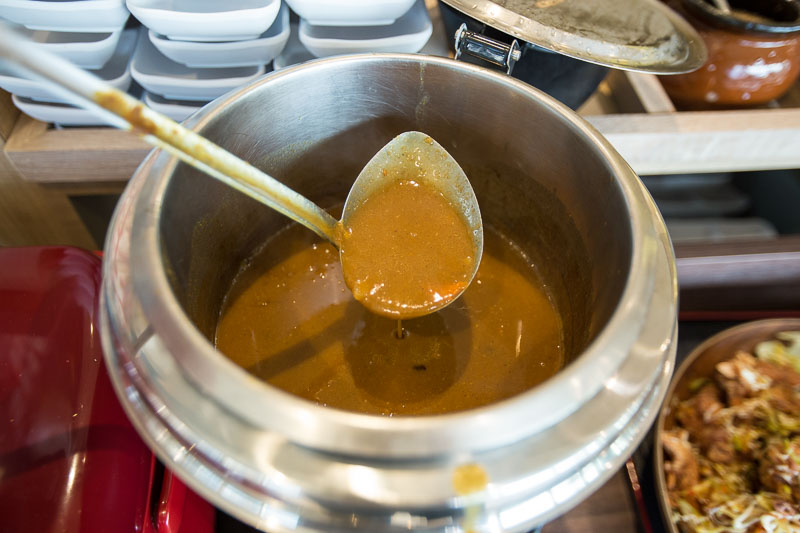 The restaurant also had a Japanese Curry stand! Served in a large pot with a rice cooker full of delicious carbs on the side, it’s a pity I only noticed it halfway through the meal. 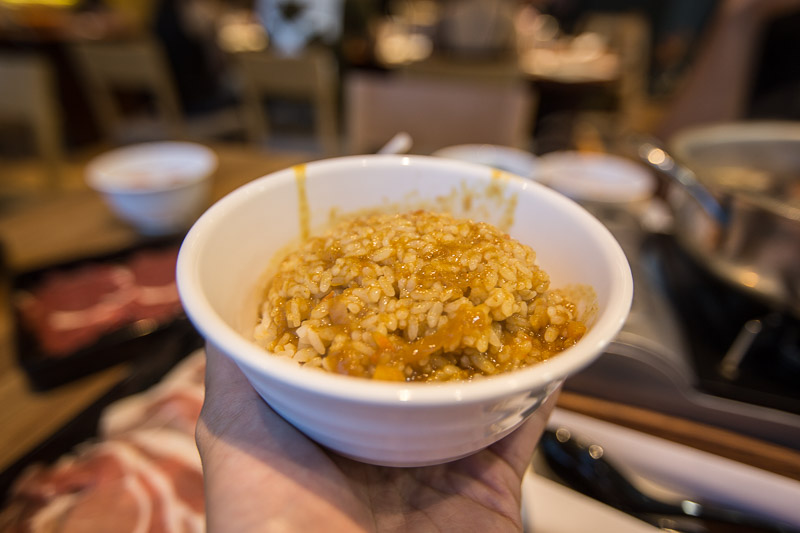 The curry wasn’t that thick, but I liked that it had a mellow sweetness and bits of mashed potatoes, onions and tomatoes. If you find the curry rice to be a little plain, you can enjoy it with the ingredients from the shabu-shabu.

If I weren’t completely stuffed from the shabu-shabu, I’d have chowed down on one or two more bowls of this delectable curry.

Introducing ramen broths to shabu-shabu is novel and a rather splendid idea. Unfortunately, we’ve only got to try two of their signature broths but I’m sure the other flavours will be just as good.

At such a prime location, the prices are really reasonable. Although you do not get an extensive variety but trust me, it’s more than enough. And when the meat tastes so darn good, you simply have to try it!

So if you’re ever in the area, give Shabu Champion a shot because it’s definitely a meal fit for champions.