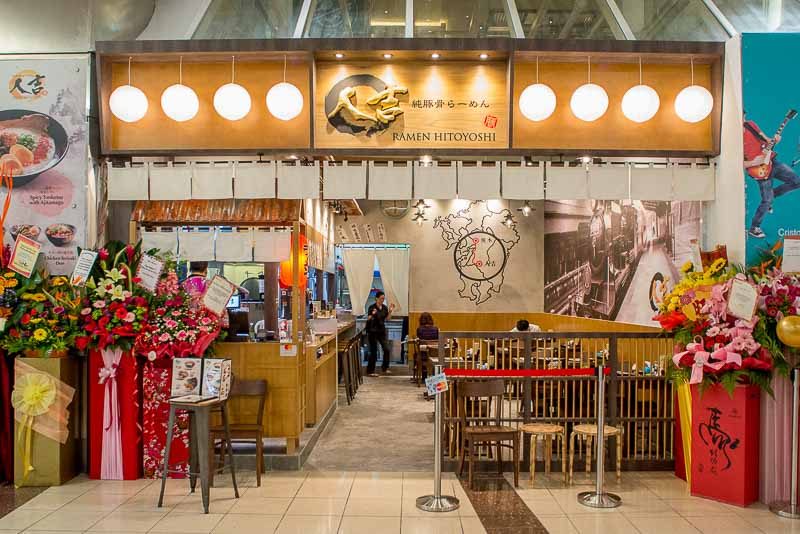 I love having ramen with tonkotsu (pork bone broth). In fact, it’s probably the most popular soup base in Singapore over other types such as miso (fermented soybean), shoyu (soy sauce) and shio (salt).

Adding to the bevvy of tonkotsu-broth ramen joints in Singapore is Ramen Hitoyoshi. Located at Harbourfront Centre, it’s a new addition to the area’s many dining establishments. 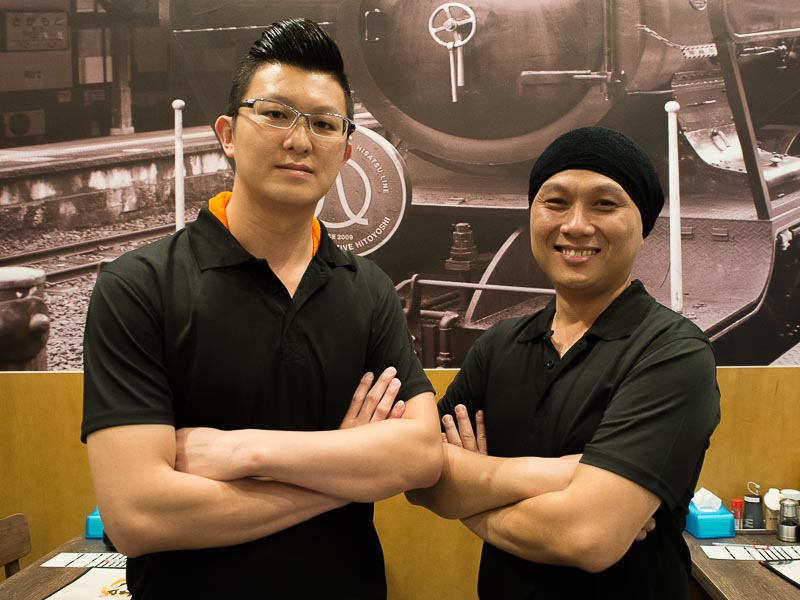 A partnership between two local chefs — Ray (left) and Tan (right) — who’ve had working experience in a variety of establishments, including the super-popular Keisuke franchise, they are now striking it out with their very own ramen joint at Ramen Hitoyoshi. The 28-seater restaurant boasts a warm and brightly-lit interior that follows the traditional Japanese style of decor with the prominent usage of wood furnishings and neutral colours. For those taking the counter seats, you’ll be glad to know that there are power points and even USB ports below against the wall so you can charge your devices if you need to. The tonkotsu broth is simmered for over eight hours but surprisingly, isn’t served there and then. Instead, it is served the next day after being chilled overnight in order to heighten its rich and gelatinous quality. 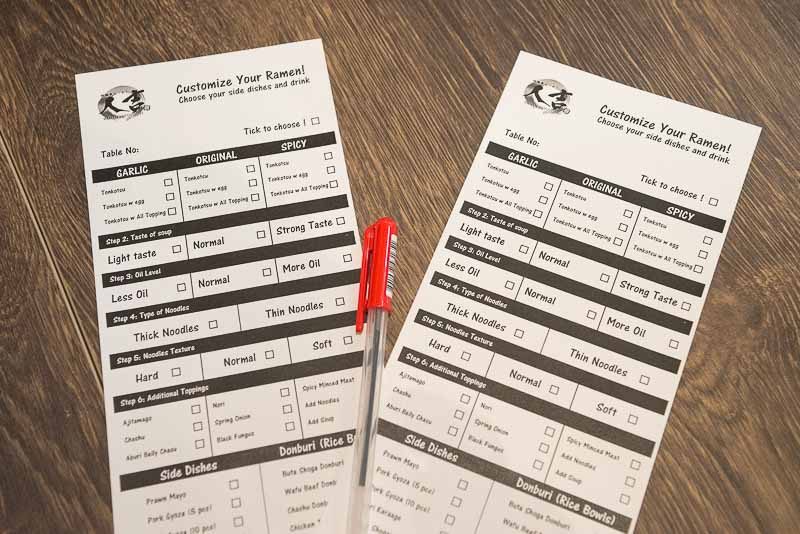 Ramen lovers won’t be strangers to this style of customisable order forms. You can adjust the strength of the broth as well as the texture and thickness of your noodles to get that bowl of ramen that is just perfect for you. 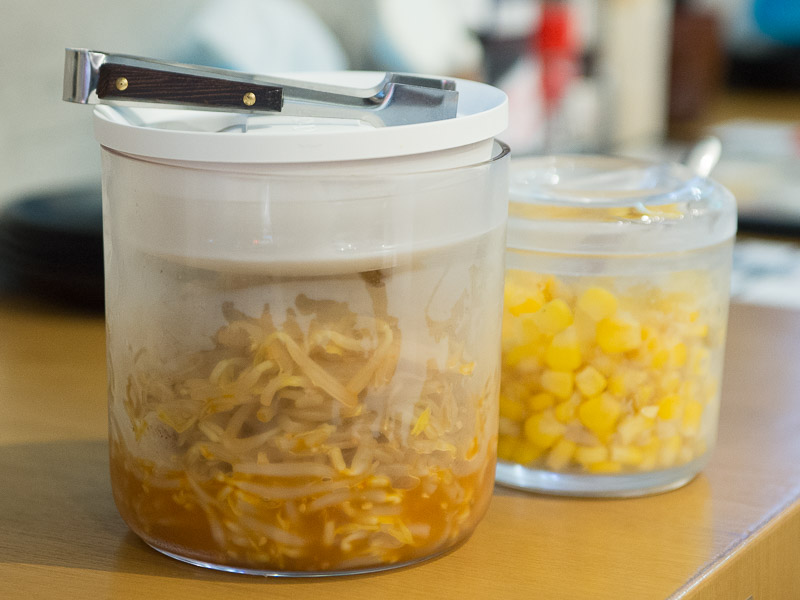 Cool and crunchy with a nice hint of sesame seeds, this made for an enjoyable appetiser. While there are no hard-boiled eggs like Keisuke’s ramen concepts, I thought sweet corn was a great alternative. Crunchy and sweet when eaten on its own, you can also add a spoonful of them into your broth to enhance its flavour. 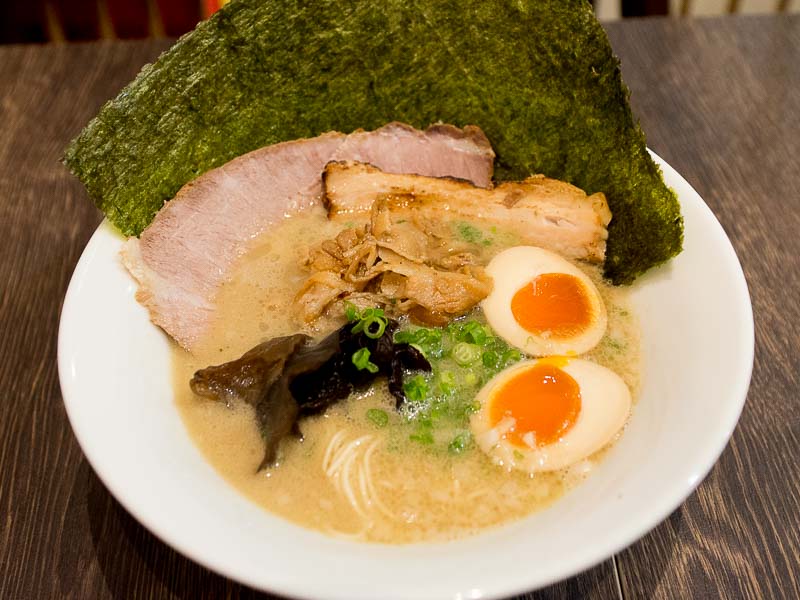 Of course, my first bowl of ramen had to be the Original Tokotsu with All Toppings ($14.90). The broth was rich, creamy and very satisfying.

The black fungus had infused the broth with a pleasantly faint aftertaste of mushrooms as well. Overall, a very good rendition of tonkotsu. The ajitama was spot on as well, with the marinade permeating the whole egg while the yolk had a nice gooey, lava-like consistency. 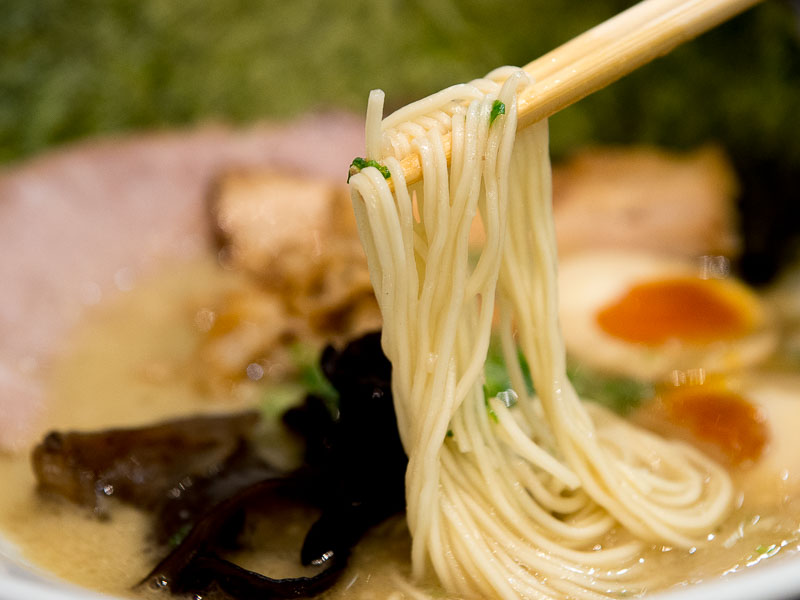 The noodles (I ordered thin noodles with hard texture) had a snappy firm texture which made it very enjoyable to slurp. 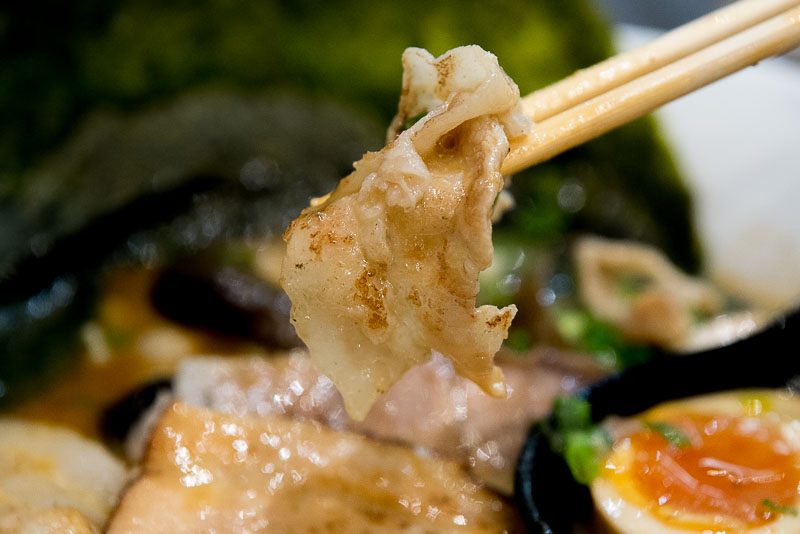 The savoury and slightly sweet slivers of buta shoga were delicious with a fragrant aroma of ginger. The little rings of onion were caramelised quite well too, which made them soft, tender and sweet. 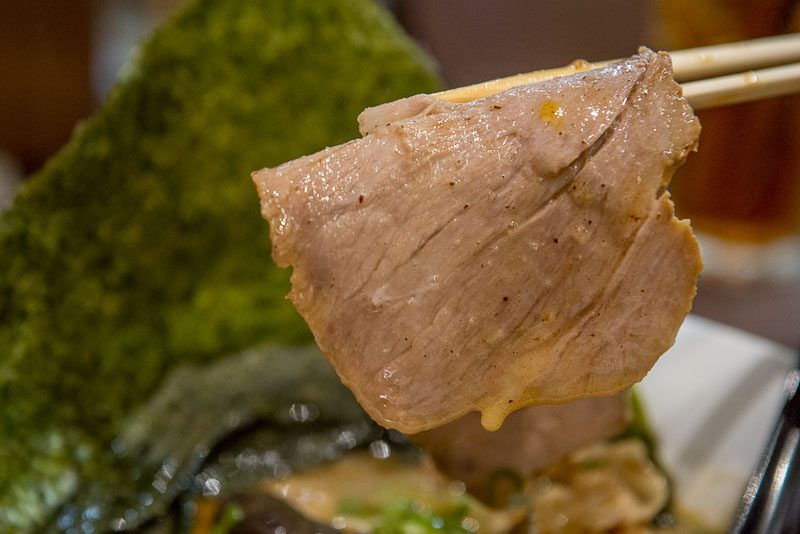 The regular chashu here is quite lean and thus a little tougher than I think what most people would prefer, texture-wise. And then the highlight of the meal at Ramen Hitoyoshi: the aburi belly chashu. Incredibly soft and tender, it literally had that melt-in-your-mouth texture. This, I believe, is the reason for the leaner cut of regular chashu previously — it’s to balance out the rich fattiness of the belly chashu.

Do yourself a favour and make sure you get this. Even if you don’t go for the ‘all toppings’ option, adding on this aburi belly chashu that only costs $1. You won’t be disappointed. 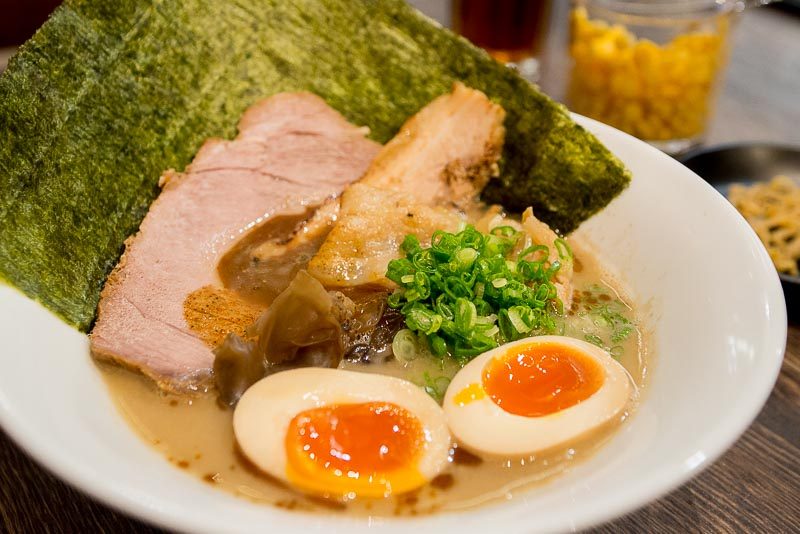 Next up was the Garlic Tonkotsu with All Toppings ($15.90). Using the same tonkotsu broth and toppings, the only difference was a dollop of a garlic oil. But oh, what a difference it made! 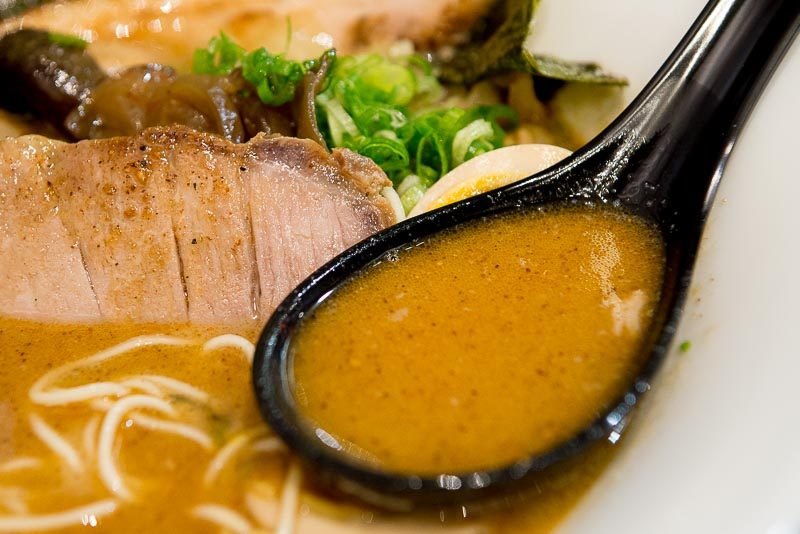 A good stir of the oil into the strong-level broth resulted in an aromatic and fragrant broth with a long-lasting garlicky aftertaste. If you prefer strong pungent flavours like I do, you’re gonna love this. 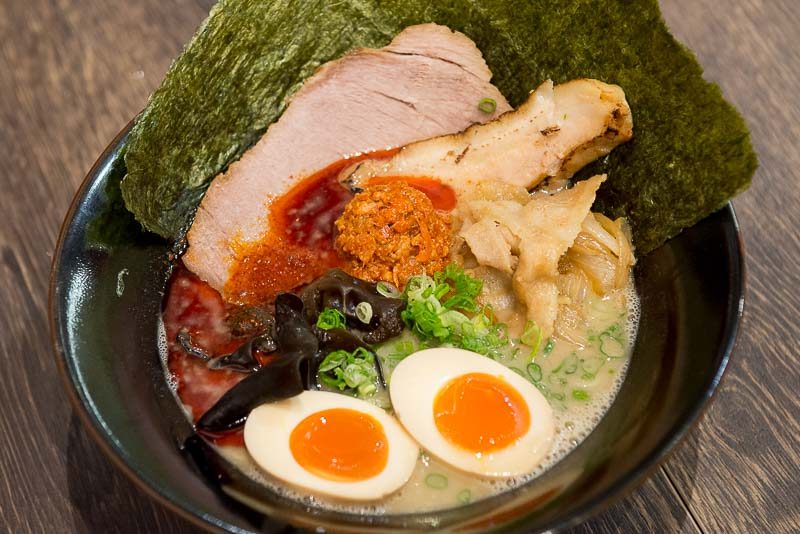 The third and last type of ramen offered here is the Spicy Tonkotsu with All Toppings ($15.90), with the key differences being the addition of chilli oil and a little mound of spicy minced pork. The broth is surprisingly less spicy than it looks while still retaining its potency. Instead of a fire-blast of spiciness that makes you want to chug glass after glass of ice water in futility, it is mellower with a steady build up and persistent heat. 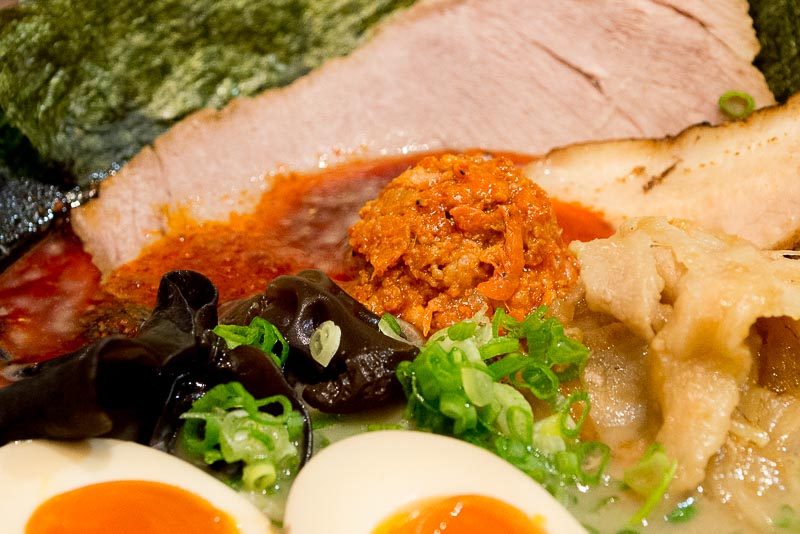 The spicy minced pork with bits of sakura shrimp mixed was a great touch as well. Savour bits of it on its own for a burst of salty-spiciness or mix it into the broth for an, even more, full-bodied broth.

The carnivore in me was super satisfied with this bowl — together with the two types of chasu as well as the buta shoga, there were essentially four different types of meat! 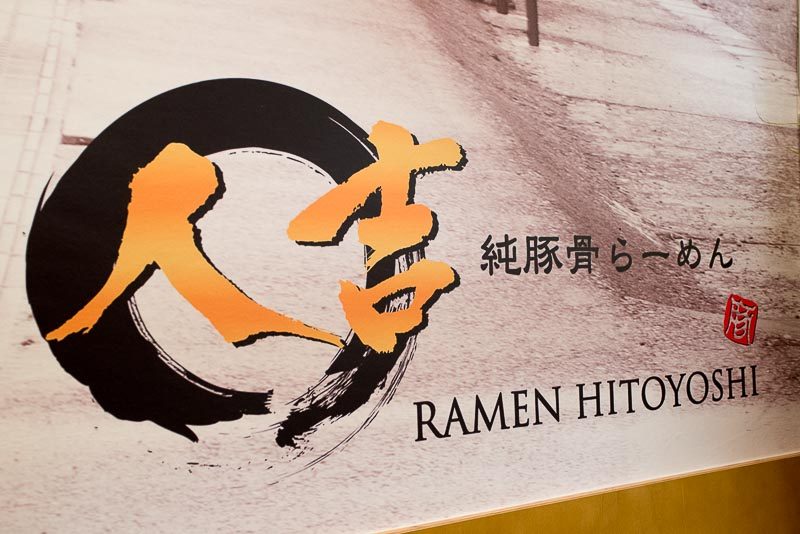 Overall, I thoroughly enjoyed my meal at Ramen Hitoyoshi. There will inevitably be comparisons to the Keisuke franchise but I believe that the ramen here is good enough to stand on its own.

If you find yourself at Harbourfront and craving a bowl of actually good ramen, you don’t have to travel into the CBD to satisfy your craving anymore.