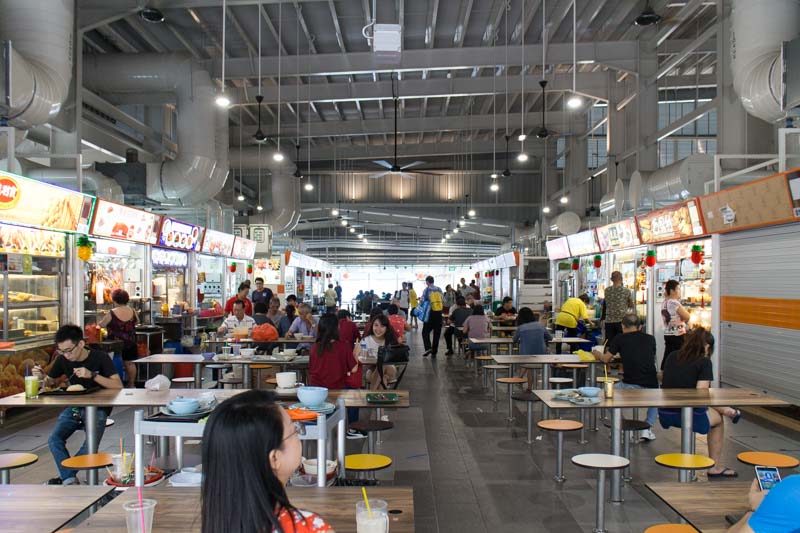 Geylang Bahru Food Centre has finally reopened its doors in early 2018 after a long year of renovation and revamping. With the new Geylang Bahru station operating right across the street, making it highly accessible.

For newbies, the spread at the market may seem a little intimidating. So to help you make the tough decision of which stall to eat from, here’s a list of eight stalls to try out in the market. No market experience is ever complete without ban mian, in my opinion. That’s why we had to place Hui Wei Chilli Ban Mian at the top of my list. They sell handmade ban mian accompanied by various types of soup, and also dry ban mian, which is becoming increasingly popular.

Being the heat seekers we were, we got the Signature Chilli Ban Mian (Regular: $4, Large: $6), which came with al dente noodles, a generous helping of minced meat, and a dollop of chilli on the side. While we were collecting our noodles, the auntie warned us, “小心辣椒很辣” (be careful, because the chilli is really spicy).

We couldn’t really understand why she warned us at first, chilli ban mian is meant to be spicy. But after mixing most of the chilli in and polishing off half the bowl, we understood where she was coming from. The heat from the chilli builds, so the more you eat the spicier it gets.

But the combination of the savoury chilli, chewy noodles, and fragrant soy sauce was so addictive, we just couldn’t stop. 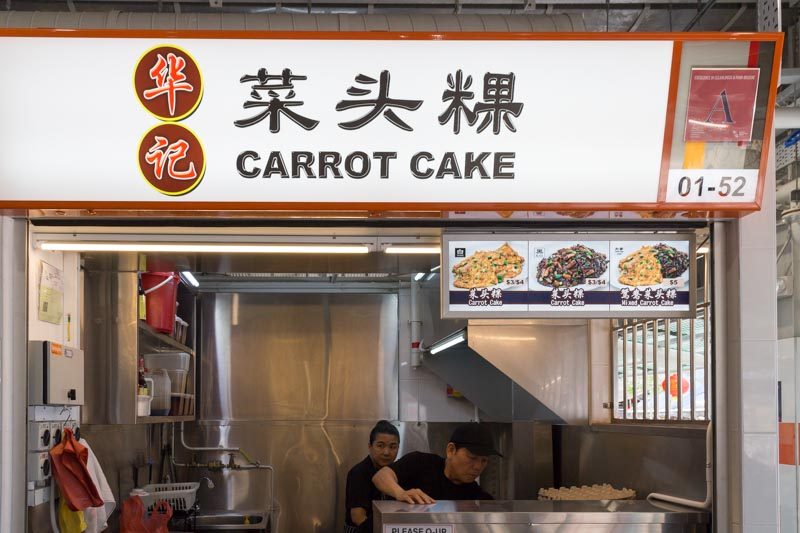 Looking around the market, we saw a number of people carrying plates of piping hot carrot cake from this stall. Out of curiosity, we got ourselves a plate of Black Carrot Cake (Regular: $3, Large: $4) to find out what made so many people patronise Hua Ji Carrot Cake. 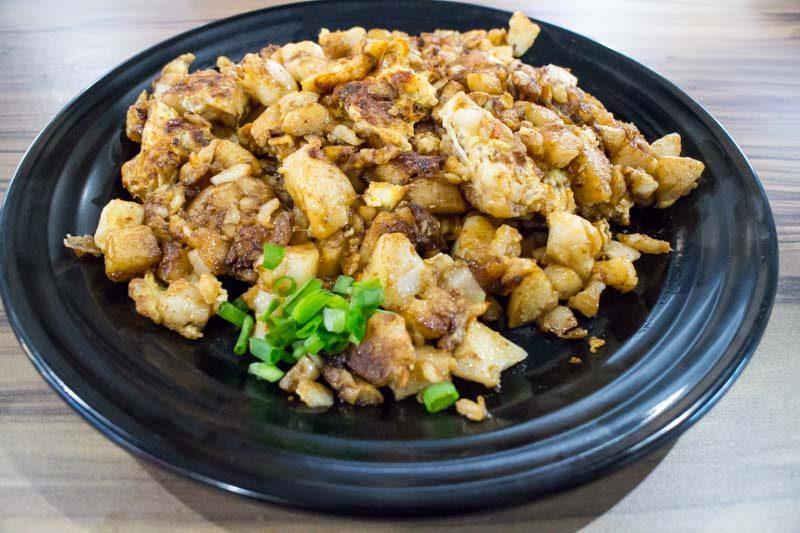 At first glance, the Black Carrot Cake wasn’t as orh (black), boasting only a light brown colour. Despite that, the dish was pretty flavourful, with the slight sweetness of the dark soy sauce and the smoky flavour from the charred egg bits.

However, it was the crispy egg that coated every piece of soft carrot cake that won us over. The contrast between the two made every bite enjoyable.

Hua Ji sells both Black and White versions of their carrot cake, but if you can’t decide which to get, you can get the Mixed Carrot Cake ($5) which will give you the best of both worlds.

Fishball noodles are quintessential to every market in Singapore. Mei Ji Fishball Noodle provides that quality fishball noodle option in this market. The portions served here make their noodles great value for money.

For a $3 bowl of Fishball Mee Pok Dry, you’ll get three fishballs, two fish dumplings, and a fairly generous amount of fishcakes. What’s not to love about that?

The fishballs were light and springy, complementing the perfectly cooked noodles. Although the fish dumplings were more peppery than others, you don’t hear us complaining. Despite the sauce being nothing out of the ordinary, the other components made it a solid bowl of noodles worth queueing for.

You know the food is good when a line forms even before the stall opens. That’s how we knew we were in for a treat as we waited in line at Cheok Kee Boneless Braised Duck’s.

The wait was slightly longer than expected as the customers in front of us ordered an average of three plates of Duck Rice ($3) per person. We didn’t get the hint, so we only got one plate to share. In hindsight, we really should have ordered more.

The rice itself was savoury and fluffy, and the sauce was very flavourful with a slight hint of sweetness. That paired nicely with the tender duck, which really just melted in our mouths. The duck at Cheok Kee’s sells out quickly, so hurry down to get a taste. The name of the stall is somewhat deceiving, as rojak is no longer part of the menu. In its place, the stall owners have decided to sell Nasi Lemak ($2). But that’s not what we went to try.

We got the Chui Kueh which cost us $1.20 for three pieces, which felt like such a steal. When we unwrapped the package, we were slightly disappointed as there wasn’t as much of the chye poh as we would have liked. However, the chye poh taste was so intense, we actually didn’t need that much of it. The salty-sweet chye poh was the perfect accompaniment to the otherwise flavourless, soft chui kueh.

Ours came with a little bit of chilli which though flavourful, didn’t add much to the dish. In fact, we left the chilli almost untouched as we finished the Chui Kueh off. But that’s just us, and maybe you’ll enjoy it more than we did. 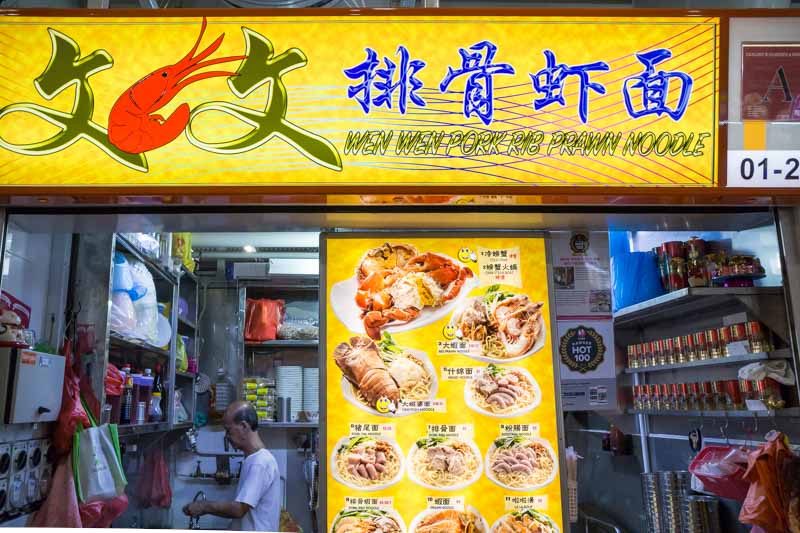 We tried the prawn noodles from a couple of stalls in the market, and came to the consensus that Wen Wen Pork Rib Prawn Noodle served up the better one. 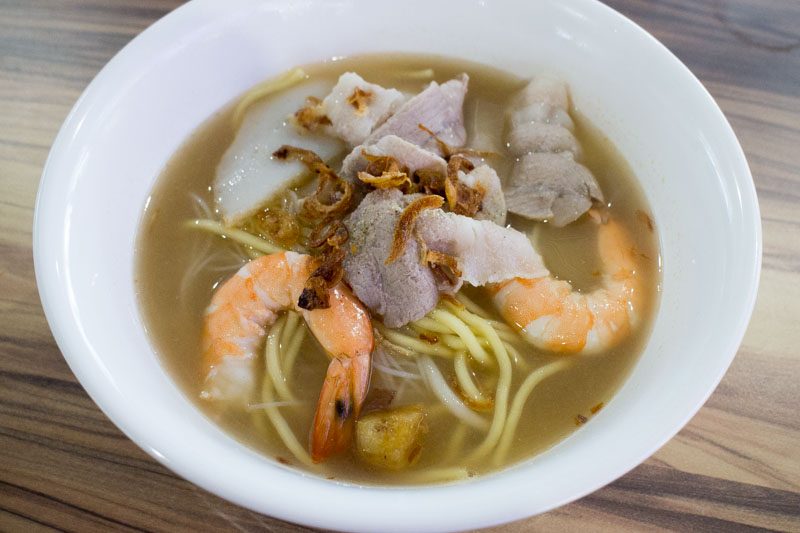 Each bowl comes with two shelled prawns and a few slices of pork belly submerged in prawn based broth. The reason we preferred the noodles from Wen Wen Pork Rib Prawn Noodle was that the broth was richer, and had a stronger prawn flavour.

In addition to the meat and prawns, the bowl of noodles came with some fishcake and cooked bean sprouts. While pork ribs are commonly used in Prawn Noodles, it was interesting to see that pork belly was used in this case. We were also pleased to find that fresh ingredients were used in our noodles.

A lighter meal or snack option would be the Popiah and Kueh Pie Tee sold at Fu Cheng Homemade Springroll & Springroll Skin. At $1.70 per roll, it is pretty affordable.

We ordered a Popiah and were pleased with how full the wrap was filled. It contained the basic turnip mixture, eggs, carrots, and cilantro.

Everything in the wrap was well-seasoned, and the Popiah didn’t leave me disappointed after I was done with it. Our only minor issue was that the sauce may have been a little too sweet. But if you’re not particular, you’ll enjoy this. The best way to end any meal is with dessert. In addition to the conventional dessert stalls, Geylang Bahru Market houses Red Bake, a stall selling various freshly baked goods.

All confectioneries are made in-store including popular items, such as Hokkaido cakes and Castella in addition to the regular types of bread and cakes. 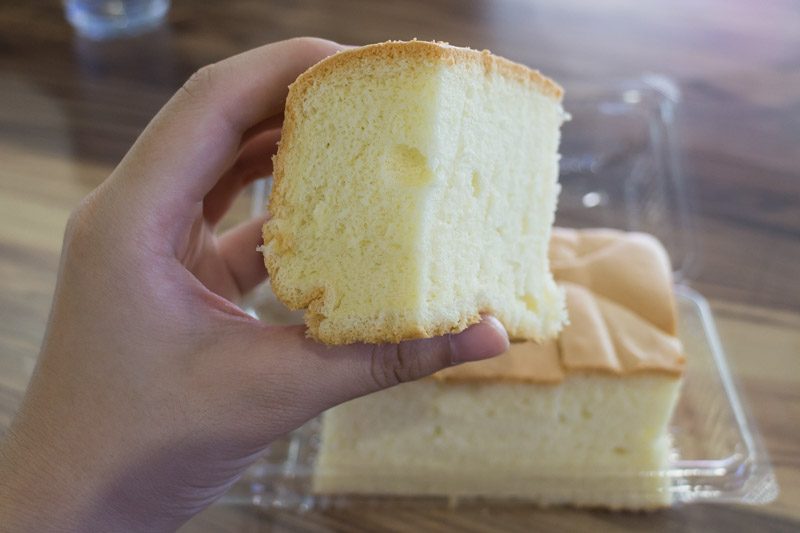 We put the Castella ($4.50) to the test, to see if it was on par with the chain stall equivalents. Each box comes with four pieces of the cake. The taste was somewhat similar, but the same can’t be said about the texture. The one from Red Bake resembled a chiffon cake rather than those popular jiggly cakes.

Having said that, the Red Bake has its own share of regulars, so if you ever crave baked goods or want more dessert options, you can consider stopping by at Red Bakes.