This is apparently -the- Indie French place to visit, from all the “you’ve probably never heard of it” talk my friends tell me. Many Anglo Chinese students as well as affluent school kids in the area have visited La Petite Cuisine, sort of as a rite of passage for snotty brats.

With the new circle line, this place is actually pretty accessible now compared to 5 years ago. Drop off at Botanic Gardens and take a 5 minute walk to this hidden French gem. From the outside, you will see that La Petite Cuisine has pretty much zero ambience, comparable to having a meal at a coffee shop. Upon stepping in, you confirm your earlier observations. The kitchen is just a little shop space in Serene Centre, with some seats scattered around. If you like Al Fresco dining, also known colloquially as ‘roasting alive under the sun’, you can dine outside by the corridor. I opted to sit inside the building, where they placed a few striped dressed tables near the door walkway.

The menu is pretty simple- appetizers, mains, desserts and help yourself can-drinks. No more than 5 items in each category also. I’m a huge fan of foie gras and wanted to go for the pan fried foie gras with orange confit, but my date didn’t like the taste of umami awesomeness. So I ordered snails instead: escargots on toasted croissant, while she ordered boring tomato soup (really, how vividly can a tomato soup be described). I have to say, the escargots were brilliantly done in this garlic, basil, creamy sauce clasped between a sweet, crispy croissant pastry. Why does everything sound perverse out of my mouth. With the mix of dry crispiness and wet thick heavy sauce, this was an amazing recreation from just having snails baked on a plate. Tomato soup was… okay. For mains, sirloin steak, and duck confit with gratin. The sirloin steak came with so much salad on the side, I thought I heard the cow still grazing. Pretty lean cut of meat, with little fat, but cooked at medium rather than the medium rare we wanted. More to the dry side, but my date seemed to like it. Not sure if it’s just a nostalgia thing because she’s one of the princesses that used to come here after school, while I hung out at McDonald’s. 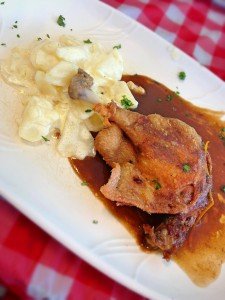 The duck confit was superb though. One of the best I’ve had, better than Saveur. After you peel the crispy skin outside, you reach the tender flesh that has been marinated just well, not overly dry. The creamy potato gratin was also very good as a pairing to the crispiness. A must try here.

P.S although the French red wine is pretty cheap, I found sediments and a weird stale “opened-for-a-week” taste. Also, water is self-service and comes with 1 impatient waitress.