I still remember the first time I tried souffle pancakes was at Gram Cafe & Pancake in Osaka. I was sceptical at first and thought to myself, other than being Insta-worthy, how good can they be?

But it was love at first bite. And I ended up returning to Singapore in a desperate search for good souffle pancakes.

Sad to say, it wasn’t very successful — until I heard that Riz Labo Kitchen, a popular souffle pancake shop from Tokyo has finally opened a pop-up in Wisma Atria’s Japan Food Town. I immediately pinned high hopes on it. 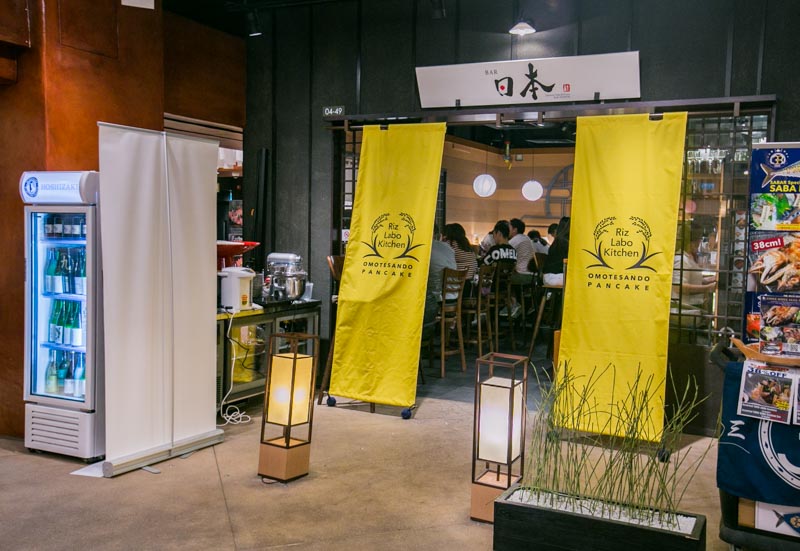 The pop-up cafe occupies the compounds of Bar Nippon from now till 20 October 2018. The pancakes are only available in the day as Bar Nippon takes over operations from 5pm onwards. 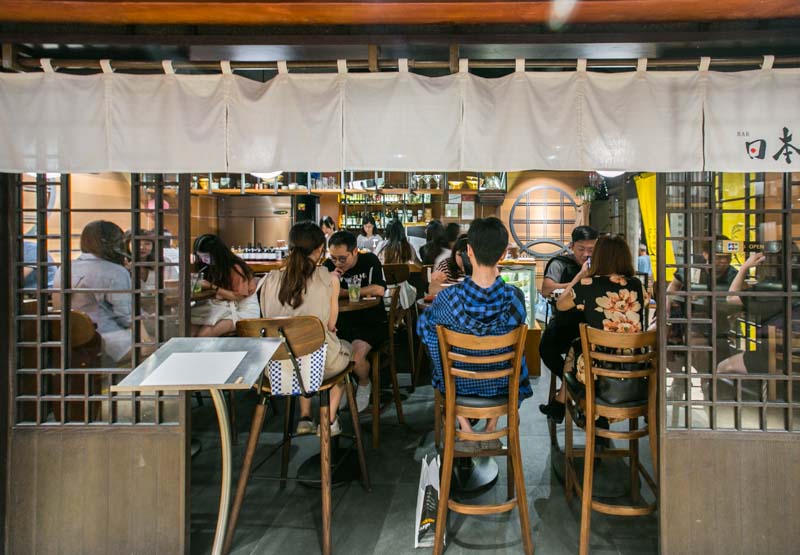 With approximately 20 seats crammed together within close proximity, there was little to no privacy. The dim lights did nothing to elevate the atmosphere and I felt slightly claustrophobic. Prepared upon order, Riz Labo Kitchen’s pancakes are gluten-free and made from scratch with organic rice flour, brown sugar, Hokkaido sweet soybean and soy milk. Most of these ingredients are imported from Japan. 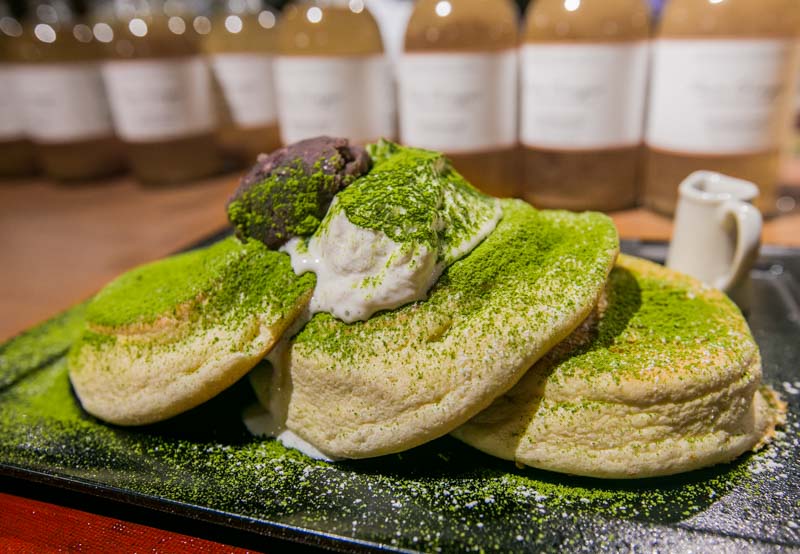 As an avid fan of all things matcha, I knew that I had to have their Matcha souffle pancakes. After much anticipation and a lengthy 45 minutes wait, my order finally arrived.

As the plate descended on the table, the fluffy pancakes, perched precariously over one another, began to wobble. I immediately crossed my fingers, hoping that they would taste as good as they looked. Atop the bed of thick and pillowy pancakes was a dollop of stewed azuki bean (red bean) paste and a generous scoop of fresh whipped cream.

For the finishing touch, they sprinkled a copious amount of matcha powder, which according to Kazu, was the highest grade Kyoto Uji Matcha powder. 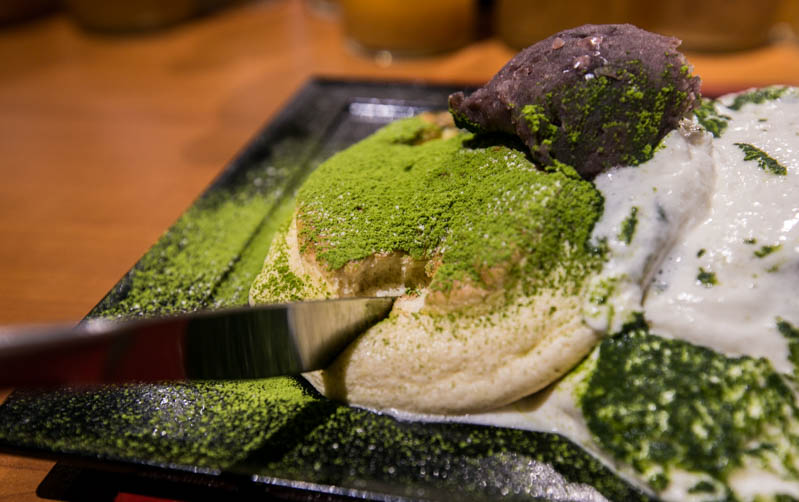 Appearance-wise, it sure looked promising. However, upon wedging my knife into the pancake and dissecting it, I felt a little underwhelmed. The insides resembled the cross-section of a Castella cake, rather than the light and creamy souffle I was expecting. 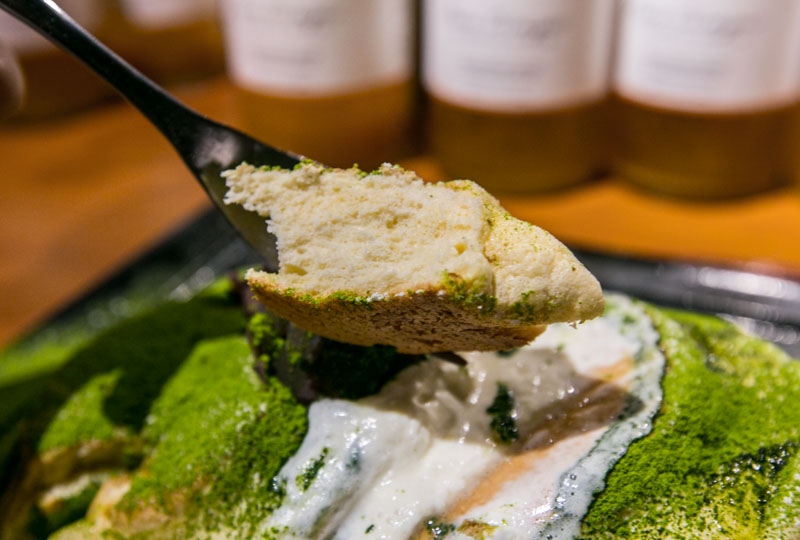 I have to admit that it was really fluffy, but it fell on the drier side. Perhaps they may have left the pancakes sitting on the griddle for a tad too long. I ended up relying on the maple syrup and whipped cream to help me get through the plate of pancakes.

The pancakes were rich and decadent but can get quite jelak after a couple of mouthfuls. To be honest, I felt that in terms of the taste and texture, it resembled a ‘cake’ more than ‘pancake’. Albeit not a fan of bean paste fillings, the stewed azuki bean (red bean) paste did somewhat manage to win me over. I liked how the bits of azuki beans gave the dish a nice textural contrast. For a refreshing and piquant kick to your taste buds between the mouthfuls of pancake, I would recommend getting their Iced Organic Ginger Lemonade ($6).

Given the hype and steeper pricing of the items, I was expecting way more from Riz Labo Kitchen. I’ve heard mixed reviews about the pancakes, with some people raving about it and others deeming it as gimmicky. Sad to say, my sentiments resonate with the latter.

However, I still think it’s worth a go as it’s probably your next best bet if you’re not heading to Japan anytime soon. That being said, with the increasing popularity of Japanese pancake shops sprouting up across our island, which would actually take the (pan)cake? We’ll leave that to you guys.

Previous articleHave A Break With These Nespresso-Compatible Earl Grey & Peach Green Tea Capsules By A.Muse Projects
Next article11 Chinese Restaurants In Singapore That We Can Vouch For