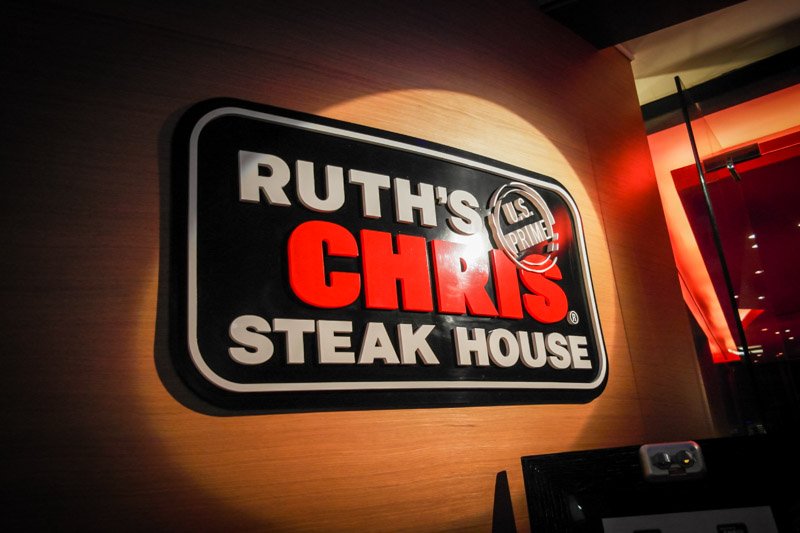 Ruth’s Chris Steak House originates from New Orleans, Louisiana by Ruth Fertel, a mother of two who bought over “Chris” Steak house which had been operating for 38 years prior- thus Ruth’s Chris was born.

With more than 130 outlets worldwide, Ruth’s Chris finally entered the Singapore market in August 2012 and looks ready to compete with the local incumbent name in US steaks: Morton’s Steakhouse.

After eating through almost every well-known steak house in Singapore, Ruth’s Chris was the last one to cross off my list. 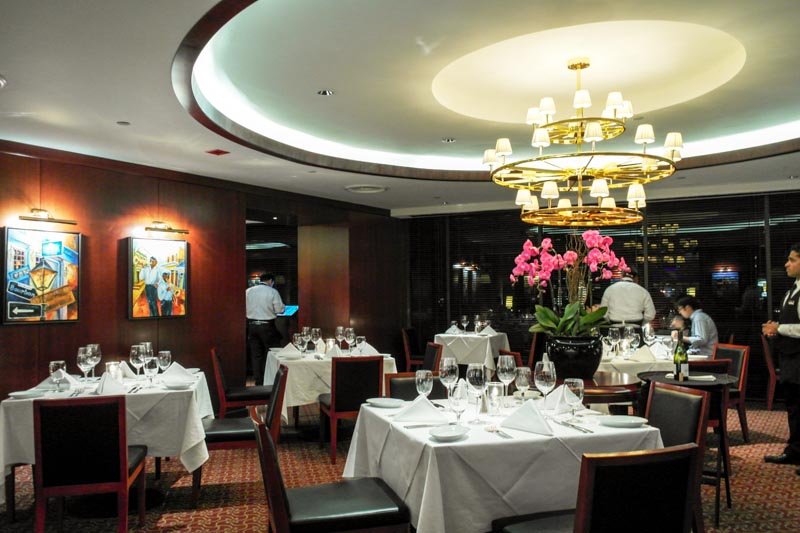 This upscale restaurant features a modern take on the American steak house, with wood panel walls, thick carpets and a classy chandelier hanging as its centerpiece. Tables are covered in a simple white tablecloth, accompanied by sleek black leather chairs. Barbecued Prawns with Creole Butter ($35). Large shrimp sauteed New Orleans-style in reduced white wine, butter and spices like cayenne pepper. The Worcestershire and tobasco sauce adds some zing to the buttery shrimps, which are massive by the way, for a full-bodied experience. A blend of Creole cuisine with fine-dining for shrimps as good as garlicy Spanish gambas ajillo. 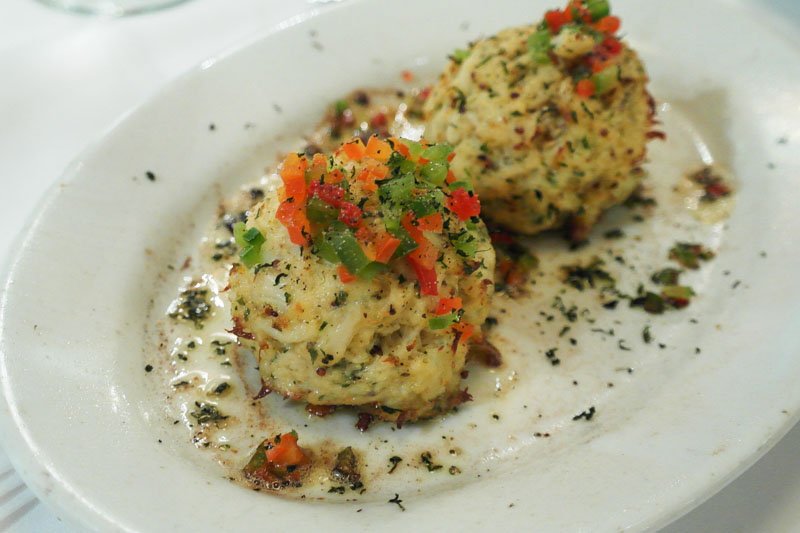 The crab cakes had a low ratio of breadcrumbs, showing the generosity of ingredients. Small chopped bell peppers were intended to break the monotony of crab meat, but perhaps with a bit more lemon juice in the butter sauce the dish could be elevated more. A little flat otherwise. We learnt that lemon wedges used to be provided previously, but management stopped doing that, a regretful decision in my opinion that should be reversed. Seafood Gumbo Soup (Soup of the day, market price). A country stew mix with crab, chicken sausage, bellpepper and onions with rice on the side. Quite rustic with its creole origin. soup can get a bit ‘jelat’ after a while though and is best paired with rice to soften the repetitive salty flavour. Perhaps due to the raw onions, the salad had quite a sharp bite with the dressing not really easing this piquant flavour. Perhaps more acidity, sourness, or spiciness would better balance the dish. The crisp fried onion ring on top was excellent though, and the nuggets of bleu cheese also added great texture and variation. USDA Prime Ribeye (340g for $85, 450g for $110). Deliciously marbled, the large fats are quite obviously scattered all around while the meat sort of falls apart by the fibres easily. 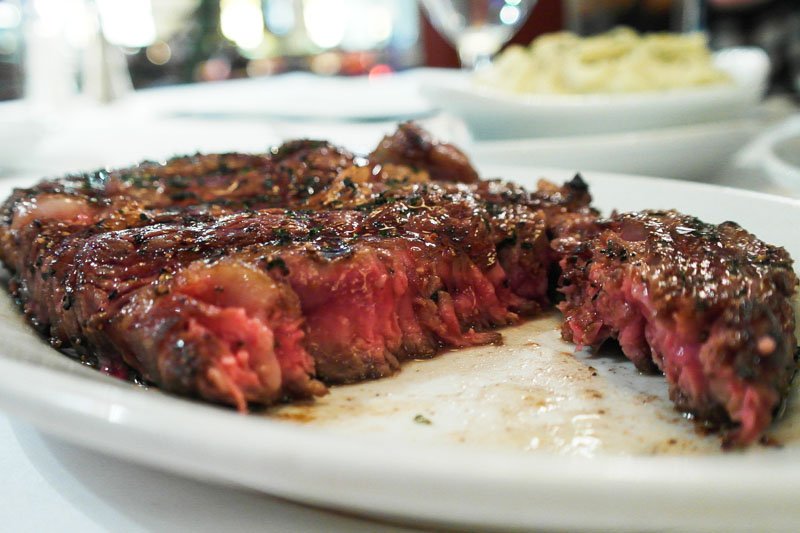 In terms of fats, I would prefer smaller nodules and distributed a lot more evenly though, with the meat itself having more structure rather than hanging by the fibres. But still, juicy no doubt with a medium finish of beefiness. 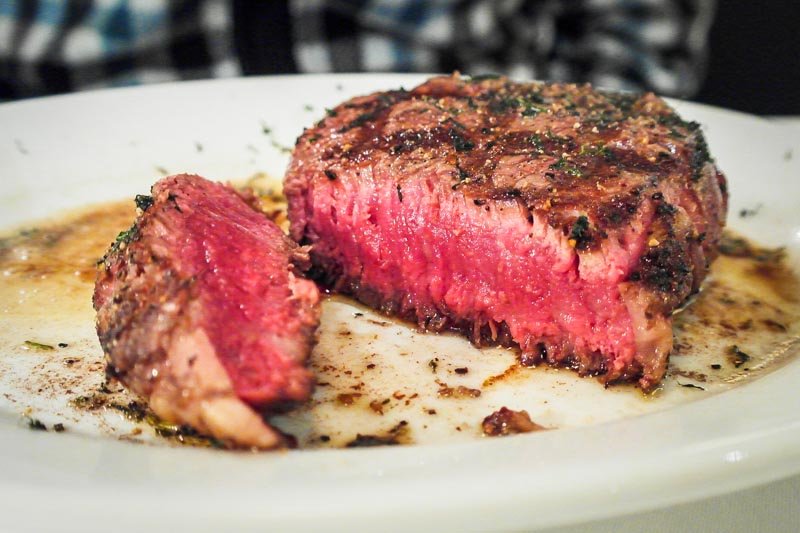 USDA Petite Filet (230g for $80).  In terms of meat structure, this steak had it all. Tender to the bite yet holds its form to the cut of a steak knife perfectly. The Petite Tender, which comes from the shoulder cut, had a natural tenderness that was really unbelievable, almost as if tenderizer was used. But this is definitely not the case with Ruth’s Chris- it’s just really good meat. Highly recommend this cut of meat over the ribeye, even though ribeye is my favorite cut. 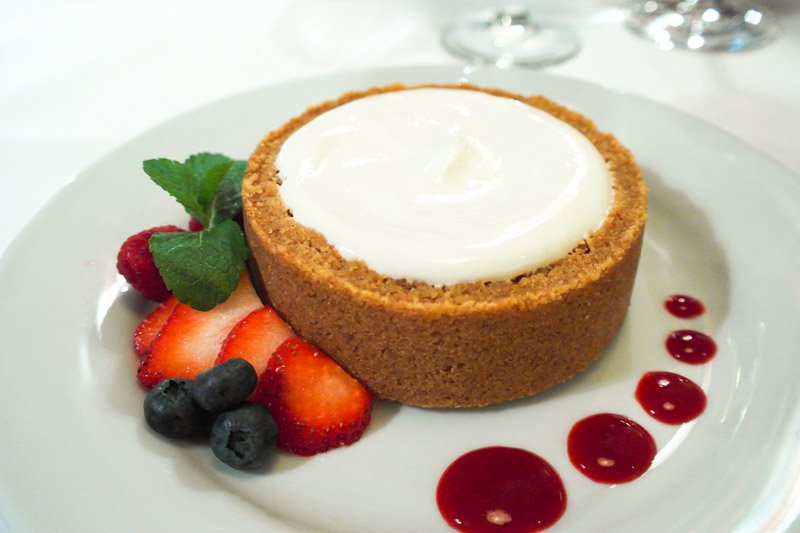 Cheesecake with Fresh Berries ($25). A buttery cake base with smooth cream cheese within, the tangy berries add a nice tough although I could just eat the whole cheesecake just alone. Large enough to feed 2 or 3. USDA Prime beef uses only the top 2% of US beef, which are graded primarily for marbling and a younger age. Tenderness is to be expected, but I reckon the variety of meat flavour-wise, Australian beef seems to edge out a little better especially with a bit of dry-aging.

Ruth’s Chris steak house is nevertheless a good choice for US steaks and can go toe-to-toe with Morton’s. Ruth’s Chris however, infuses a country-side character into their dishes, which can be refreshing in this 120 seater fine-dining concept. Portions, as with American-style diners, are huge so you won’t be walking away gingerly. Sides are a little standard though, with the usual suspects like mashed potato, and I’d recommend ordering the appetizers instead especially the barbecued prawns.

Related Guide: Best Steaks You Can Find in Singapore