The word okonomi in okonomiyaki means “how you like” while yaki translates to “grill”. So how do you like your grill?

This question will be thoroughly and personally answered at Seiwaa Okonomiyaki & Teppanyaki Restaurant tucked away along Dunlop Street in Little India, with their wide selection of Japanese grills which you can cook yourself. 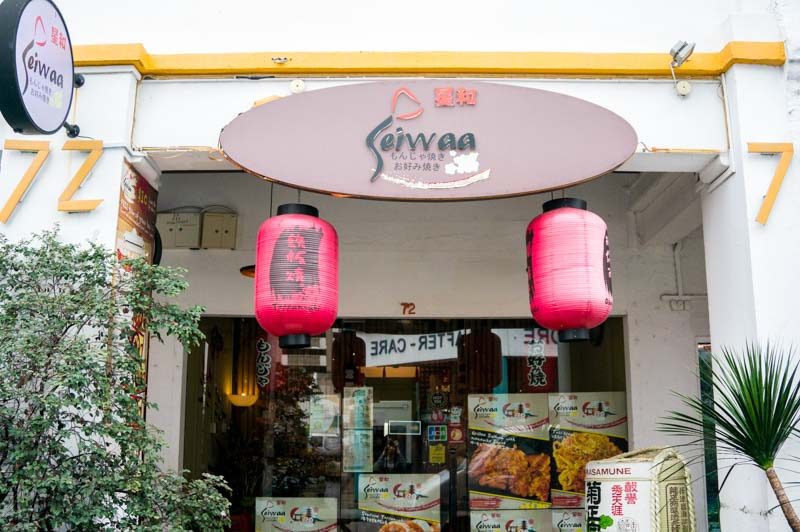 I struggled to find the storefront, but you just need to keep an eye out for red lanterns and the typical sake barrel by the door plastered with posters to find your way through the bustling neighbourhood of Little India. 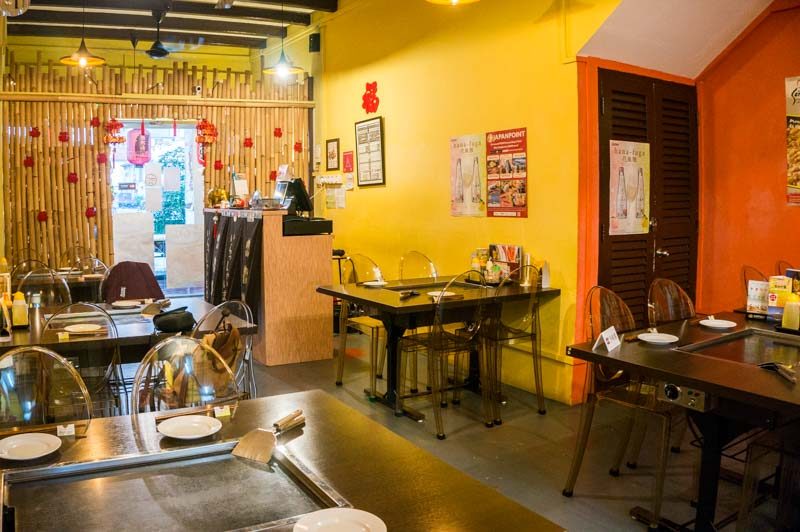 Stepping into the cosy and vibrant dining space with walls painted in bright orange and yellow, I was greeted with an upbeat Japanese music jingling in the background.

For those who are smoky-food-stench conscious, the area was rather well-ventilated as well, so don’t worry! 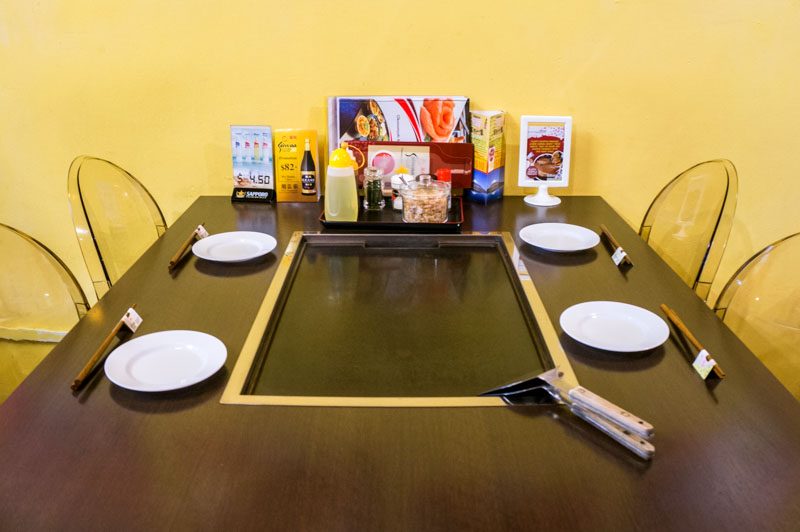 Each customised table was fitted with a teppan (hotplate) specially imported from Japan, complete with a pair of grilling spatulas for customers to enjoy the DIY experience to the fullest. 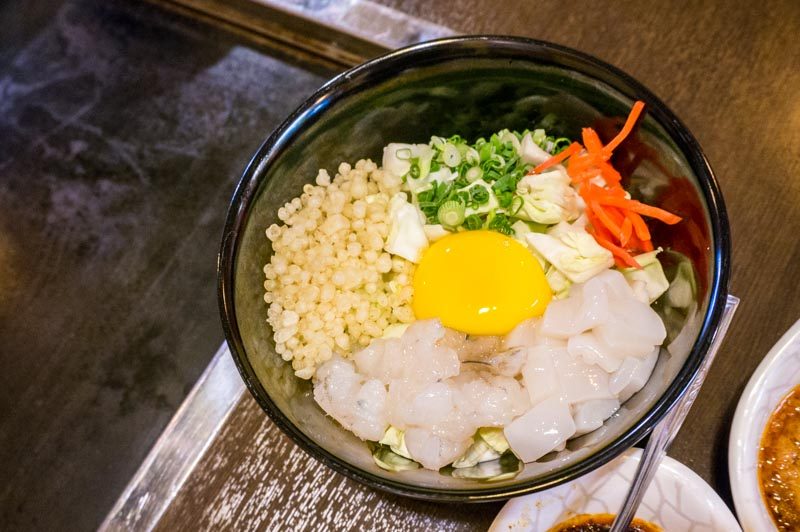 Both came with a bowl of diced shrimp, squid, shredded carrots and chopped spring onions on a bed of fresh cabbage topped with an egg. The sambal and tom yum sauce each came in small bowls and I was instantly hit with the waft of the familiar sambal’s sharp spiciness and tangy tom yum. After pouring the sauce individually into the bowls, we worked our biceps (the only exercise of the day) to mix the ingredients until it became a uniform, orange paste. Then we carefully ladled the mixture onto the heated hotplate and shaped it into flat, round shapes. If you want your okonomiyaki to cook evenly, make sure to pour the mixture near the centre of the teppan. 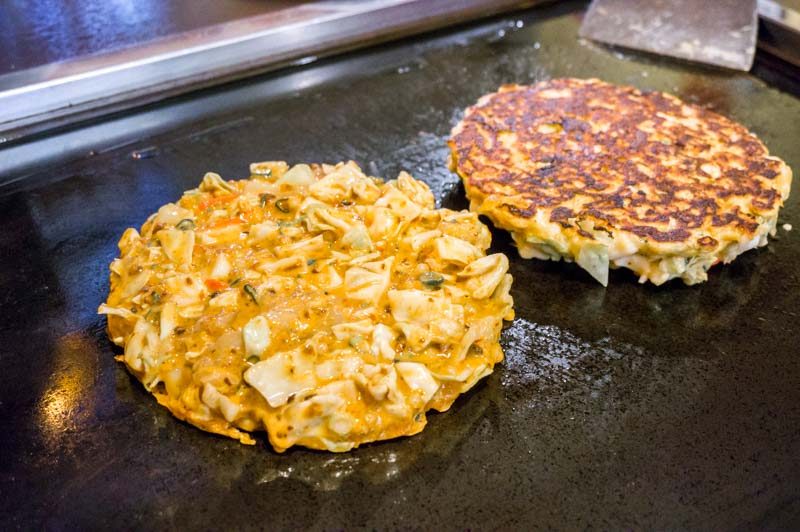 Each okonomiyaki took seven minutes to cook and by the time I flipped over the pancake and saw its perfectly browned surface, I was calling myself a masterchef.

While the Sambal Okonomiyaki had a dark orange hue, the tom yum was a lighter shade of orange-green. 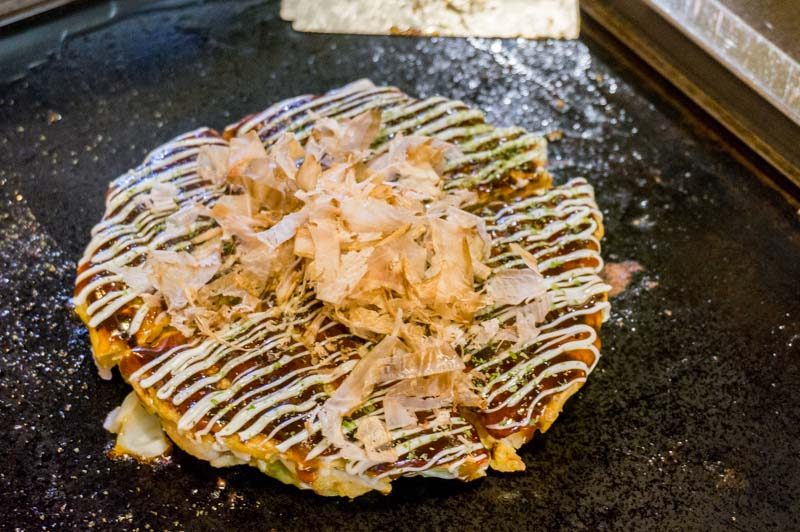 As soon as the Sambal Okonomiyaki was evenly cooked and finished off with a smear of okonomiyaki sauce, streaks of mayo, aonori (seaweed flakes) and bonito flakes, I dove in for a bite. The chewy diced squid and succulent shrimp elevated the texture of the pancake along with the softer crunch from the cabbage.

I could definitely taste the sambal, but the distinct flavour dulled into somewhat of an ordinary spice-level on my tongue. The overall essence of the okonomiyaki, however, was nothing short of authentic. If you can’t take spicy, this okonomiyaki won’t be an issue. 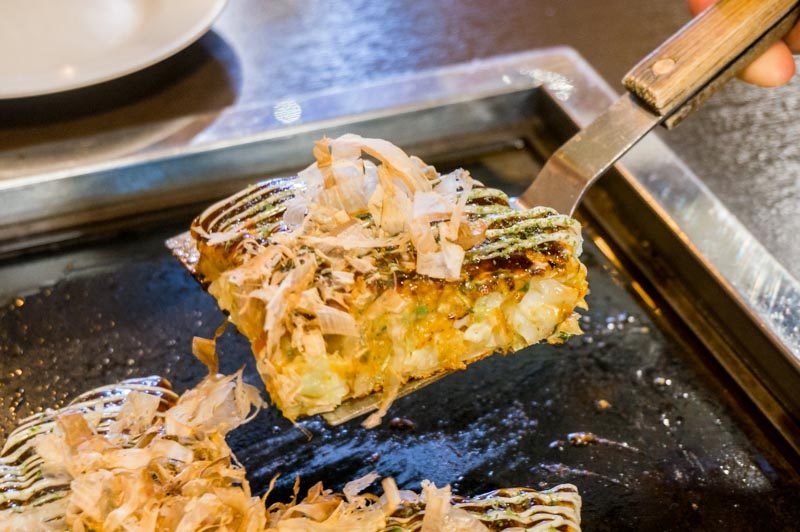 We moved on to the Tom Yum Okonomiyaki, which was delicious despite its quirky fusion. The sourness of the Thai soup flavour burst in my mouth, along with the sweet okonomiyaki sauce and fishy bonito flakes overlapping in a strangely pleasant unison.

Just a word of advice, eat the okonomiyaki while it’s still hot because the fluffy layer eventually dries up. 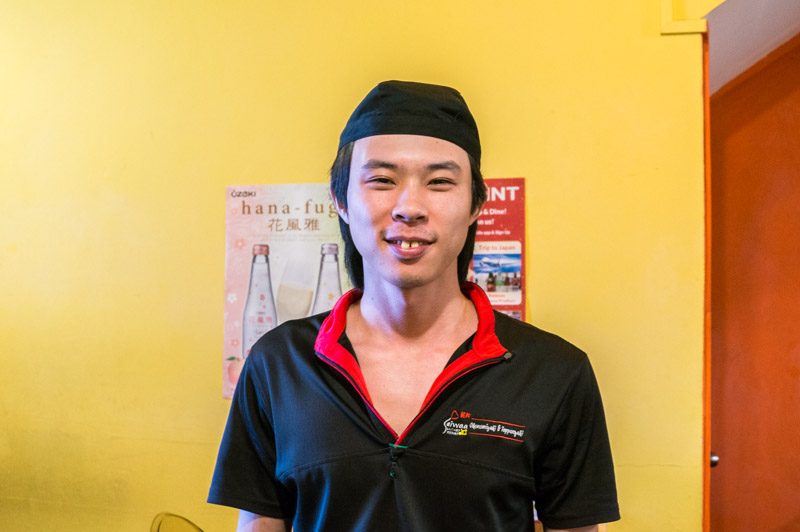 Grilling your own okonomiyaki is always fun and can be a breeze, but for more complicated meals, you could either continue challenging yourself for DIY food or ask the staff at Seiwaa for assistance.

During our visit that day, we were greeted by the friendly Hide-san from Hokkaido who helped us grill the upcoming meals. A mountain of shredded cabbage topped with thin slices of pork layered upon one another and a bowl of two eggs on the side was served next. I had never had Tonpeiyaki ($12) before, so I was excited to see how all the ingredients would come together. To begin with, the slices of pork were laid on the hotplate to sizzle till golden brown for the extra crispiness. And boy, was the aroma of grilled pork heavenly. 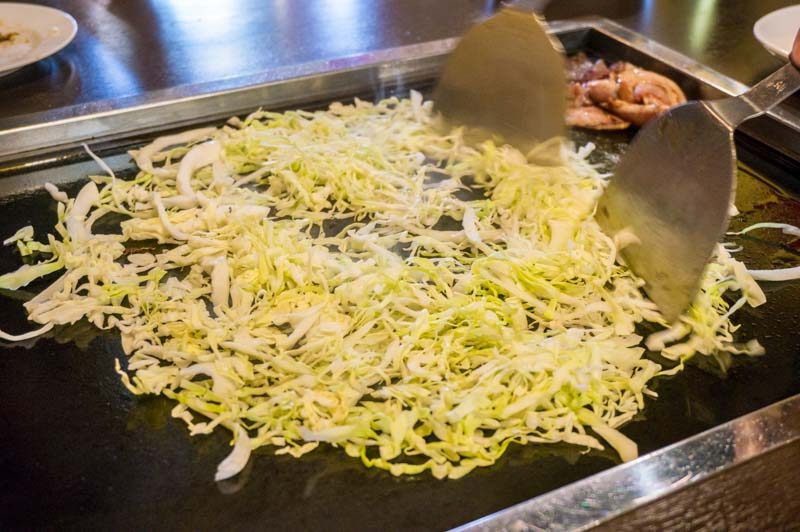 Setting the pork aside, the shreds of cabbage were thrown in and rigorously stirred by Hide-san, so much so that the spatulas were a blur to my eyes. 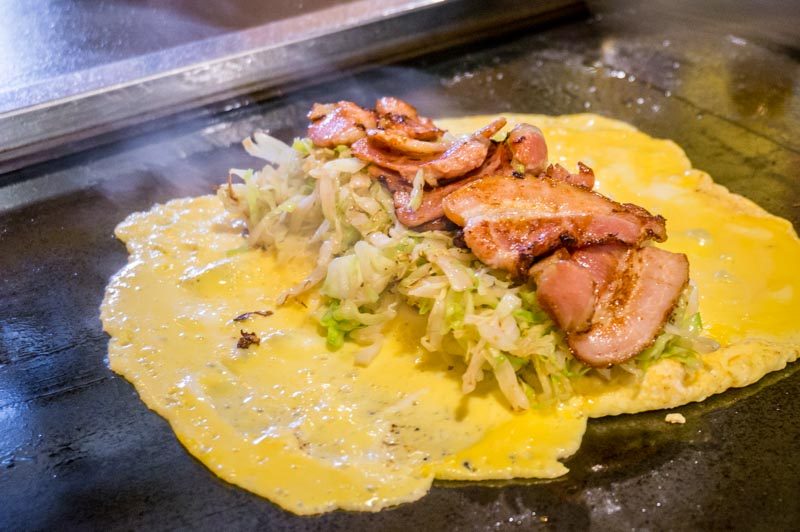 The beaten eggs were then thinly spread across the surface of the grill and the stir-fried cabbage and pork were piled in the centre. I was hypnotised by the delicious trail of smoke and helplessly stared at the still-in-progress food, hovering my chopsticks here and there. 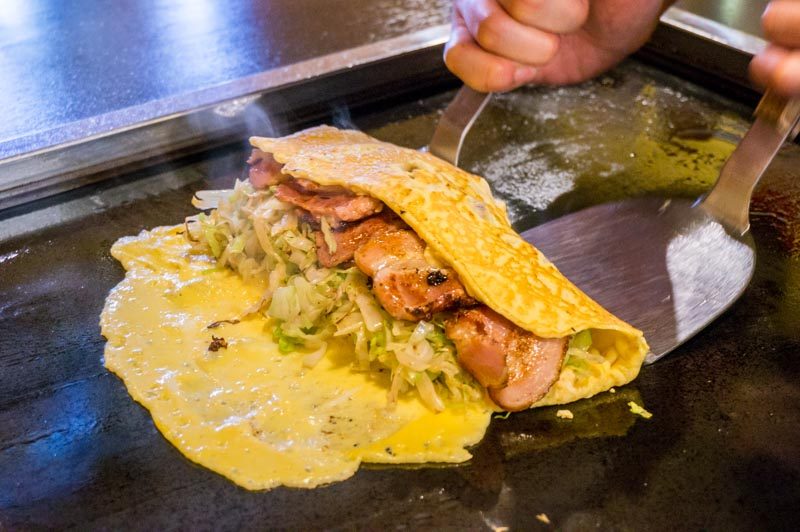 After leaving it to cook for awhile, Hide-san folded the egg layer inwards to the middle and wrapped the pork and cabbage into a burrito — in this case, a Japanese burrito.

Finally, the tonpeiyaki was plated neatly, drizzled with the usual okonomiyaki sauce, mayo and dusted with aonori. The moment I had a mouthful, I knew why this was highly recommended.

The pork was so tender and surprisingly juicy despite its thinness, while the cabbage and fluffy eggs mitigated the saltiness of the meat. Definitely coming back for this! 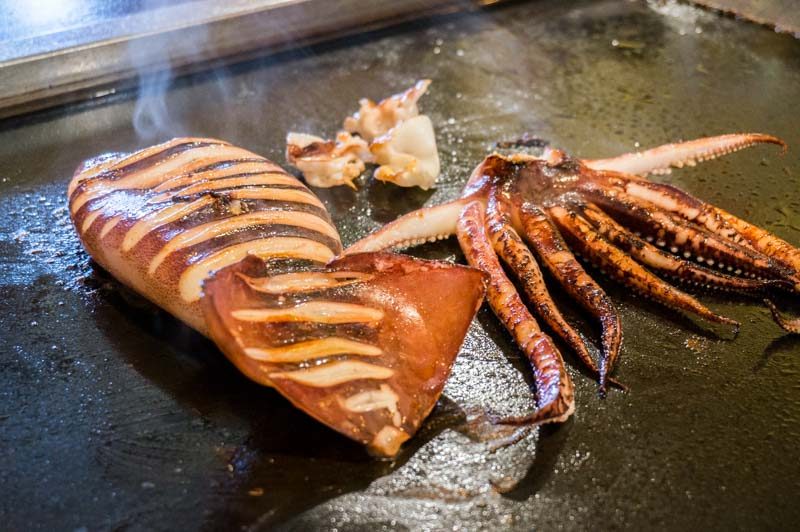 Yet another recommended item on the menu was the Whole Squid ($18). And yes indeed, it was a whole squid laid out onto the teppan to grill, neatly separated into the different parts. 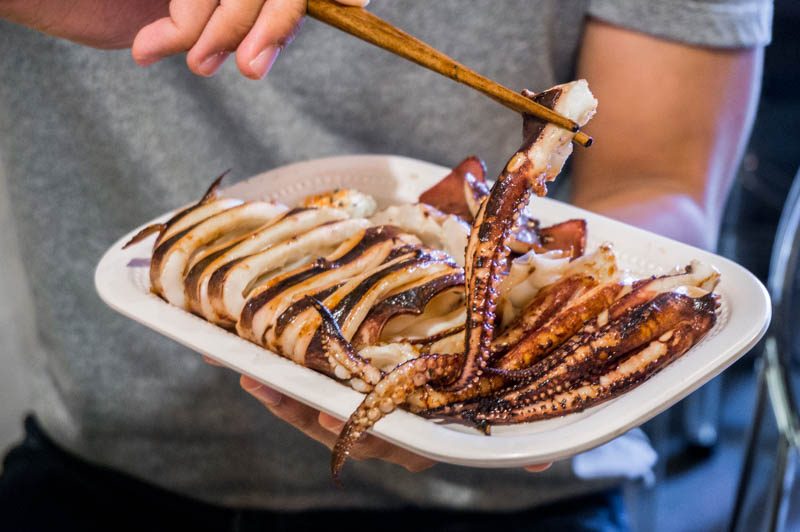 The lightly burnt surface gave off a mouthwatering char and fragrance, with the different parts of the squid boasting various textures, from soft to springy. For the steep price, I wouldn’t particularly go for this dish but for the taste, it was definitely worth it. I’m an avid Japanese food fan, but it was my first time hearing about monjayaki. Monjayaki is similar to okonomiyaki but in a more liquid form of pan-fried batter. Despite its popularity in the Kanto region, not many of us are aware of this dish so I had to try it, ignoring my already full stomach.

The Seafood Monja ($12) came with cabbage, cubes of squid and shrimp and dried shrimp in a bowl. For extra flair, we added toppings of mentaiko ($5) and cheese ($2). 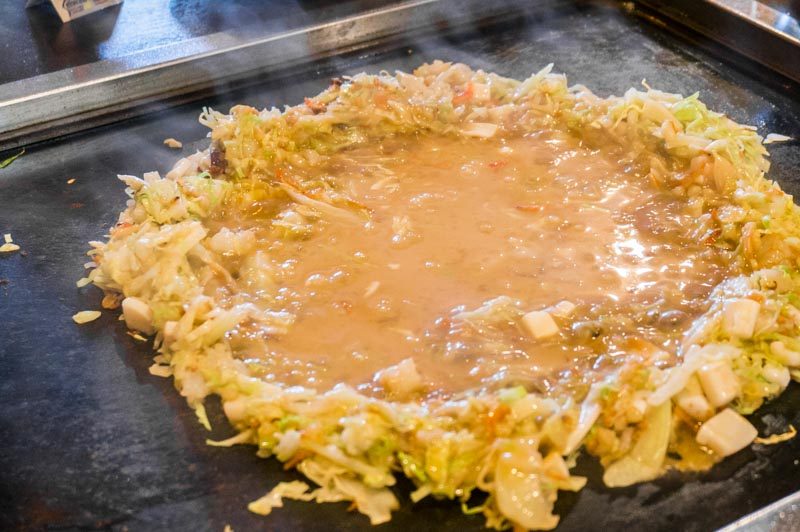 Hide-san adroitly stir-fried all the ingredients together on the hotplate but this time, he formed a ring and poured dashi (cooking stock) in the middle, letting it simmer until it bubbled into a goopy consistency. 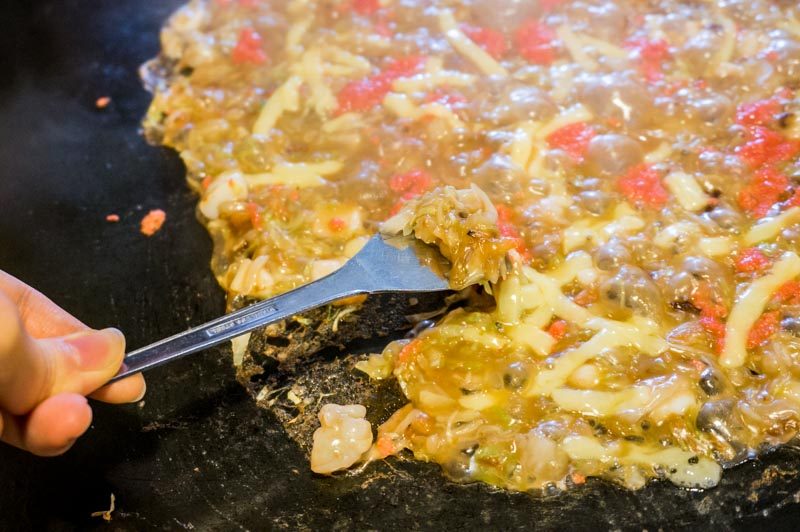 The mentaiko and cheese were sprinkled on top of the thinly-spread monja and once it was ready, we were given mini spatulas to scrape up and eat it directly from the teppan. The monjayaki was unlike anything I had eaten before.

It was mildly salty yet sweet from the shrimp and squid with accents of savoury mentaiko and melted cheese, all in a chewy semi-gooey consistency. And if you’re having this, the best part was the scorched bottom layer of the monja. Honestly, we raked the hotplate squeaky clean. Who knew you could also grill your own dessert? The Fluffy Souffle Pancake ($8 for half portion, $12 for full portion) came with a pre-made batter and all I had to do was lump them onto the buttered surface of the hotplate into poop emoji shapes. After grilling both sides of the souffle pancake, we drizzled the gula melaka sauce on and let it soak. 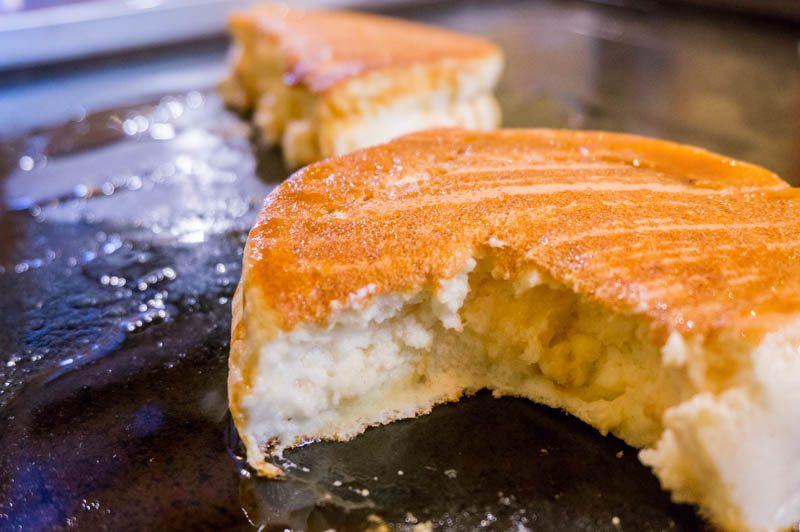 I knew it was going to be good when the pancake jiggled as I cut into it. Fluffy, soft, airy yet creamy inside, it was no doubt one of the best souffle pancakes I’ve ever had.

The caramelised gula melaka sauce on the hotplate was oh-so-sinful but oh-so-sweet, instantly giving me the sugar fix I needed.

As a foodie, I thought I was quite the expert on Japanese fare but after a lunch session at Seiwaa, I realised I’ve only scratched the surface.

Not only will Seiwaa Okonomiyaki & Teppanyaki Restaurant guarantee a new side of Japanese grills with dishes like the Tonpeiyaki and Seafood Monja, but they will also make your dining experience a fun one with the flexibility to DIY the food.

And honestly? I wouldn’t dare pass on the souffle pancakes if I were you.