Say goodbye to flying to Hong Kong, Korea or Japan to satisfy your burger cravings. There was plenty of space in the beautifully designed store. Sleek and modern with heavy use of concrete and wood, the two-storey flagship had a long counter spanning the entire first floor that’s for food collection and ordering. The seats are cosy, intimate wooden booths which I foresee will be well-used by friends and families chatting over a meal, and students seeking to study in a more private space. We first tried the ShackBurger (S$9.20/Single, S$12.90/Double), which is Shake Shack’s rendition of the classic cheeseburger. It comes with 100% antibiotic-free Angus beef, melted American cheese, crisp lettuce and light, fresh tomatoes. All of this on a buttered and toasted potato bun made for a winning combination that can’t be beaten. 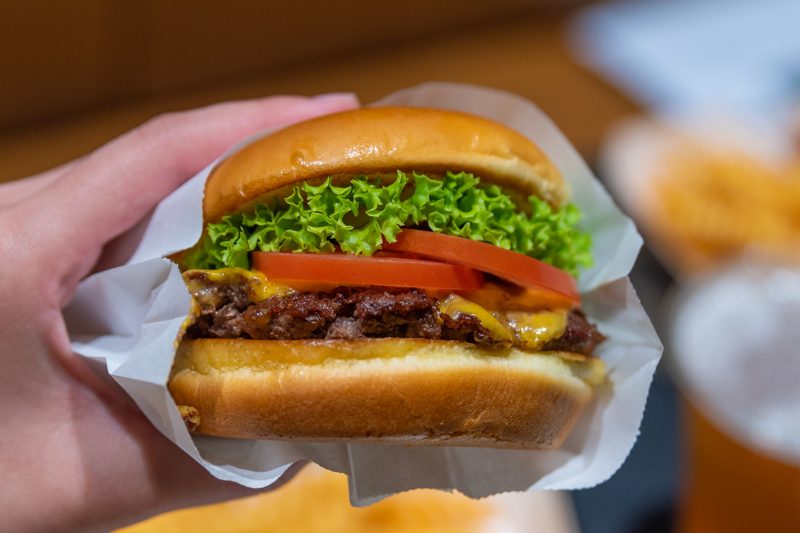 The Angus beef patty had a wonderful, textured crust, and a good level of browning, which translated into more meaty flavour. Paired with an ideal fat-to-meat ratio, this resulted in a full-bodied, juicy burger which had some bite. 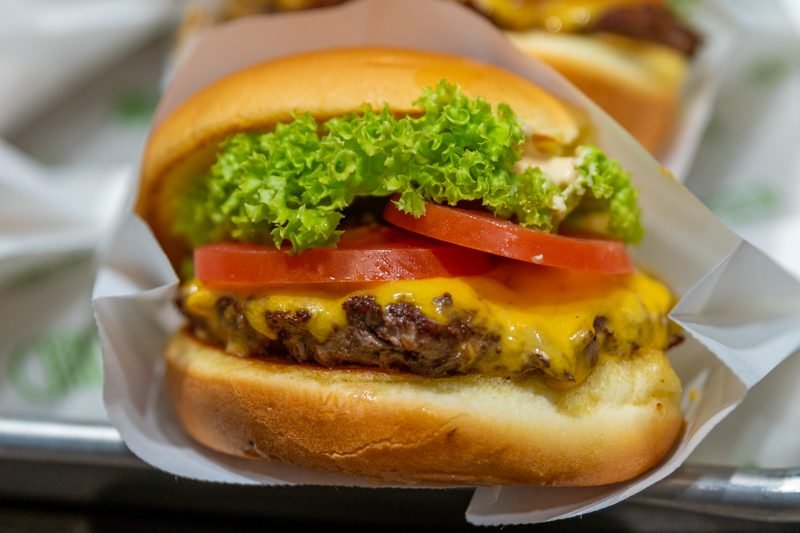 I really liked the signature Shack Sauce used, which I can only describe as slightly sweet and sour with a peppery kick. There were even undertones of mustard and spices blended into the deep, rich mayonnaise.

The burger we had was slathered in this special sauce, and the spices brought out the natural flavour and sweetness of the beef patty. 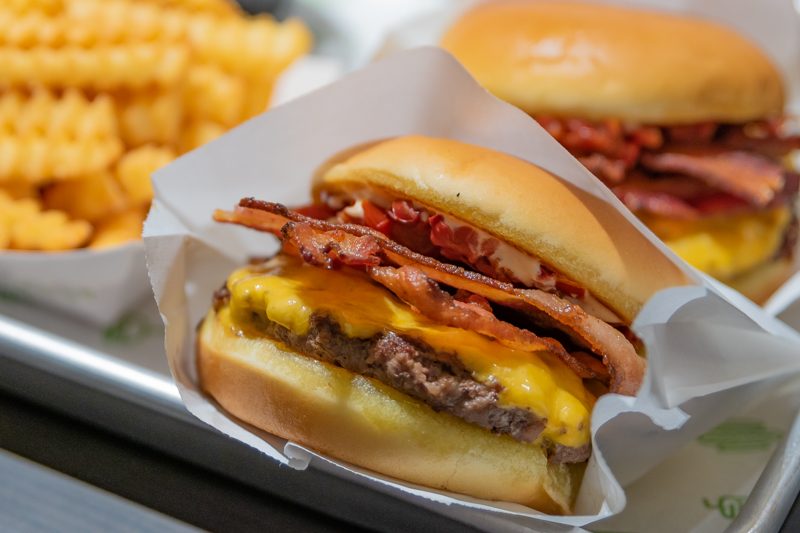 For a more indulgent burger, we had the SmokeShack (S$10.90/Single, S$14.40/Double). On top of the ingredients from the ShackBurger, the SmokeShack also includes all-natural applewood smoked bacon and chopped cherry peppers. 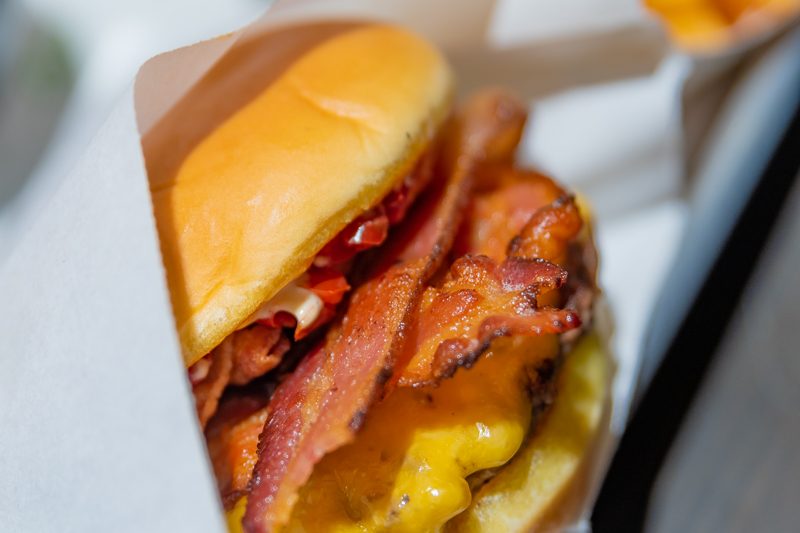 I initially expected the combination to be odd, but the smoky and sweet bacon did not overpower the full-bodied beef taste. The chopped cherry peppers added a spicy yet subtly sweet kick that I believe would be well-suited to the local palate. Most people might assume that burgers are exclusively a meat lover’s meal, but Shake Shack has our vegetarian friends covered with their ‘Shroom Burger (S$10.80). 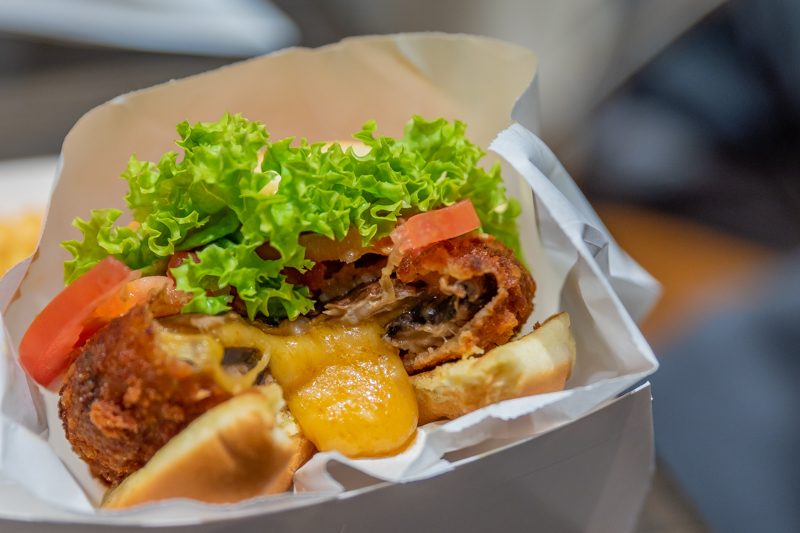 This vegetarian burger swaps out the beef patty for a crispy fried Portobello mushroom with a special blend of Colby, Monterey Jack and Tilsite cheeses.

The mushrooms had a deep, smoky flavour and a fleshy texture not entirely different from meat. Each cheese brought to the table a different flavour profile, and I thoroughly enjoyed the play between mellow and sharp flavours, as well as tangy and sweet notes. We also sampled some of the Crinkle Cut Cheese Fries (S$5.90, S$4.50 without cheese) available. Given the quality and taste of the preceding items, Shake Shack’s fries might be its one glaring weakness. The crinkle cut fries were topped in an addictive cheddar blend, but that could not make up for the fries. They tasted as if frozen then reheated, and were a little too thick for my liking. Furthermore, they were pretty bland on their own.

The funny thing about Shake Shack is that it started off as a stand that sold frozen custard and hot dogs in Madison Square, not burgers. Of course, we had to give those two items a try. 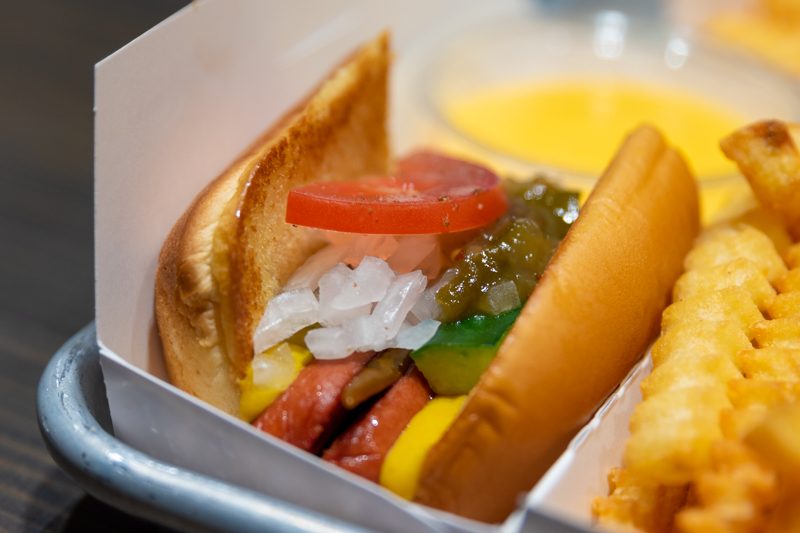 My friends who had Shake Shack overseas told me that the hot dogs were an underrated treat. Made from 100% hormone- and antibiotic-free beef and sandwiched in a warm potato bun, the hot dog had a good flavourful bite to it. 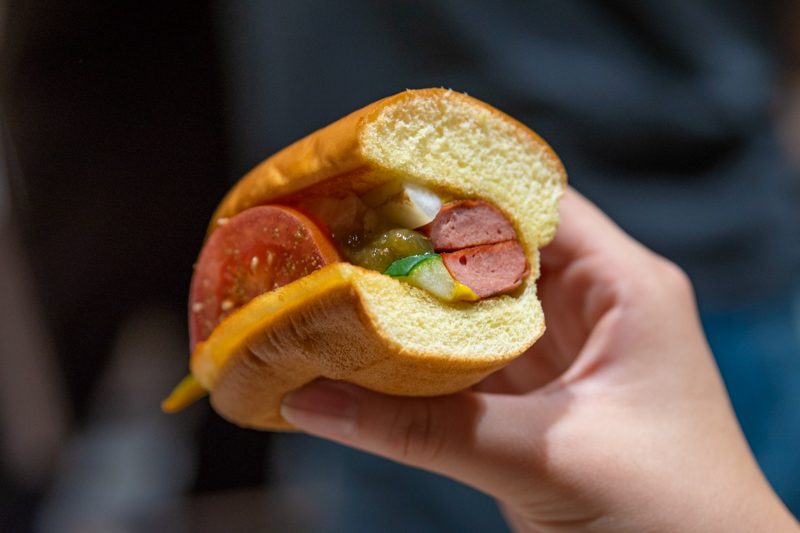 With the Shack-cago (S$6.50), you can add classic Chicago toppings (relish, onion, cucumber, pickles, tomatoes and mustard) to the hot dog. The toppings provided sweet, zesty and savoury notes without overpowering the flavour of the hot dog itself, and is certainly something I’d have again.

If you’re feeling thirsty, Shake Shack offers shakes in vanilla, chocolate, salted caramel and peanut butter flavours. Did you know that there are special shake flavours created for each Shack location?

Exclusive to Singapore is a coffee-flavoured shake using beans from local roastery One Man Coffee. 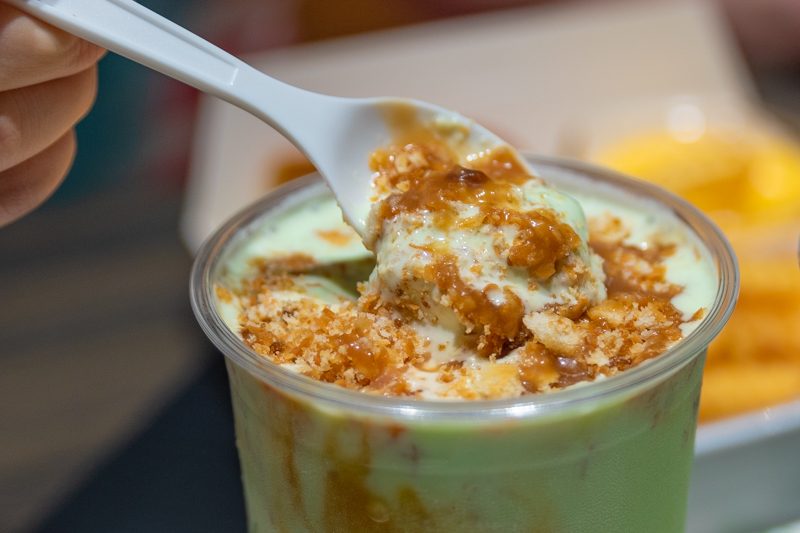 More interestingly, there is also a Pandan Shake (S$7.80) that is sure to satisfy you if you have a sweet tooth. 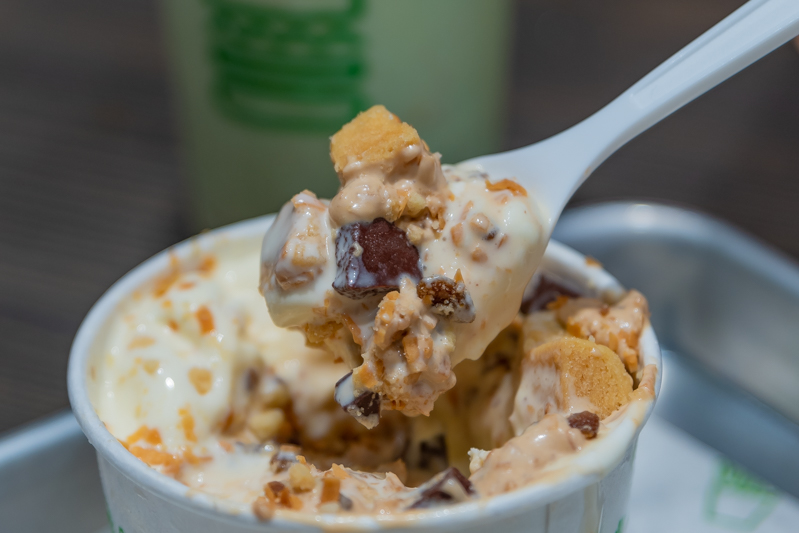 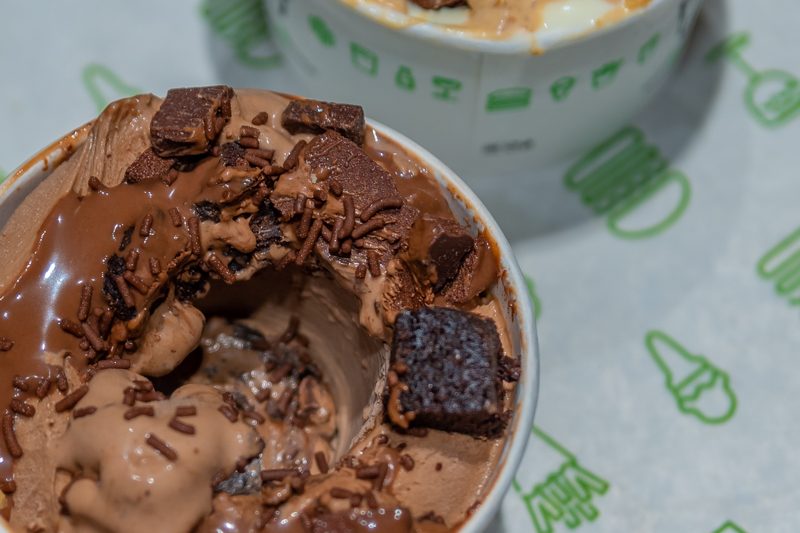 The Shack Attack (S$7.50 for a Single, S$9.50 for a Double) was thick and dense, similar to a gelato but creamier, due to the pasteurized egg yolks.

Chocolate custard, chocolate truffle cookie dough, dark chocolate chunks and chocolate brownies come together to create a chocolate lovers’ wet dream. I dare you not to like this item!

ShakeShack has certainly lived up to its almost mythical status. The taste of the food here was much more refined than regular fast food chains. Each item was clearly freshly-prepared and cooked, and the ingredients used were surprisingly high quality. 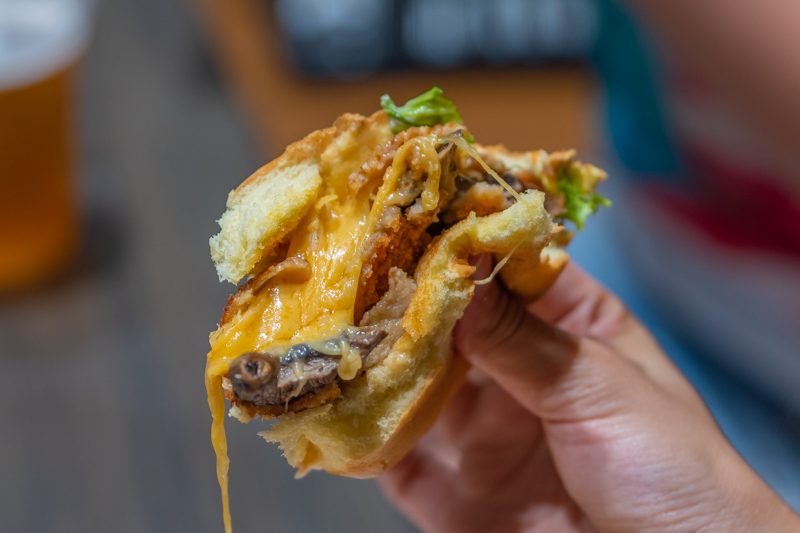 If I had to pick a favourite, it would be the ‘Shroom Burger (S$10.80) for delivering so much flavour without containing meat.

I’d love for Shake Shack to improve the Crinkle Cut Cheese Fries. Perhaps a skinnier fries would have a better crunch-to-fluffiness ratio.

Unfortunately, the Jewel flagship store isn’t very accessible. As a Westie, I can’t wait for more stores to spring up across the island!

In the meantime, we’ll have to make our pilgrimage down to the Jewel at Changi Airport to get our fix of this amazing burger joint. Shake Shack has certainly lived up to the hype!