“It’s hard to say which French restaurant I like, because Singapore has so few really good ones,” I replied, when my host asked where my favourite French spot in our tropical urban island is. “But this place has to be one of my favourites so far!”, I quickly added, to which her eyes lit up in excitement. 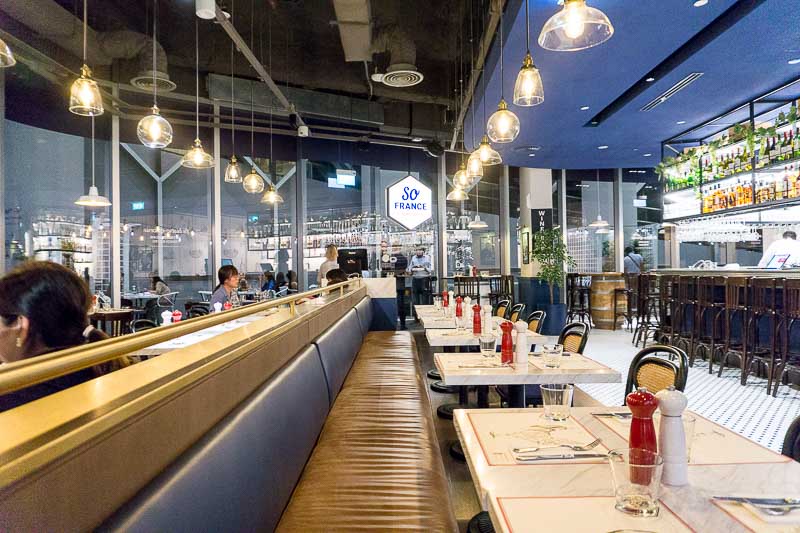 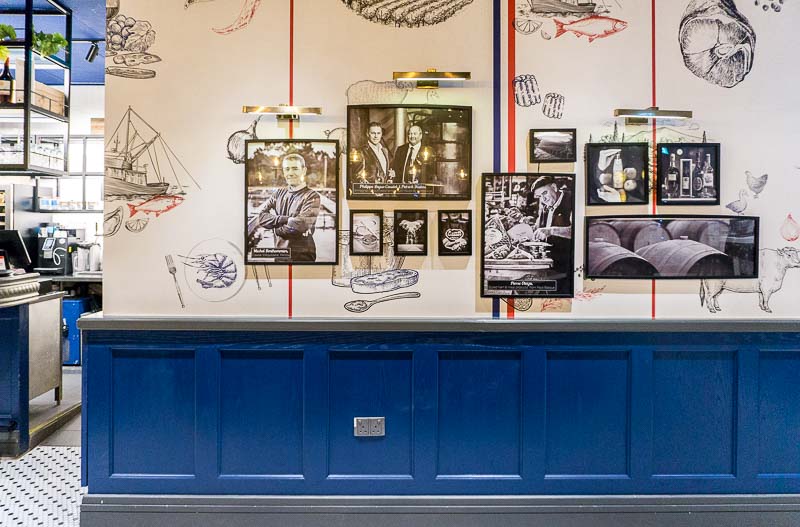 So France isn’t exactly a spankin‘ brand new casual French restaurant at Duo Galleria, but it has given itself a make-over that now sees homely, humble dishes on its refreshed menu.

When I went there on a weekday evening, the place was lively for mid-week dinner service, and the decor was in thematic red, white, and blue—just like the French flag. 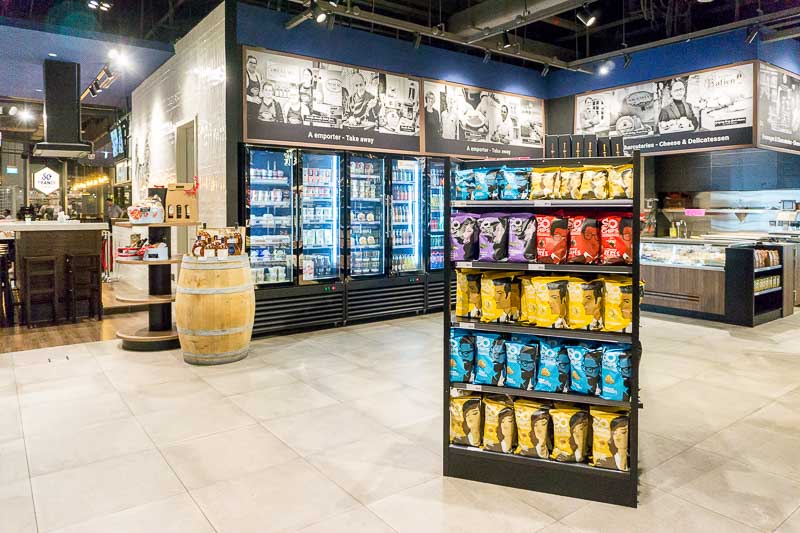 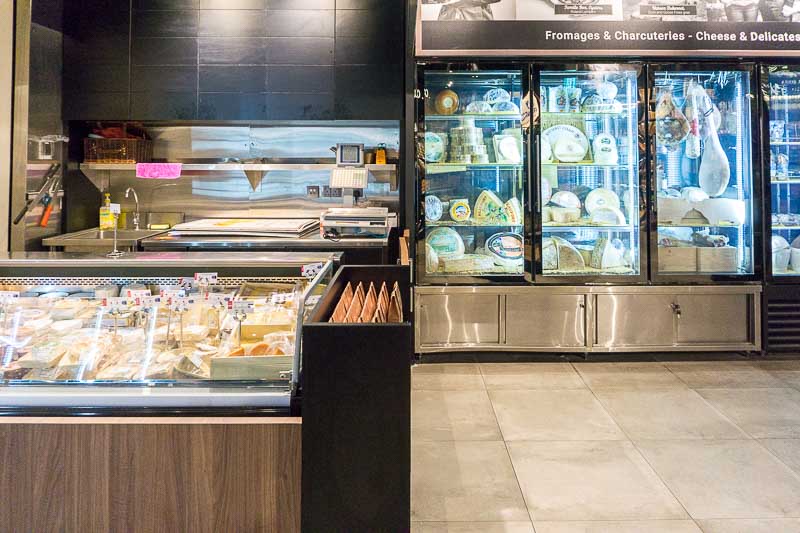 The best part is the épicerie (grocer’s shop) attached to the restaurant, highlighting the best of French food brands, from dairy goods, to snacks, to cold cuts, to French wines. Before dinner, I headed straight to one of the fridges where they stock the highly-regarded and sought-after Bordier butter.

I purchased a block of the Smoked Salt variety and a baguette, which I requested to be kept aside for me while I went ahead to enjoy my French feast. 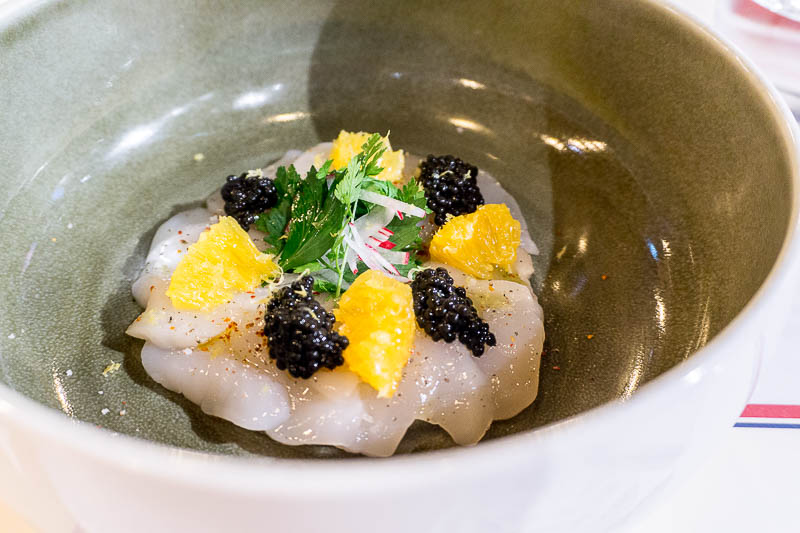 It was bright, fresh, sweet, sour and just a hint of zesty. The lemon caviar was a fun touch, as it lent a not-so-heavy brininess—great for getting the appetite going, but not too heavy that it weighed down the palate. It was only the second dish of the evening, and even so, I knew this was going to be my favourite—or at least one of my favourites—of dinner. The Oeufs Meurette (S$20++) is a traditional Burgundian dish, widely believed to have been first created by using the remaining sauce from beef bourguignon.

Poached eggs are delicately held in a moat of homemade red wine sauce (made with beef and chicken stocks, veal jus, shallots, vinegar, red wine, and finished with butter) with lardons and pearl onions on sourdough bread. 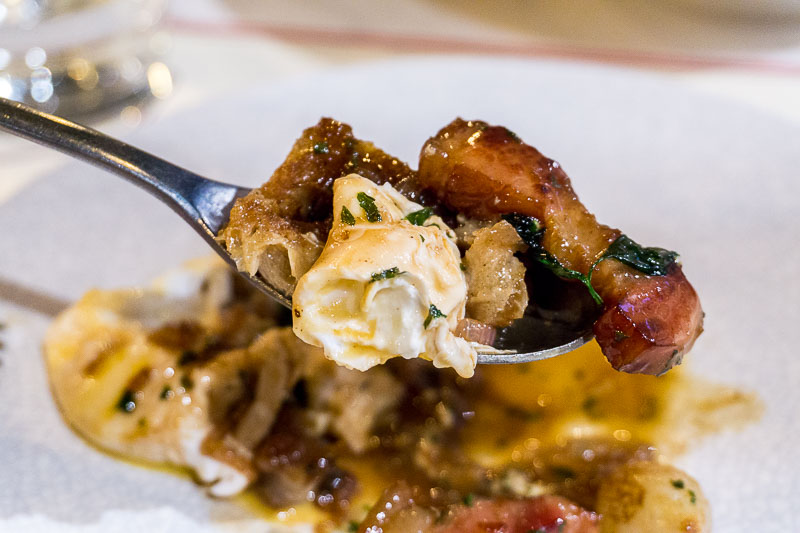 It’s commonly enjoyed during the cooler climates in France, as a hearty, soothing dish. No matter, our climate didn’t deter me from lapping up every drip of egg yolk and red wine sauce with the accompanying sourdough bread. It reminded me very much of shakshuka (a Middle Eastern dish which features poached eggs in a hearty tomato pepper sauce), but here, the lardons certainly played a vital role in giving the dish a salty complexity.

Also, the veal jus really came through, making the dish incredibly aromatic and rich. This could easily be your next best hangover cure. 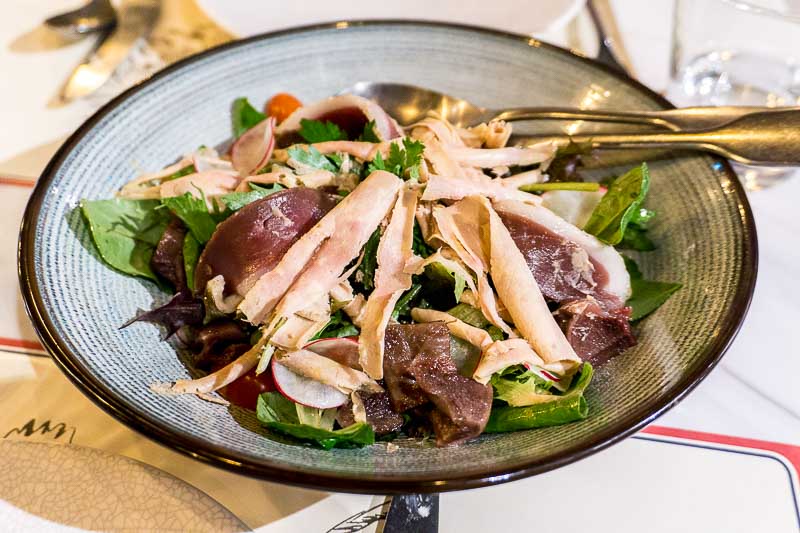 A particular section of the menu at So France caught my eye; one which solely featured duck. As duck is considered a speciality in particular regions of France, an uncommonly seen salad was ordered for the table. 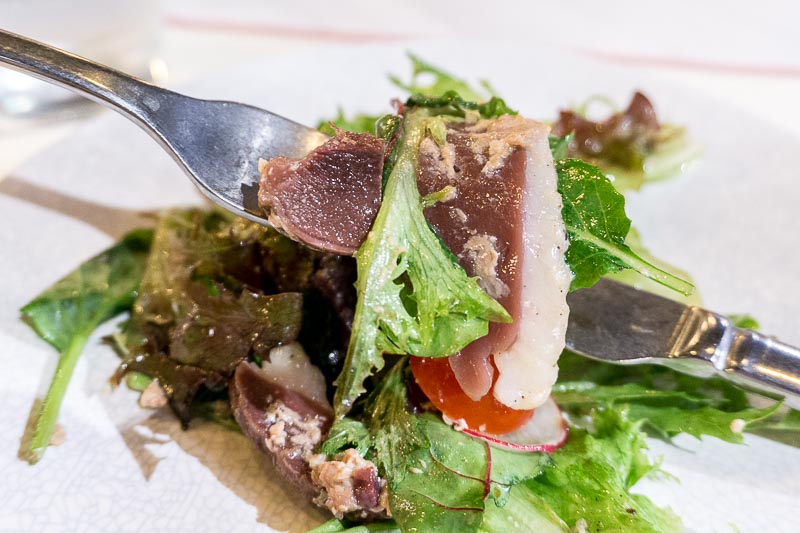 I, for one, have never had the opportunity to taste duck gizzard, and I must say, it was robust and gamey—something that’s better suited for someone who takes to innards well.

That’s not to say it tasted off-putting; the crispy lardons made this savoury salad salty and appetising, and this appetiser was an ideal transition, from appetiser to main course. 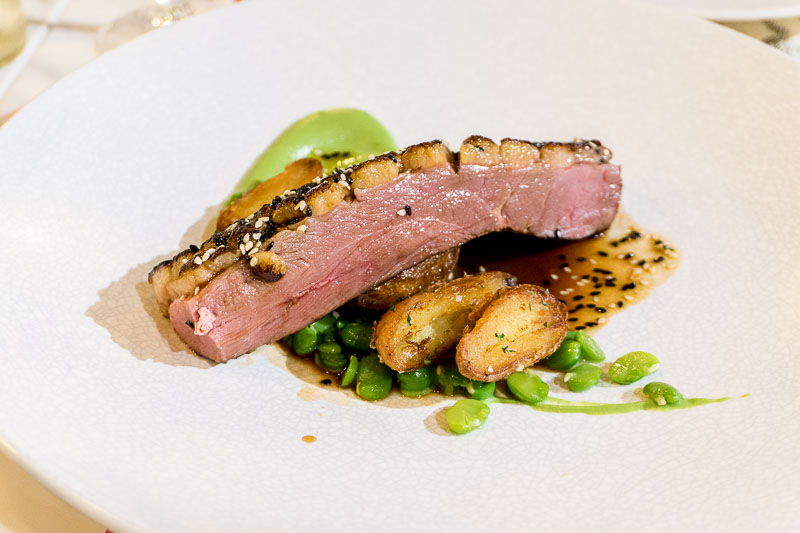 The magic in this dish lay not only in the duck breast, but also those marvellous potatoes. Fun fact: Grenaille potatoes are small, pebble-sized potatoes that are sold separately from larger potatoes as they are known to be difficult to peel. These potatoes have tender flesh that delivers notes of sweetness, and its flesh tends to stay moist and tender while the skin gets crispy. 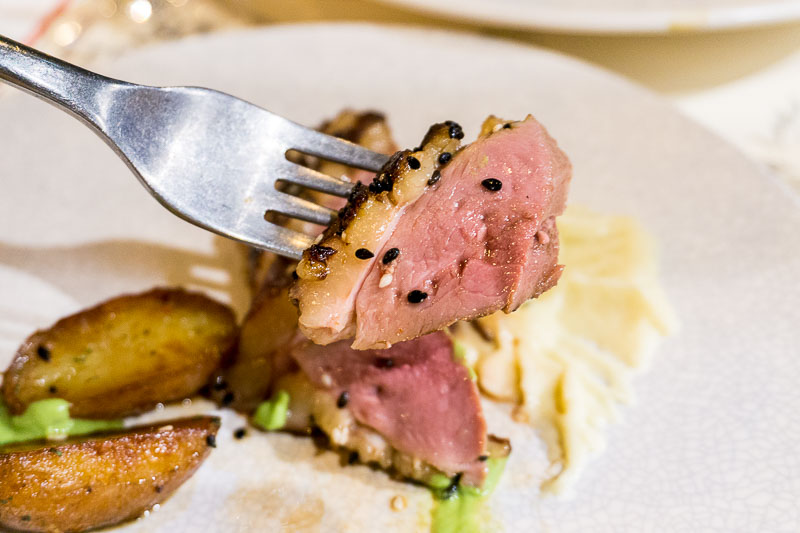 There’s no need to commend the duck breast; it was excellently prepared, and turned out fatty, plump, succulent and proved to be a slice of divine meat to devour.

The gastrique sauce turned up the decadence of the dish with its sweet astringence—an element on the plate which helped to balance the richness of the duck breast. 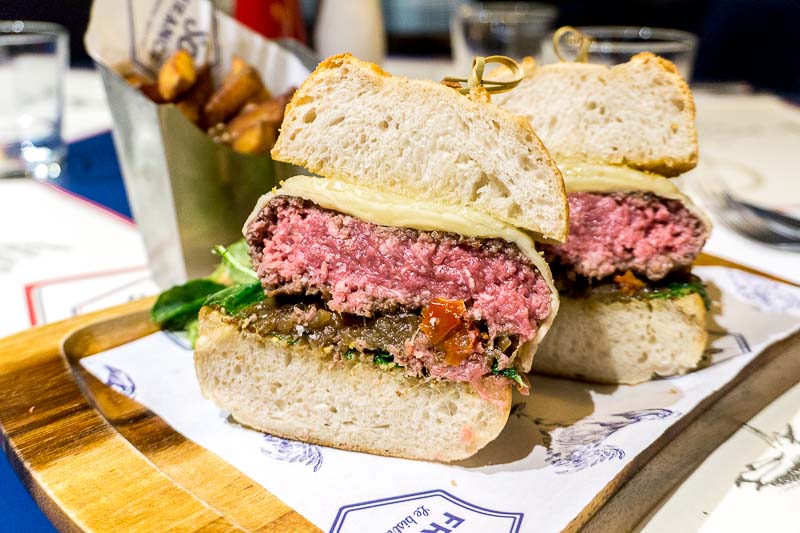 One may not expect to see a burger on a traditional French menu, but here the vibes are casual. What’s the harm in serving a burger? Especially when it’s a So France Beef Burger (S$24++) that incorporates 30% brisket, along with chuck and other cuts in its beef patty.

The burger comes with custom sourdough buns, sundried tomatoes, raclette cheese, rocket, and caramelised onion. Best cooked till medium-rare, the beef patty was amazingly moist, and the buns did a marvellous job of keeping all the juices packed in.

I reckon the best part of this burger was that I still managed to taste almost every element separately, like the sweetness of the caramelised onions, the gooeyness and earthiness of the raclette cheese, the mild tartness of the sundried tomatoes, and the richness of the beef patty. It was an unbeatable combination! 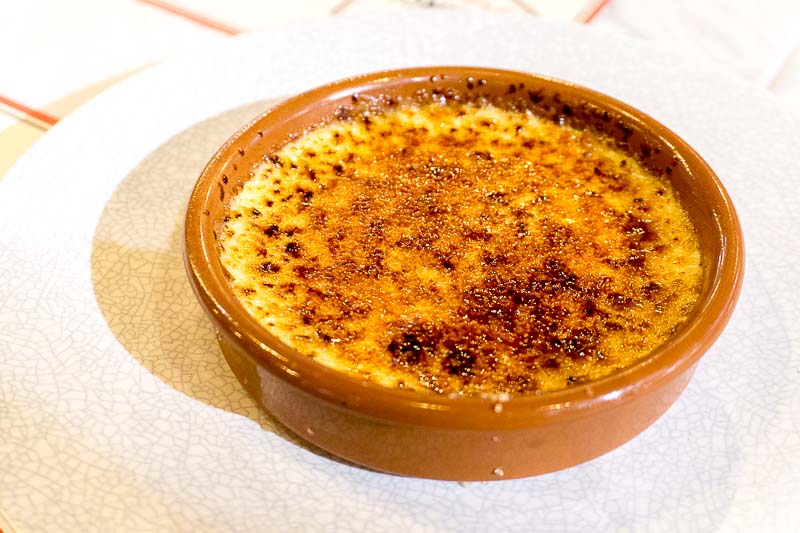 You can’t leave without trying a classic French dessert, like Vanilla Crème Brûlée (S$12++). Made simply with only four ingredients—egg yolk, cream, vanilla, and sugar—it was the best way to end the night. The top crust cracked like delicate eggshells to reveal a smooth curd, which tasted mildly sweet, milky and was aromatic with vanilla.

I didn’t expect to be so immensely wowed by the fare at So France; I cannot wait to rally my friends and return. I love that I now have a new favourite French place that’s conveniently located, and doesn’t exude the stuffiness that’s commonly associated with French dining.

It was fun, casual, and definitely a place you’ll want to bring a fellow foodie or two (or three), as the portions are ideal for sharing.

If there is one dish you absolutely should order when you’re at So France, you won’t regret the Oeufs Meurette.