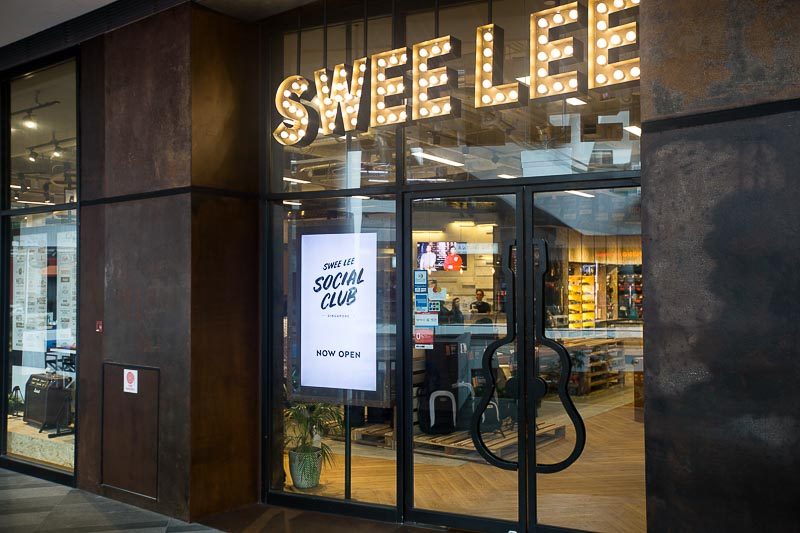 Swee Lee, a homegrown brand that dates back to 1946, has since grown into Asia’s leading online retailer and distributor of musical instruments and pro-audio brands.

And now the company has got music lovers all over the country rejoicing over its newly-refurbished flagship store that opened in late 2017 at Star Vista. It’s quite the retail dream and houses a clothing store, a music store and not to mention, a cafe: Swee Lee Social Club.

The store has a rustic acoustic design, with wood and concrete features running throughout. It was pretty much love at first sight for me; I could just imagine myself chilling there for hours on end, trying out guitar after guitar.

With its expansive area, the store sells guitars, musical instrument accessories, clothes, shoes, bags, and other lifestyle apparel. It even houses five teaching rooms, where aspiring musicians go for lessons.

With the addition of a cafe, I had half the mind to go home and pack my stuff to move in. Even though the cafe bit is quite small, I found it cosy and charmingly quaint. Students hoping for a respite from the usual crowded cafes can try this one on for size! (but of course, don’t be inconsiderate and hog tables during peak hours). 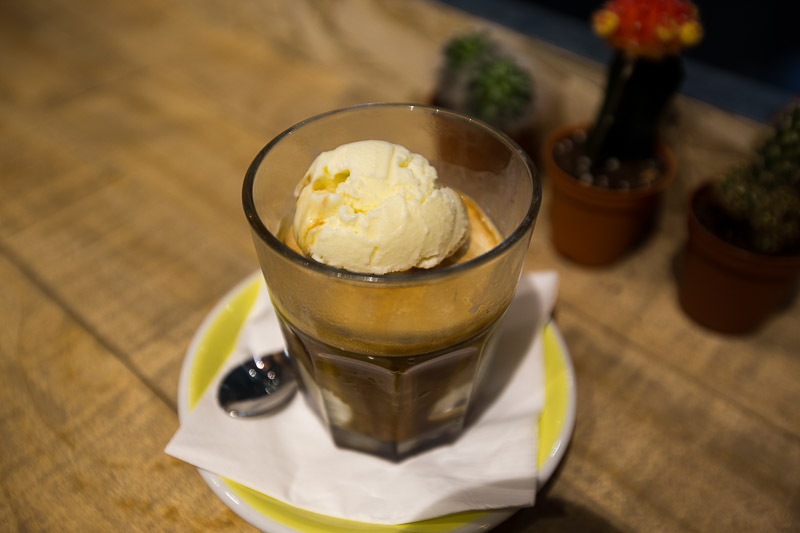 Instead of getting a basic cup of joe at this cafe, I went for a cold cup of Affogato ($7). The coffee was made from a blend of beans roasted by Common Man Coffee Roasters, and boy, was it good.

It was rich from the use of dark chocolate and molasses, plus there was a delicious lingering bitterness to it. Once the vanilla ice cream melted and mixed with the coffee, it became creamier and was pretty much an afternoon treat in itself. 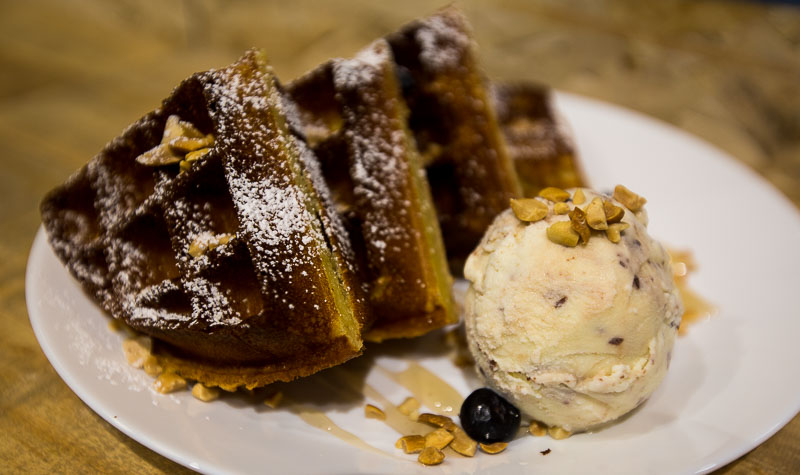 With the sweet coffee leaving me wanting more, I ordered the Waffle & Co ($10) next. It was served sprinkled with icing sugar and drizzled with maple syrup, along with a generous scoop of Nutella ice cream.

FOUR slices of buttermilk waffles plus a scoop of ice cream for only $10, I almost couldn’t believe it. 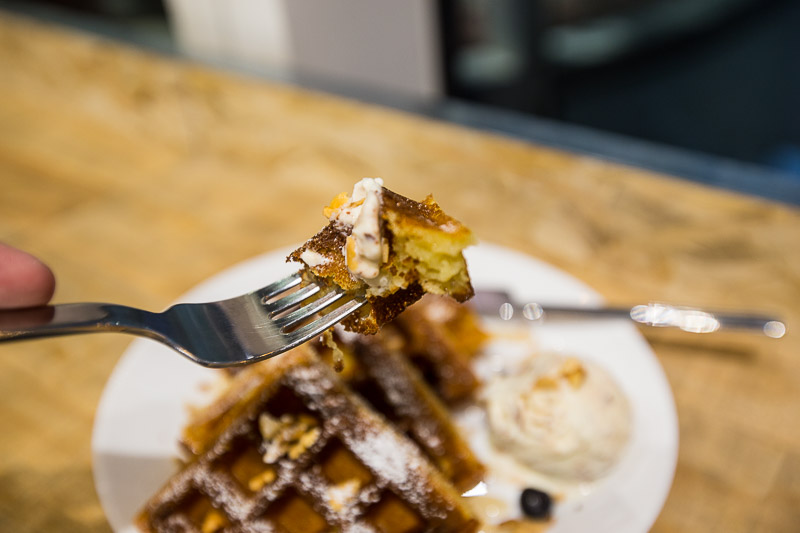 The waffles had a nice crisp exterior and were soft and chewy on the inside. Sweet and moist, they were already a treat on their own but became the stuff of dreams when eaten with the Nutella ice cream.

The ice cream had little bits of walnut that gave each bite an added crunch. I really couldn’t get enough and was glad there was quite a lot to get through. When I ordered the Sweet Toast ($7), I was expecting some toasted bread with a couple of berries or something. But instead, this inviting creation was served.

It looks more akin to a cake, doesn’t it? Sourdough bread with banana slices tucked between a thick luscious honey yoghurt mixture along with a coat of muesli – it looked almost too good to eat.

I first tore a bite-sized piece of the Sourdough bread and tried it without the spread. It had a nice crunch like good toast should, and true to its name, had a distinct sour taste to it. I was glad that quite a hearty amount of toppings was given, as no one wants to be left chomping on bare toast. The combination of the bananas, muesli, yoghurt and berries was delicious, with pleasant textural contrasts.

I’m sad to say though that stacking sweet on sour didn’t quite do it for me. I would have much preferred the spread on normal toast, but maybe that’s just me. 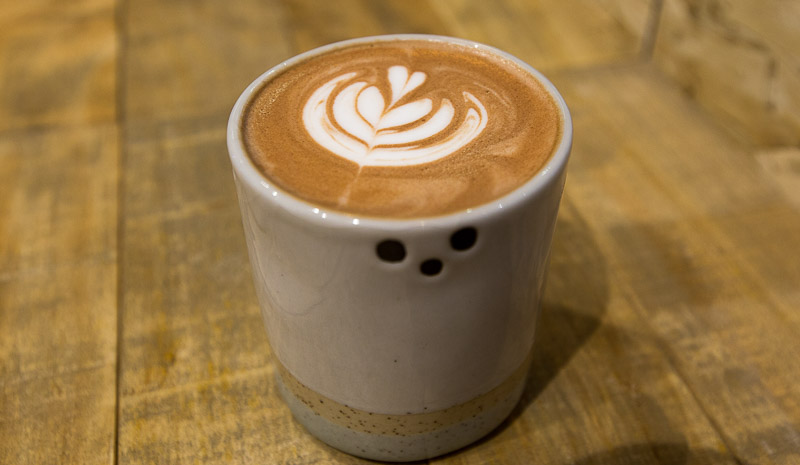 Because I pretty much downed that first cup of coffee, I ordered a warm cup of Hot Chocolate ($6). For $6, the size of it was a little disappointing; it was served in a Japanese porcelain cup.

Fossa 72% Dark Chocolate was used, making the Hot Chocolate less creamy than what I’m normally used to. It was of a thinner consistency, with a hint of a peanut taste to it.

It also had an oddly familiar acidity similar to that of a latte. I really enjoyed this version, as it was a unique change to normal hot chocolate that can get quite cloying after a couple of sips. I just wished there was more!

Swee Lee Social Club serves up pretty decent sweet treats, plus the overall ambience of the place was absolutely magnetic. I thoroughly enjoyed the Waffle & Co and will definitely be coming back for it in the near future.

So when you’re there trying out musical instruments or attending lessons, stop by Swee Lee Social Club for an afternoon snack and some coffee!

Previous articleDine At Manhattan Fish Market For Under S$10 Per Person This February 2018
Next articleKazo: This Taiwanese Bakery In ChinaTown Point Is Giving Us More Cream Puff & Cheese Tart Options