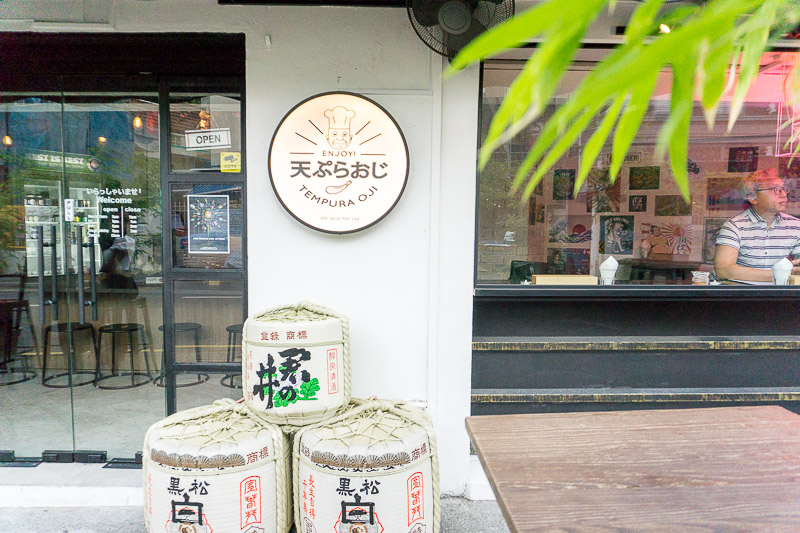 Walk past the row of shophouses along Keong Saik Road, and it can be a visual smear of bars, restaurants, coffee shops and even louder chaos of smells and sounds. But right at the head of the street (or the end, depending on which say you’re coming from), is a quaint restaurant and bar that hides a secret. 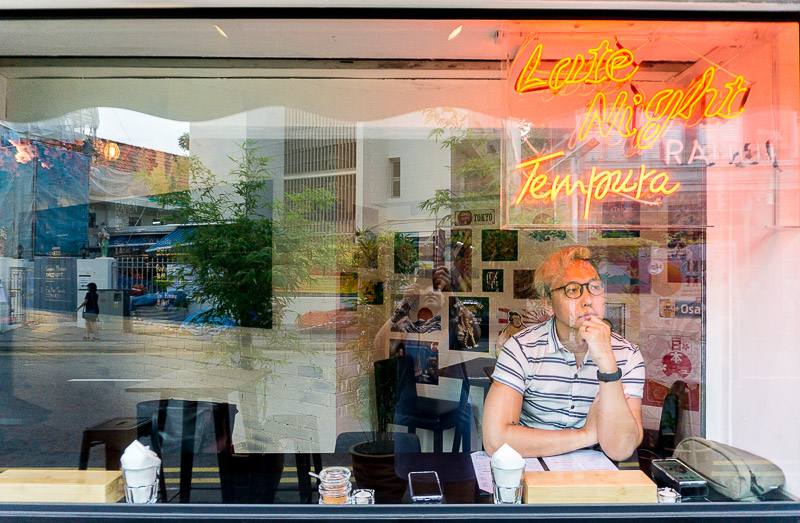 To your right, as you enter Tempura Oji, is what they dub ‘date night corner’, and it’s an apt title for a nook in the bar which looks out to curious peers from the street. It’s also a great place for a solo soul to have a hot meal and a solid drink, all while watching the world go by. 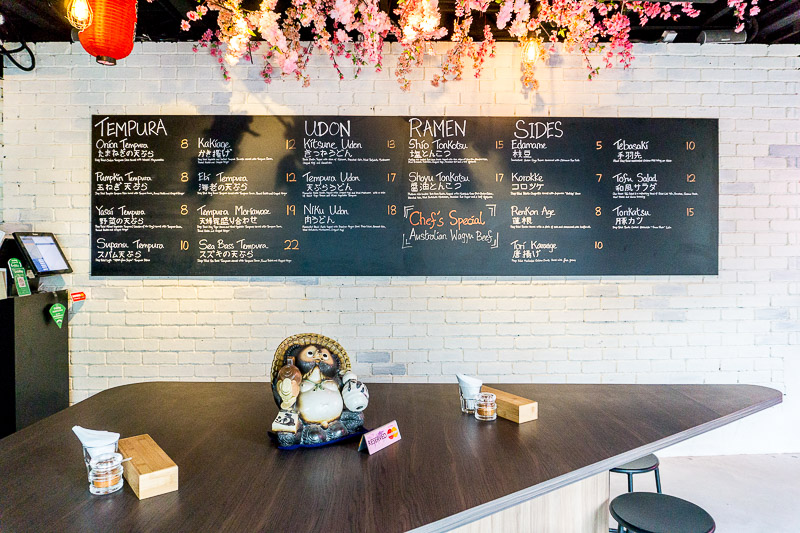 Front and centre is their food menu, which I’m sure—just like I was—will make you want to grab a seat instantly and peruse the menu. 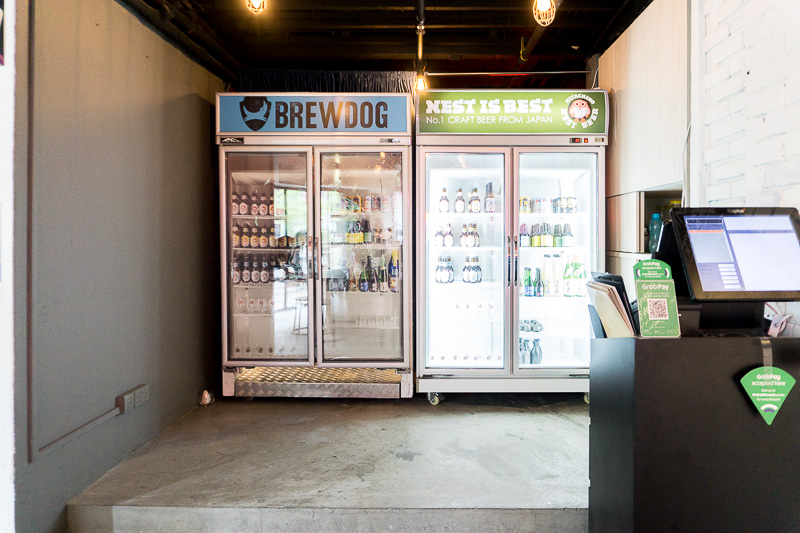 To the far left, is a seemingly normal sight; a double fridge which stores chilled craft beers. But this is where the magic lies, as the “fridge” with the ‘Brewdog’ sign above is, in fact, an entrance to a hidden bar, Brown Sugar. 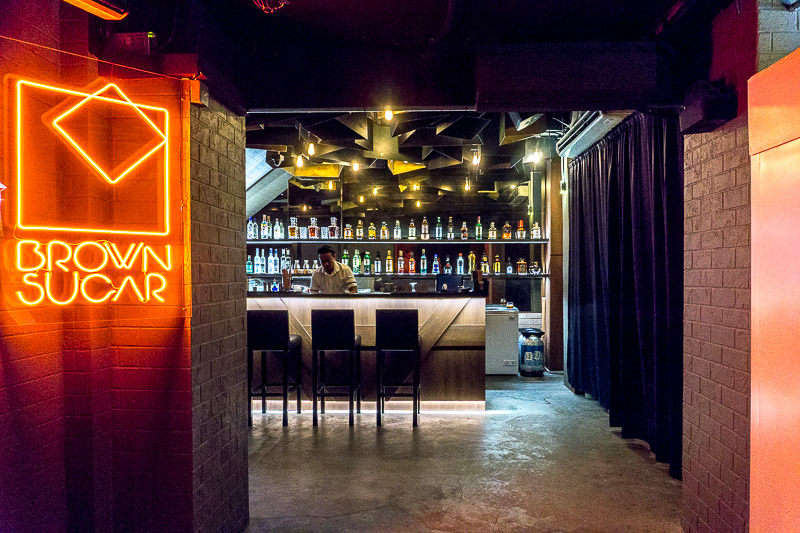 Brown Sugar has DJs helming the deck from 10pm till late, with curated cocktails and an array of craft beers. There are also weekly offers like ‘Violet Hour’ from 5pm – 8pm from Monday to Friday, and 6pm – 9pm on Saturdays and eve of public holidays which offers S$10nett selected craft beers and S$15nett for Violet Hour’s signature cocktail. 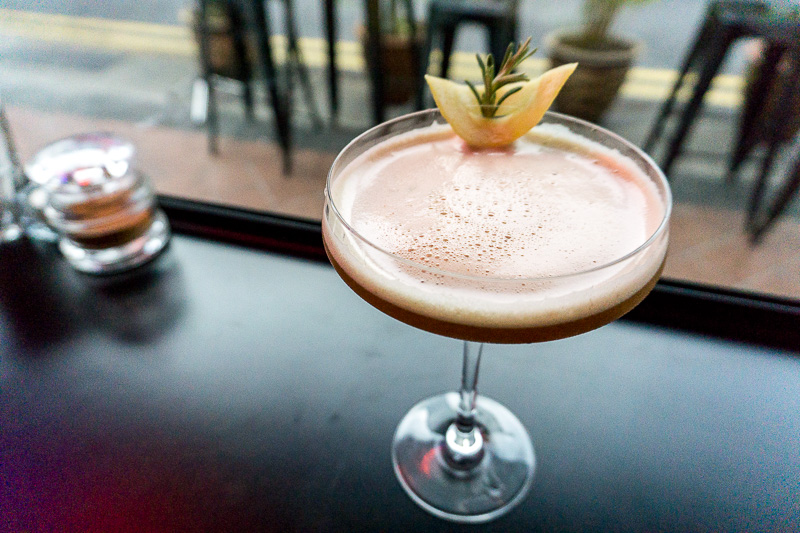 One of their most recommended cocktails is their namesake tipple, Brown Sugar (S$24). Made with Russell Reserve, 1757 Cinzano Rosso, brown sugar, freshly-grated cinnamon, fresh thyme, freshly pressed lemon, and egg white, it had a spicy cinnamon kick at first sip. The lemon lent it a citrus zing that lingered, but I must say, I was surprised it wasn’t cloyingly sweet.

Overall, it was a balanced drink that had favourable sweet and sour notes. Another recommended creation was The Blind Pig (S$24). Created with a concoction of Roku gin, homemade beetroot marmalade, gula melaka, pressed apple and lemon, fresh rosemary, and their signature candied bacon, this was certainly a savoury choice.

It’s a very different experience drinking it with and without chewing on the bacon first, with the latter method resulting in a drink that was rather plain, and similar in profile to light cough syrup. Enjoying the drink with the candied bacon gave deeper, smokier hints to the drink, which resulted in a more complex recipe. 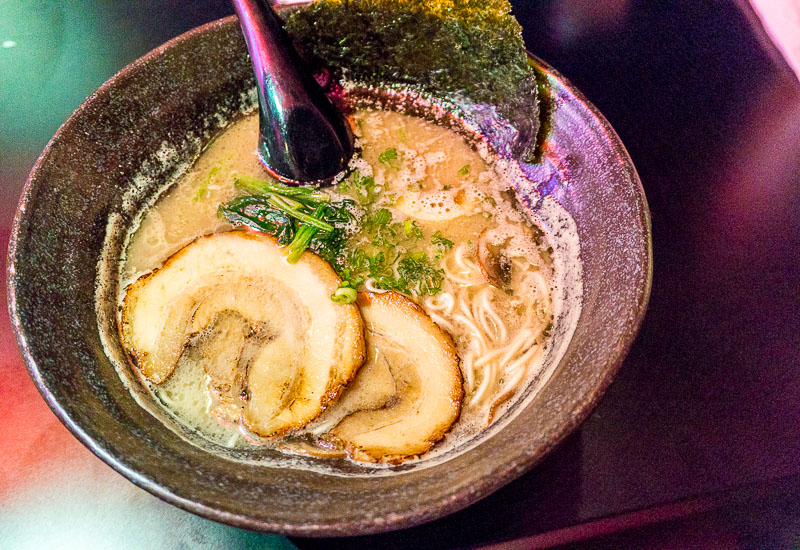 Their food is just as appealing as their drinks, with attractive price points, like the Shio Tonkotsu Ramen (S$15). It has a medium-body pork bone broth, where thin slices of char siew waded along with blanched kale, diced portobello mushrooms, shredded nori, and half an ajitama (seasoned ramen egg). The broth was rich and aptly thick, with an emollient mouthfeel with every sip. The noodles had decent resistance when chewed, while the char siew slices had a satisfying amount of fat to keep me coming back for more. 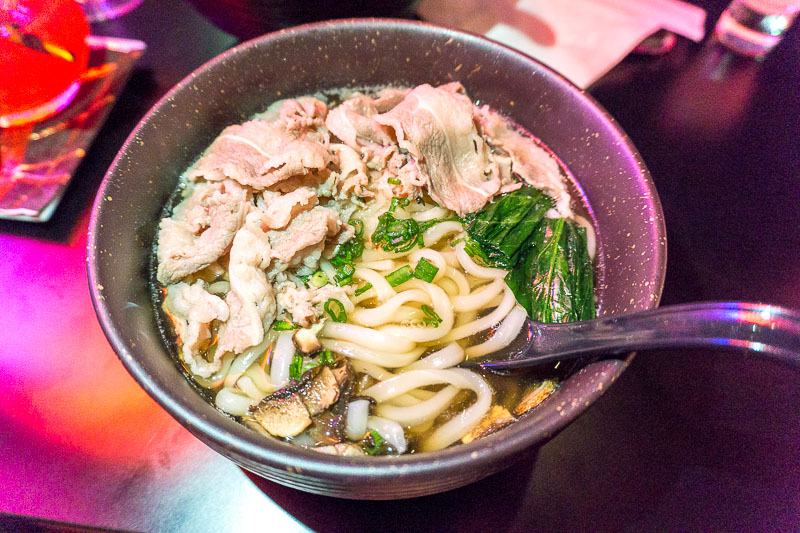 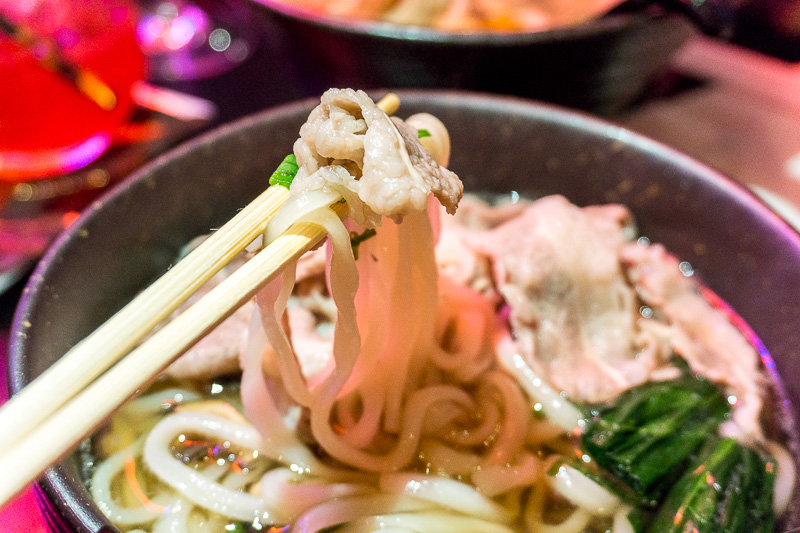 Some beef udon bowls I’ve had fail simply because their broth was either too salty or not meaty enough.

This one hit the nail on the head with regards to flavour, and I was furiously (and happily) slurping every strand of udon. The thick noodles weren’t overcooked till mushy, and the beef slices were impressively thin. All the ingredients really created an earthy and comforting bowl that’s worthy of a return visit. 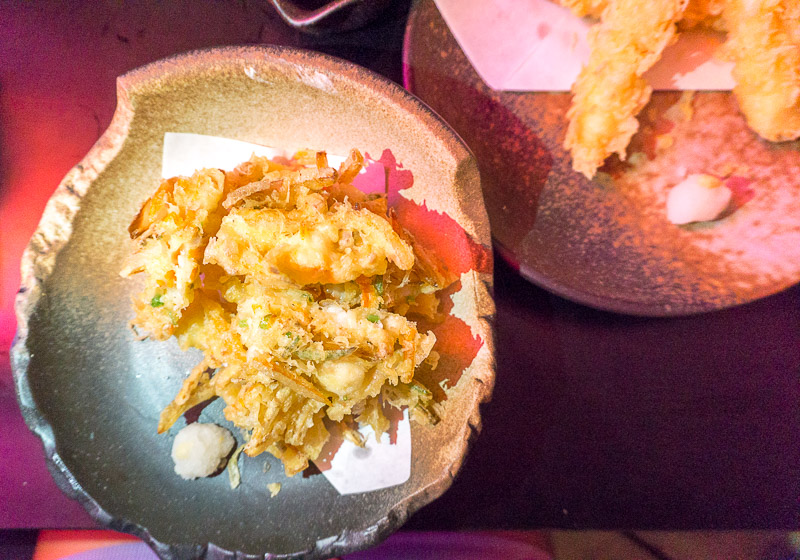 I can’t rave enough about their tempura, starting from the Yasai Tempura (S$8). A daily assortment of deep-fried vegetables arrived at my table and my instinct was to immediately have a bite. I wanted to relish the inexplicable crunch and sweetness of the fresh vegetables, and boy, was I satisfied.

The batter was incredibly crisp that I had to take small bites to avoid injuring my mouth from its sharp edges—I suppose that’s a good indication of a freshly-fried food. 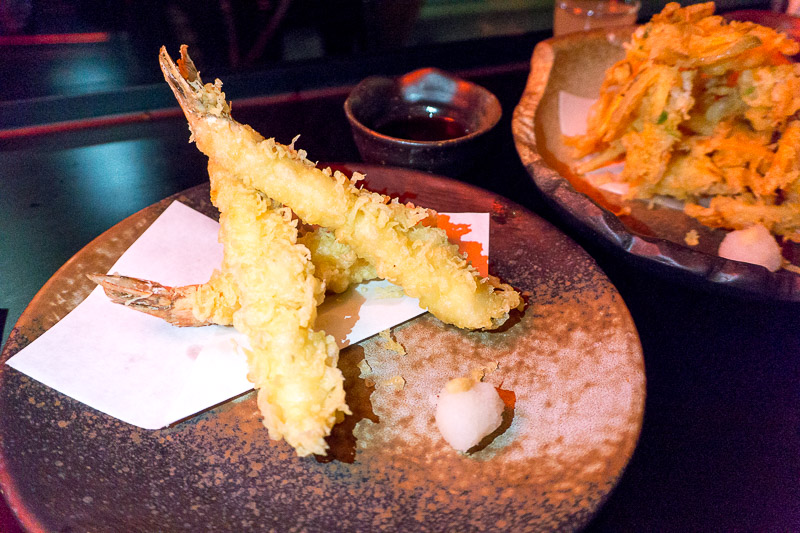 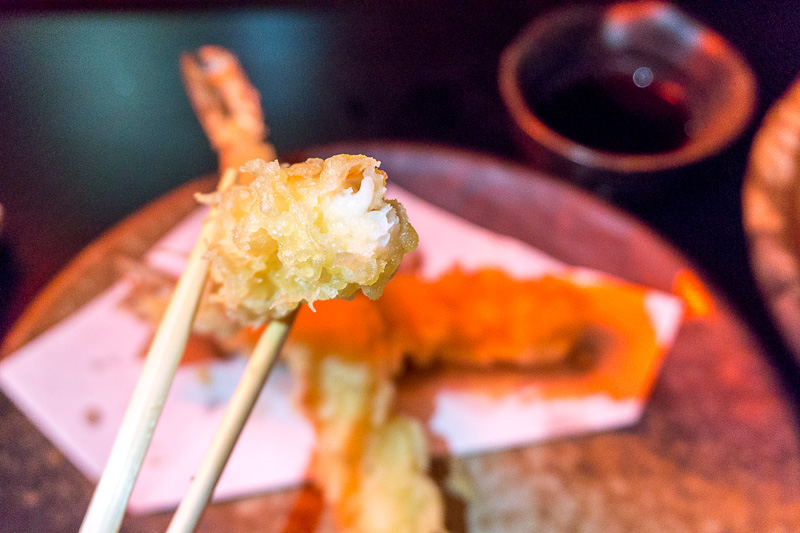 Even their Tempura Moriawase (S$19) was a stellar choice, as it wasn’t remotely greasy (something I really detest), and the king tiger prawns tasted ocean-fresh. The disparity between crunchy batter and QQ prawn was gratifying. I wish I’d ordered another portion, but was sadly too satiated by that point.

The unmissable neon signs of Tempura Oji in the evening will undoubtedly draw you to this place like moths to a flame, and you’ll want to step inside and quickly make this your next favourite after-work hangout.

It’s has great food, attractive weekly deals for drinks, and music that goes on late into the night—what more could you ask for from the new kid on Keong Saik’s block?