Eighteen Chefs has grown into a well-known name in the Singapore food scene. Famed for affordable western cuisine, they’ve branched out to open The MeatHöuse. Located in the refurbished Century Square Mall in Tampines, news of The MeatHöuse’s opening definitely piqued our interest. Unlike most atas steakhouses with interiors that resemble those of bars, The MeatHöuse features a brightly lit interior. Stay away from the booth-seats as the lights there tend to be more blinding. 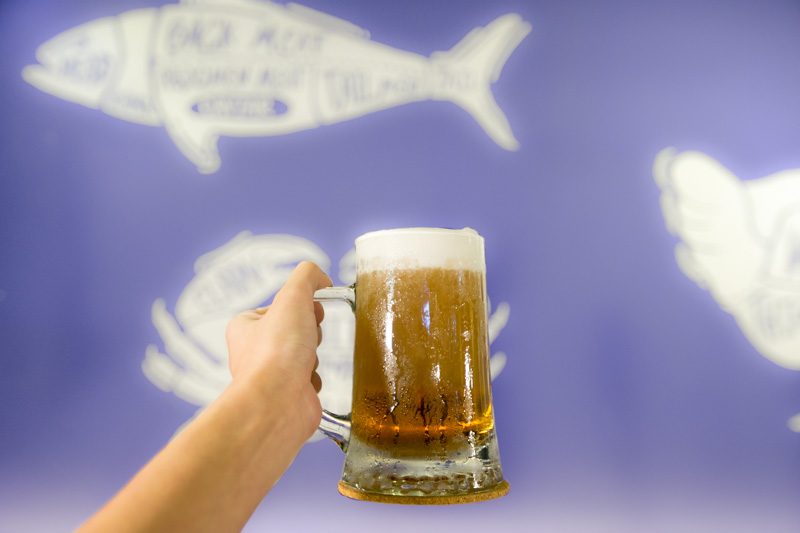 The walk in the sun from Tampines MRT to Century Square made us crave a cold drink, and the Butter B (S$8.80) was the perfect solution.

It tasted like a classic root beer float, except the ice cream was replaced with a sweet cream foam, which made the drink less jelak as the foam reduced the usual creaminess I dislike in root beer floats. 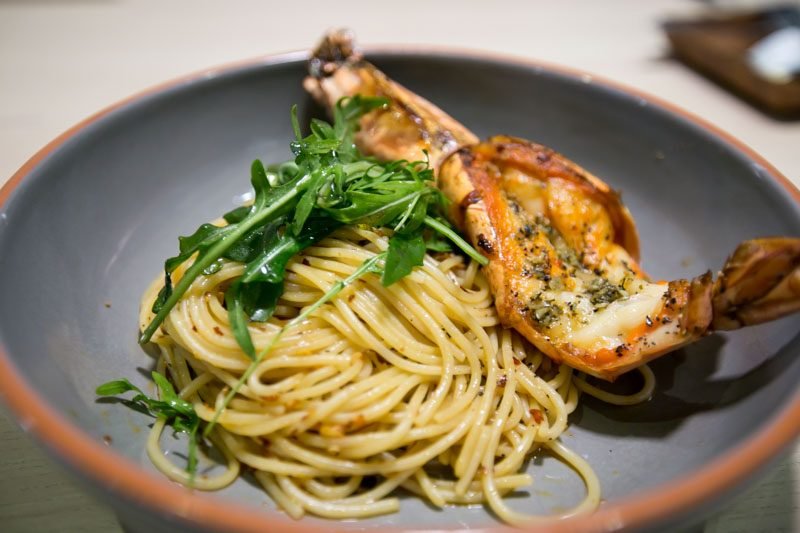 We tried the Grilled Wild Caught Giant Tiger Prawns Pasta with Prawn-infused Oil (S$18). Visually, we were rather disappointed as there was only one prawn on the plate, while the menu promised prawns. 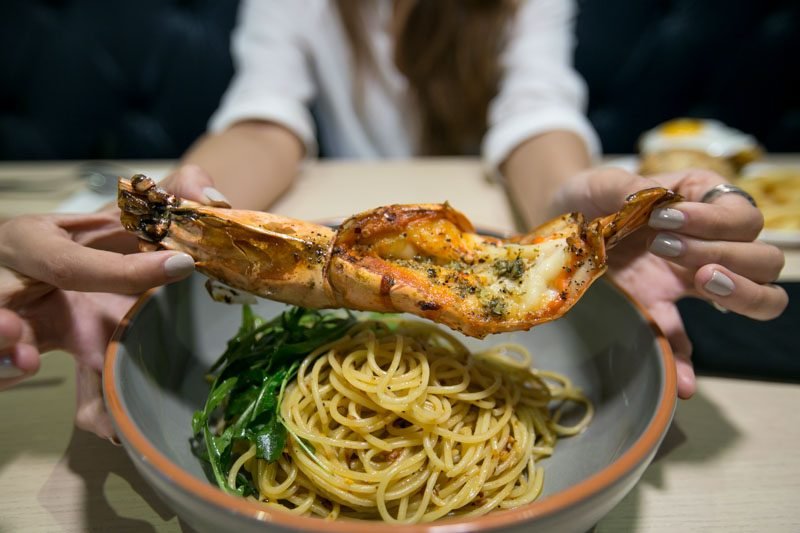 But quantity aside, the prawn was huge, lightly seasoned with salt and various herbs.

For an establishment that boasts its expertise in cooking meats, I wasn’t expecting much from this dish, but I was surprised at how well the grilled prawn retained its moisture and succulence. 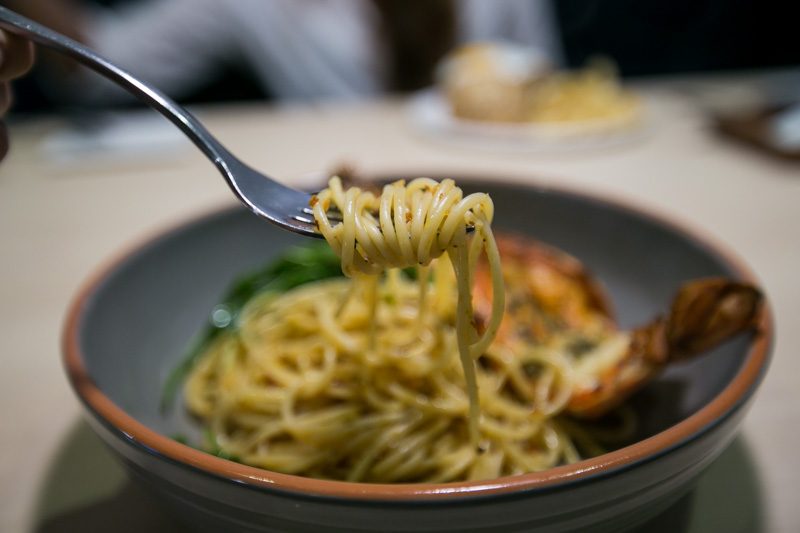 Served alongside perfectly al dente pasta that has been coated in prawn-infused oil, the overall dish sure lived up to its name of “prawn pasta”. 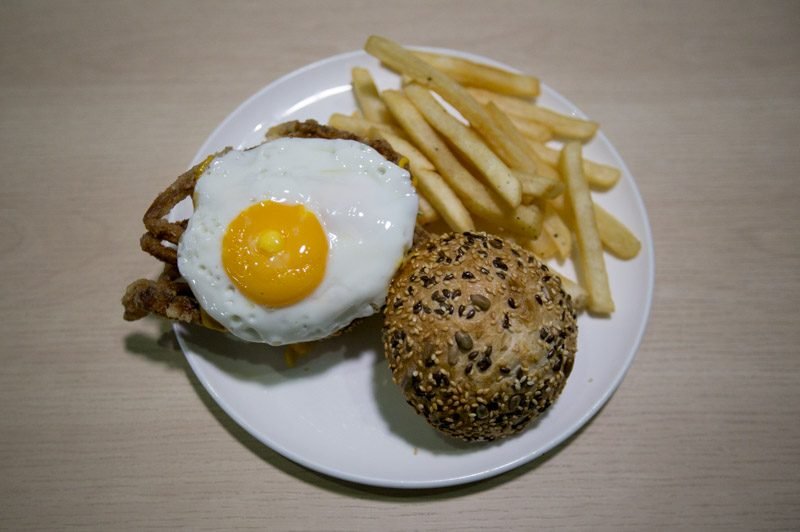 The prawn pasta set the standards high for the dishes to follow and the Soft Shell Crab Burger (S$14) lived up to the expectations we had. 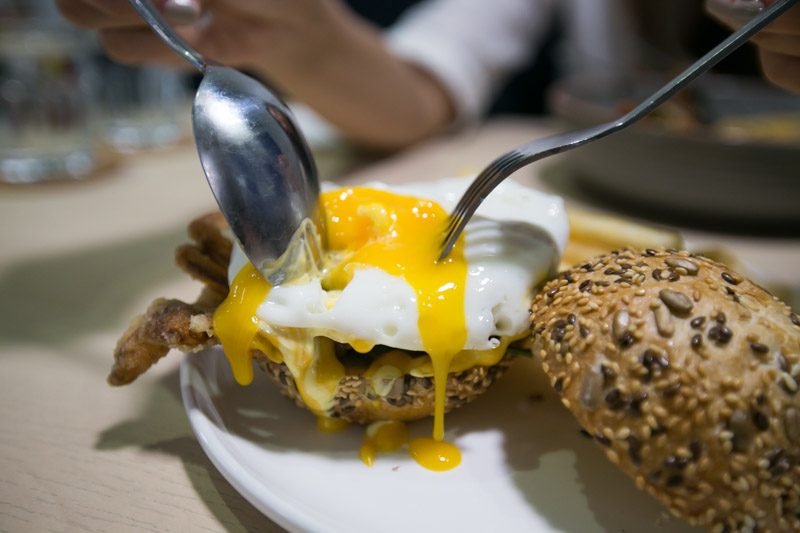 A piece of crispy, deep-fried soft shell crab was topped with a perfectly cooked sunny-side up egg and sandwiched between lightly toasted multigrain buns. 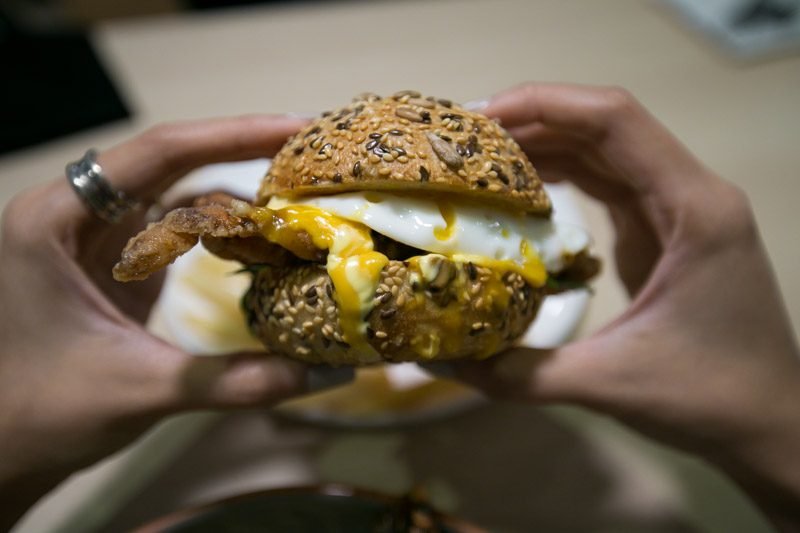 The burger had a myriad of flavours and textures: crisp and fragrant from the soft shell crab, soft and fluffy from the buns, and creamy from the egg yolk. Every bite left me craving for more, and that’s coming from a girl who rarely eats burgers, even at famed burger joints.

Seafood aside, we were here to satisfy our inner carnivore and was excited for the meat dishes to come. 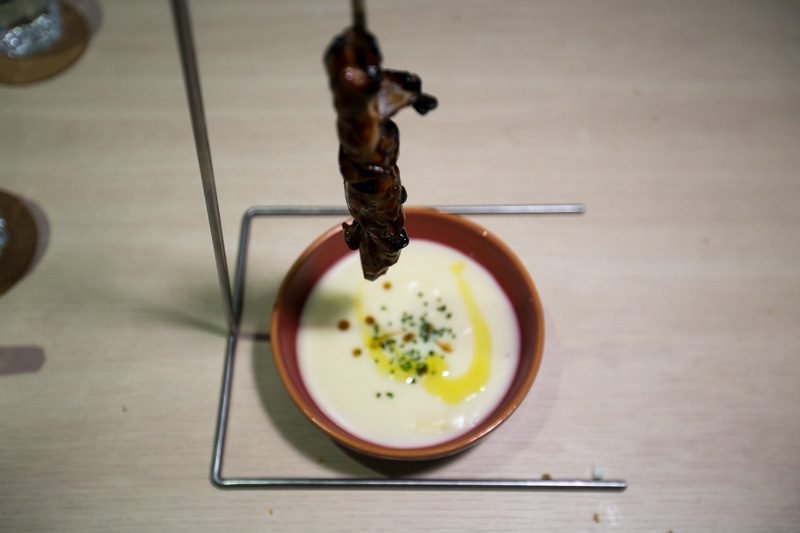 The Meat and Mash (S$14) consists of chicken thigh on a skewer, served with homemade creamy mashed potato.

The chicken was too sweet for my liking and a tad dry, but that was the least of our problems with this dish. 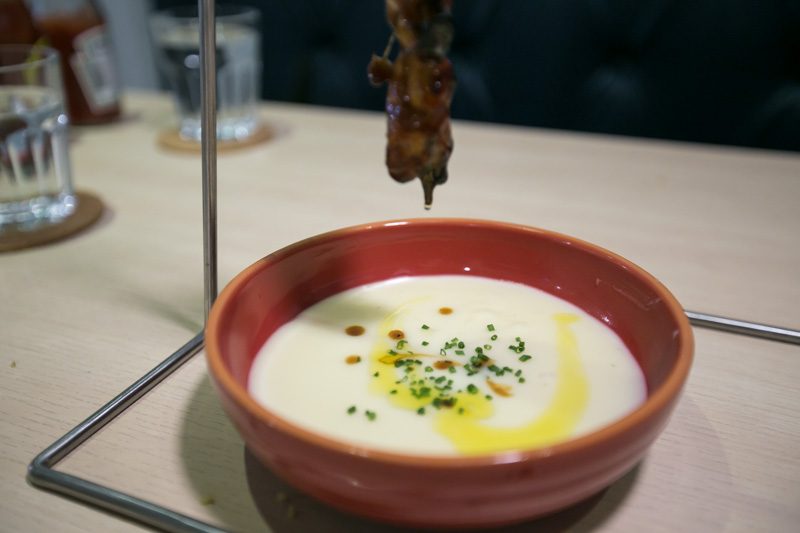 The mashed potato was lumpy and the consistency reminded me more of a chowder than mash. Light on flavour and a texture that didn’t quite match that of the usual mashed potatoes, I’ll easily give this a miss.

We weren’t about to let one bad dish affect our impression of The MeatHöuse, especially after the successful seafood dishes we’d had prior to the meat and mash. 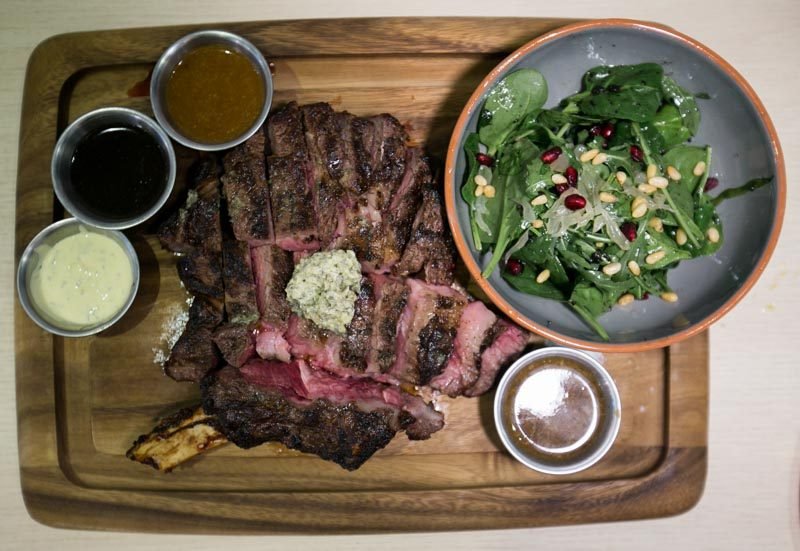 The OP Ribs (S$10/100g) was of standards we’d expect from a local steakhouse (minus the fanciful plating and exorbitant prices, of course).

It came on a platter that made our jaws drop when the staff walked towards our table. For just two girls, we knew we wouldn’t be able to finish it.

We later learnt that this slab of meat is usually served in portions ranging from 1-1.5kg. So don’t even think about finishing this on your own. We’d recommend getting this as a sharing platter for four to five people instead! 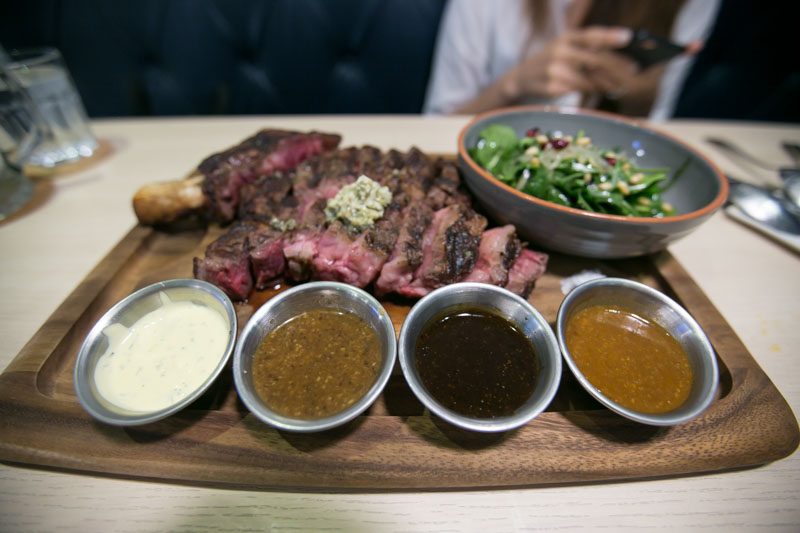 We tried all four sauces, (left to right) béarnaise, mushroom, black pepper and garlic sauce. In the end, I still went back to the classic pairing of beef with mushroom sauce (it’s a classic for a reason, right?). The beef itself was cooked a perfect medium rare — charred on the outside, but juicy and pink on the inside.

I devoured way more than my stomach had space for, but it was that addictive. Ironically, I enjoyed the fatty bits that melted in my mouth more than the steak itself. 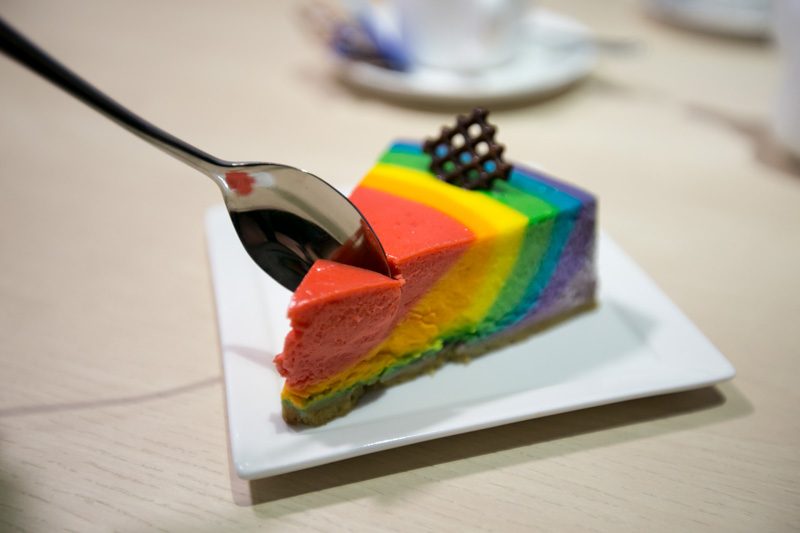 After all the heavy mains, our attention was diverted to the dessert menu. Limited, to say the least, with merely two flavoured sorbets, three gelatos (although it’s all homemade) and four cakes.

We tried the Rainbow Cheesecake (S$7) and felt that the strong citrus flavour overpowered the cheese base and tasted more like an orange cream cake. But for S$7, I guess you’re paying for the aesthetics or for the ‘grams.

The MeatHöuse serves up delicious mains that are definitely value-for-money. Having recently gotten its halal certification, it’s a place I’ll recommend friends to patronise should they be looking for somewhere to catch-up with friends over a meal in the East.