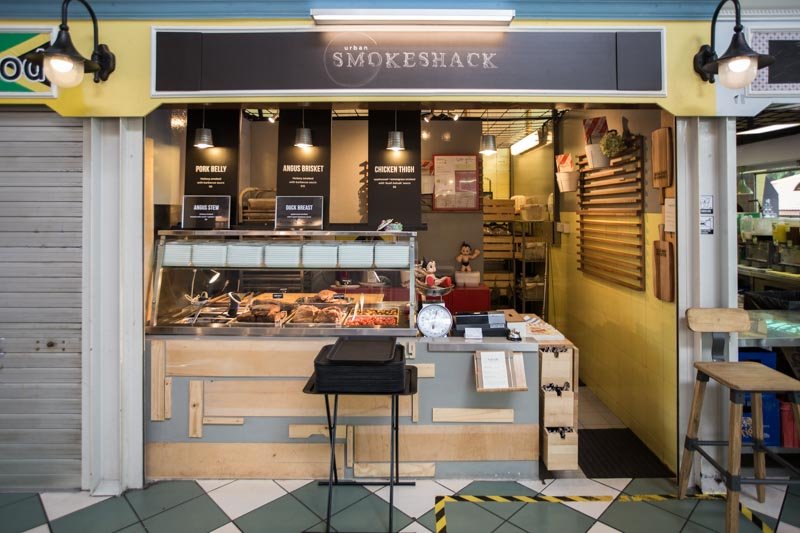 *Do note that Urban Smokeshack has since moved to Ayer Rajah.

I was walking around The Bedok Marketplace one evening when I chanced upon Urban Smokeshack, which serves up smoked meats that looked absolutely appetising and mouth-watering. I knew I had to give this place a try. 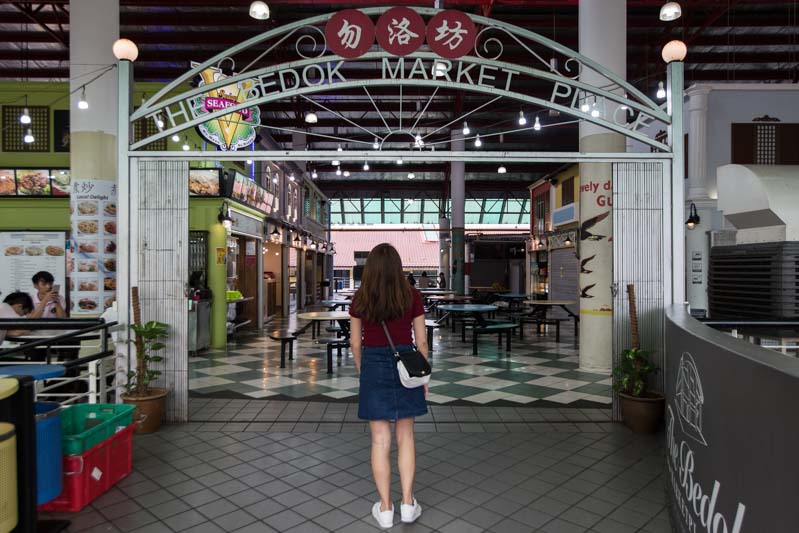 The Bedok Marketplace exudes the feeling of a more up-market kopitiam, with stalls serving dishes such as ramen, pasta, and of course, smoked meats. Urban Smokeshack has a total of two stalls within the marketplace, with one store selling smoked meats while the other smoked sausages. 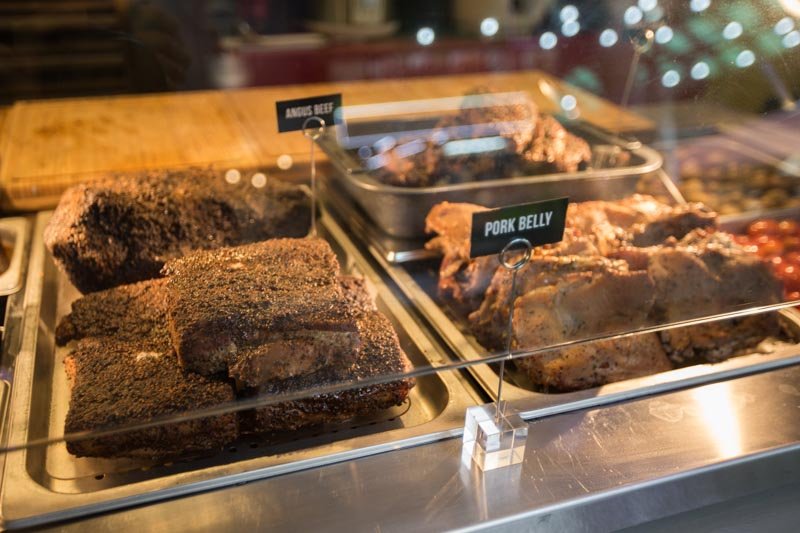 The meats and sausages were resting on trays behind the glass display as if beckoning customers to take a closer look. We were almost salivating while looking at them! 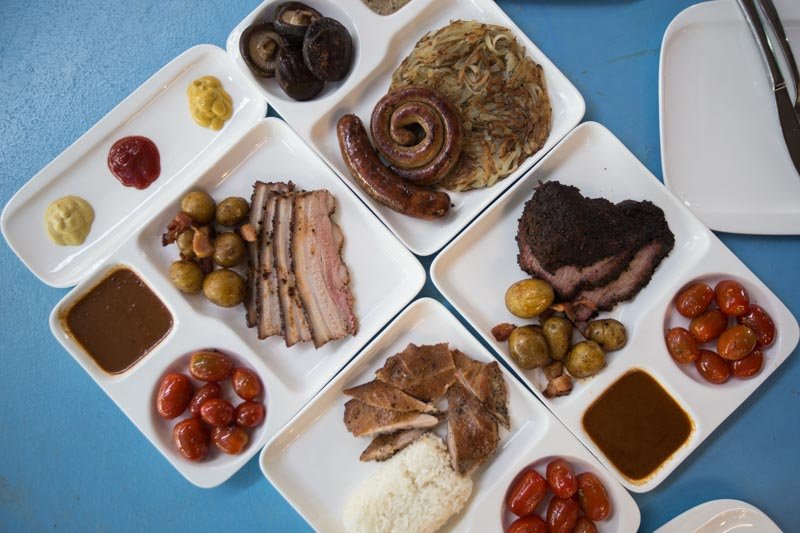 We ordered a variety of meats and sausages to share. Most dishe come with sides such as the grilled cherry tomatoes, and the baby potatoes with bacon. First up, we had the Angus Brisket ($18), which was hickory smoked and served with barbecue sauce. As the first customers of that night, we had the end cut of the brisket, which was more charred, and had more flavour as it was where the rub was concentrated.

The brisket is smoked for a total of nine hours before it is ready to be served. And true enough, we could taste the smokiness of the beef. The meat was a little too lean for my liking and slightly tough, but it was still a good plate of brisket. I would recommend this for sharing between a few people. 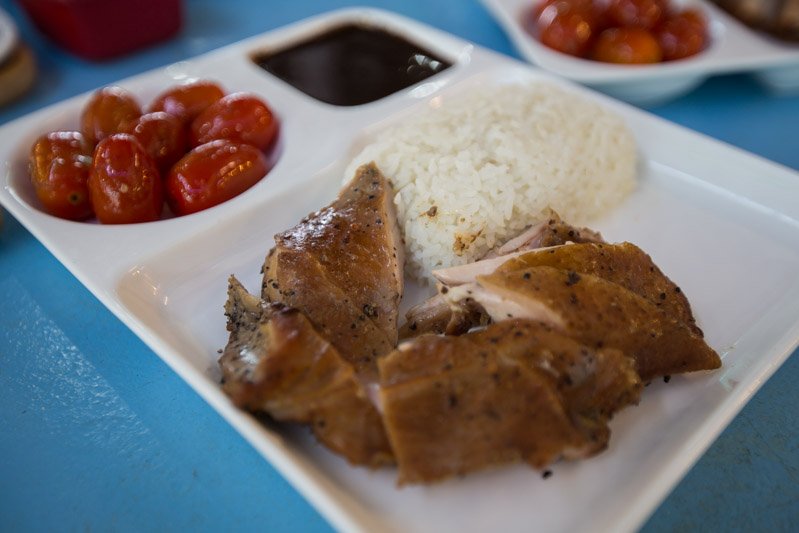 Our second dish was the Chicken Thigh ($6) that was applewood and lemongrass smoked, served with homemade buah keluak sauce. Accompanied with lemongrass-flavoured rice. This plate is definitely a steal as it is very affordably priced.

The chicken was very tender, moist and well-seasoned with Asian spices. The homemade sauce also had a smokey flavour to it, along with some nutty notes. I would order this again in a heartbeat! Next up was the Pork Belly ($8), also hickory smoked and served with barbecue sauce. Smoked for two hours at a low temperature, I had high expectations for it — but I was slightly disappointed as it was slightly chewy and dry. Nonetheless, I loved the rub on the skin, which was slightly spicy and gave a kick. The Duck Breast ($16) was applewood smoked and served with five-spice barbecue sauce. The duck came in an incredibly generous portion, and again, this plate would be great for sharing. The dry rub here tasted similar to that on the pork belly, except slightly sweeter.

Oh, and those baby potatoes and cherry tomatoes? I enjoyed them in between bites of meat, refreshing the palate every now and then. We also tried two of the sausages from the other stall, Moroccan Lamb ($11, front) and Pork Cumberland ($10, back). The smoked sausages were served with rosti (which I loved!), mushroom gravy and shiitake mushrooms. I preferred the lamb as it was chewier and had a stronger flavour.

If you find yourselves at Simpang Bedok, do head up to The Bedok Marketplace for more food options to explore, such as the smoked meats and sausages at Urban Smokeshack. You definitely won’t miss this stall, with its snaking queue during dinnertime!

Previous articleSingapore Craft Beer Week: Indulge In Endless Beer & Food Around The Island From 20 – 27 Aug ’17
Next articleAh 2 Soup: Herbal Ginseng Soup With Half A Black Chicken For Only S$5.50 At ABC Brickworks Food Centre Deserving Of Its Bib Gourmand Award 2017