Stevens Road has seen some sprucing of late, with the welcome of Mercure Singapore On Stevens, set to inject some life and flavour into the fringes of Orchard Road.

One of the latest F&B establishments that is set to be the next talk of the town is Winestone, a Mediterranean restaurant with a strong focus on its wine collection, which is also available for retail purchase. 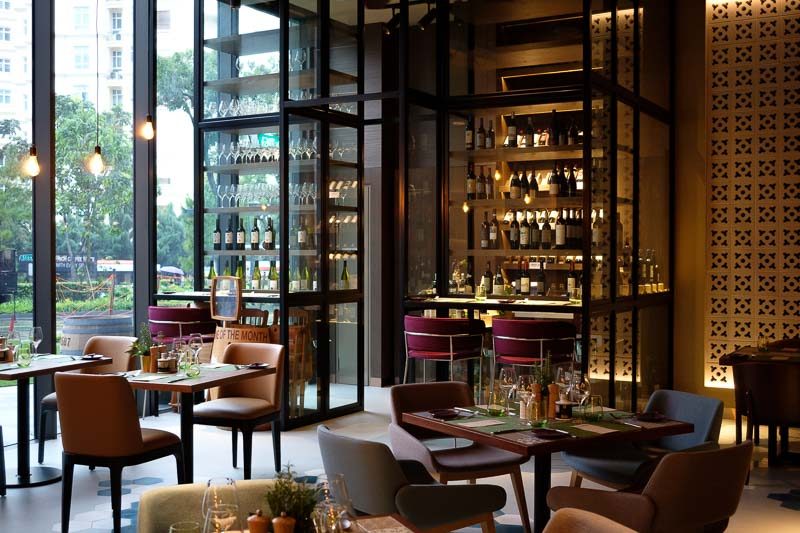 Winestone’s dining area is flooded with plenty of natural light as well as ambient lighting, that’ll set the tone for both intimate dinners, business gatherings and group catch-ups. 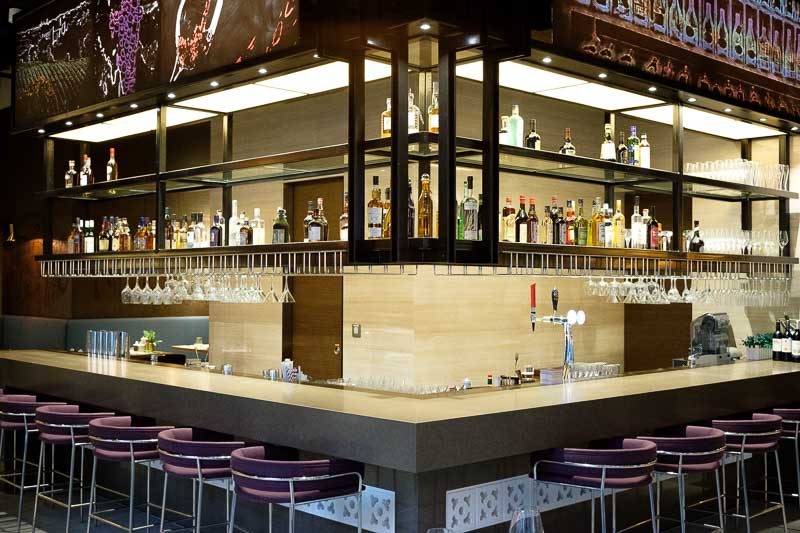 If you’re looking to seat yourself at a more casual area, the bar is the prime location to have a tipple or two while making light banter with their bar staff. Winestone encourages its patrons to wine down (quite literally) and take their time to savour the food and drinks offered, which is how they came up with the Winestone Express Platter For 1 ($22), meant to enjoy while waiting for that one friend who’s always running a little late.

It comes with a selection of cheeses (Brie de Meaux and Tomme de Savoie Fermière), cold cuts (Jamon Iberico de Cebo and Spanish Chorizo), focaccia bread (made in-house!) as well as a glass of house pour red or white wine. If you’re simply popping by for a quick drink, this platter is well worth considering. 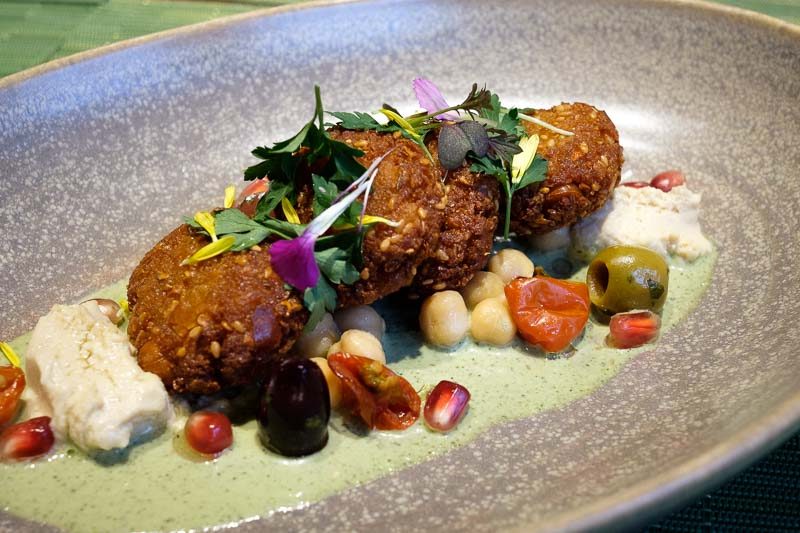 The Falafel ($14) here is a must-try, being one of chef’s highly recommended dishes. I’ve tried falafels in a Greek restaurant before, and I suppose it’s the reason why I’ve never tried them ever since; the ones I had back then were really dry and bland, a complete appetite killer.

These smaller pucks were flavourful and were only made more mouthwatering with the hummus and mint yogurt that accompanied it. 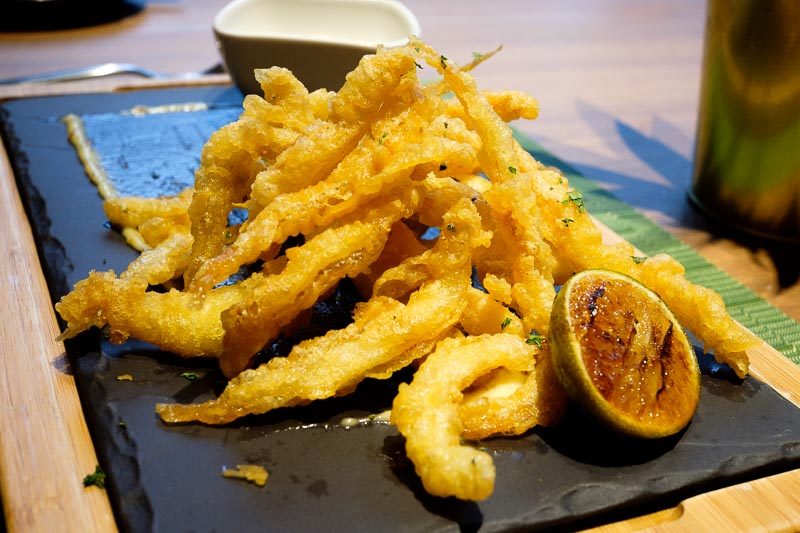 I love a good fried whitebait starter, so I had high hopes for the Battered-fried Whitebait ($12). They were unbelievably crunchy with just a hint of saltiness. The garlic aioli dip was quite addictive; it had me popping the whitebait like popcorn. 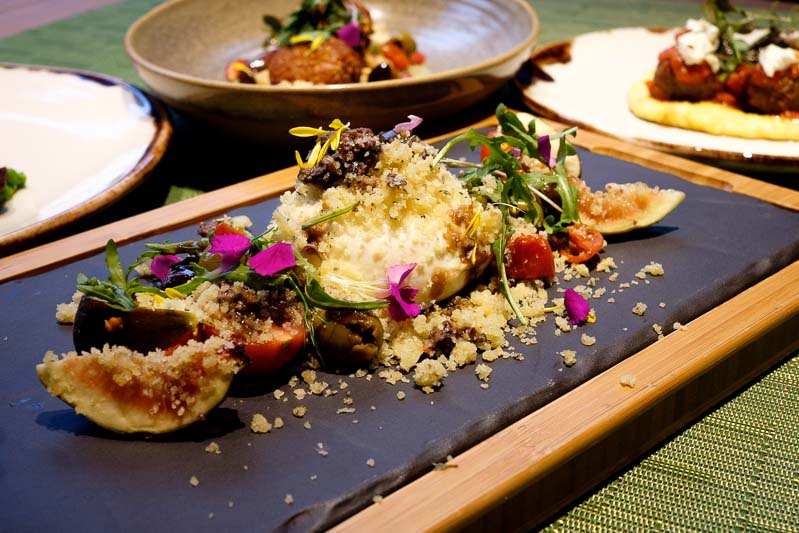 Their salads are dressed to the nines, as exemplified in this Fig & Olive Burrata Salad ($28). It comes with semi-dried tomatoes, rocket, basil and balsamic dressing. The burrata was smooth and creamy, perfect for spreading on warm toast, and well-balanced with the sweetness of the figs and acidity of the sun-dried tomatoes. Looking for a heartier starter? Then the Ricotta Veal And Meatballs ($14) with soft polenta and pomodoro sauce will fill up your belly quicker. Despite their miniature size, these little meatballs were packed with flavour and actually quite aromatic, which are the result of chef’s personal blend of spices.

The polenta was almost indistinguishable from luscious mashed potatoes, and was a great complement to the solid bite of the meatballs. Can’t decide whether you should go for meat or seafood? Then the Seared Scallop ($16) will satisfy both cravings, as the plump scallops come with generous slices of chorizo, as well as truffles parmeggiano and crushed peas.

The contrasting flavours and textures complemented each other, although it isn’t a combination I’ve eaten before, so it took awhile for the dish to sit well with me. 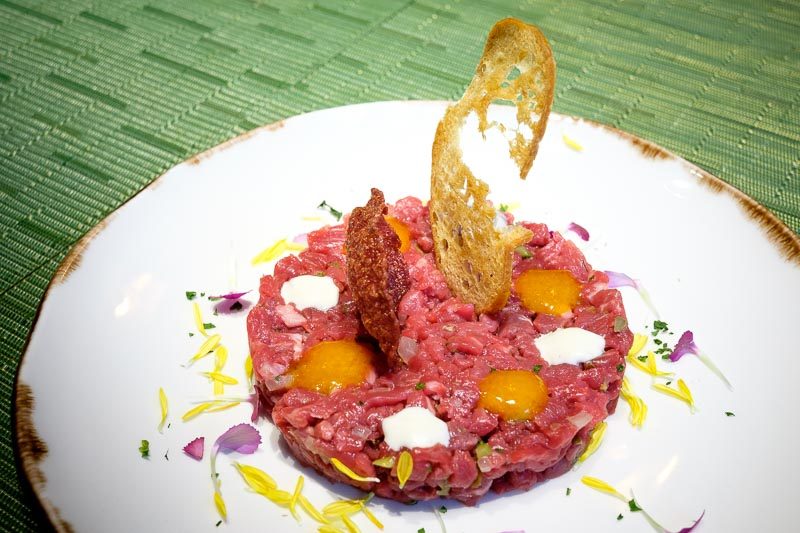 It’s hard to find a really well-executed version of this in most places, but Winestone’s Steak Tartare ($28) is one to beat. They have modernised this traditional French recipe to use confit egg yolk instead of raw egg yolk, due to the latter’s risk of contamination. They have also elevated it to have contrasting textures with the addition of a salami chip, which gave the dish a nice crunchy and salty edge. 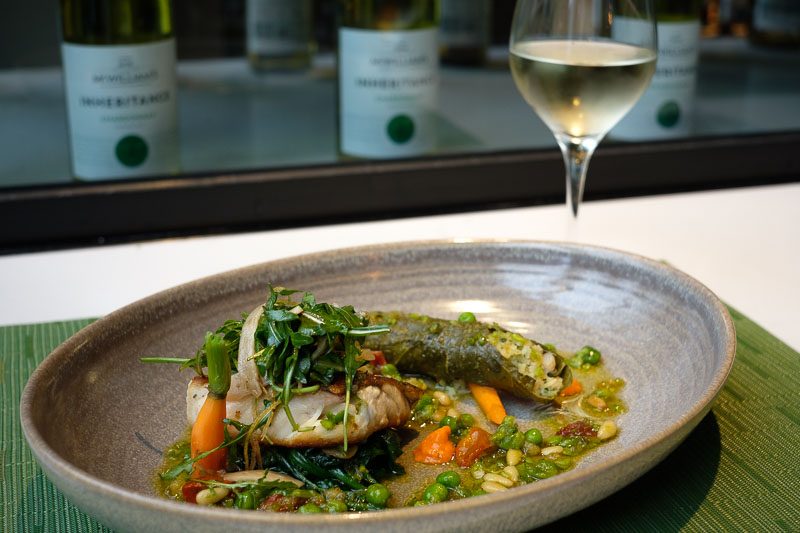 The chef was creative with the next dish, the Sea Bass & Dolma Prawns ($26). The fish is fleshy and flaky, making it a very filling dish for something that modest in portion.

At first, we were wondering where the prawns were, only to be informed that it was wrapped in the grape leaf. I liked the slight char on the fish, and the nut brown butter gave it an added richness which was very satisfying on the palate.

Winestone serves both homemade and dried pasta dishes, and we really couldn’t tell the difference in their Fettucine From The Farm ($25). As a vegetarian dish, this was really flavourful and went down fairly quickly.

The al dente fettuccine was a great choice to hold the savoury tomato-based sauce, and was served with generous bits of artichokes, sun-dried tomatoes, grilled zucchinis and eggplants. 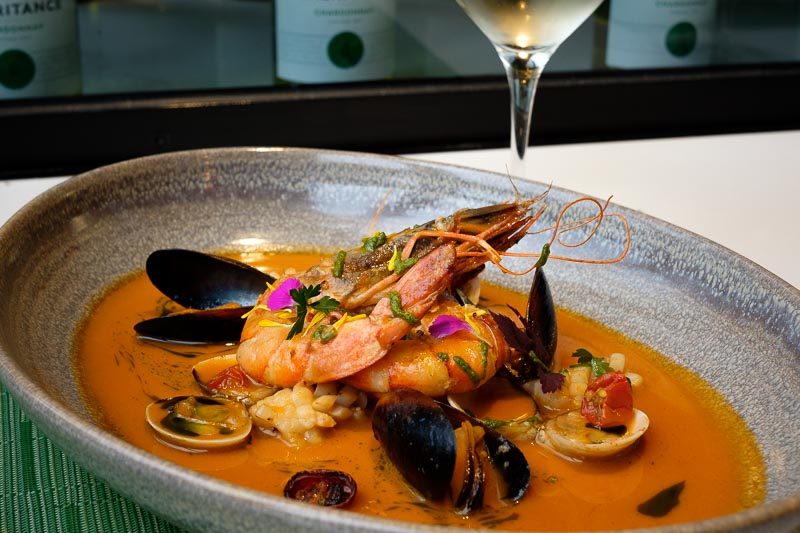 By far, this dish was my absolute favourite. The Cataplana ($24) was aromatic, rich and represented everything I imagine the Mediterranean to represent. Needless to say, the assortment of seafood was succulent and fresh, with an ocean-fresh sweetness brought out the best of the saffron broth. I couldn’t help myself from drinking it like a soup, and if you still have leftover bread, I highly suggest you use it to sop up every last drop. 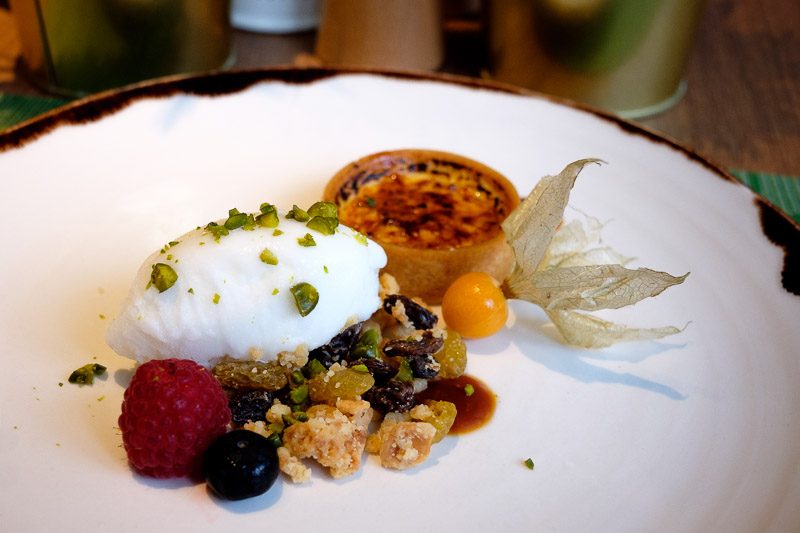 After numerous big plates, I was glad the dessert was a much smaller serving. The Mini Crème Catalane Tart ($14) with lemon sorbet was a great palate cleanser and had a very bright, clean finish. I especially loved the raisin crumble for its added textural contrast and the buttery cookie-like element that opposed the rather citrusy end.

Winestone is so much more than the wine stop that most people might make it out to be. The food here is worthy of repeat visits, especially for the amazing Cataplana. Being a stone’s throw away from the bustling belt of Orchard Road, Winestone serves as a convenient alternative dining option for when you want a change of scenery, yet wish to remain close to the city. I’m confident you’ll agree with my sentiments too, even after one visit.

*This post was brought to you in partnership with Winestone Pak Kashmiri Delights: No Reason Not To Be Delighted With S$1...