Being just a mere two hours plane ride from Singapore, Bangkok is definitely one of Singaporeans’ favourite travel spots when we need a breather from the hustle and bustle of our busy city life.

Avid travellers to the ‘City of Angels’ will be familiar with the Yaowarat district—popularly known as Chinatown of Bangkok. With neon signs blazing huge Chinese characters hanging over rows of eateries and streets filled with lingering foodies, you know you are in for a gastronomic adventure once the exploration of Yaowarat begins. Well, it looks like we won’t have to leave sunny Singapore for our Thai-Chinese food cravings after all. Nestled amongst the row of shophouses in Teck Chye Terrace, is Yaowarat Seafood—a neighbourhood restaurant selling authentic Thai-Chinese seafood, slightly tweaked to suit our Singaporean tastebuds. 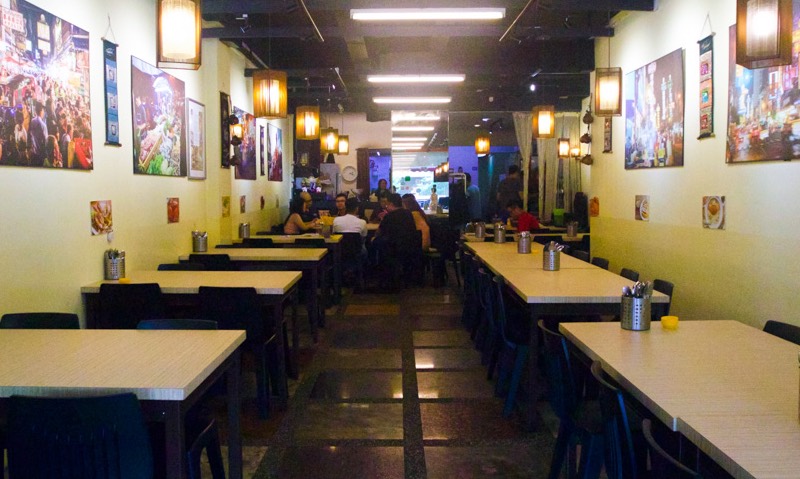 One step into the restaurant and it felt like déjà vu, being teleported to Yaowarat in Bangkok. I was greeted by two Thai wooden sculptures by the side of the entrance and rows of snapshots of Bangkok’s Chinatown aligned on the pale yellow wall running through the restaurant.

There was a vast selection of seafood, meat, rice and noodles dishes in the restaurant, similar to a conventional zi char eatery. Their seafood, especially lobsters, are served fresh, caught live from the tanks which were bubbling furiously by the left of the entrance. 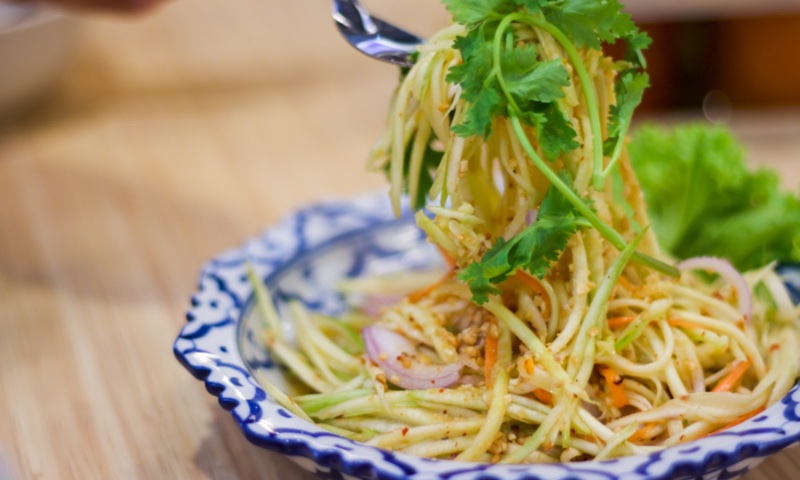 Our lunch started off with a bowl of traditional Thai Mango Salad (S$9.90). The scent of fish sauce and lime made my mouth water and my first bite was a tastebud-awakening of flavours. It was refreshing and fruity; a perfect dish to start off our meal, inducing our appetites, in anticipation for what’s to come next. 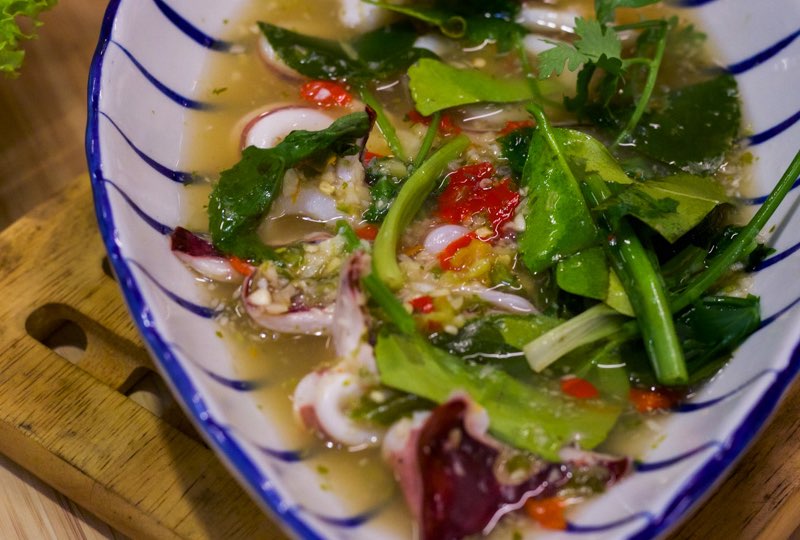 A taste of Yaowarat Seafood’s Steamed Thai Style Squid (S$15.90) and I had great expectations for the seafood served in the restaurant. The squid was so fresh, I could literally taste the sea. Not only that, it was steamed to its ideal texture—tender yet chewy, which went hand-in-hand with the sweet and sour sauce it was steamed in. 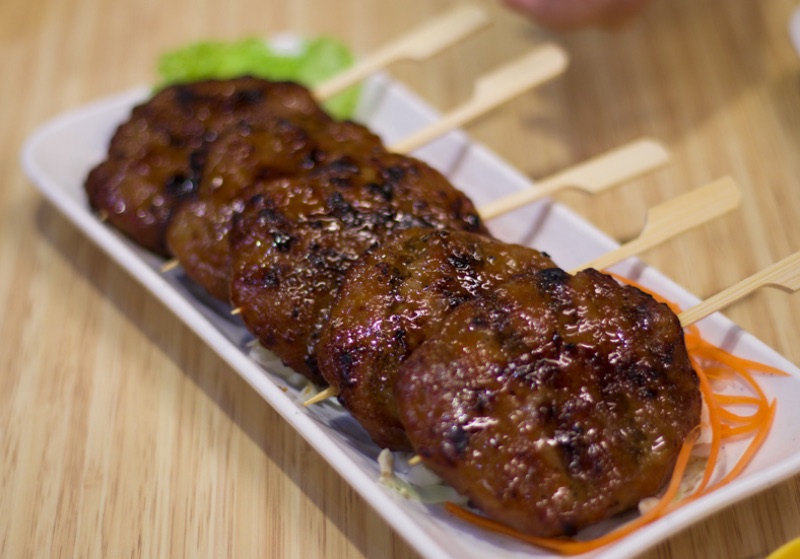 Unlike our traditional satay, the Pork Satay (S$2.90 each, minimum order of two pieces) was a thick circular cut of pork skewered on a stick, lightly chargrilled with a layer of honey marinate. Every bite was a step closer to heaven. The pork was juicy and had a mildly delicious smoky flavour. It leaned towards the sweet side and I definitely recommend you ordering it if you are dining with kids. It will be a hit, for sure! Despite being a seafood restaurant, the chefs at Yaowarat Seafood, do know how to execute their meat dishes well. I was in awe when I ate the Pork Satay, but it was the Deep Fried Garlic Pork (S$12.90) that blew my mind away. The surface of the pork was crisped up in the hot oil with the thin ends being slightly burnt.

One bite and I could feel the fusion of meat and fats disintegrating in my mouth. To my surprise, the meat was crunchy on the outside, yet very delicate and tender inside. The garlic flavour was strong, but not overwhelming, giving the dish a comfortable oomph of spiciness. I get very picky when it comes to steam fish as I have had a fair share that was way under my expectation—they are either too tough and chewy or have a really bad “muddy” taste. Thus, I was sceptical when the Seabass Steamed With Bean Paste (S$29.90) arrived at our table.

Eaten on its own, the seabass had a slightly fishy aftertaste that was somewhat unpleasant. Luckily, the fermented savoury flavour of the bean paste was able to mask the fishiness, making it more palatable. The fried pork lard sprinkled on the fish was a nice addition as it brought a different texture to the dish. Tom yum is a must-have at all Thai restaurants and this was not an exception at Yaowarat Seafood. The restaurant not only serves the regular Tom Yum Seafood Soup (S$18.90 for small, S$28.90 for large), they went a step further and introduced the Yaowarat Tom Yum Mama Seafood Pot which comes in two variations—Crab (S$88) and XL Lobster (S$128). The square metallic deep-dish was overflowing with an entire slew of seafood, together with mama noddles and two egg yolks. As expected, the seafood was luscious and fresh (well, the blue lobster was literally just caught out of the tank when we ordered the dish).

What disappointed me was the tom yum broth, which was way too salty for my liking. To be fair, the broth did have savoury flavours of the sea, as the seafood was still cooking in it whilst we were savouring the dish.

This, however, also made it brinier with time when the broth evaporated and got thicker. If you are a fan of strong flavours, this might be it for you. If not, try the Yaowarat XO Treasure Pot instead. If there was a reason to make returned trips to this restaurant, it has got to be because of the Yaowarat XO Treasure Pot. We got the crab version (S$98) and I loved every single bit of it. This dish certainly lived up to its name as it features treasures of the sea such as the Sri Lankan crab, prawns, Venus clams and squid, served piping hot in a claypot. 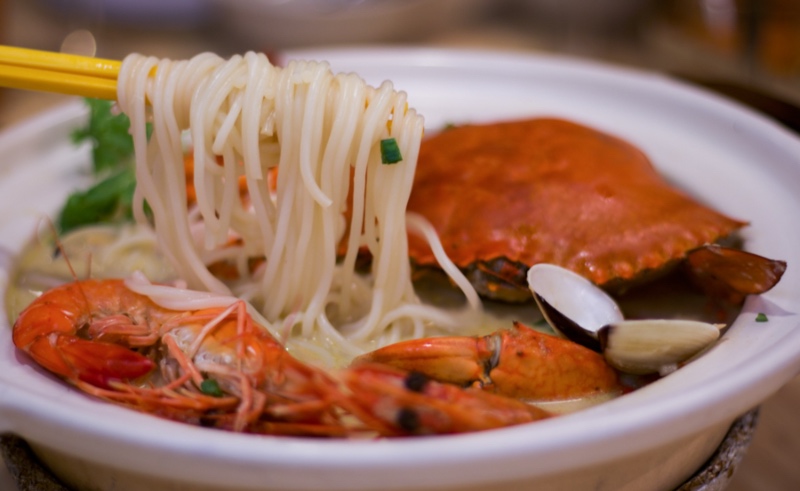 The crabs that were bathing in the milky broth were succulent, substantial and packed with meat. Besides that, the broth itself was robust and rich. It had a subtle aroma and taste of XO, which warmed my body instantly and was so addictive to sip on. I found myself going back for seconds (maybe even thirds) just for the slurp-worthy noodles and the hearty seafood soup. 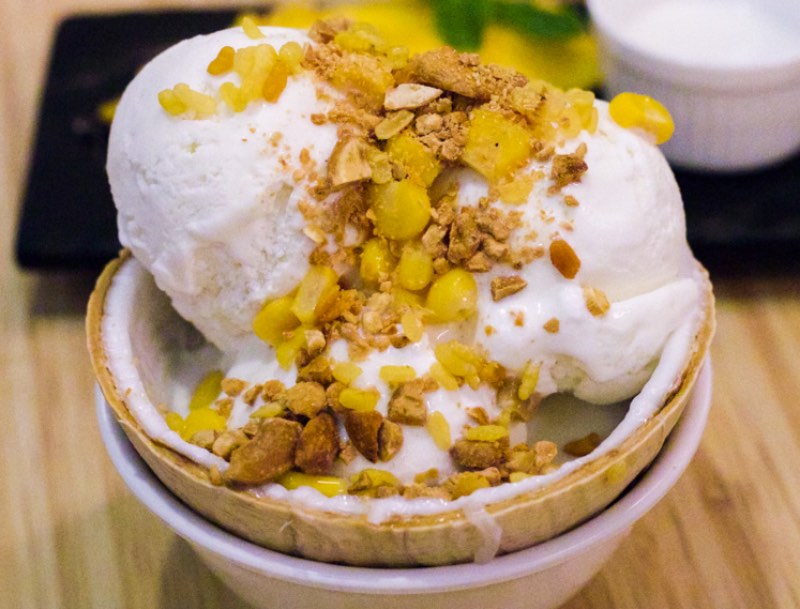 Just like how they serve it in the Chatuchak night market, the Cha Chu Chak Coconut Ice Cream was served in a young coconut husk. The dessert was simple—coconut ice cream, roasted cashew nuts, corn and mung beans—yet, it was creamy and flavourful, making it a satisfying after-meal treat. 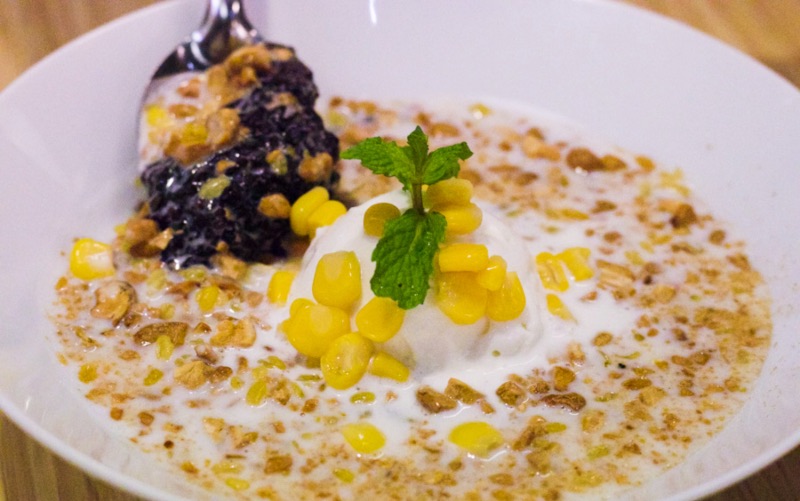 The Black Glutinous Rice Ice Cream, on the other hand, was heavier on the palate. At first glance, it looked like we were served breakfast cereal as the warm black glutinous rice hid flawlessly under the blanket of semi-melted vanilla ice cream, topped with roasted cashew and corn.

The glutinous rice revealed its dark glory as I scooped into the dessert and I was pleased by the hot-cold combination when hit my mouth. When eaten together, the dessert had a slightly toasty flavour which complemented the sweetness and creaminess of the melted ice cream. If not for the vast amount of food I have consumed, I would have easily wiped this entire dessert clean!

If you are looking for a zi char-style dinner and would like to try something out of the norm, Yaowarat Seafood is the right place for you. The dining environment was comfortable and homely. I thoroughly enjoyed the authenticity in the use of Thai flavours for their dishes and will definitely bring my family back to try the Yaowarat XO Treasure Pot.

I’m sure my Dad, who is an avid fan of anything that says ‘crab bee hoon’, will love it!