With countless claypot rice speciality stalls out there, one has to be really good in order to stand out.

I heard about this relatively new stall in Clementi which opened in 2018, so I decided to head down to see if it was that good. We were intrigued to find out that the stall actually has roots in Malaysia. 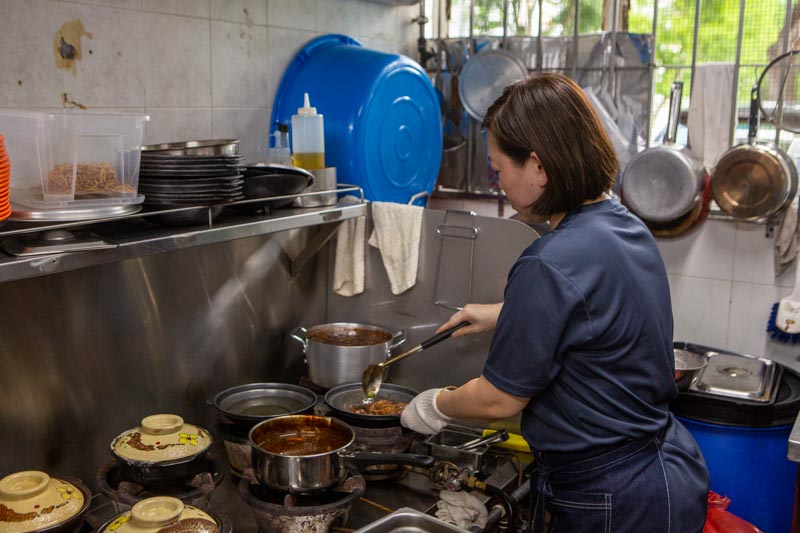 It turns out that Reiko hails all the way from Taiping, Malaysia. Back there, her father used to run an empire of claypot rice stalls which dates back to 1983.

Upon retiring, Reiko’s father handed over all his secrets to his relatives so that they could continue the business. 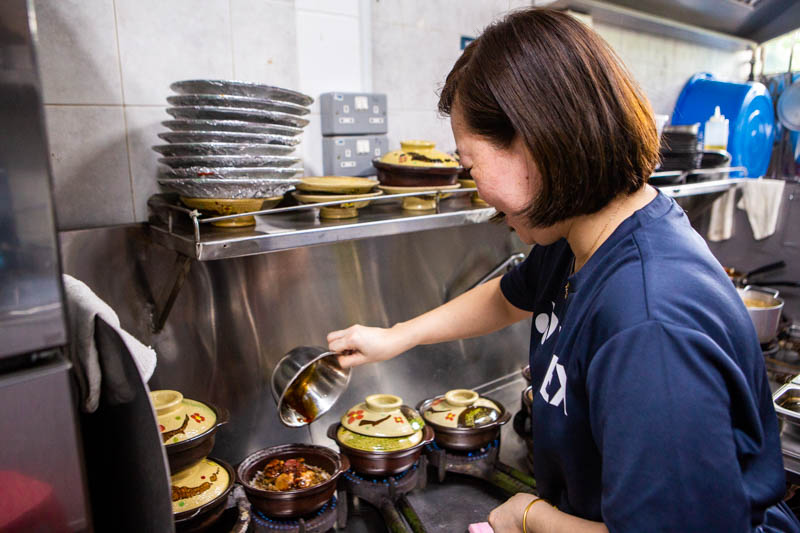 Today, many of Reiko’s relatives run their own claypot rice stalls in Malaysia. Though they don’t use the name of the original stall, the recipes they use are from Reiko’s father.

Since moving to Singapore 14 years ago, Reiko had always wanted to carry on her father’s claypot rice legacy. But it wasn’t until 2018 when she finally opened the stall, the first and only in Singapore amongst her relatives. 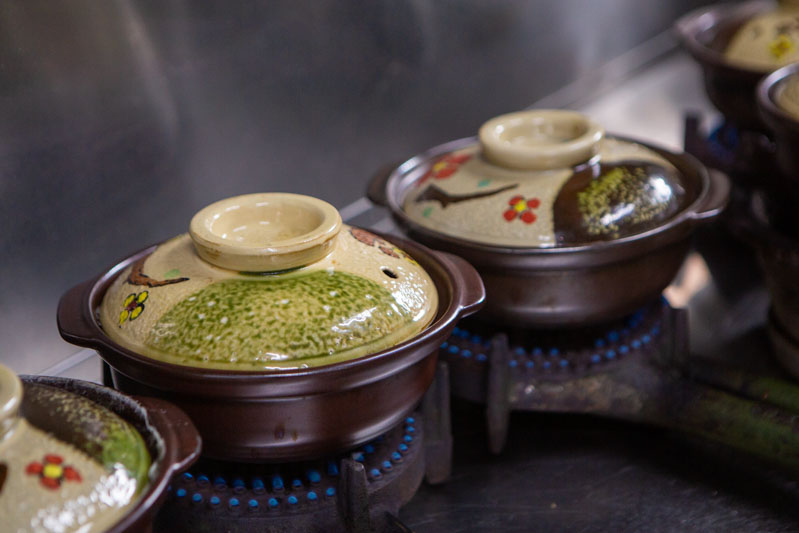 Reiko uses a specific type of claypots in order to stick to her father’s traditional cooking methods. 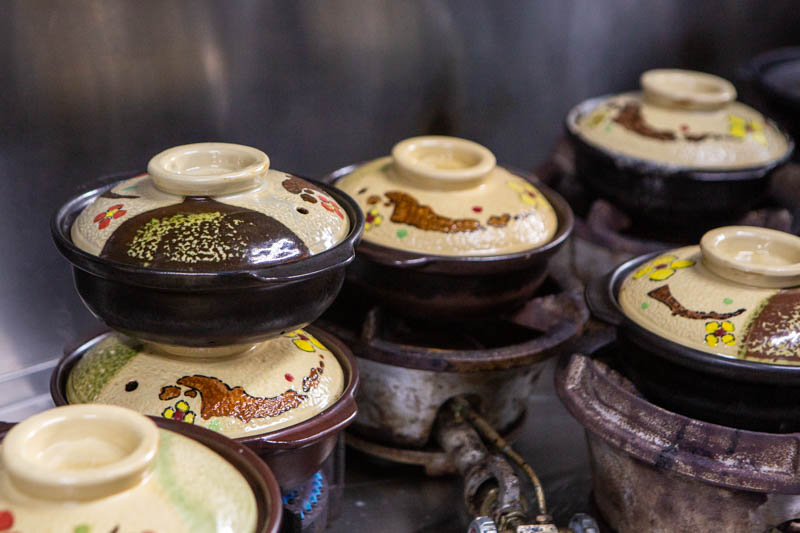 The claypots she uses are specially handcrafted and imported from her hometown. As such, you won’t be able to find them anywhere in Singapore. Reiko prepares the ingredients for her Claypot Chicken Rice 瓦煲飯 (S$6.50) by putting them in the special claypots in advance. She only starts cooking the dish when a customer orders, to keep it fresh.

I found this very smart as well, as it saved a lot of time since she was manning the stall alone. 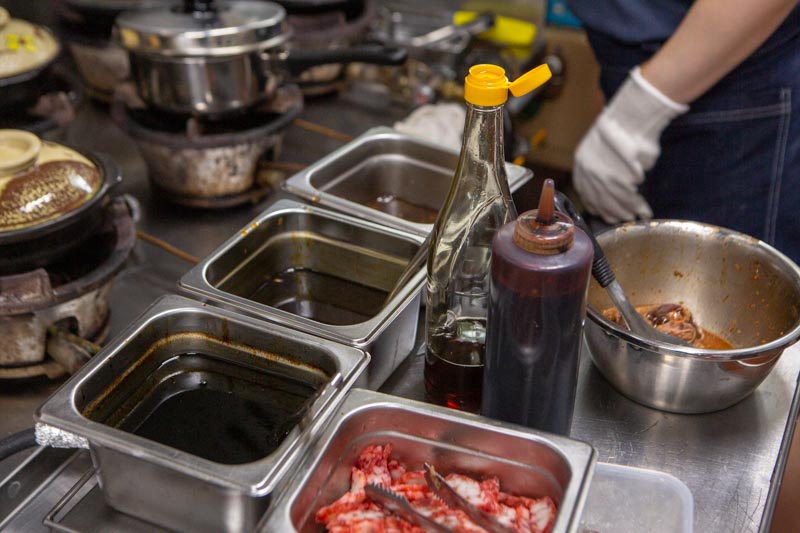 I noticed the owner was adding a variety of sauces into the claypot without any measurements. This can only be achieved with years of experience!

The concoction of sauces she adds is part of a secret recipe. However, Reiko was able to disclose that shao hsing hua tiao wine goes into it. 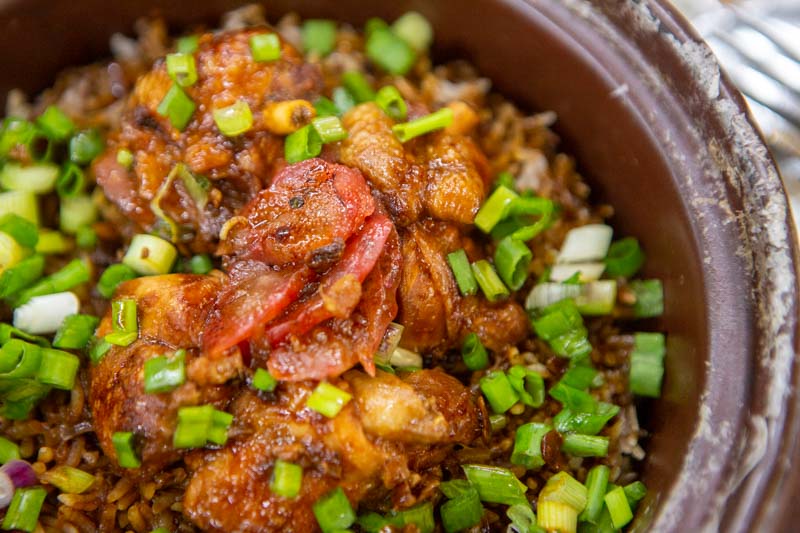 Just mixing the ingredients together was already making my mouth water and the fragrance from the claypot dish filled the air. Right off the bat, I could see thick slices of lup cheong (Chinese sausage) in the claypot. 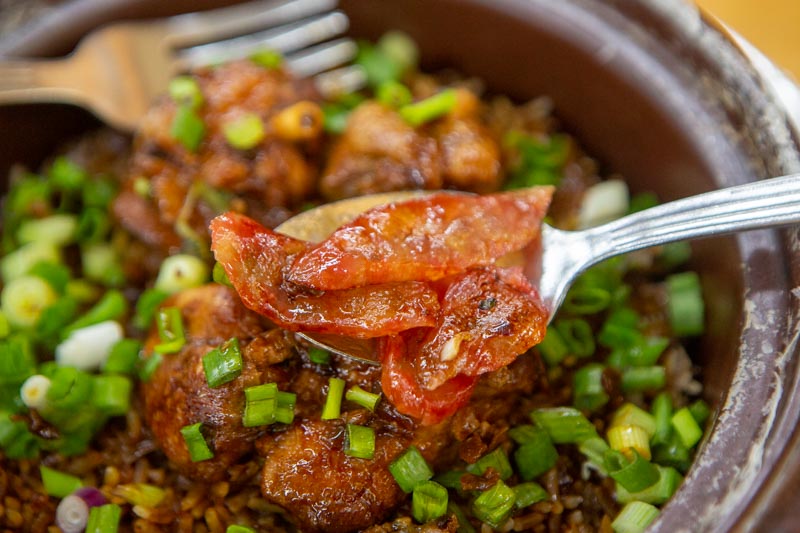 They were sinfully oily, oozing juice and decadence with every bite. 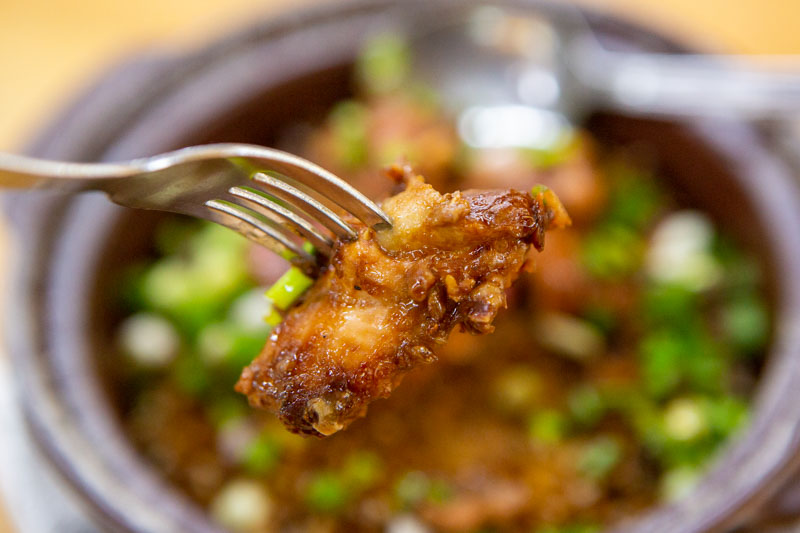 The chunks of chicken meat were amazing too.

They had a deep-brown hue which was proof that they had been marinated for a long time. 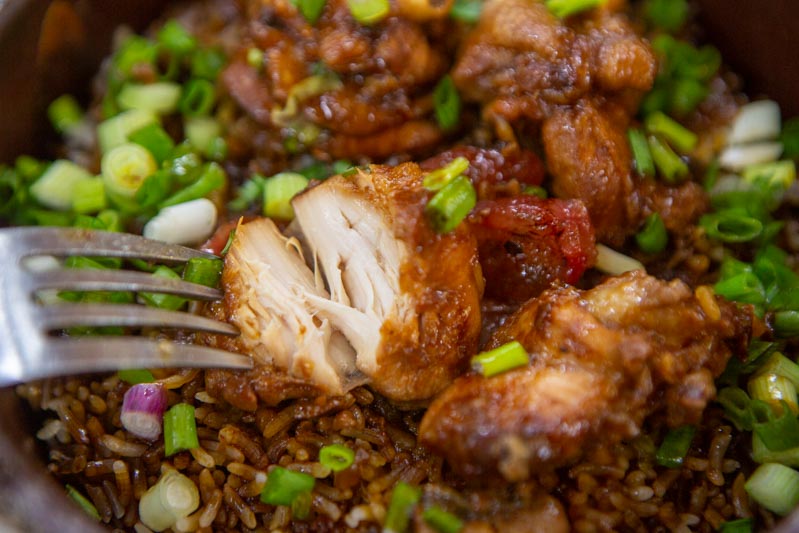 Flavourful and juicy, they went very well with the umami rice.

I tried to ask about the ingredients in the marinade but the owner was totally tight-lipped because after all, the secret recipe belongs to her father. 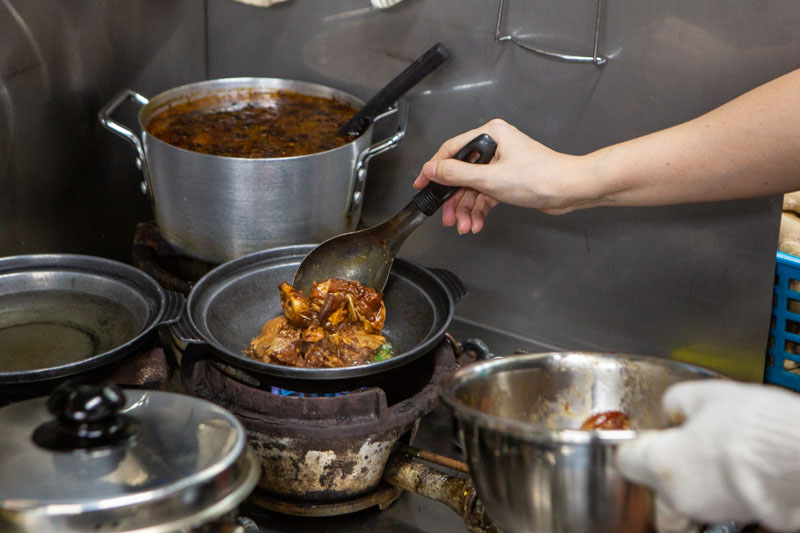 Yong Nian Claypot Chicken Rice also uses fresh chickens which are delivered every two days. As such, the chicken meat was extremely fork-tender and absorbed all the flavours of the marinade. The rice was also perfectly soft and chewy. I could taste every grain, a mark of well-cooked and quality rice. 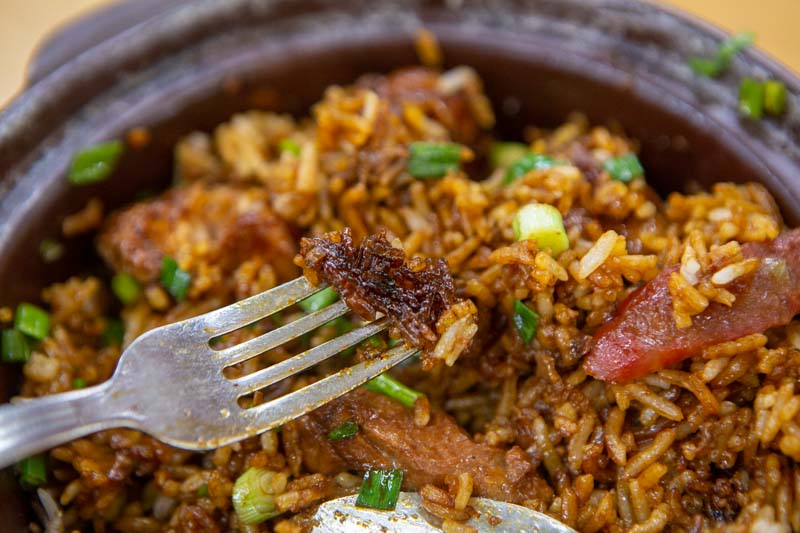 Of course, the burnt rice bits at the bottom of the claypot were crackly and scrumptious too. 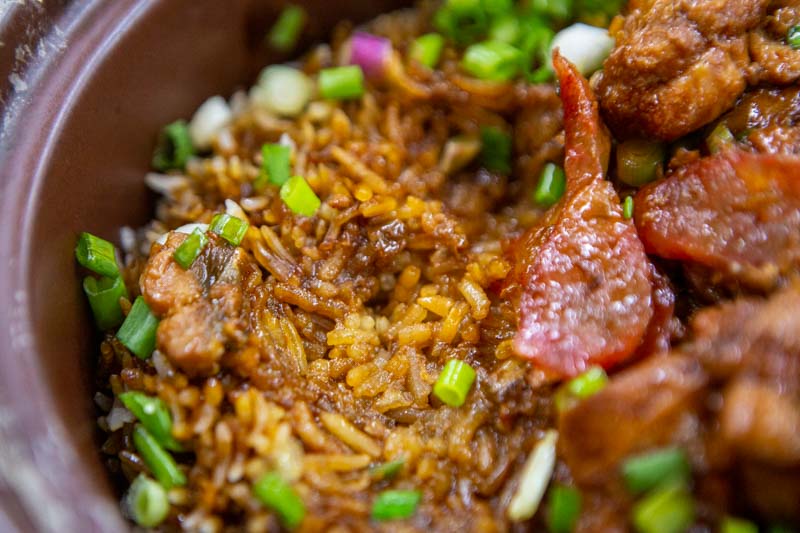 I realised that compared to claypot rice elsewhere, the rice took longer to become charred. This is because the special claypot keeps the rice warm instead of cooking it further. Unlike most claypot rice stalls out there, Yong Nian Claypot Chicken Rice doesn’t provide any bowls or plates. As such, you’ll have to eat it straight from the claypot.

Reiko explained that this keeps the ingredients warm so that they’ll taste good throughout the meal. 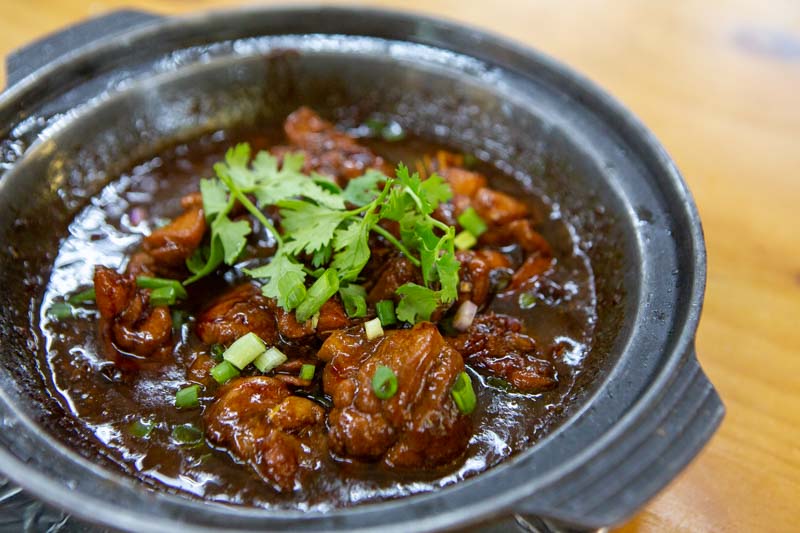 The next dish I had was the Claypot Chicken 瓦煲鸡 (S$6.50). I bet you’re wondering, aren’t the two dishes essentially the same, just that this comes without rice? 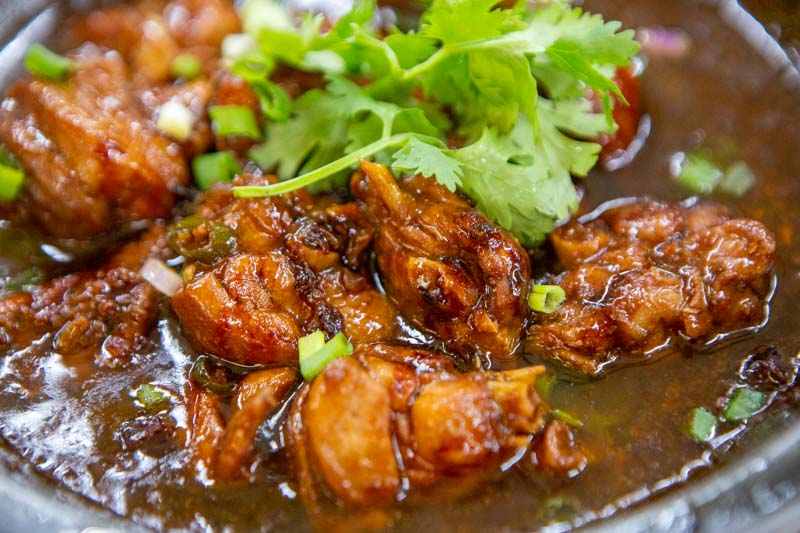 I thought the same, but Reiko explained that the recipe for this dish is different from for the claypot rice. Apparently, Reiko created the dish to go with beer.

Sesame oil, amongst many other sauces, goes into the dish, making it incredibly aromatic. 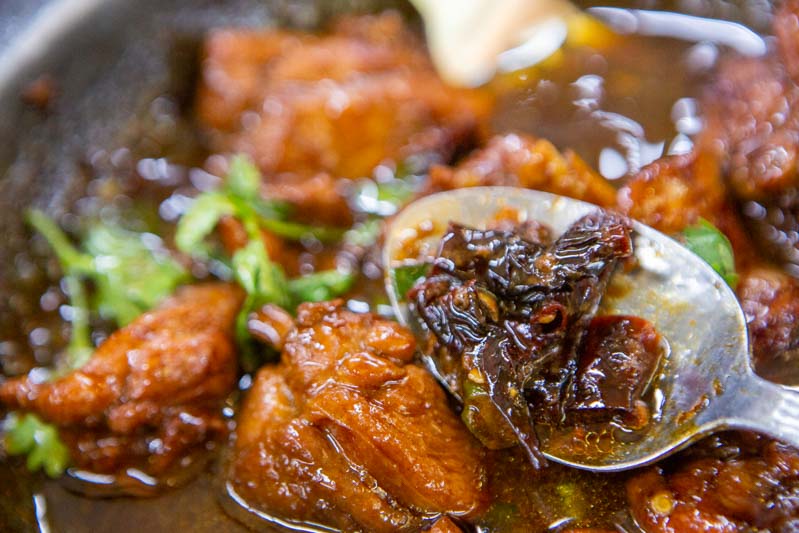 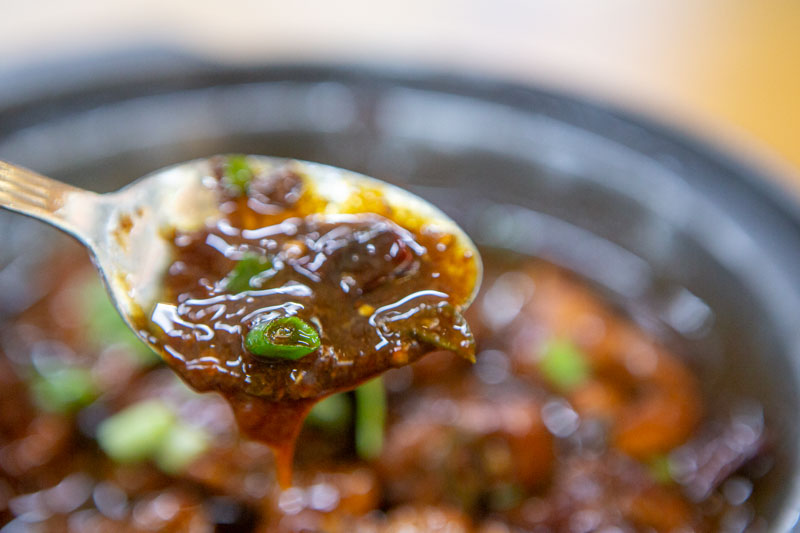 The other two are green chillis, one of which is actually grown by Reiko’s family back in their hometown.

So if you have a low spice tolerance like me, think twice before ordering! 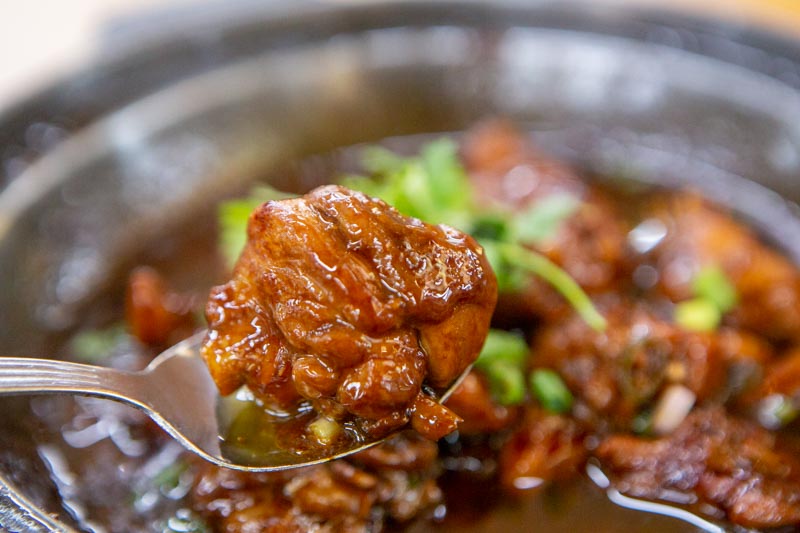 As expected, the chicken was super tender and juicy, with a strong salty flavour which I absolutely loved. 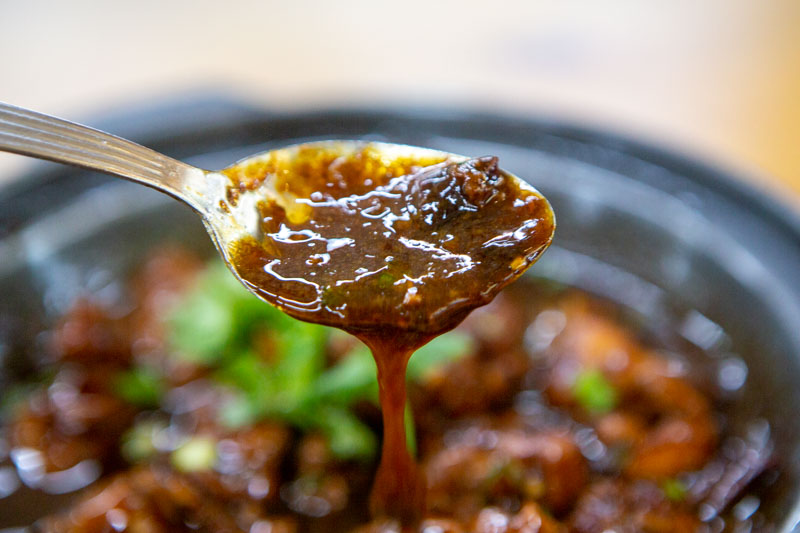 The sauce was to die for too. Give me a bowl of white rice and I reckon I can actually finish every last drop of it. 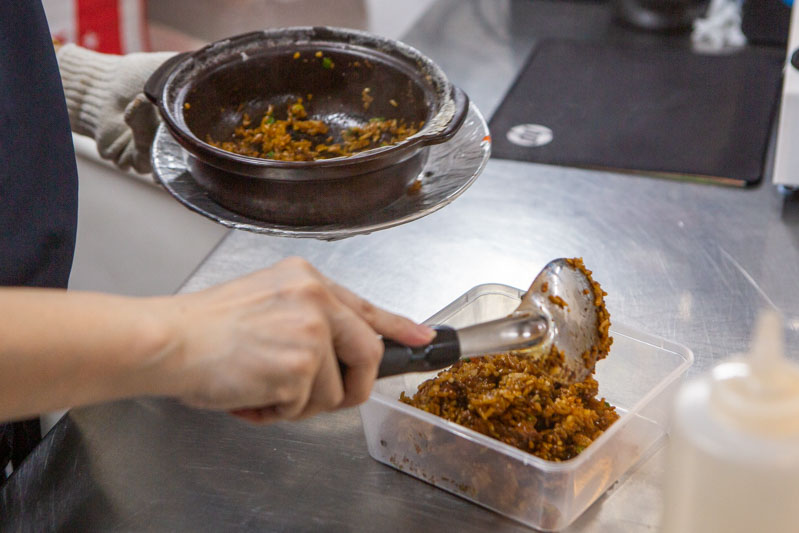