There’s something about pig’s organ soup that is just so comforting and satisfying. This soup originated from the Teochew dialect. Perhaps because I’m Teochew myself, I’ve always had a soft spot for this bowl of savoury and salty soup.

There is a fine line between good and bad pig’s organ soup as it is not easy to master this dish. To me, a good broth has to be flavourful, yet well-balanced. As I am not a huge fan of offals, I am very particular about their freshness and they have to be well-cleaned, without any smell.

The two most famous pig’s organ soup that I know of is Authentic Mun Chee Kee and Cheng Mun Chee Kee. There has been a bit of debate as to which is the better one as they originated from the same family but subsequently went their own ways.

There are supporters on both sides, but I have never pitted them against one another for a fair comparison. Hence, I decided to take on the challenge to see for myself which is the better version. I decided to visit Cheng Mun Chee Kee first for a fairer comparison, as I am more familiar with them. The environment is not the most comfortable, with tables and chairs packed closely together to fit as many as possible.

While you place your order at the counter, payment is only made when you get your food. Their service is pretty efficient as the food arrived almost immediately. 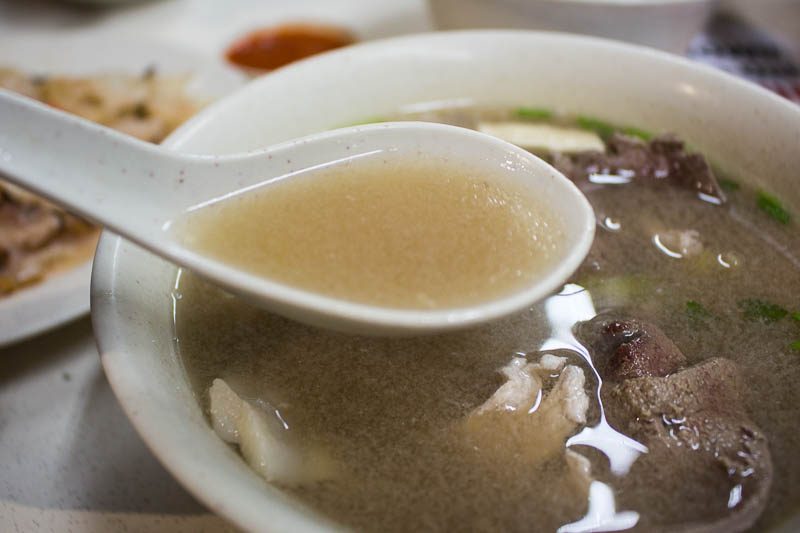 The main comparison between the two is the pig’s organ soup itself, so I had to try that first. As I scooped up the broth, I realised it was darker and murkier than what I am accustomed to. Taking a sip, I was blown away by its rich and robust broth.

It was very porky, peppery and salty but not because it was laden with MSG. They were extremely generous with the salted vegetables, which were soft and easy to slurp with the soup. 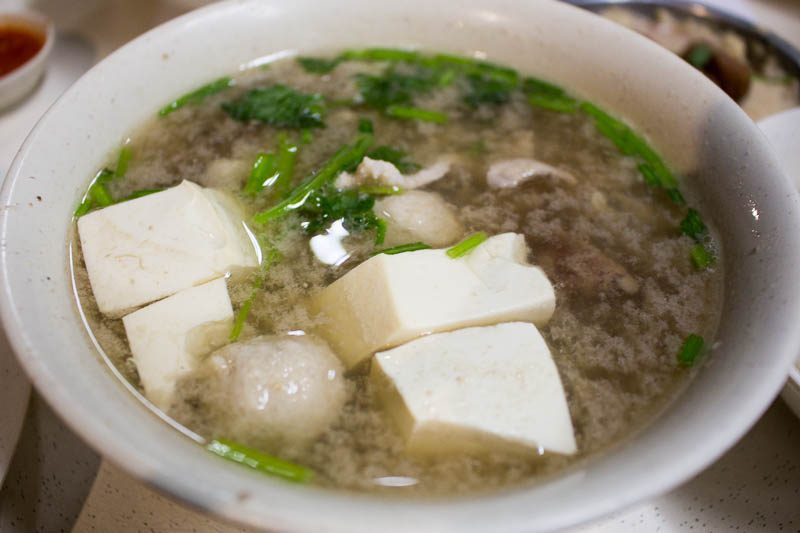 I was impressed by the flavourful soup and had high expectations for the ingredients in it. I got the Large Pig’s Organ Soup (S$6.20), which came with the usual ingredients of meatballs, tofu, lean meat, salted vegetables, belly, stomach and liver. This large size also came with an extra piece of small intestine and kidney. 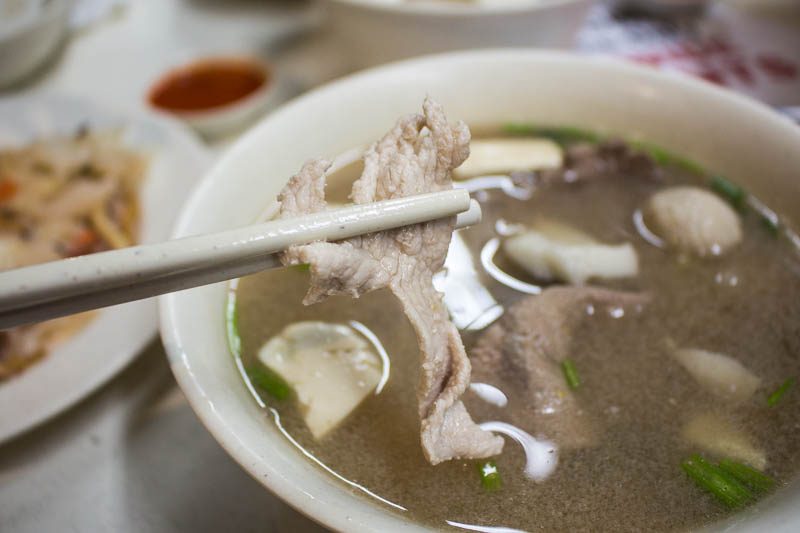 Unfortunately, I was let down. The lean meat, which is my favourite part of the dish, was tough with a rough texture. 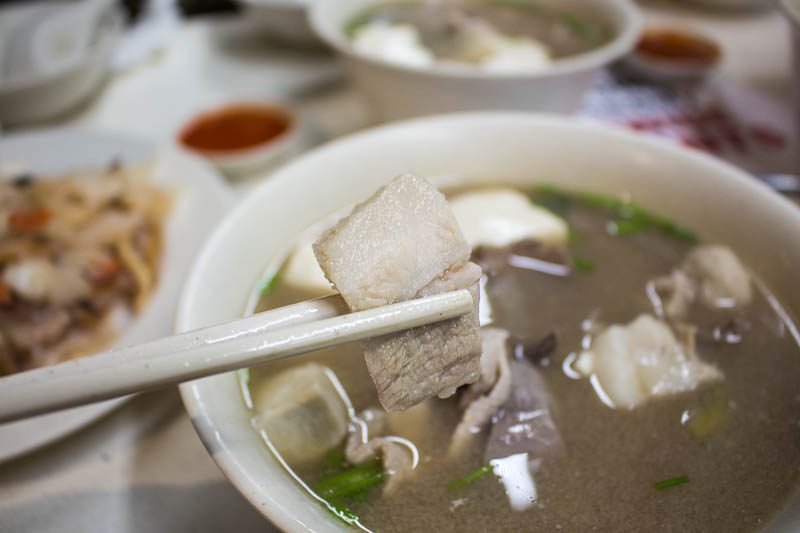 Their saving grace was the pork belly, which had a good proportion of fat to lean meat. 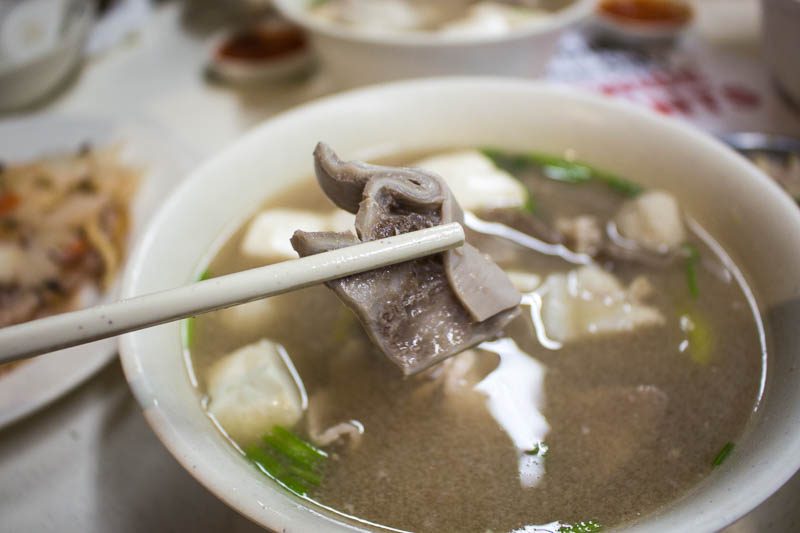 I was pleased to find the innards were cleaned thoroughly, whereas the stomach was nice and chewy. 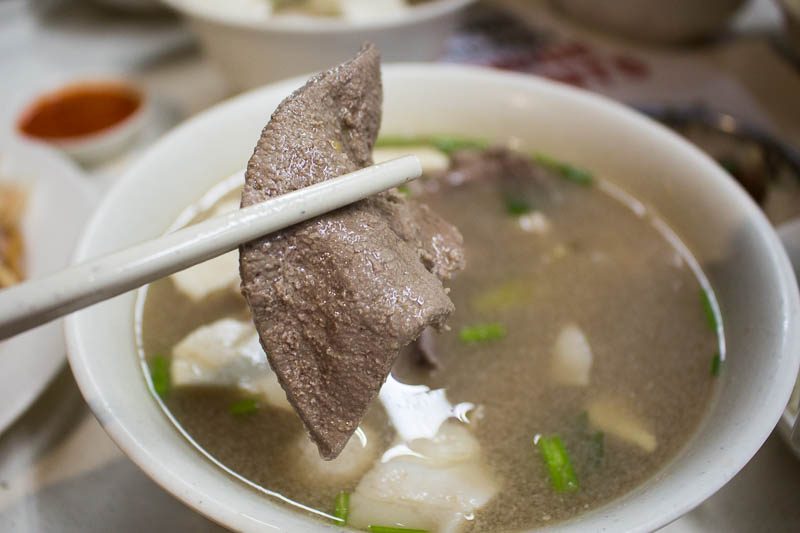 The liver here had a slightly powdery texture and was a tad overcooked, but it was still prepared well. 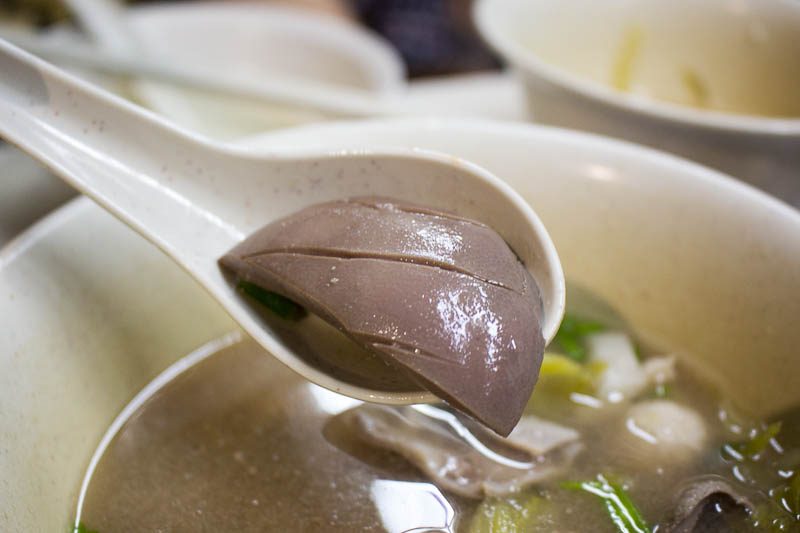 The kidney was tender with a smooth texture. Although the taste wasn’t as mild as I would have liked, it was still acceptable as there wasn’t any gaminess to it. The Stir Fried Cabbage (S$3) was nothing to shout about. Usually, this dish would have a strong smell due to the dominant use of the red fermented beancurd. However, it was pretty subtle.

This actually made it more palatable as the acquired taste of the fermented beancurd is not for everyone. I liked that the vegetables were appropriately soft and easy to eat. For S$3 a plate, I would get it simply for the sake of micronutrients. 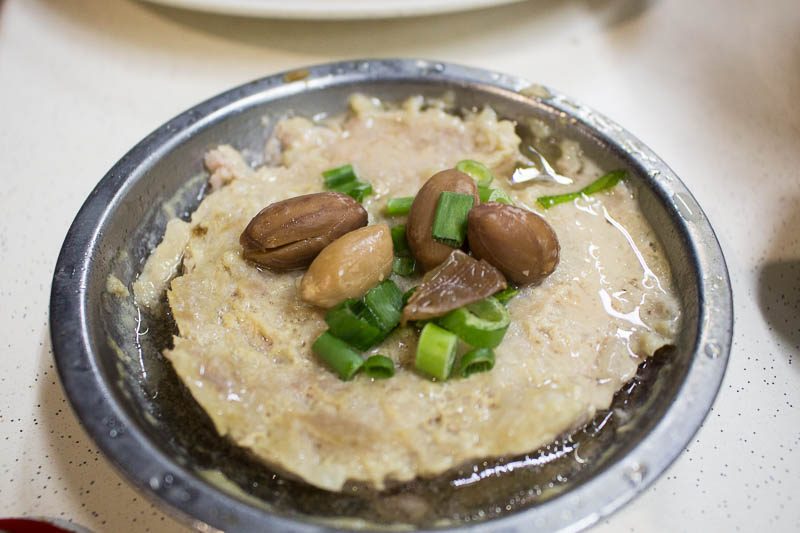 What I was really impressed by was their Steam Minced Meat With Chestnut & Salted Fish (S$3). This is definitely a must-have when you are here. It is not only affordable but absolutely delicious too. It was packed full of flavours, which went well even with plain rice.

I liked the different flavours and textures in the simple dish. From the tender savoury meat to the crunchy chestnuts and a touch of saltiness from the salted fish. They complemented each other to form an appetising side which I really enjoyed.

We had our impressions of Cheng Mun Chee Kee fresh in our minds and headed over to Authentic Mun Chee Kee for our second meal. They were not too far apart, which made the competition for customers all the more intense. Both stalls were equally packed with people, which highlighted how each had their fair share of loyal customers.

I managed to get some information on Authentic Mun Chee Kee, which is currently helmed by David and Derek Tan. They claim to have the original owner, Uncle Mun Chee, who created the original recipe since 1973, with them. They worked with him and his family members closely even after acquiring the business six years ago. 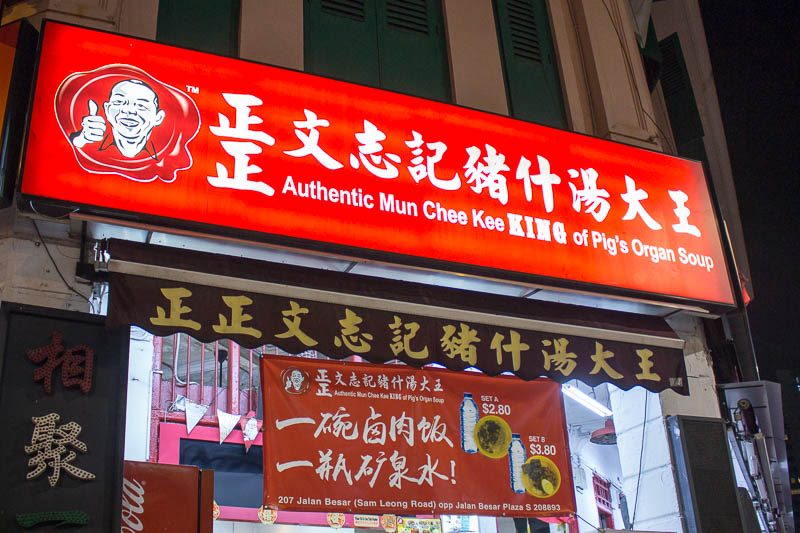 Here, I placed my order and paid at the counter. I got the exact same food items for a fair comparison, although the menu here at Authentic Mun Chee Kee is much more extensive. The seatings were slightly more spaced apart with better ventilation, although I would not say that it’s far more comfortable in terms of ambience.

Efficiency-wise, they were equally as fast. Our full order literally took less than a few minutes to be served. 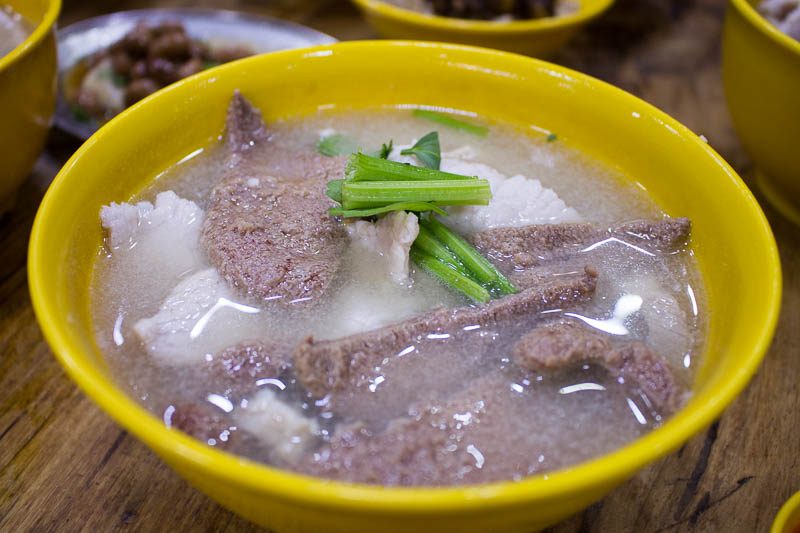 Again, I went for the pig’s organ soup first, as that was an imperative factor I took into consideration. We got the Large Pig Organ’s Soup (S$6) that was similar in size to Cheng Mun Chee Kee’s. 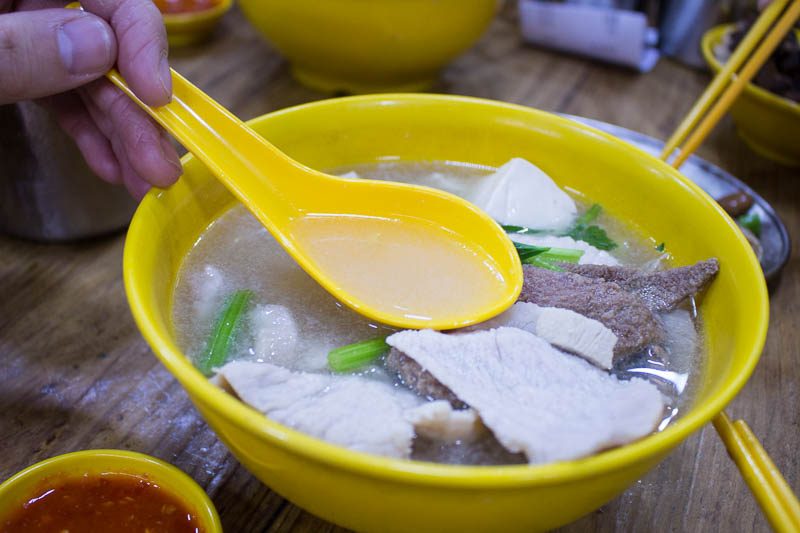 Trying out the soup, I found that this was significantly lighter in flavour as it is in colour. It was lacking that oomph that the previous place offered, although I must say this was more refreshing for that exact reason.

It was more well-balanced, with just a touch of saltiness. I enjoyed this subtle and clean version more as it is something that I could indulge in without feeling jelak. Here, they offer refillable soup, which is perfect for those who love slurping it up like me! 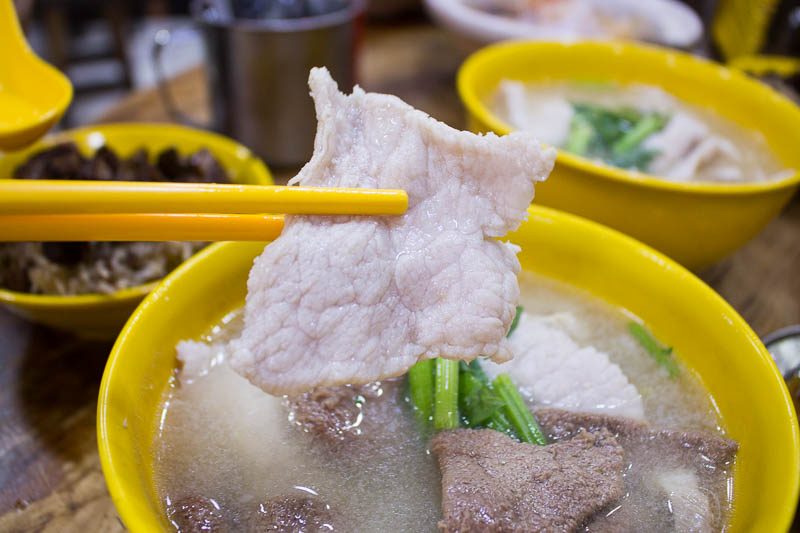 The soup was also generously filled with ingredients, sans the kidney and small intestine. I had to try the lean meat first, and I definitely preferred this version way better. Not only was it larger in size, but it was also very tender as if it has been pounded beforehand, which made it such a joy to eat. 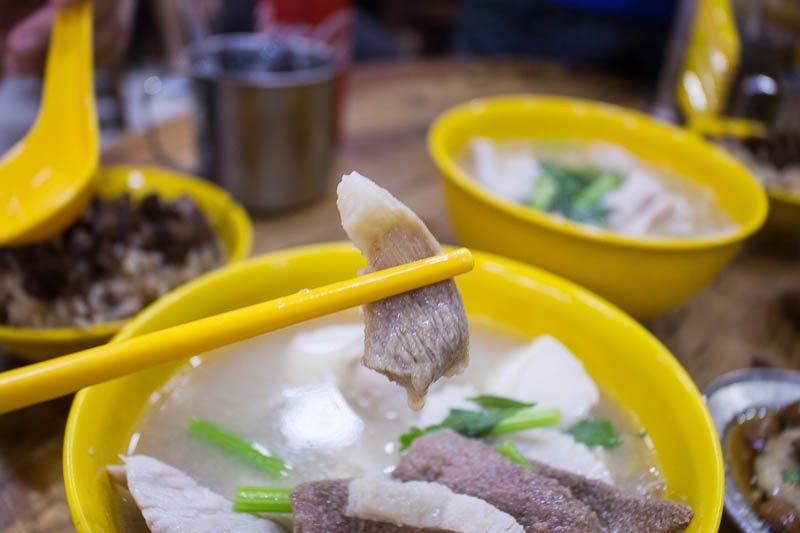 However, the pork belly here was very inconsistent. Some of them were too fatty, whilst some had no fat on them at all. The offals here were well-cleaned too, with the right amount of chewiness from the stomach. I liked that the pieces of stomach here were bigger so I could taste the softness of the inside for a varying texture. 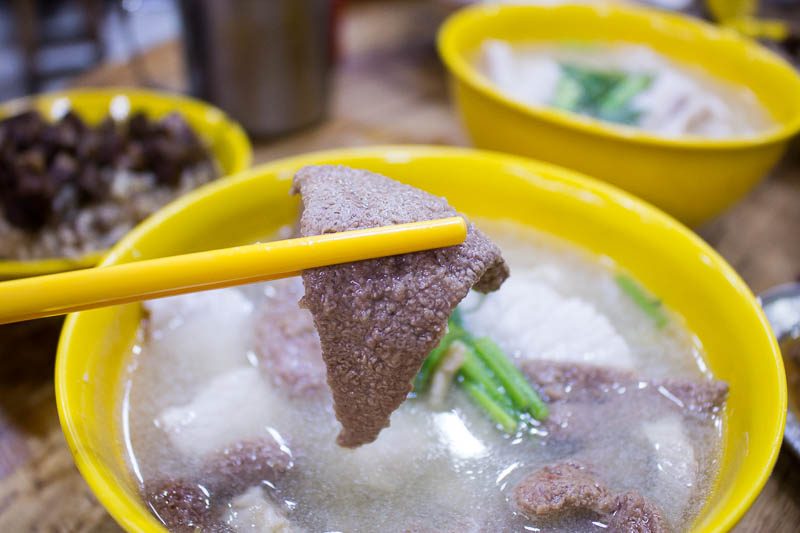 Whilst the liver looked coarser here, it did not have that strong off-putting taste. It was very tender on the inside, which added more dimension to the bowl of soup which I did find was pretty enjoyable. 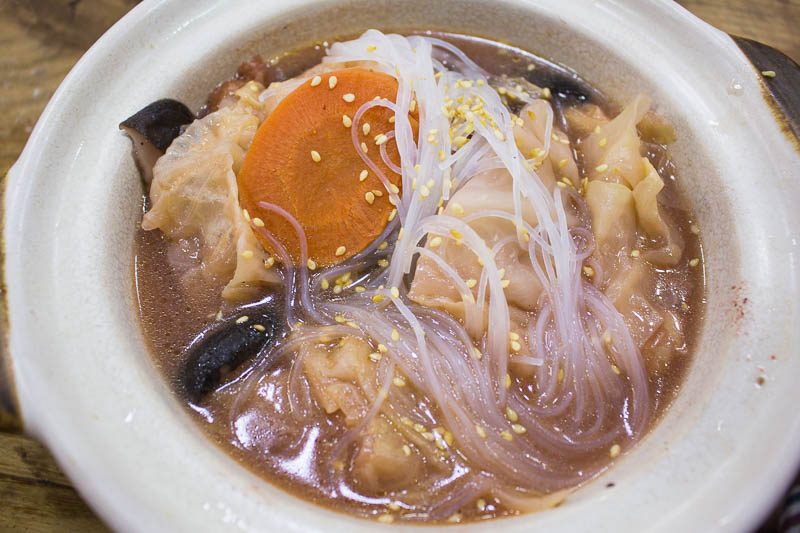 Similarly, we got the Claypot Luo Han Zai (S$5), which was essentially the same vegetables but plated differently. This was pricier, but it came in a bigger portion as well. This version is definitely more authentic, with a distinct smell from the fermented beancurd.

However, the vegetables were not soft enough for my liking, which made me feel like the one at Cheng Mun Chee Kee was better. 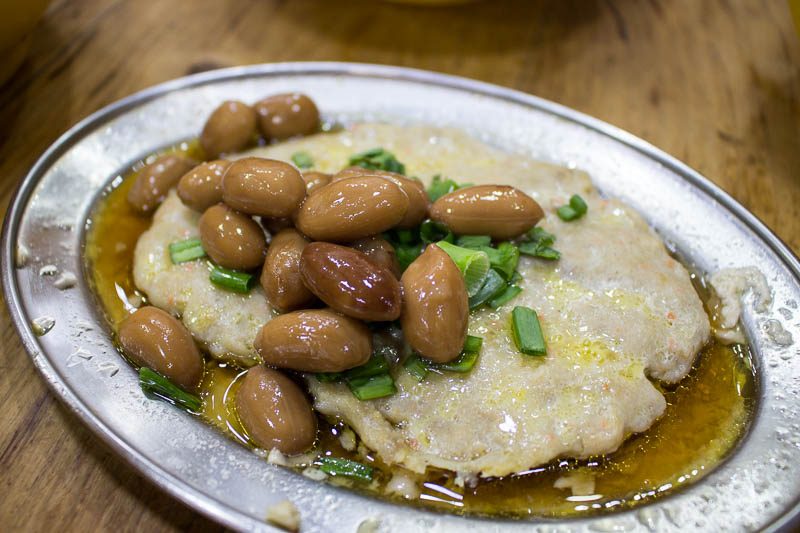 The Salted Fish Steamed Minced Meat (S$5) was huge, almost twice the size as the one we had at Cheng Mun Chee Kee, justifying its price. It was slighter tougher, attributed to the fact that fewer fats were being used in the mix.

I was okay with the texture, but taste-wise it was much drier too. This was a sign of the meat being overcooked. In addition to it being a tad overkill on the salted fish, I wouldn’t get this again. 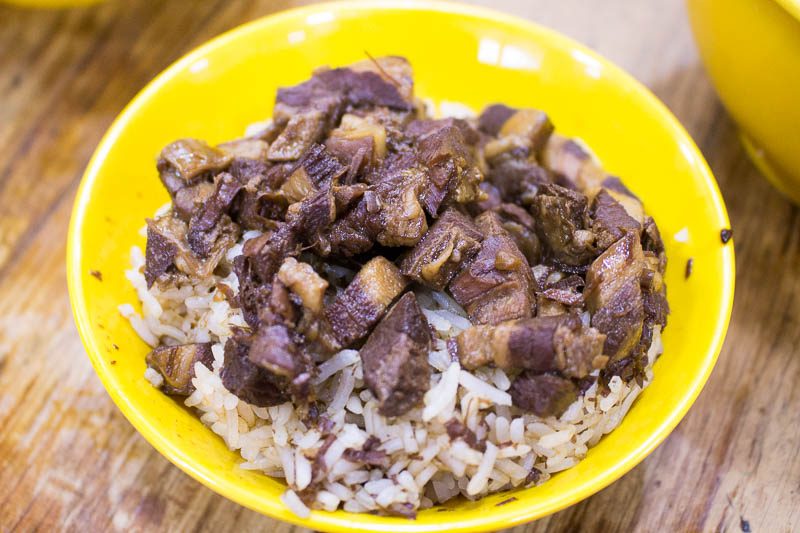 One thing that Authentic Mun Chee Kee superseded my expectations in was their Braised Pork Rice (S$2). The portion was huge, where I could foresee one just having this on its own as a full meal. Whilst generous in portion, it did not compromise on quality. 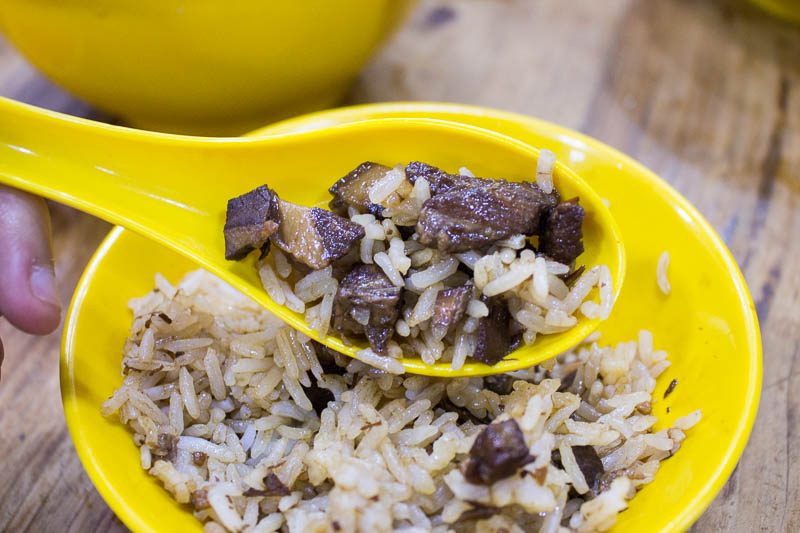 The rice was soft and fluffy, which made it a perfect absorber of the delectable sauce. Chunks of braised pork belly covered the entirety of the rice, and I could see the glistening layers of fat and lean meat. It tasted just as good as it looked, which was melt-in-your-mouth tender with just a bite from the rice.

Just this alone would win me over to visit this outlet instead. This also complemented the lighter broth that they offered, which helped to cut through the richness of the rice.

After having the pig’s organ soup from both outlets, I was torn between them. Price-wise, it was pretty similar if you take into account the portion sizes. In terms of food standards, there were hits and misses in each outlet as both had their strengths and weaknesses. I think, overall, it boils down to one’s own taste and preference, and what you perceive would be the more essential factors. 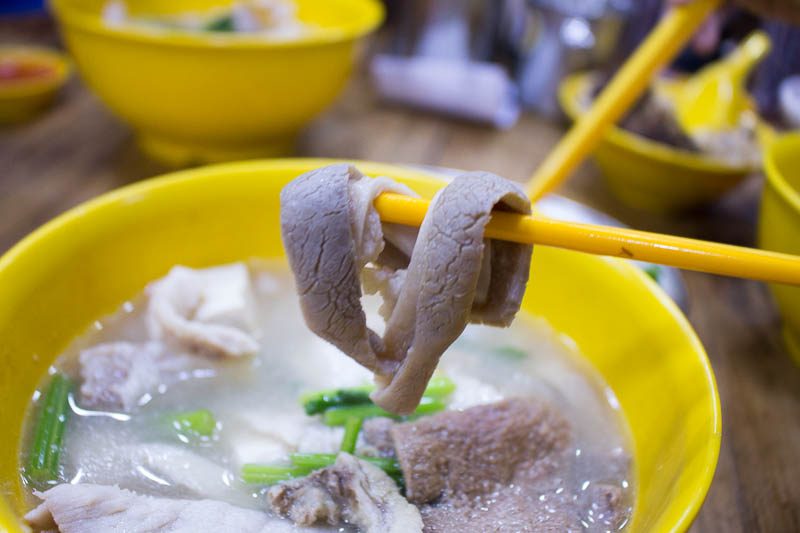 To me, I would pick Authentic Mun Chee Kee because I really loved their tasty Braised Pork Rice. That was a winner for me, coupled with their comparatively more tender meats and light, yet well-balanced broth. However, if you are one that prefers a richer broth and the Steamed Minced Meat is a must have as your side dish, you may prefer Cheng Mun Chee Kee instead.

If you have been to both, which is your preferred outlet?