Most bakeries these days serve up typical and safe offerings, whilst some strive to differentiate themselves through innovative creations. Chuan Ji Bakery Hainanese Delicacies caught my eye as they were unique, in their own way.

Most of their food and drink items are traditionally Hainanese. They even offer Hainanese flaky biscuits, otherwise known as salt-and-pepper mooncakes. I have never tried them before. They are very rare these days, and it piqued my interest as to how they would taste like as I personally love the common Cantonese style mooncakes. Hence, I decided to take a trip down to Macpherson Mall to try them out. By no means is Macpherson Mall a common hangout spot. Albeit an Ibis hotel is located right next to it, it was predominantly empty with loads of stores up for rent. Chuan Ji Bakery Hainanese Delicacies stands out with its bright signboard, with glass panels that showcase the interior of the store.

The interior is simple but well-curated, with wooden furniture that evoked a sense of nostalgia. I liked the blackboard and chalk-written menu, which added to its retro vibe. There wasn’t much variation to the menu with only two mains, both Hainanese-inspired. 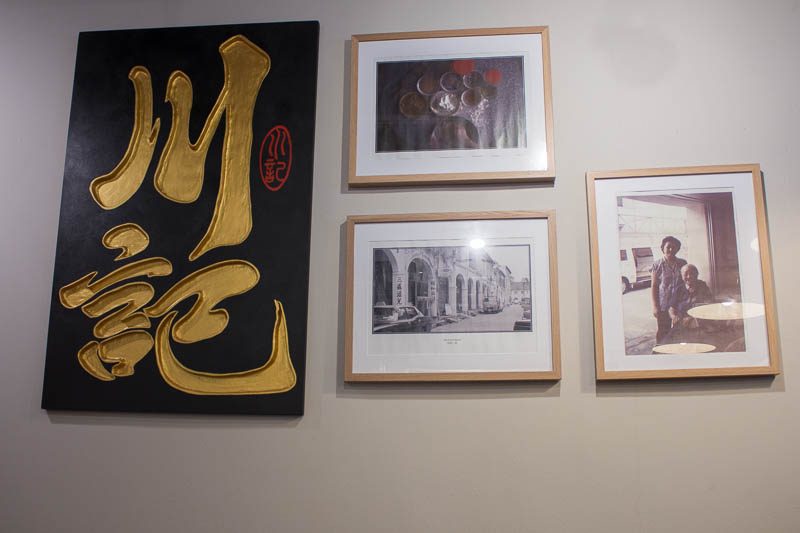 I managed to speak with the owner, Chong Suan, who is a third-generation descendant of Nam Tong Lee, whose business operates along Purvis Street. He mentioned how the recipe came from his grandmother, who brought it all the way from Hainan in 1926. Funnily enough, these biscuits cannot be found in Hainan island itself, similar to the other Hainanese-style food items. When she passed on, they stopped making them.

His mother only started remaking them from their Toa Payoh home in 2013, taking orders from family and friends. Chong Suan took leave from his full-time job during the festive periods to help his mother out. However, due to limited kitchen space, it was difficult to continue the business from home.

He then made the bold decision to leave his stable engineering job and devote all his time to keeping this tradition alive. Chong Suan spoke with gusto as to how much this meant to him. He even participated in the Singapore Heritage Festival, which he proudly displays the certificate of appreciation at the counter near the storefront. Participants of the festival were able to mould their own biscuits to bring home. I observed the customers that dropped by when I was there. Most of them seemed very chummy with Chong Suan, whereby he told me they were customers that became friends. Even though it was my first visit there, there was this wave of comfort at Chuan Ji Bakery Hainanese Delicacies that made me feel right at home. Of course, knowing more about Chuan Ji Bakery Hainanese Delicacies also made me look forward to trying out their food. I went ahead to order their signature Hainanese Flaky Biscuit (S$2.80). 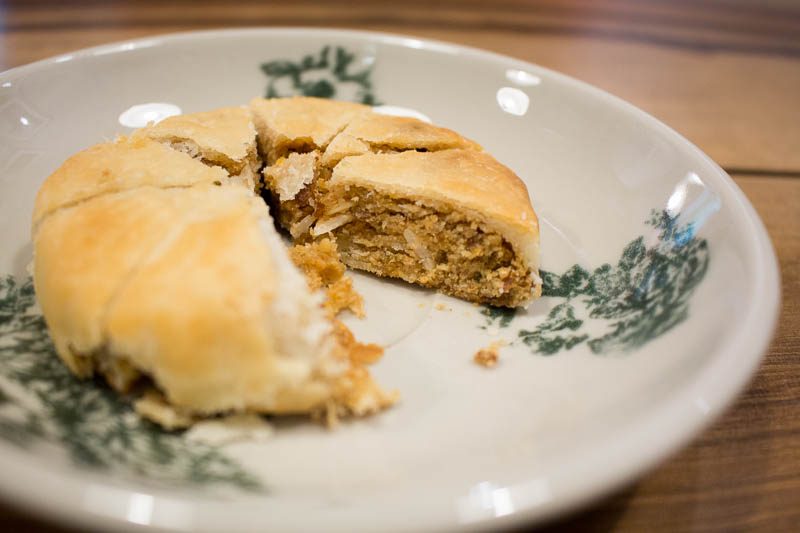 I didn’t know what to expect as I have never had this before. At first glance, it reminded me of tau sar piah with its flaky exterior. However, the taste was very different as it did not have that floury texture derived from beans. They were freshly baked, with a light and delicate skin. 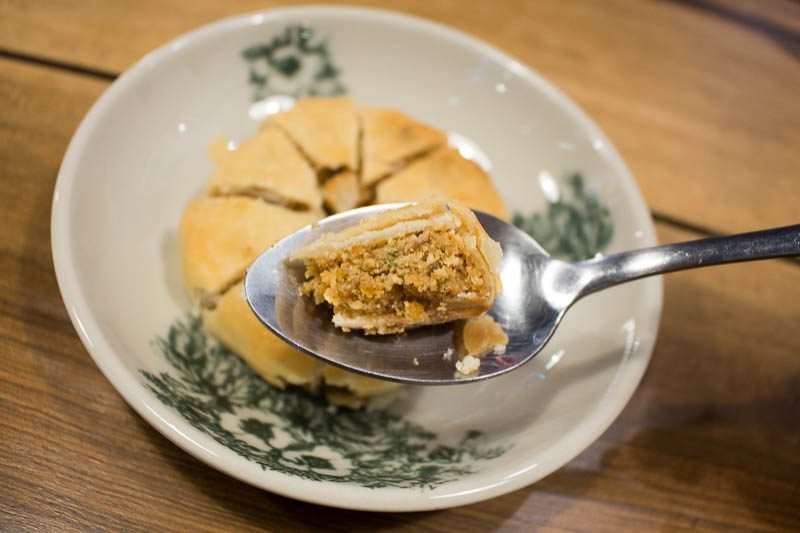 Taste-wise, it was intensely flavourful for something that was seemingly light. It even had this umami taste to it, perhaps derived from the various spices. While the skin was flaky, the filling was packed tightly.

The filling reminded me of a mix between a salty tau sar piah and mixed-nut mooncake. It had the savoury element from the seasonings and shallots, as well as a nuttiness from the seeds used. 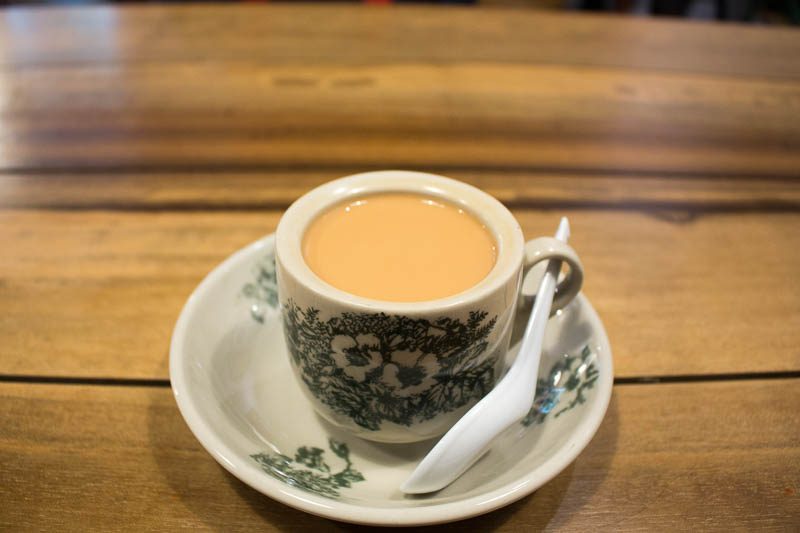 I had the biscuit with a cup of Hot Teh C (S$1.20). Chong Suan explained to me the difference between Hainanese teh and normal teh was that it tends to be creamier, reminiscent of milk tea. I am definitely one who loves bubble tea, so anything similar is always a plus in my books. Hence, I decided to go for it.

Indeed, it was creamier than usual with a distinct tea taste that I appreciated. Not only was it fragrant, but it wasn’t too sweet as well, making it easy to drink. 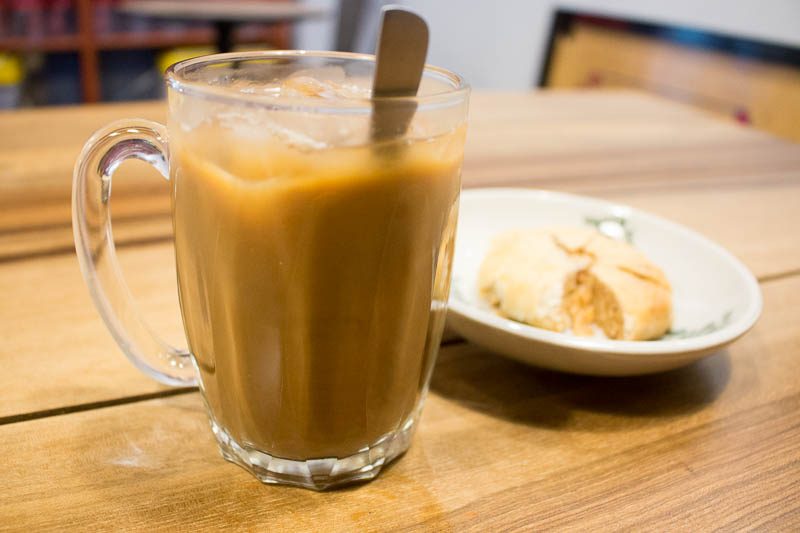 I also got an Iced Kopi (S$1.50), which had a nice aromatic roast to it. The amount of condensed and evaporated milk was well-balanced too. However, I did feel the addition of ice diluted the taste a fair bit. I would definitely recommend getting their hot drinks instead. 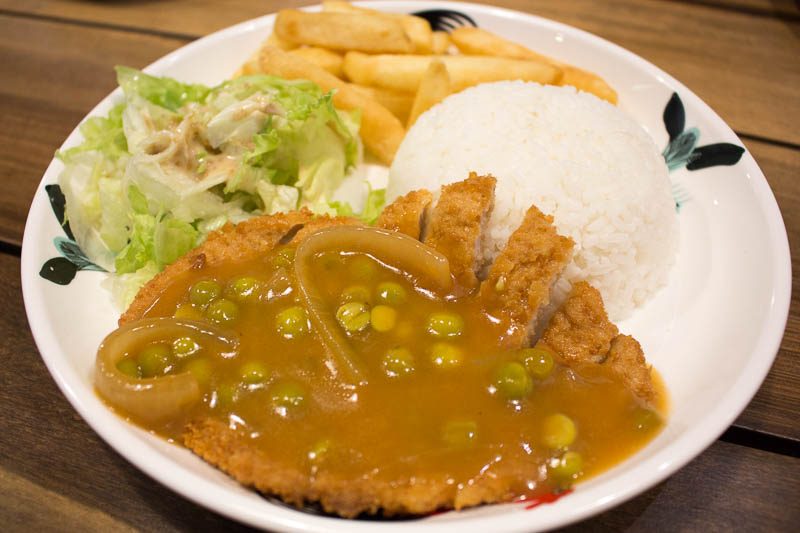 The Pork Chop With Rice (S$6.50) impressed me more than I thought it would. To be honest, when it arrived, I didn’t have high expectations. I have had many disappointing renditions of Hainanese pork chops before. Furthermore, the light colouration of the sauce wasn’t the best sign.

However, what they lacked in looks definitely made up in taste. The sauce was a perfect balance of sweet and sour, packed full of flavour. 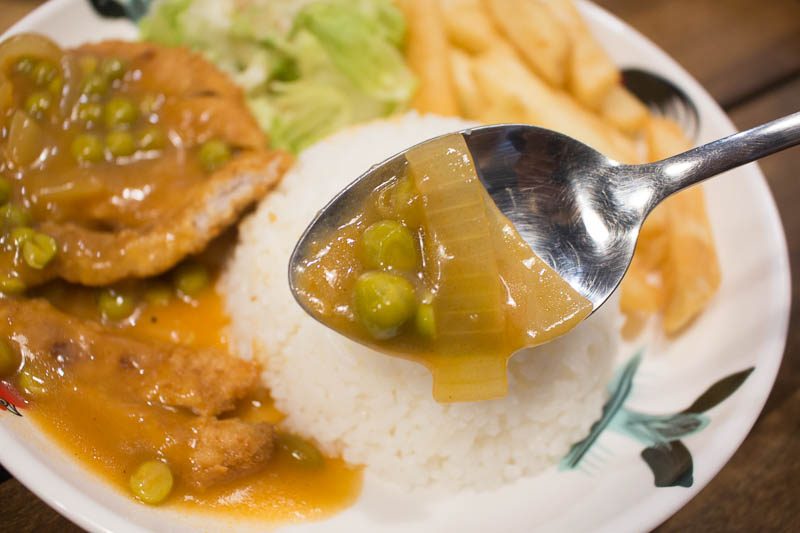 Despite that, it was still light on the palate which made it very appetizing. It wasn’t overly starchy and sweet like most places. I liked that the vegetables were appropriately soft and I found myself wanting seconds immediately. 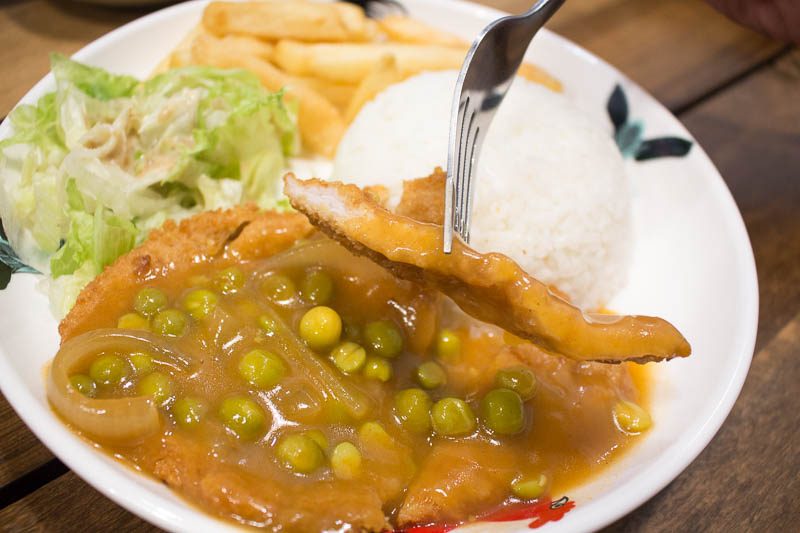 The pork cutlet was crisp on the outside, succulent on the inside. The breading itself was really tasty, perhaps due to the use of pounded biscuits. 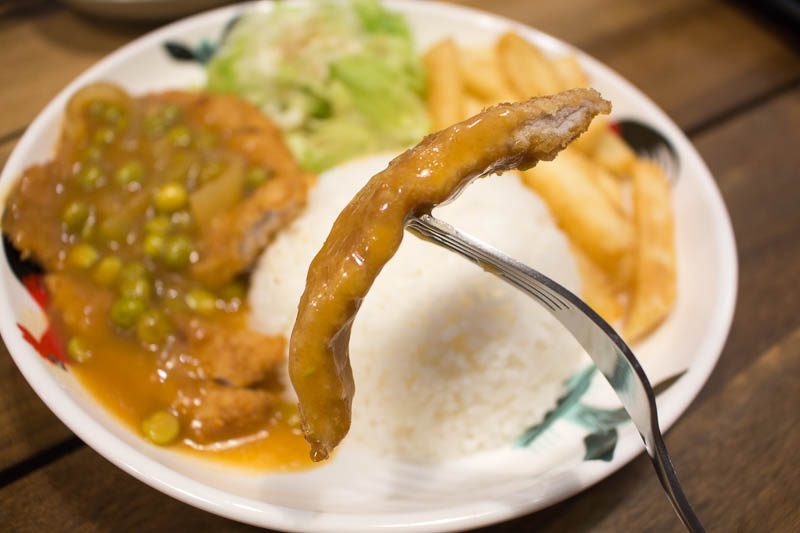 It gave a subtle saltiness, which complemented the meaty pork. I left it out for a while, and the breading turned slightly soggy as it soaked up the sauce. Surprisingly, it was still delicious and not at all jelak. 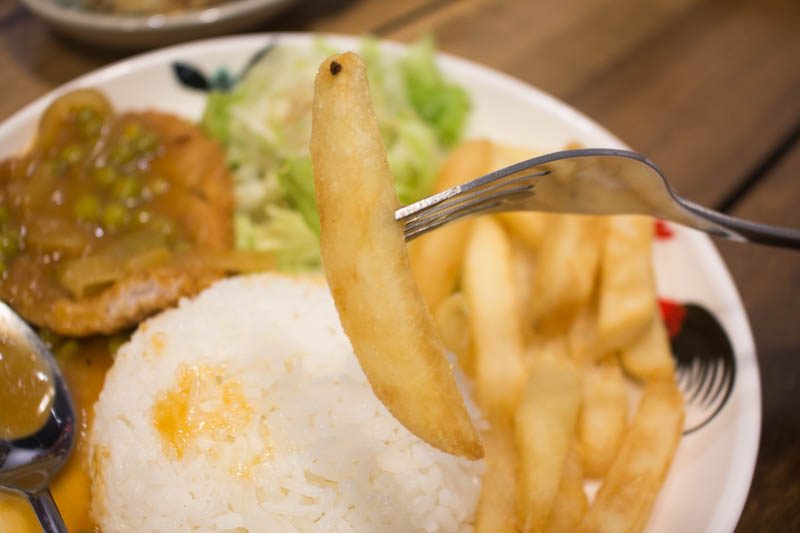 This dish was served with rice and fries, but nothing much to shout about here. I was glad the thick cut fries were crisp with a fluffy interior, although they could do with more seasoning. It also came with a side salad, to cut through the heaviness of everything else. 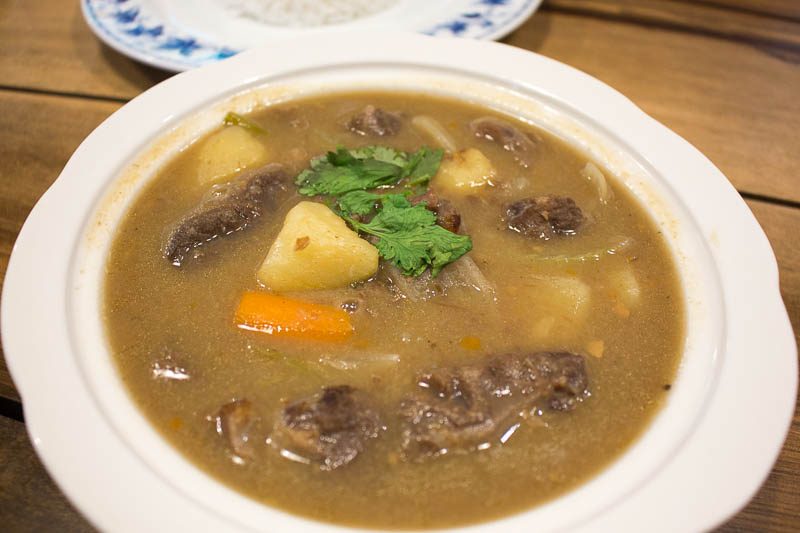 We also got the Beef Stew (S$6.50), and I was curious about the difference between the Hainanese and Western rendition. Chong Suan mentioned that the latter tends to be richer and heavier, usually with the usage of cream. 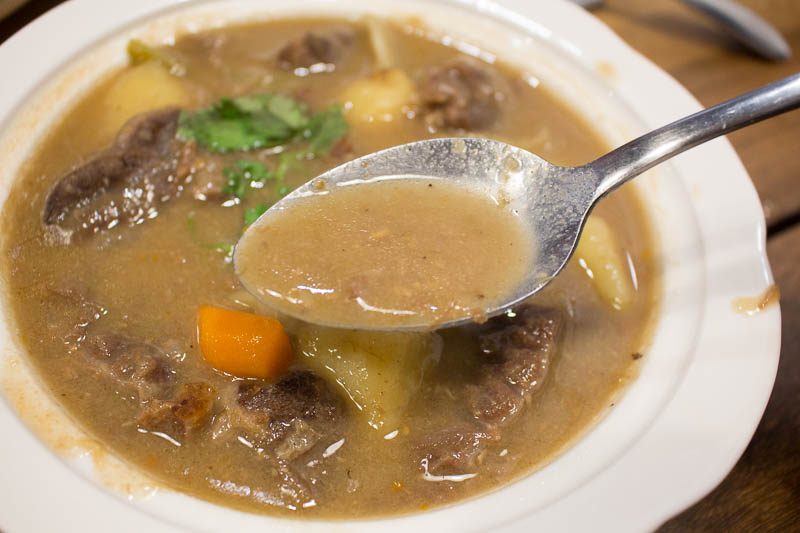 Indeed, this Hainanese version of Beef Stew was slightly watered down in terms of consistency, but packed with flavour nonetheless. There was a herbal tang to it, which reminded us of bak kut teh.

Due to the immense amount of beef chunks in the broth, there was also a gamey taste to it, but nothing too overwhelming. The richness of the broth gave a warm and comforting vibe, perfect for a pick-me-up. 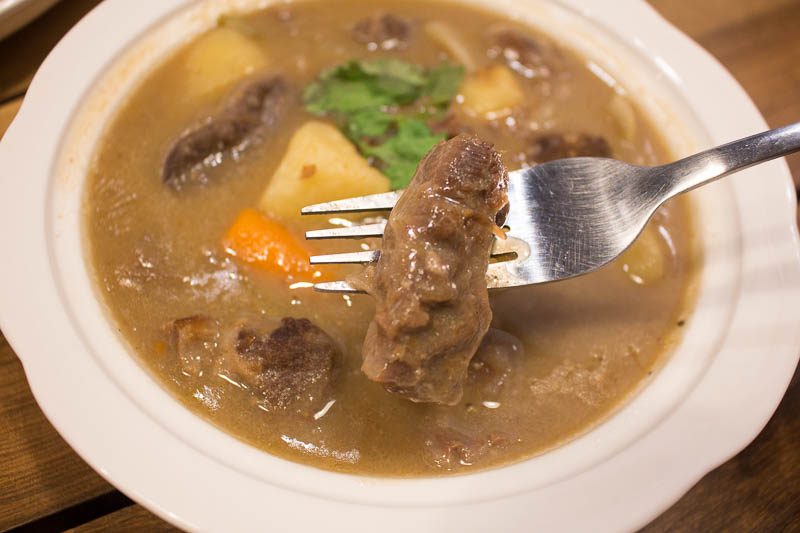 It came with many huge chunks of beef that were melt-in-your-mouth tender. They were flavourful on its own, but were further intensified when coupled with the broth. It was a tad too salty for my liking on its own, but when paired with the rice, it helped to balance out the flavours. Besides the generous amount of beef, there was a variety of mixed vegetables in the stew too. Potatoes, onions, leeks and carrots were cooked down. It provided a hint of sweetness, which made this a very wholesome dish. 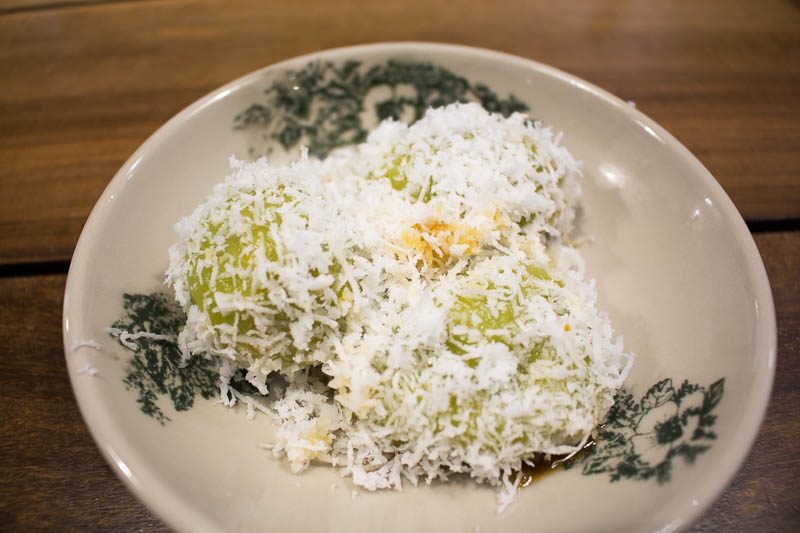 I love kuehs and decided to go with the Kueh Ondeh Ondeh (S$1.50 for 3 pieces) for dessert. I was pleasantly shocked when it was served warm, as most places tend to premake them.

Here at Chuan Ji Bakery Hainanese Delicacies, they make the kueh‘s upon order. Definitely more tedious on their part, and more waiting time on ours, but totally worth it. The Ondeh Ondeh skin was extremely soft and tender. I barely had to chew for it to disintegrate nicely into my mouth. It was warm and sweet, with a substantial burst of gula melaka in the centre. 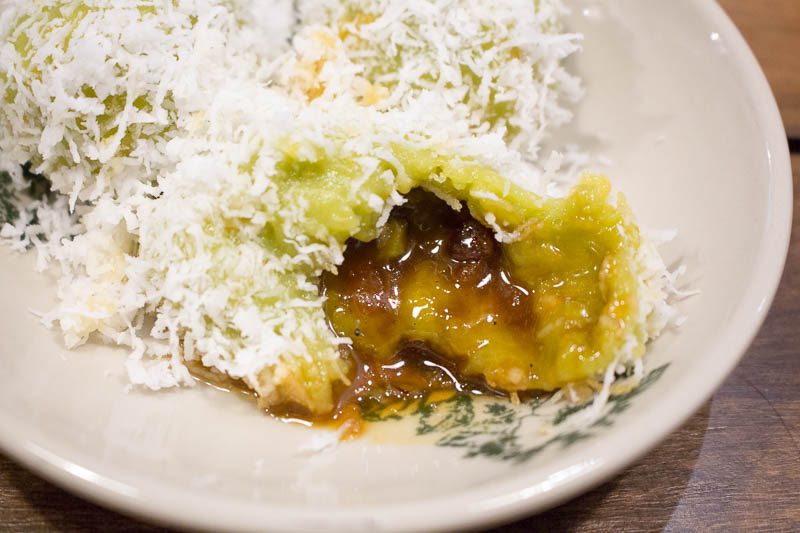 The deeply caramelised sugar complemented the simple skin, which aided to alleviate the rich sweetness. It was absolutely delightful. I liked that there were no lumps of hardened sugar in the filling, just pure molten goodness. The freshly grated coconut helped to round up the kueh nicely by giving a dimension of nuttiness.

My only gripe was that I wish they had more bite to them. Although I must say, they did harden up a lil’ as they were left to cool. 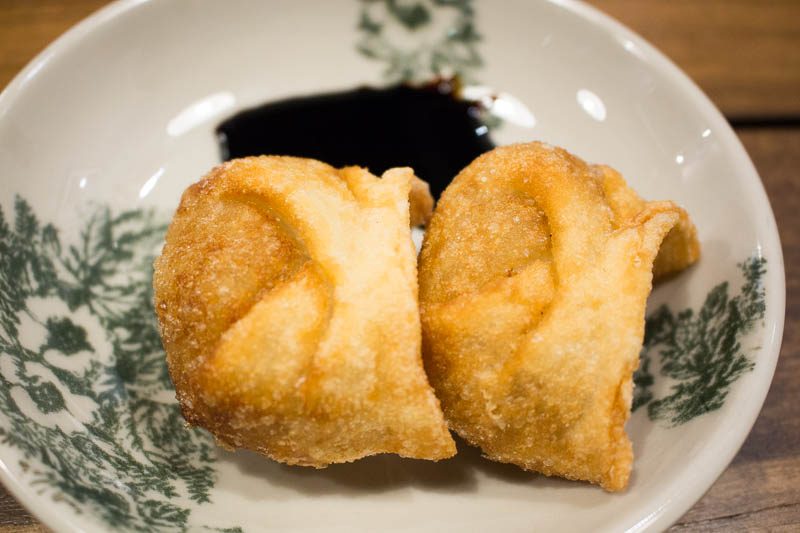 We also got the Fried Soon Kueh (S$1.20 for 2 pieces). I was intrigued as I have only tried steamed ones before. They came in bite-sized pieces, which would make for a perfect tea time snack. They took a traditional favourite and put a twist to it, and it turned out well. I liked how the skin had two different textures. While the top layer was fried perfectly for a nice crunch, the bottom layer remained soft and chewy. I liked how there was a substantial bite to it. 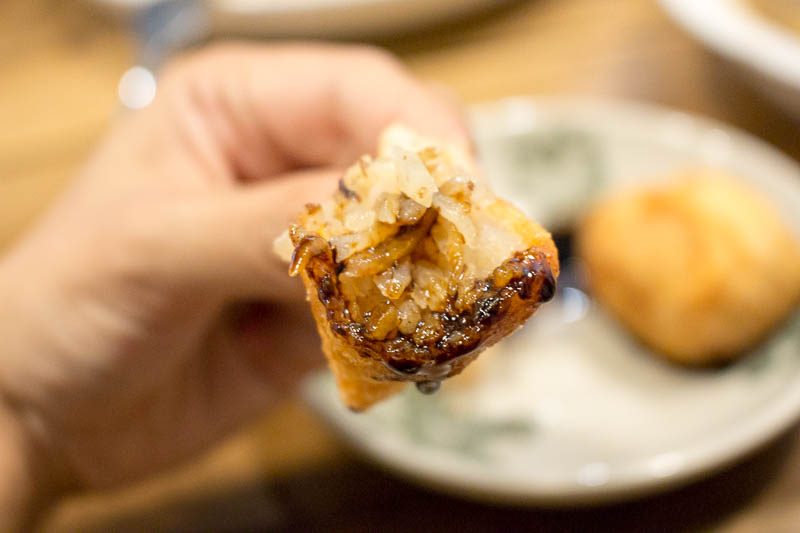 The filling was made predominantly of turnips, bamboo shoots and carrots. They were still juicy and crunchy despite being deep fried. Dipped into the sweet sauce was a delightful combination of sweet and savoury. 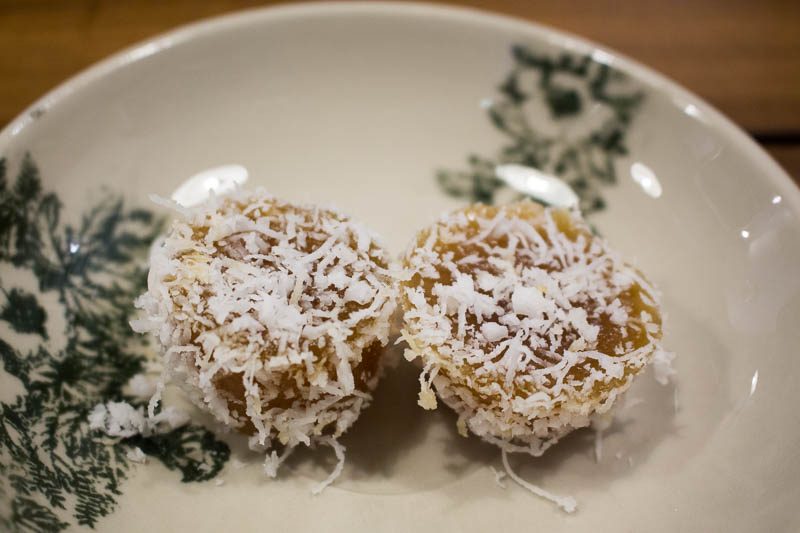 Lastly, we got the Kueh Ko Swee (S$4 for 10 pieces). Similar to the Kueh Ondeh Ondeh, these were also soft but slightly chewier which I preferred. These had a distinct gula melaka taste to them, for a touch of sweetness. Most places that I have had kueh ko swee tend to be bland and one dimensional. I would say this was one of the best I’ve had.

Chuan Ji Bakery Hainanese Delicacies isn’t your ordinary bakery or cafe that has saturated the F&B scene. They have stuck to their roots, offering traditional yet unique dishes that aren’t commonly found.

Despite my lack of exposure to their culture, I actually enjoyed the food here very much. Those who wish to delve into the rich heritage of Hainanese cuisine would love it here. Otherwise, their delicious offerings are still worth a visit!