My bias for Da Paolo Group is enduring and with fervour. I cannot recall when my family started patronising their cafes, but a good portion of our Sunday dinners would include their lasagna, with a finish of tiramisu. It’s hard to believe it’s celebrating its 30th anniversary and to mark the milestone, the birth of Da Paolo Dempsey Restaurant & Bar came to fruition.

The Dempsey Hill area is scattered with notable cafes—many that I’ve enjoyed during my childhood and residence in the West. But now, I have even more reason to endure the journey, in spite of my latest dwellings in the North-East. One step into Da Paolo Dempsey and you can’t ignore the overhanging olive tree that lords over the premise. Great effort has been submitted to preserve the trunk of a real olive tree, which makes this ornament commendable and impressive.

Diners have the opportunity to gawk at Da Paolo Dempsey’s offerings while awaiting their order, from their pasta display to their Italian cheese and cured meat case, and to even their varied assortment of gelato. While all their Da Paolo Gastronomia cafes offer gelatos, their widest selection is here at Da Paolo Dempsey. I think I surprise myself the most when I realise I’ve never tried their gelato before, always opting to sink my teeth into their pastries instead. I find it highly intriguing that across Da Paolo Group’s concepts, they offer three different types of pizza. The rendition at Da Paolo Gastronomia is thin, crisp and served in convenient-to-consume rectangular sizes, while Da Paolo Pizza Bar serves a fluffy thin-crust version that is worthy of my top five favourite pizzas in Singapore.

The pizza at Da Paolo Dempsey is a persona of its own, created with semolina flour and crackles upon delicate manhandling. The 8 Cheese (S$35) (yes, you read that right, EIGHT CHEESES) is an indulgent production of Sottocenere cheese with truffle, Taleggio DOP Valsassina, Stravecchio, mozzarella, Oro Rosso, Pecorino Romano DOP, Provolone, Gran Kinara, smoked date cream, truffled honey, and cracked black pepper (try saying that in a single breath). One would assume it’d prove to be luxuriously OTT, but the magic of truffled honey and smoked date cream pulled on the reigns before I could tire.

It’s thoroughly aromatic, pungent, and sweet, and the dough remained firm and arid no matter how long we set the pizza aside. As someone who’s lactose sensitive, I’d gladly re-order this even if it means jeopardising my gut health. Speaking of lactose, I stubbornly went ahead with Carbonara Calabrese (S$30), a spicy spin on traditional carbonara. With nduja (spicy no-case pork salami) thrown into the mix, the recipe still remains lean and straightforward. I revelled in how the silky sauce cloaked every strand of Spaghettoni del Leone, like a needy child unrelenting in his embrace. If you carry a penchant for decadent savouriness, this plate will appease your yearning. You might’ve spotted this in rustic Italian menus, and for good reason. There’s a sense of comfort that goes along a steaming bag of Seafood Linguine Cartoccio (S$34), regardless of whether you’ve had it before or not. Here at Da Paolo Dempsey, it’s a reliable and safe option that manages to sway my leniency. However, that just goes to show, you don’t have to bring out the bells and whistles to impress. The sauce is a symphony of sweet and acid, just enough to complement the fresh seafood, while the alluring aroma of basil lends the sauce rounded depth. Hopping on the humble train is the ever-reliable Spicy Italian Shakshouka (S$26). Loaded with skillet free-range eggs, homemade meatballs, chorizo, nduja, charred eggplant, chickpeas, and a side of sourdough toast, it’s a glorious mess that you’ll want to mop clean. Made for hearty brunches, this shakshouka won’t let you down, unlike that one friend who always shows up 30 minutes late. 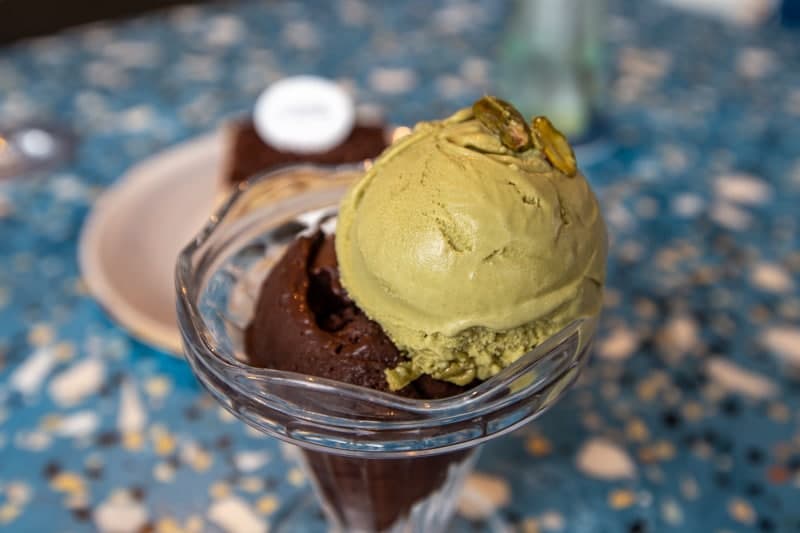 Now, I can go on and on about my unadulterated lust for Da Paolo’s cakes, in which my colleague and I gushed over in a head-to-head showdown. But it’s highly ironic that I’ve never had a taste of their gelato.

Diving straight into their richest selections, I enjoyed one scoop each of Dark Chocolate and Sicilian Pistachio (S$7 per scoop, S$25 per pint). The consistency and texture are unparalleled; silky as Tencel bedsheets, with a flavourful depth that I was surprised could come from a chilled dessert. If you have a penchant for either of these flavours, this is as pure as gets.

The Pistachio carried its familiar nutty bitterness, with only a mild sweetness to balance every spoonful, while the Dark Chocolate commands an unrelenting grip on your palate with its robust earthiness.

I never once doubted that my virgin visit to Da Paolo Dempsey would be a let-down, but I was fearful of exaggerating its excellence due to personal prejudice. Thus, there was rejoiced relief when I discovered for myself that yet another Da Paolo concept has proven itself, and that my unyielding faith in the brand is born of sound judgement.

So, to conclude, don’t take my conspicuous favouritism at face value; Da Paolo’s latest Dempsey Hill project is one to patronise and be enamoured.