Dian Lao Er launched their first store in Woodlands and has recently opened two new outlets. They specialise in individual claypot dishes and the menus across all three branches differ slightly. I had the pleasure of visiting their Ang Mo Kio outlet and proceeded to find the kopitiam which was along the road where the library and polyclinic are.

After walking past several furniture shops, I finally reached Nam Wah Coffeeshop and spotted Dian Lao Er at a corner. There were claypot options as well as various stewed soups on the menu. I was ecstatic when I spotted that Claypot Sesame Oil Chicken (S$6) was available here. My friends and I used to regularly patronise a hawker stall which sold this particular dish, but it has closed down and we’ve not been able to find another good rendition ever since.

Would Dian Lao Er be good enough? We shall see.

What I tried at Dian Lao Er If you’re looking to save some money, you can order from any of the three sets available. I went for Set B (S$13.80), which would give you an individual bowl of Claypot Yi Mian, Claypot Sesame Oil Chicken, a Soup of your choice, and a bowl of Plain Rice. I did the math and this set would save you S$1.70 as opposed to ordering each dish individually— it’s definitely value for money! My cravings were sending signals to my brain to go for the Claypot Sesame Oil Chicken first, and so I did just that. First things first, the visual appeal of the dish was so inviting. It was glossy and coloured in a dark brownish hue (indications that this pot of goodness might be potentially delicious)— I might be wrong though.

The claypot came with a generous serving of chicken cubes with skin and thick slices of ginger doused in the luscious-looking gravy, and topped with a sprinkling of spring onions. The chicken was extremely flavourful and tender, and I loved how the skin gave an additional dimension of creamy notes, which came from the fats. If I’d lost all my teeth, I would still be able to tackle this dish without much effort— that’s how soft the meat was! The gravy was robust in taste and I could pick up the subtle flavours of sesame oil which hit me at the end. I also tasted Shaoxing wine in the mix, which further enhanced the sauce.

I’m glad I added heaps of gravy onto my plain rice, which was the perfect accompaniment to the rich and flavoursome concoction. 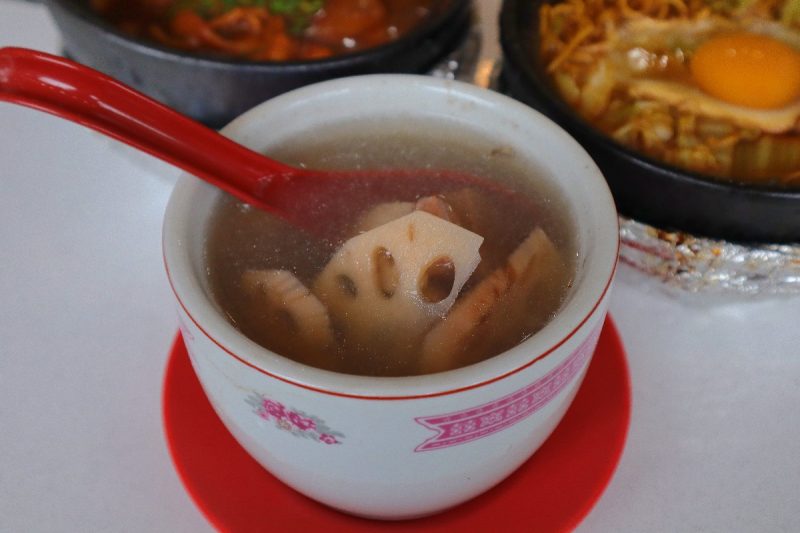 I chose Peanut, Lotus Pork Ribs Soup for my set. The soup had three large pieces of pork ribs, a few slices of lotus root, peanuts and a precious red date in it. I had a satisfying experience when the fats of the pork rib melted in my mouth as I was chewing on the tender meat— super shiok! The starchy slices of lotus root were soft and had a mild natural sweetness to it. The peanuts used for the soup were the large version. As a personal preference, I would have wanted smaller peanuts to be in my bowl of soup. In addition, they could have been boiled a little longer to make them softer. I picked up notes of salted vegetables as I was tasting the soup, which was a little unusual for a peanut soup. I’m usually not a soup person but this is one of the few varieties that I love having— probably why I’m so fussy about the taste.

I wished that there was a stronger peanut flavour to it as I felt that I was drinking a watered-down version of salted vegetable soup instead. I moved on to the Claypot Yi Mian which consisted of a generous portion of yi mian accompanied by slices of cabbage, tau pok, meatballs and an egg cracked atop (this reminded me of moonlight hor fun).

It was as though the egg had an inner voice which beckoned me to have a go at attacking it. I prodded the yolk with my fork and treated the bowl of yi mian like yusheng, tossing and mixing everything up enthusiastically like a kid. After the yolk had completely vanished due to the toss, it left behind a delectable creaminess which coated the noodles.

The pieces of tau pok acted like vessels in which the rich gravy landed in my mouth as I was chewing them. The slices of cabbage were slightly undercooked, adding a satisfying crunch to the overall mouthfeel of the dish. Everything was good until I had the meatballs. It tasted a little off, giving me the impression that they were frozen— it was a pity that this was the only item in the dish that pulled it down. I would give Dian Lao Er a revisit just for their Claypot Sesame Oil Chicken. It was wonderfully executed and the chefs know what they are doing for this dish.

Perhaps I ought to try their Claypot Chicken Rice (S$6) and other soup varieties on my next visit here. Do let me know your opinion when you’ve tasted them— I’ll be super grateful for it.