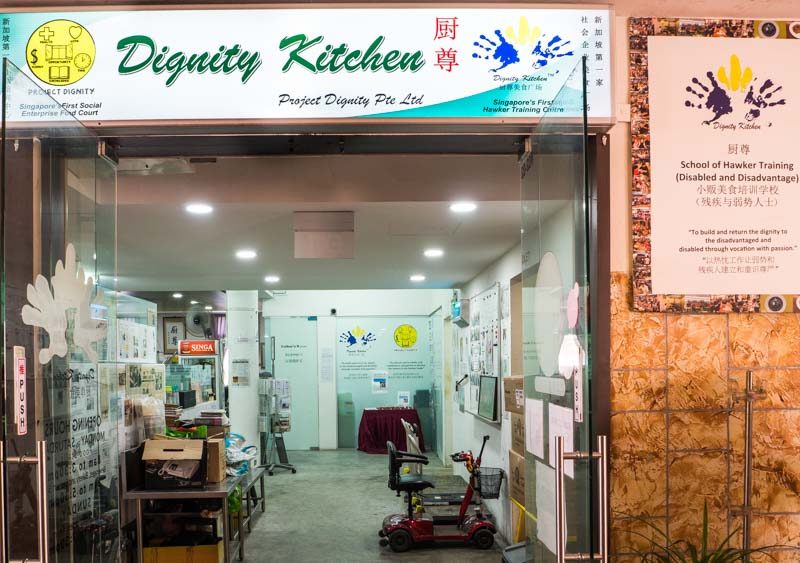 Dignity Kitchen is the F&B arm of Project Dignity, founded on October 10 2010 by engineer Mr. Koh Seng Choon, and is geared towards helping the disabled and disadvantaged regain their place –and dignity- in society and the work force. 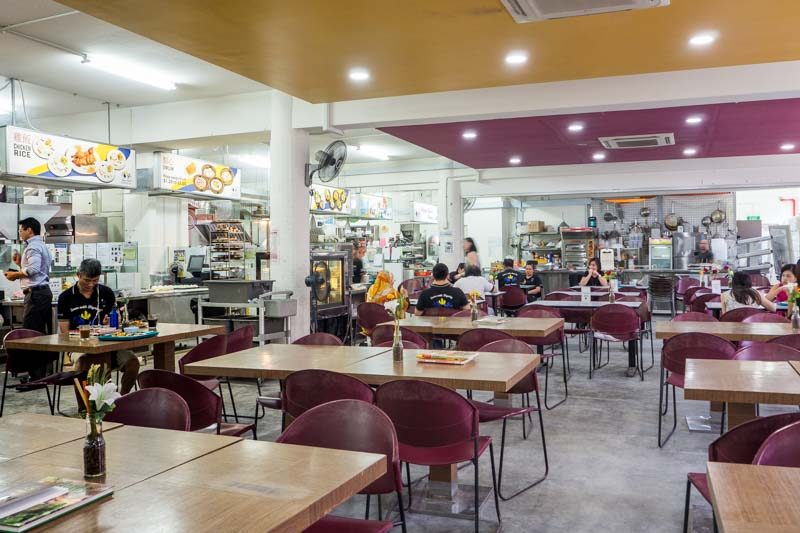 Previously at located at Balestier Road, then Kaki Bukit View, Dignity Kitchen’s latest address is at Serangoon. More spacious than ever, this third incarnation of Dignity Kitchen also conducts Project Dignity training classes, as well as cooking classes that are open to the public, using facilities at a corner of the food court. 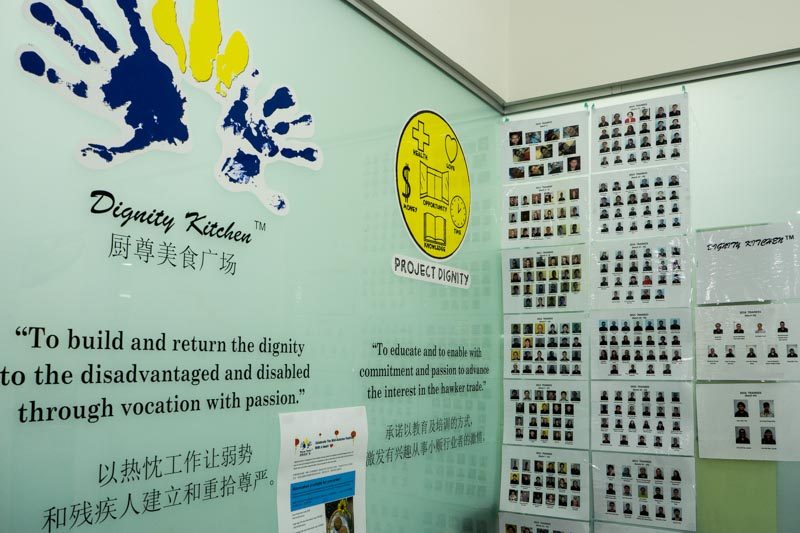 Members of the Dignity Kitchen programme can be anywhere from 18 to 60 years old, with some well over 70. Many who successfully graduate onto other jobs in the F&B industry have their face and name printed on a wall at the corner.

Over the duration of their stint at Dignity Kitchen, they receive culinary training and man the stalls at the fully functional Dignity Kitchen food court, with the help of unique tools and methods to circumvent whatever difficulties they may face. 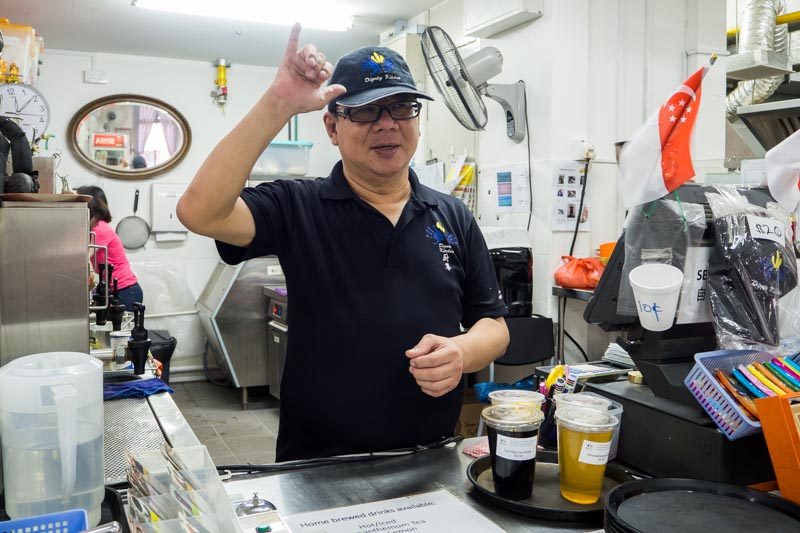 One of the most evident examples is the drinks stall, manned by the jovial, hearing-impaired Uncle Foo, Uncle Peter and Lisa. At first glance, the stall appears generic, but a closer look reveals the many special traits it possesses. While Uncle Foo can lip-read, customers can also opt to order by simply pointing to the photo chart, or attempt to follow the special guide present and ask for a cup of teh-c using sign language.

Should the staff be busy at the back, customers can simply press a buzzer on the counter, which will vibrate a device in their pocket, signalling them to revert their attention to the front. 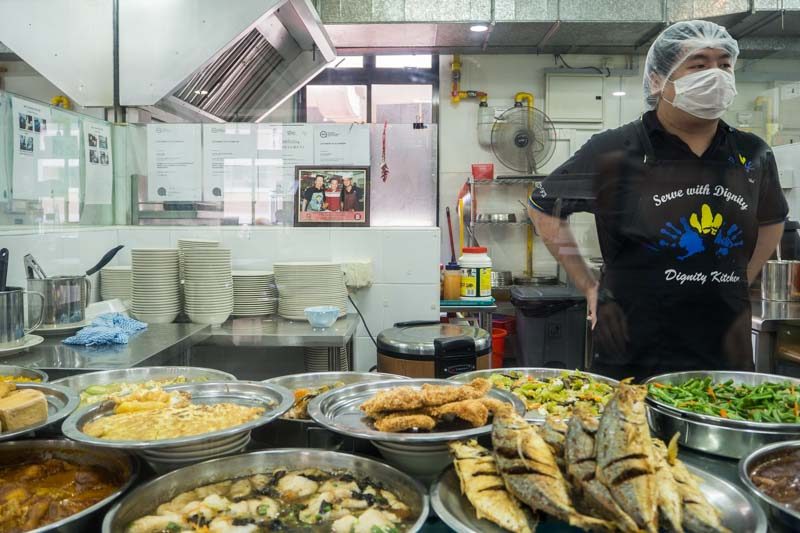 Unlike other mixed rice stalls where all leftover food are thrown away after a few hours to maintain hygiene and prevent food contamination, Dignity Kitchen’s stall employs an electric-run glass panel at the bottom beneath the metal dishes. This special piece of NEA-approved equipment is developed with technology similar to insulated plane windows, and allows the kitchen to minimise food wastage by maintaining a sufficiently-high temperature all day-long. 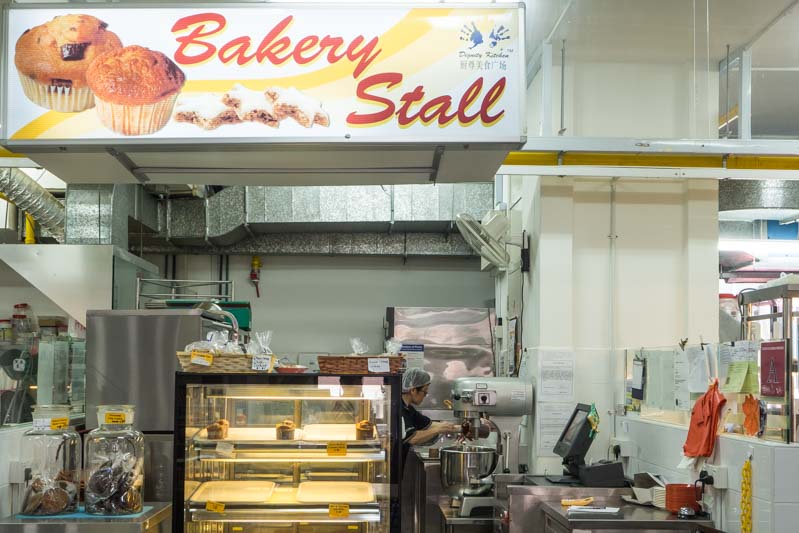 Another note-worthy stall at the Dignity Kitchen food court is the bakery, run by Madam Tay, who is deaf. Now a full-time staff at Dignity Kitchen’s bakery, she was previously unable to find employment outside due to her hearing disability.

The lone 60 year-old now dishes out fresh baked goods on a daily basis, with her muffin sales being the best among others. 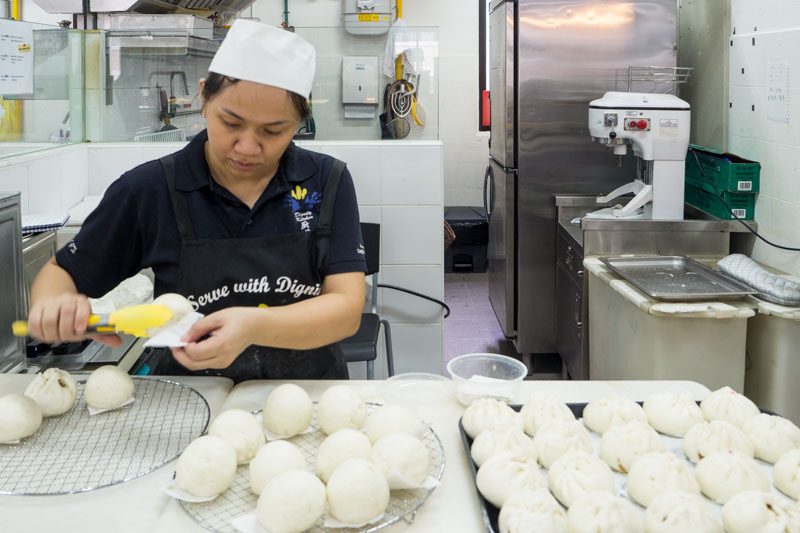 Dignity Kitchen’s dim sum stall used to be a western stall run by a kidney dialysis patient, which later got converted into its current form after the patient moved on to a stall in a primary school canteen, and staff subsequently received requests for breakfast offerings.

Trainees at the dim sum stall are trained by Chef Neo, who used to work for Red Star Restaurant but later quit his job after a stroke. The stall offers classic Singaporean Chinese bites such as siew mai, curry puffs, and different types of steamed buns.

Dignity Kitchen releases many festive specials throughout the year which are available for purchase in bulk as corporate orders, with all proceeds going towards their training fund. Their latest offerings are mooncakes, in accordance with the upcoming Mid-Autumn festival – which comes with its own unique twist. 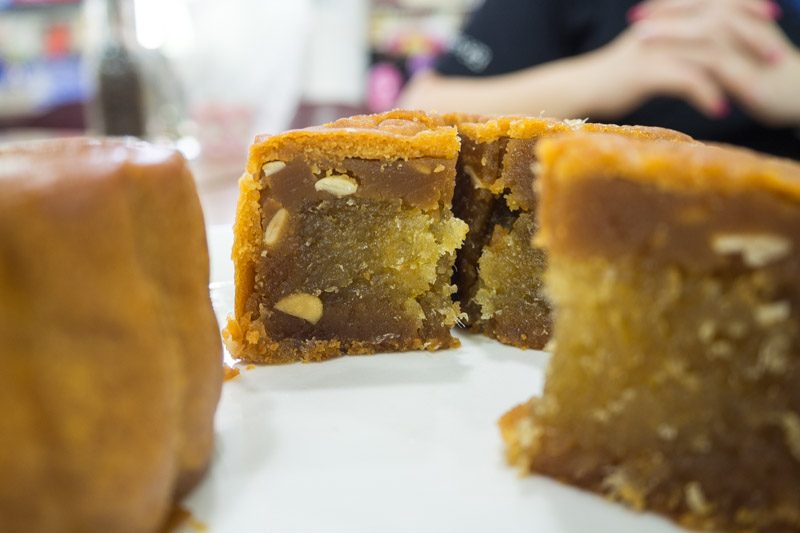 Their Vegetarian Golden Pineapple Lotus Paste Mooncake ($48 for 4 pieces) is a creation borne out of requests for fully vegetarian mooncakes. Developed by Dignity Kitchen staff through trial and error, they utilised the similarly-coloured pineapple as a substitute for the traditional salted egg yolk.

The pineapple filling is refreshing and slightly tart, which cuts through the sweet and smooth lotus paste and prevents it from becoming cloying, while the crust is fragrant and neither cakey nor too thick. Their execution of the classic Single Salted Egg Yolk White Lotus Paste Mooncake ($50 – 4 pieces) is also on par, with the salted egg yolk not being too dry or crumbly, and the lotus paste being decent enough to stand on its own without assistance from the pineapple filling.

While Dignity Kitchen’s mooncake selection is limited, and without fancier options such as snowskin or other exotic flavours, their offerings are in no way inferior in terms of quality. What better way to celebrate the Mid-Autumn Festival than giving back to society?

Dignity Kitchen also has other options available, such as the Double Salted Egg Yolk Lotus Paste Mooncake ($58 – 4 pieces) and $60 – 4 pieces). They are available for pre-order online at the Dignity Kitchen website by 12th September 2016.

People seem to only like half my name and it ain't nice. I also take pleasure in making people cry with my Instagram (@evilcinnamonroll) posts. Apparently a BMO sound-alike.

Previous articleThe Commons Bangkok: 7 Spots to Eat at Bangkok’s Trendiest Hipster Ground
Next article10 Best Tonkatsus in Singapore To Pig Out On