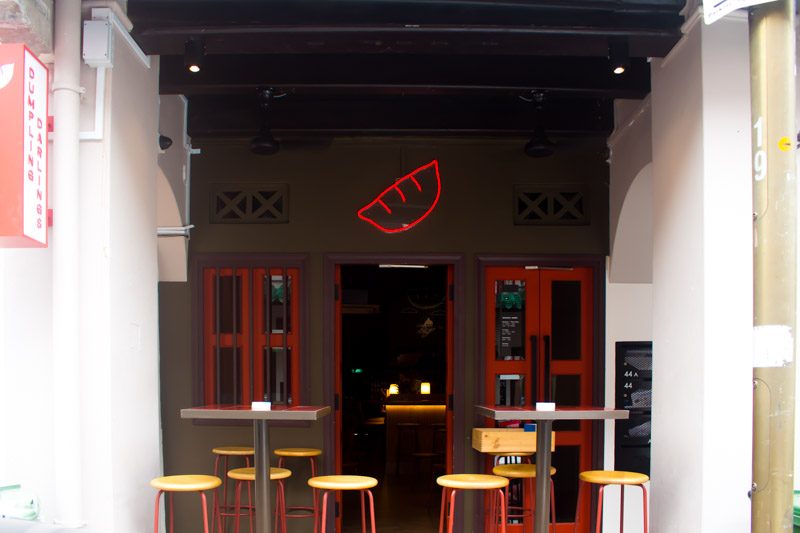 With various small restaurants popping up, it’s hard to keep track what’s out there, yet Dumpling Darlings stood out with their dark minimalistic exterior and simple logo.

This inconspicuous restaurant located on Amoy Street is opened by the people behind Lola’s Cafe, and they serve a variety of noodles and dumplings with unique flavours. The cosy interior looked like a typical Japanese bar, and the dim lighting makes it great for date nights.

We went for a late lunch instead, and got their Lunch Set (S$16) which includes a bowl of noodles, dumplings as a side dish and a drink.

I chose the Sichuan Pork Noodles and Smoked Duck Dumplings, with the Salted Plum Wolfberry Pu-Erh as my choice of beverage. My colleague got the Miso Mushroom Noodles and Fried Pierogi, accompanied by Grapefruit Thyme Strawberry Green Tea. We also got some Spicy Sichuan Dumplings (S$7) to share. 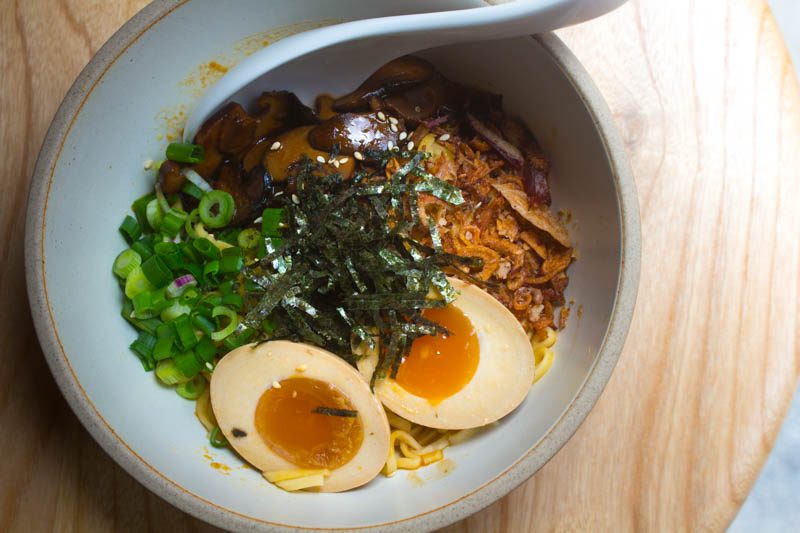 The Miso Mushroom Noodles was topped with an ajitama egg, fried garlic, shallots, spring onions and shredded nori. Although the dish was mostly umami, there was also a hint of sweetness from the seaweed. The mushrooms, fried garlic and shallots gave the dish an aromatic touch. The noodles were springy and had a unique texture which tasted like a mix between soba and ramen. According to the chef, the noodles are made in-house with only three main ingredients: eggs, flour and water.

Dumpling Darlings aims to replicate the elasticity of traditional noodles, but without using preservatives and MSG which tends to be quite drying. While I didn’t fancy the texture of the noodles, it definitely didn’t leave my mouth dry. 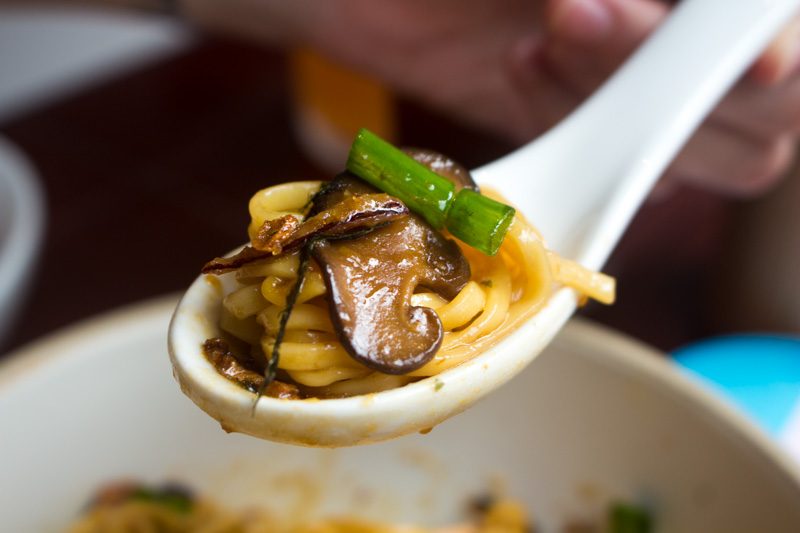 The mushroom noodles really reminded me of a vegetarian version of bak chor mee. Due to the fragrant mushrooms, I didn’t really taste much of the milder miso. However, the mushrooms were a little too salty for my liking, though the taste balances out when they’re mixed in with the noodles. 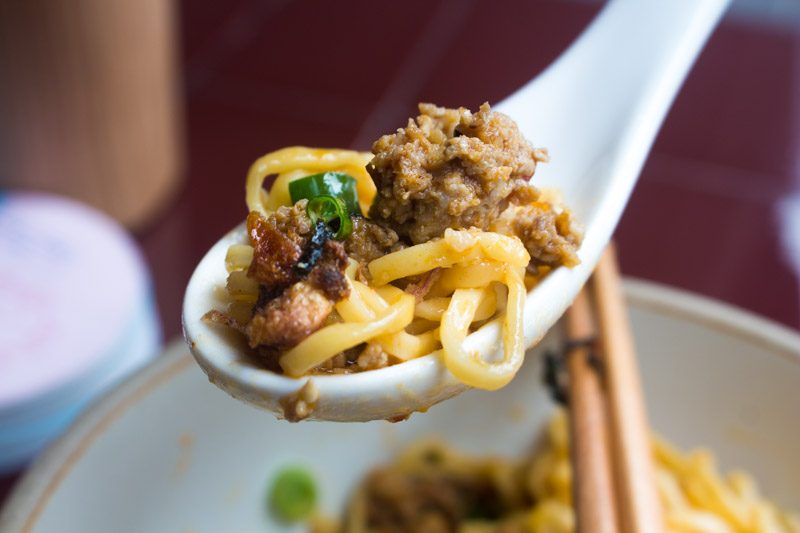 This dish was blander than the usual spicy pork noodles I’ve had. The noodles seemed to be just tossed in chilli oil, without peppercorns or bright red chilli bits. There wasn’t anything really special about the toppings, though there was a good amount of minced pork.

Overall, I felt that this dish was quite underwhelming. However, if you have a low spice tolerance, this would be suitable for you. 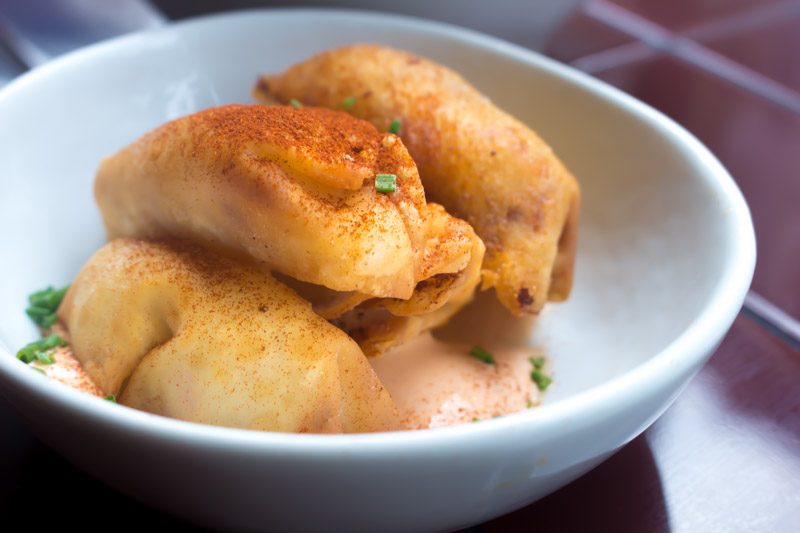 Our lunch sets also came with two small side dishes of dumplings.

The Fried Pierogi dumplings were fried to perfection, and the dumpling skin was crispy but not greasy. Filled with fluffy mashed potatoes, crispy bacon and cheese, they were delicious but a bit too jelak.

I could barely finish the four dumplings, which were basically carbs on carbs. I found it way too heavy for my liking. 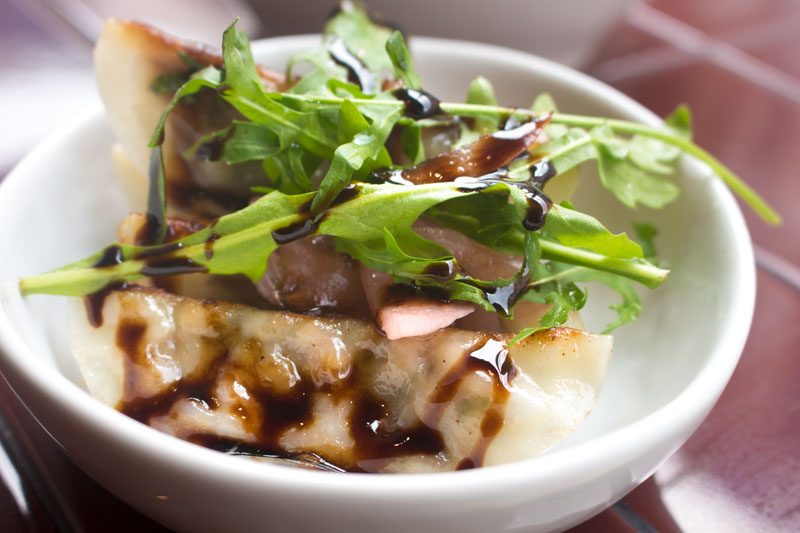 The other dumpling side dish that we got was the Smoked Duck Dumplings, which I really enjoyed. Served in the style of pan-fried gyoza with homemade sauce drizzled on top, and sprinkled with onions and fresh arugula, these dumplings were UHH-mazing. 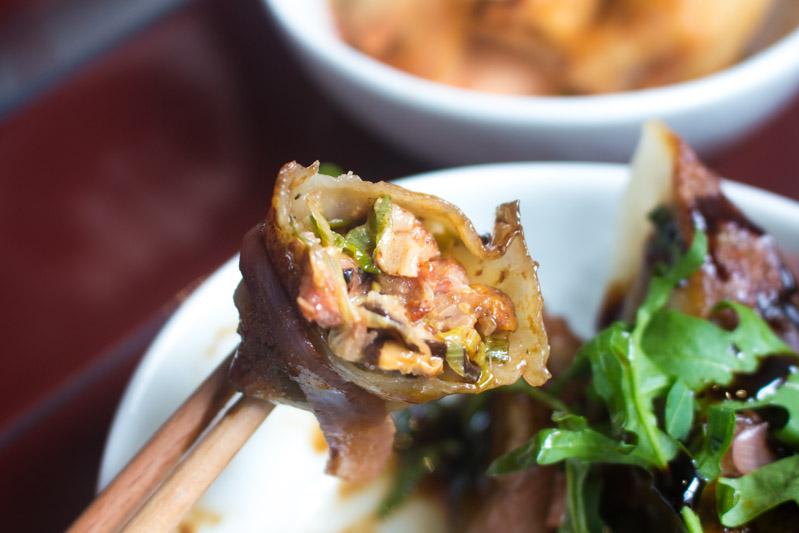 Each dumpling was filled with big chunks of savoury and juicy duck meat and topped with a semi-sweet dark sauce. It was the perfect match of sweet and savoury! Not to mention, the refreshing arugula on the top also acted as a palate cleanser.

This combination of crispy gyoza skin, tender smoked duck and refreshing arugula reminded me of when I took my first bite of Peking duck wrap in Beijing. I’d highly recommend ordering the Smoked Duck Dumpling when you visit Dumpling Darlings. We were quite impressed by their unique dumplings, so we wanted to try their original dumplings too.

The moment the Spicy Sichuan Dumpling (S$7) was set down on the table, I was hit with an overpowering smell of chilli oil. You’d think that the chilli oil would be extremely flavourful but unfortunately, it was bland and boring.

However, the dumplings were delightful, with fragrant and juicy filling. Even the skin of the dumpling was just the right amount of thickness. 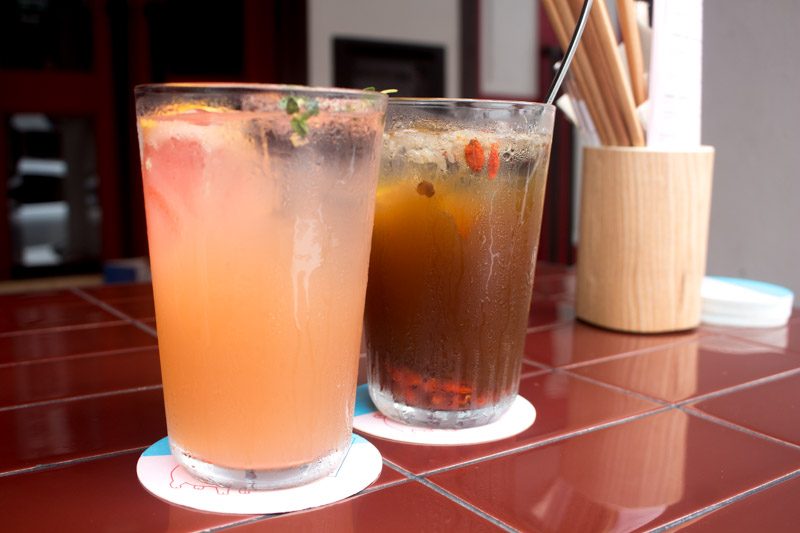 If all that eating made you thirsty, you can quench your thirst with some of their iced teas.

The Grapefruit Thyme Strawberry Green Tea was perfect as a palate cleanser after the heavy meal, because of how zesty the grapefruit was. The sweet strawberries also balanced out the slight astringency from the green tea.

My favourite was the Salted Plum Wolfberry Pu-Erh. This drink was slightly salty due to the salted plum and the aftertaste was both sweet and sour because of the wolfberries. It’s definitely a refreshing touch on a hot summer day.

Dumpling Darlings is a good hangout spot for small groups, with innovative dumplings and reasonably priced dishes. However, certain dishes were mediocre and I wished that they were more flavourful.

If you’re around Telok Ayer and you’re craving some dumplings, head over to Dumpling Darlings to try their Smoked Duck Dumplings! Dumpling Darlings also offers a variety of cocktails and they open till late, so you can head there for after-work drinks as well.

just here for some food.