Fancy a goblet of an Elixir of Immortality? Or what about trying a Love Potion? These are some of the intriguing concoctions available on Elixir Bar’s new alchemy-themed cocktail menu. Located on the second level of Orchard Shopping Centre, Elixir Bar is part of multi-concept space KUVO. If you’re here just for drinks, take a seat at the bar counter to watch the new Head Mixologist Vladyslav Buzko work his magic. 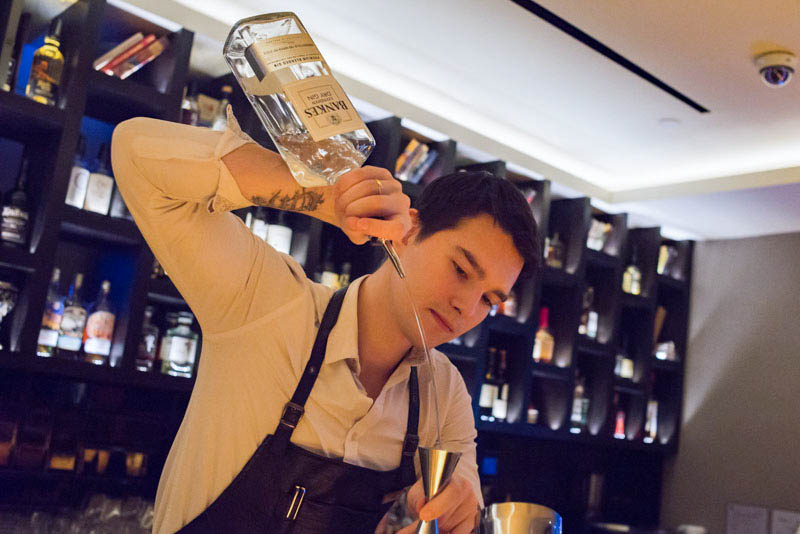 24-year-old Vlad’s new menu is split into five different categories: Happiness, Beauty, Life, Luck and Courage. And if you’re surprised by ingredients like Heart of Swan and Slime of Snail, you can refer to the legend on the menu to find out what it actually is. (Hint: Heart of Swan is actually strawberry pieces.)

We tried a total of seven cocktails, so you can imagine what state we were in when we finished the drinks. There’s something for everyone here, be it strong drinks or light fruity cocktails! I also really liked the presentation of the cocktails, especially the goblets and glasses that they were served in. Vlad sources for them himself, and keeps their origin a secret.

We started with the lighter drinks, from the Elixirs of Beauty. Aphrodite’s Secret ($23++) is a gin-based creation served in a gorgeous goblet. Only fitting for the Greek Goddess of love and beauty, after all. 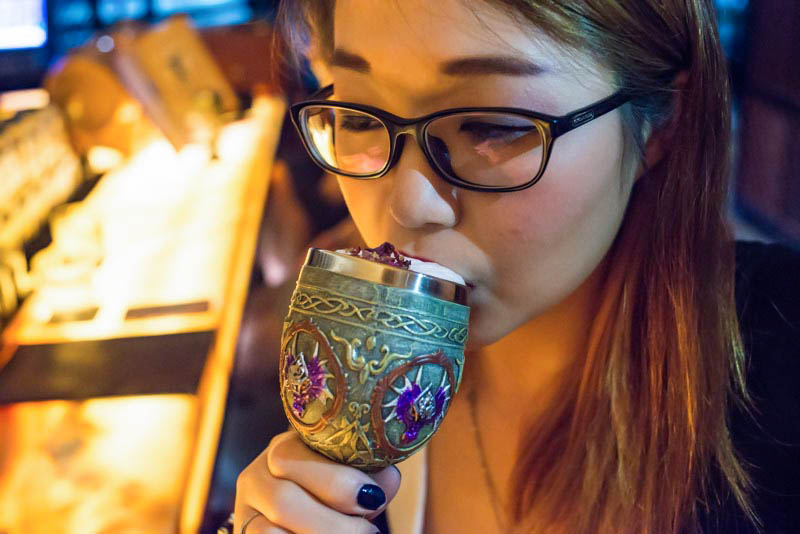 The cocktail was quite sweet, with a hint of citrus from the lime juice. It was topped with egg white foam like the sea foam Aphrodite emerged from, as well as some dried rose petals. This added a strong floral fragrance with every sip. If you like fruity and light cocktails like Cosmopolitans, you’ll like this! 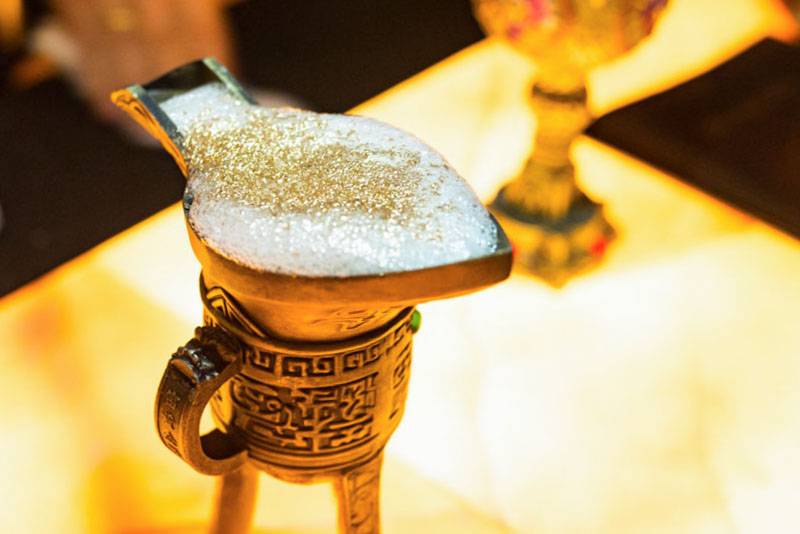 Another light cocktail we tried was the Beauty of Nefertiti ($21++). This vodka-based drink came in a delicate tri-legged Egyptian chalice. To add a feeling of luxury, the drink is actually topped with decadent gold dust. Look at how beautiful it looked under the light! 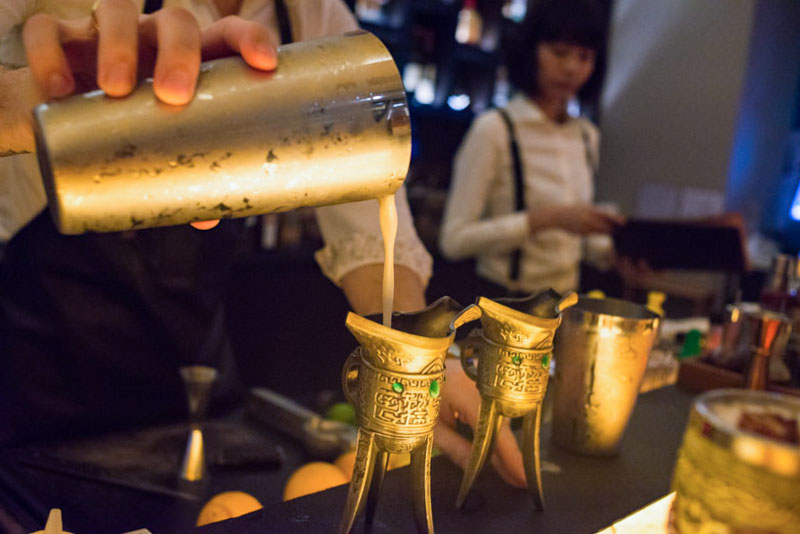 Vlad scorched the marshmallow in front of me before adding it into the drink. The mix of hazelnut liquor and toasted marshmallow resulted in a sweet and smooth drink. If you like Baileys, you’ll probably enjoy this drink as much as I did. 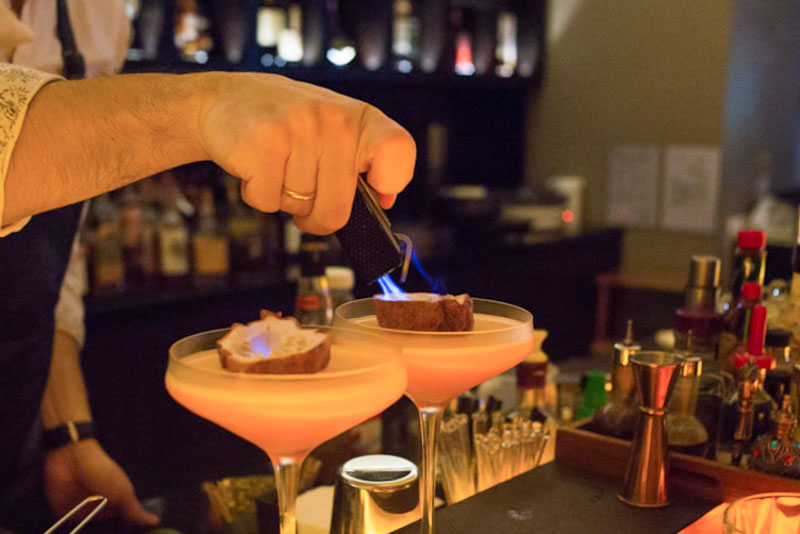 The third cocktail we tried was one of the Elixirs of Luck. Named Tykhe ($22++) after the Greek Goddess of luck, this tequila-based cocktail was fruity yet packed a punch. 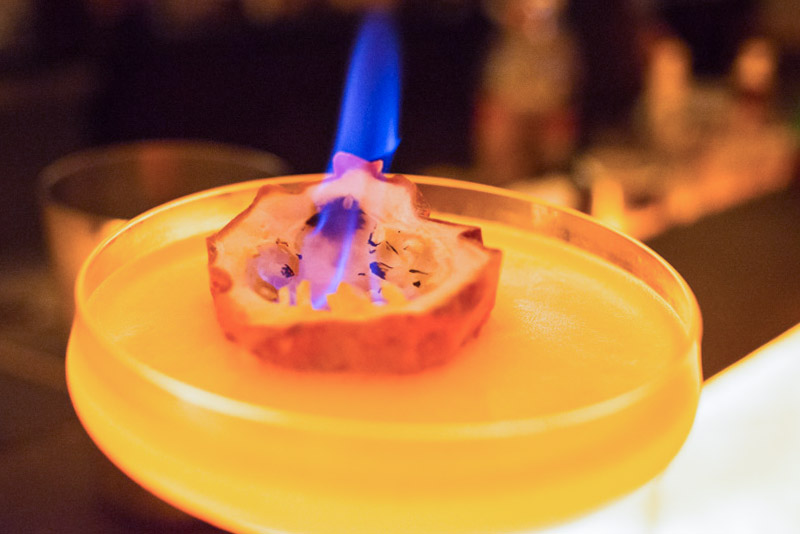 The dried passionfruit atop the elegant glass was set on fire before the drink was served. Another easy-to-drink cocktail, this went down smoothly with the tangy flavour of passionfruit. The drink had almost no hint of that alcoholic bite, but was actually quite potent. You’ve got to watch out for this one!

In hindsight, we should have ordered some food before we started drinking. Three drinks in, we decided to pause for some sustenance. Elixir Bar shares its kitchen with KUVO, so you can be sure that their culinary creations will delight your taste buds. 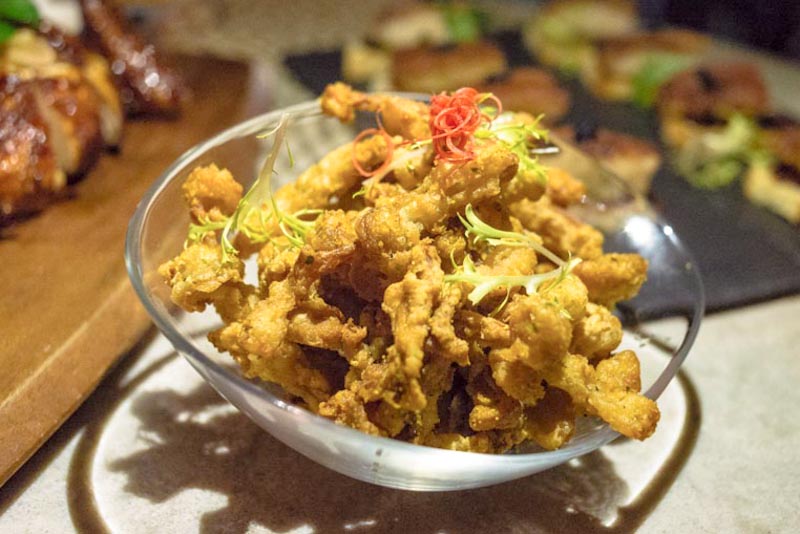 The Deep-Fried Honshimeiji Mushroom With Golden Crumbs ($8++) was extremely addictive. The light mushroom flavour went well with the crispy batter, and I could probably just polish off the entire plate on my own. 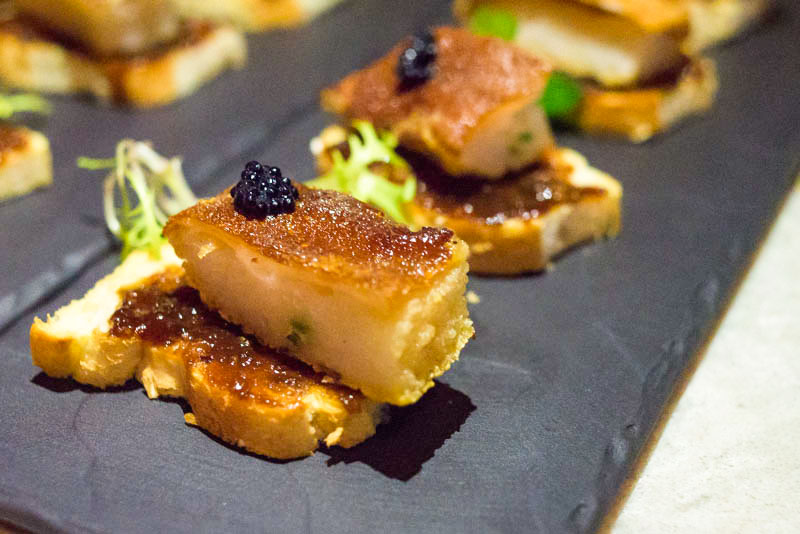 We also tried the Crispy Suckling Pig With Prawn Paste ($22++), a luxurious dish that’s topped with caviar. Chewy with a crispy exterior, the porky goodness from each slice lingered in my mouth. I really liked the Grilled Hokkaido Squid ($16++) too, which was served with sambal and lime. The pieces of squid tasted fresh and had a pleasing bite that wasn’t too chewy. I particularly liked the tentacles, which were a little crunchy.

Having lined our stomachs, it was back to the drinks! 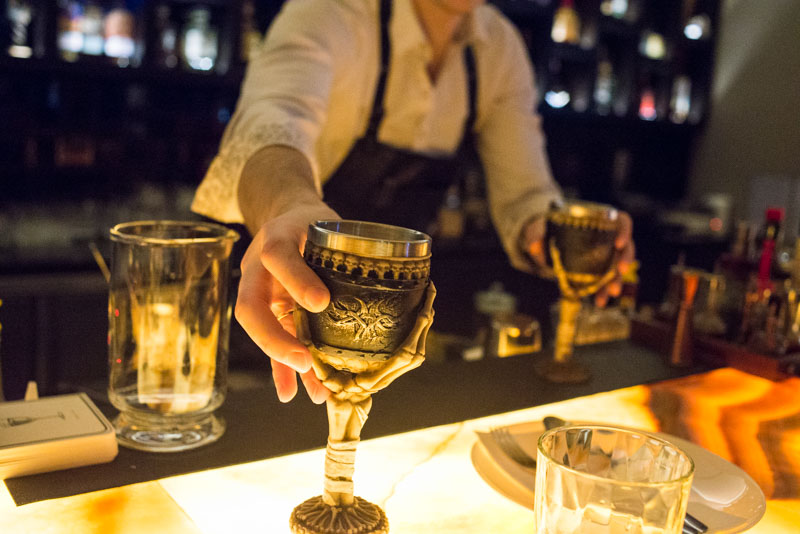 From the Elixirs of Courage comes Heracles Force ($23++). This cognac concoction had a surprising ingredient: ginseng.

The taste was quite interesting, especially with the sweet and nutty flavours of honey and walnut added to the mix. This was another pretty potent drink, so I’d suggest to take it easy with this. The Elixir Of Immortality ($24++) came in an impressive dragon goblet, and was lit with blue flames. Yes, this bourbon-based drink was literally lit!

The cloves gave off an enticing sweet fragrance after burning. The drink itself had a faint raspberry taste but was otherwise mostly sweet. My favourite cocktail of the night was the Anubis Potion ($26++), one of the Elixirs of Life. Served in a jar shaped like the Egyptian jackal god, this cocktail was made with Monkey Shoulder whiskey. 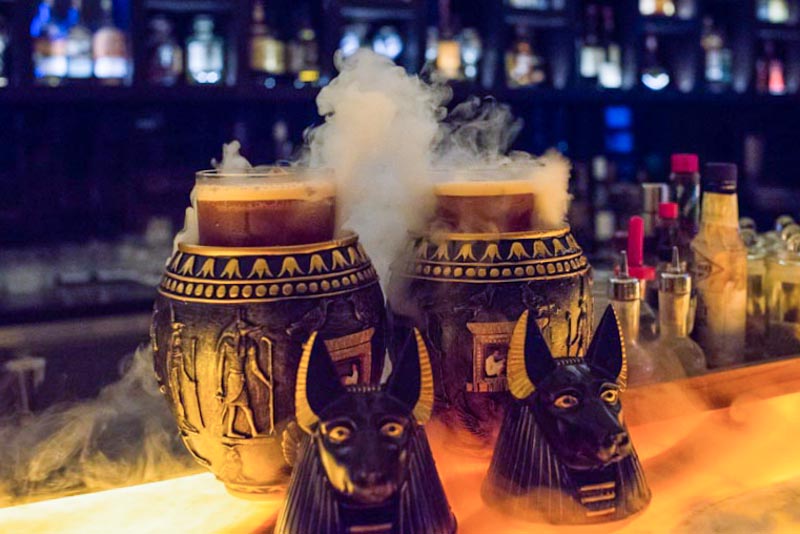 The jar was actually “smoking” from the dry ice, which helped to keep the drink chilled. With chocolate bitters, cranberries and chocolate powder, this cocktail was surprisingly sweet. Monkey Shoulder is a blended malt whiskey, which went very well with the rich and bittersweet chocolate. 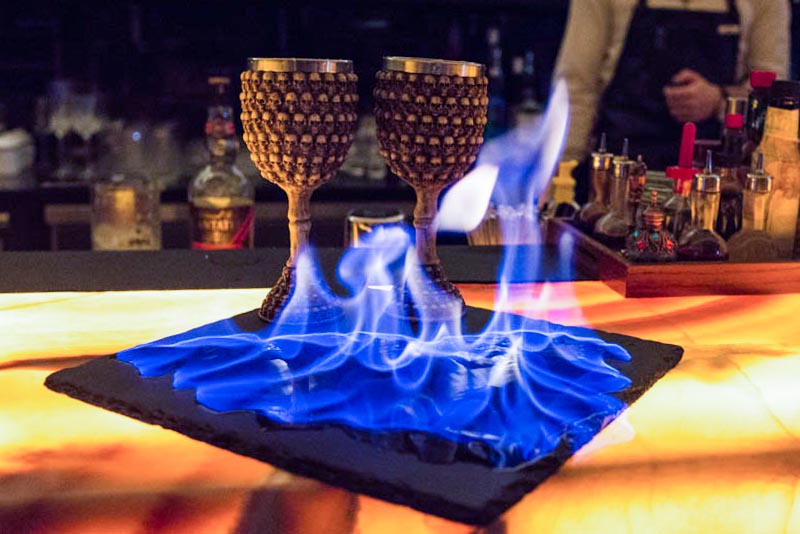 Finally, the hardest hitting drink of the night: Jupiter ($26++). It seems only fair that this king of drinks was named after the Roman King of Gods. Made with cognac and Dom Benedictine, the concoction also contains surprising ingredients, such as Parmesan cheese and black caviar. 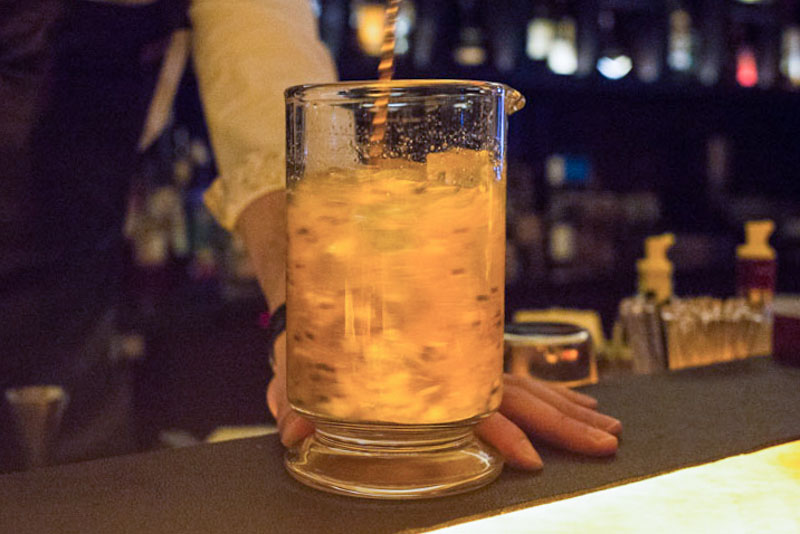 The thought of savoury components in a cocktail could seem a little off-putting to some, but this superbly-mixed drink worked well. The savoury notes came out in the aftertaste, while the drink was mostly dominated by the potent flavour of the Dom.

This is definitely not a drink for the faint of heart. Drink responsibly, because this could possibly knock you out! If you’re looking for a chic new watering hole, pop by Elixir Bar for a night of drinks you won’t forget. It certainly doesn’t hurt that the talented Vlad is a superb mixologist who’s easy on the eyes too. (Sorry ladies, he’s happily married!)

Previous articleBring Glory To Your Neighbourhood At This Cook-Off Competition At Hong Lim Park On 28 Mar
Next articleGet Your Hands On Häagen-Dazs’ Limited Edition Frozen Yogurt Flavours & More!