Everybody loves fried chicken, there’s no denying that. For me, a crispy, juicy and tender piece of fried chicken always hits the spot. So when I heard about a stall in Geylang Bahru specialising in chicken dishes, I bolted down to check it out. A new entrant in Geylang Bahru Market & Food Centre, Golden Chick’n Bento (金鸡便当) is run by a family of three.

Hao Wei, a university undergraduate, helps his parents out at the stall for about two days a week. We were really lucky to catch him on the day we were there. We were intrigued by the fact that his father, the owner-cook of the stall, was once a restaurant chef. It turns out that Hao Wei’s father has been in the food industry for over 20 years! He wanted to try something different for a change, so he decided to become a hawker. 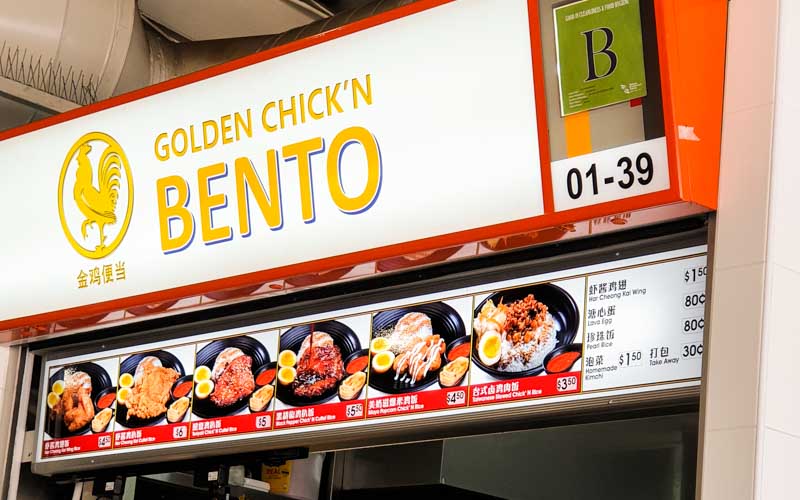 But I wondered why, of all meats, did they choose to only feature chicken? Apparently, it was simply because it’s the easiest meat to handle. 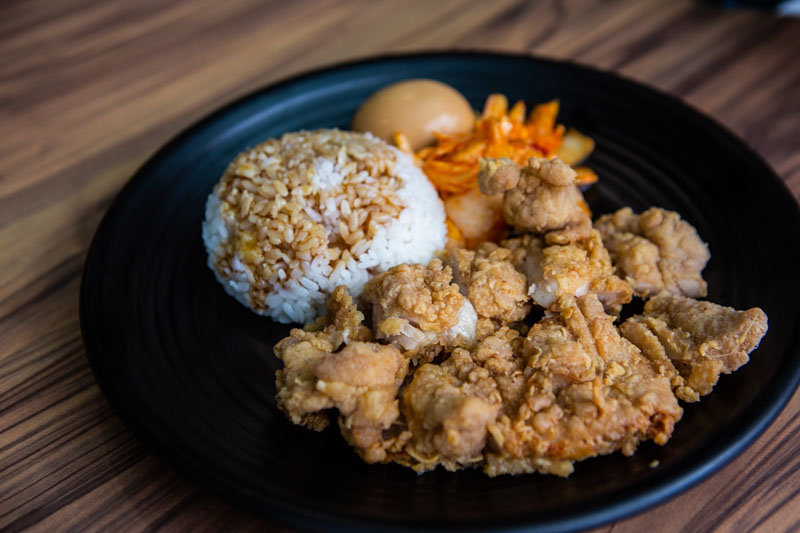 Golden Chick’n Bento serves up a total of six dishes currently. What we were looking forward to the most was their Har Cheong Gai Cutlet 虾酱鸡扒饭 (S$6). 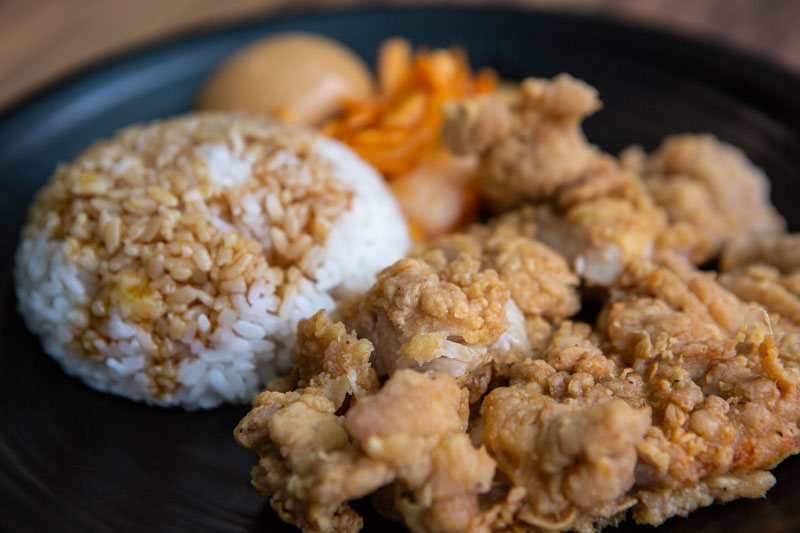 They double-fry the chicken cutlet so that it’ll be extra crispy and sizzling hot upon serving. We were glad they did because the batter was indeed remarkably crunchy. 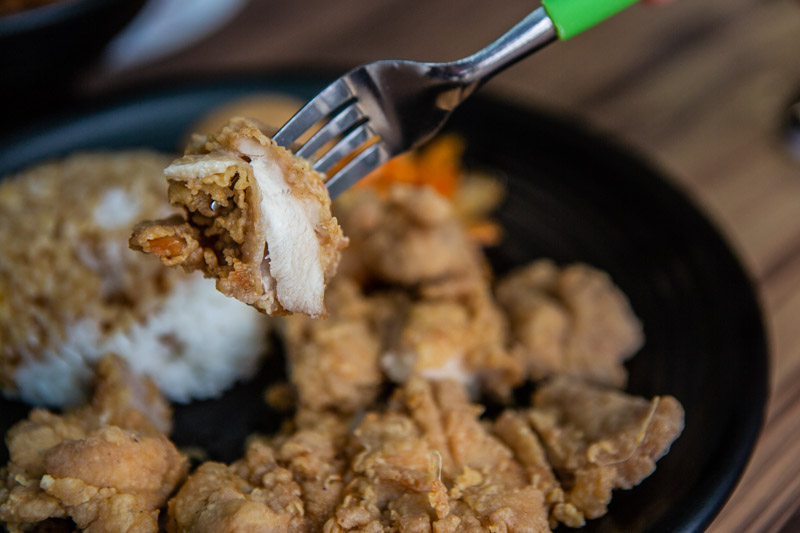 Not only that, but the thick chicken meat was also satisfyingly juicy.

Unfortunately, the flavours fell short of our expectations. We were hoping that the saltiness of the har cheong (prawn paste) would come through strongly. However, instead, there was only a lingering hint of umami essence which we tasted at the end of every bite.

It turns out that they only marinate the chicken meat and not the batter. No wonder the batter was lacking the har cheong flavour and looked slightly pale in colour.

Hao Wei also explained that a significant number of their customers are from the elderly community. Hence, they’re very wary about how strongly they flavour their dishes. 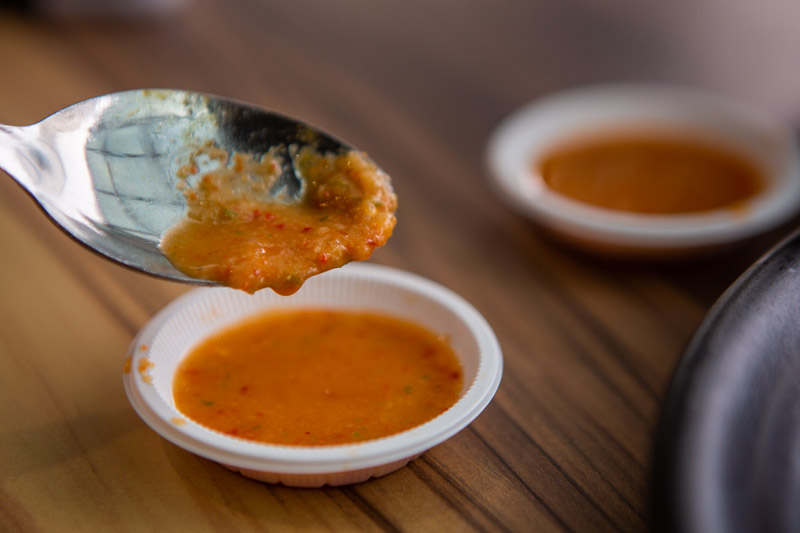 Fortunately, the stall serves up a really fragrant chilli sauce, which is actually homemade! With a pinch of sourness and a kick of spice, we felt it was reminiscent of the chilli that usually comes with chicken rice. 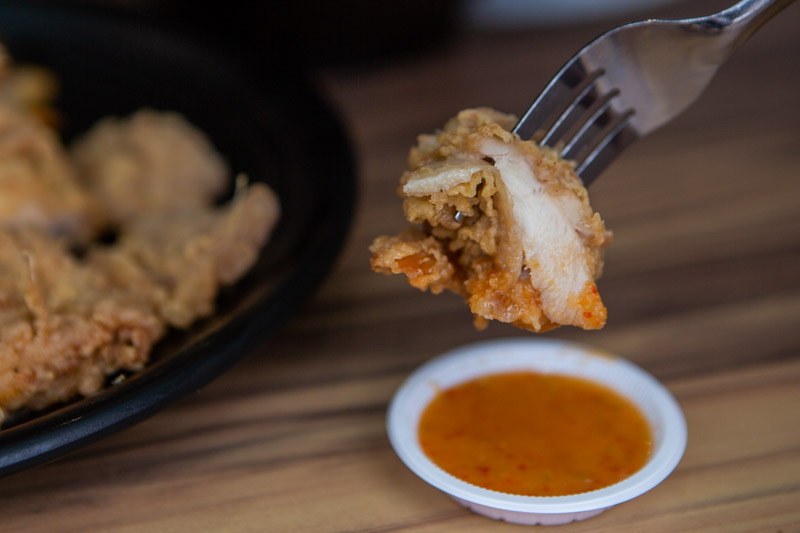 It definitely managed to give the fried chicken a much-needed flavour boost! 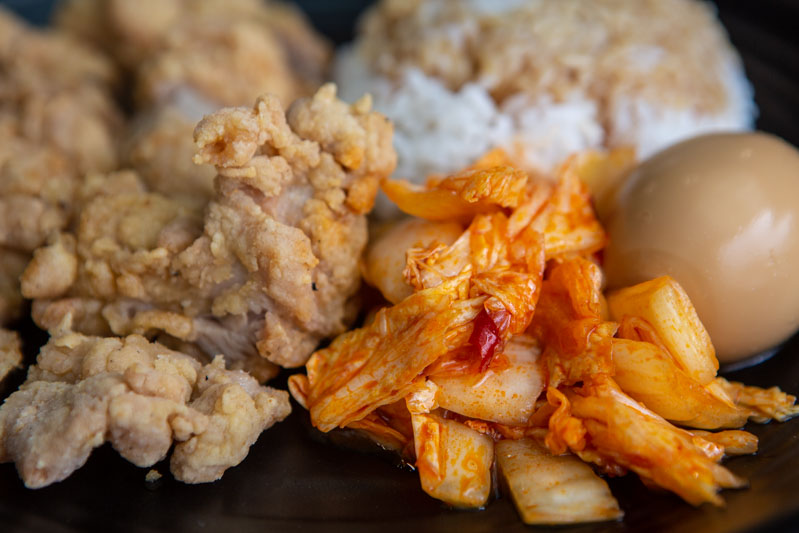 The dish also came with a side of their Homemade Kimchi 泡菜 (S$1.50 a la carte). We appreciated that they made their side dish from scratch but, sadly, it didn’t manage to impress our taste buds. While the vegetables were indeed fresh, crunchy and moist, they were lacking the quintessential fermented flavour of kimchi. Luckily, they still packed a punch of spice, so not all was lost. 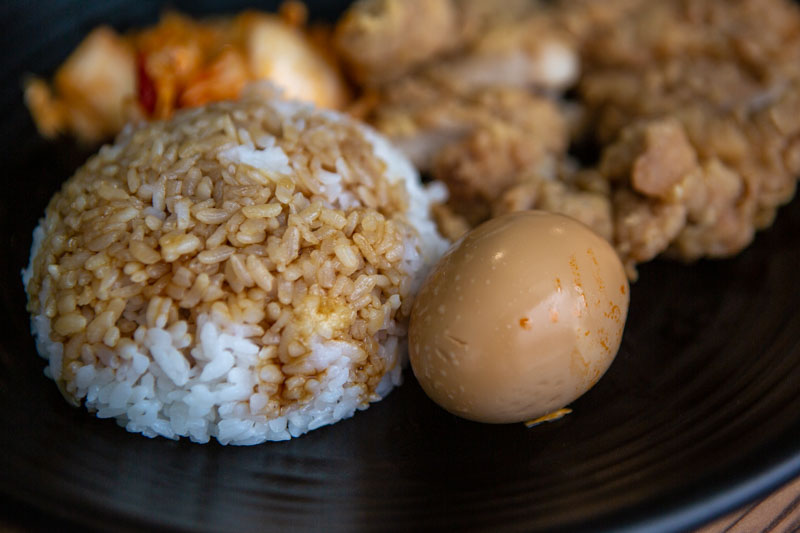 Every dish also comes with a Lava Egg 溏心蛋 (S$0.80 a la carte), which they braise before serving. As we cut into it, the yolk was only slightly runny. It wasn’t entirely gooey, nor did it flow out like we were hoping it would. 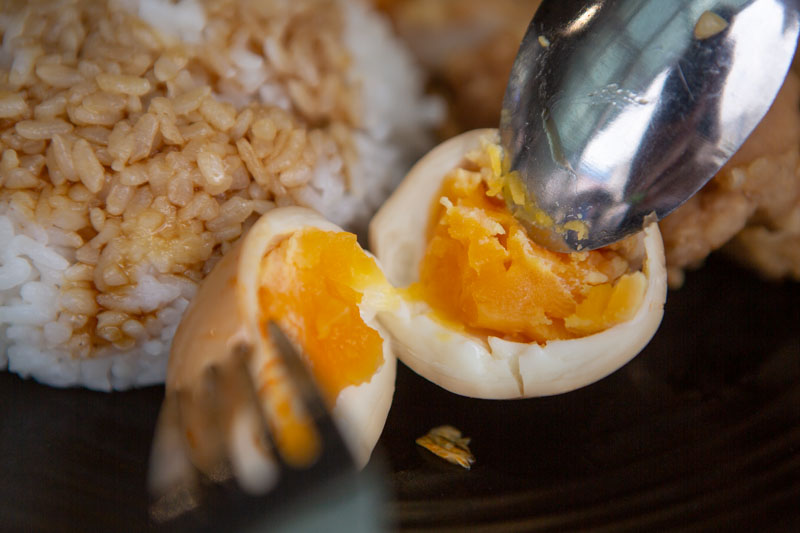 Still, the egg white was very soft, with a tinge of saltiness from the braising. Moving on, we got the Taiwanese Stewed Chick’ N Rice 台式卤鸡肉饭 (S$3.50). This dish is a nod to the famous 卤肉饭 (Braised Pork Rice) from Taiwan. 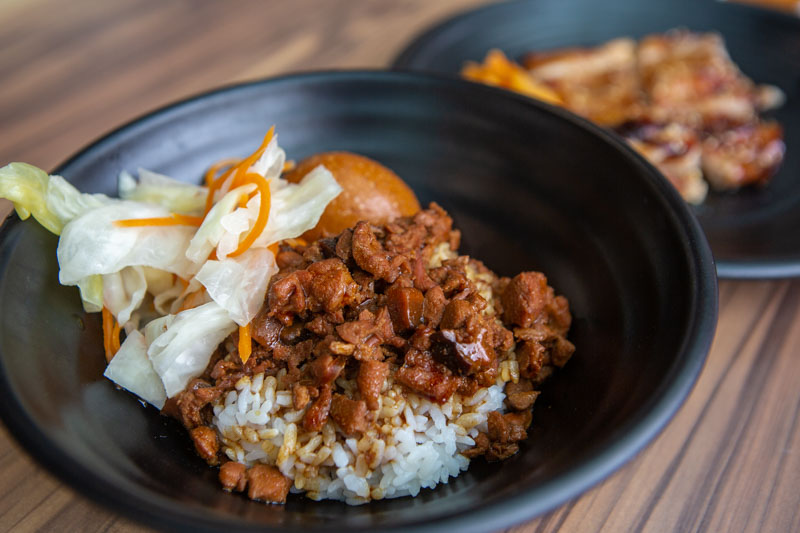 As with the Har Cheong Gai Cutlet, they served it on a bed of Japanese Pearl Rice 珍珠饭 (S$0.80 a la carte). I found this a very nice touch as there was an added chewiness to the rice. I could also taste every individual grain since they weren’t clumpy. 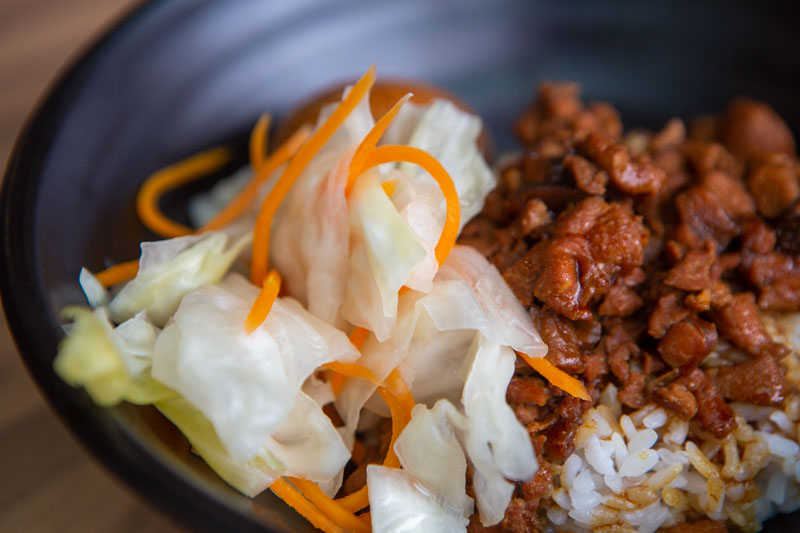 For sides, there was also a Lava Egg. But instead of kimchi, we opted for their Pickled Vegetables. Likewise, it was evident that the vegetables were all fresh from their crunchy texture. We also agreed that they had a refreshing twang of zestiness, which enhanced the flavour profile of every mouthful. 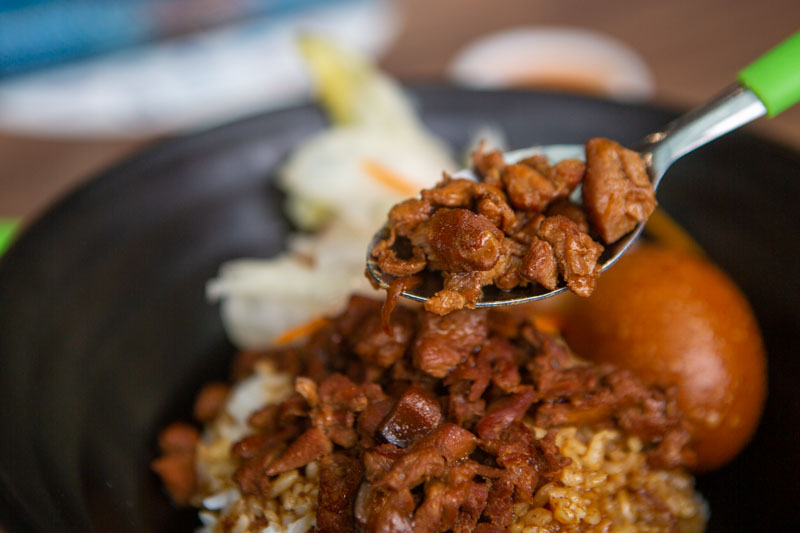 However, we felt the chicken stew wasn’t anything to rave about. While the chicken dices were firm and chewy, they lacked the burst of flavour we were anticipating. 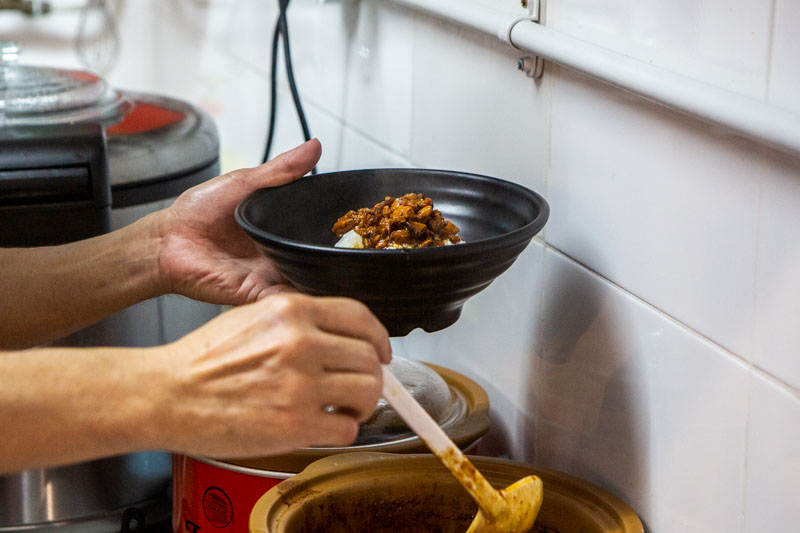 Don’t get us wrong, it wasn’t by any means bland, but we felt it could have used a bit more seasoning. 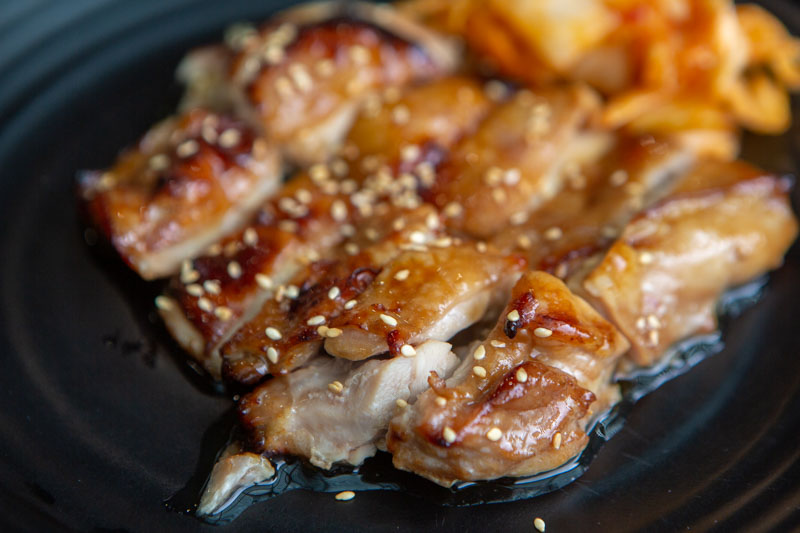 To our delight, it impressed us with its incredibly crispy skin. With a perfect char and a layer of fat beneath it, this was indeed a very sinful dish. 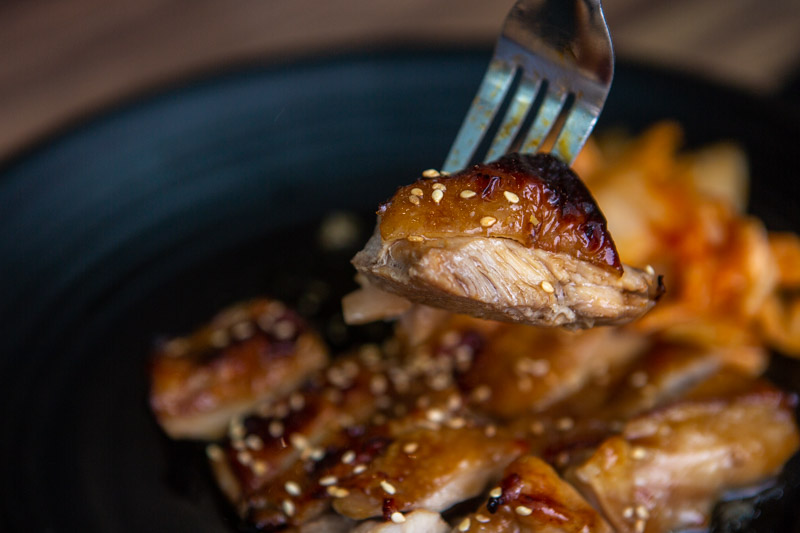 Plus, the chicken meat was juicy and succulent too.

The sweet and salty teriyaki sauce enhanced the flavours even more, and we unanimously agreed it was our favourite dish. There were certainly some hits and misses from our meal at Golden Chick’n Bento. However, they’ve only just started in February 2019. I’m confident that they’ll be able to refine their recipes over time.

Besides, I’d easily find myself back for their affordable food and hearty portions. So do bring your foodie friends over to sample their dishes and give them feedback!