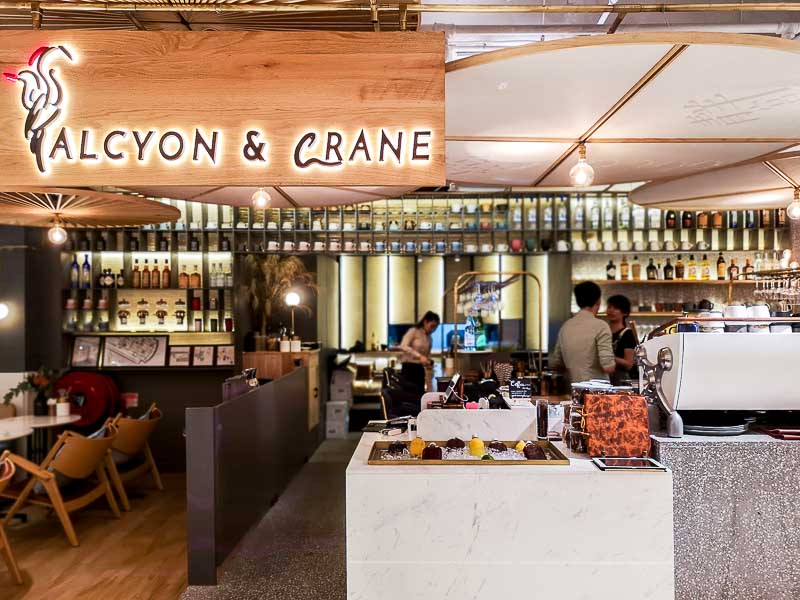 Halcyon; calm, peaceful, tranquil. That’s the kind of ease you’re meant to feel when you dine at Halcyon & Crane, newly-opened at The Paragon.

Much thought was put into the decor, just like the dishes, as the dining space is adorned with curated furniture and tableware, all the way to even the ceiling ornaments. 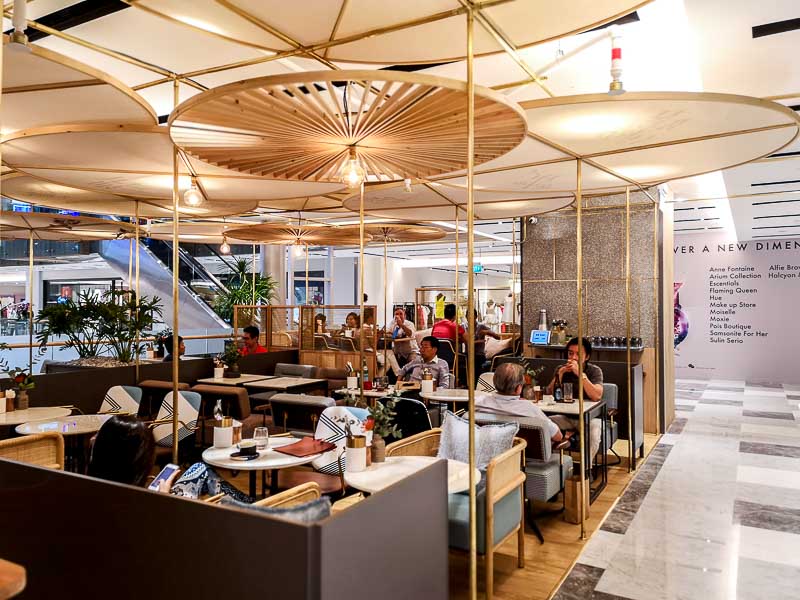 The indoor canopy is made to mimic a clutter of umbrellas that provide shade and each netted circle sees a faint imprint of a monument’s name found in China. Talk about personalisation.

The menu is split into two, serving breakfast and all-day offerings, so there’s no fear of going hungry. This one comes from both their breakfast and all-day dining menus, being an Asian rendition of the classic egg benedict. The King’s Chicken Hash Benedict (S$21) is a serving of two English muffins topped with gong bao chicken, sous vide egg, cheddar cheese and fried potato. When portioned, it transferred onto a side plate as a goopy mess, but pay no mind to its looks as the flavours will override any disdain you may hold against its lack of aesthetics. As the gong bao chicken is stir-fried in peppercorn and chilli peppers, it held plenty of bite, along with the Szechuan BBQ spiced-potatoes.

I truly enjoyed the melted cheddar that offered to calm my burning taste buds, and the sumptuous contrasting texture that made this dish quite decadent. 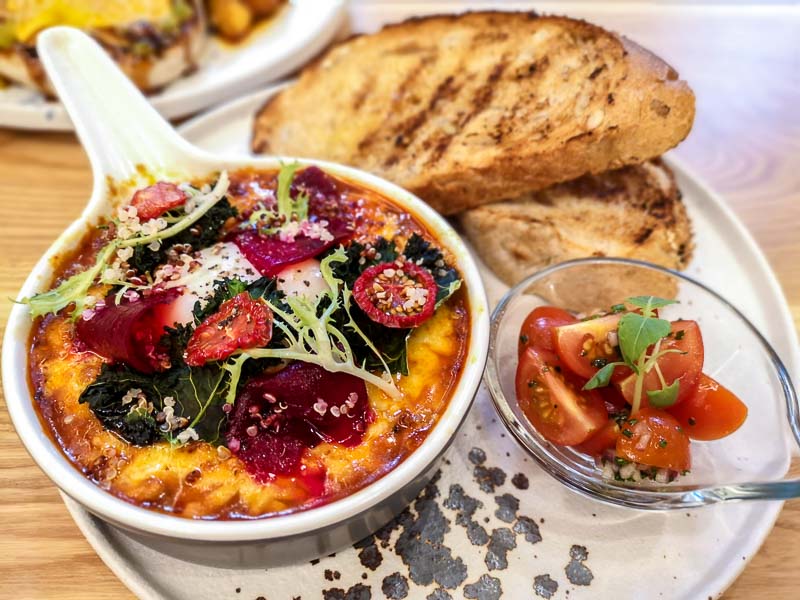 What’s not to love about shakshuka (an Israeli and Tunisian dish made with eggs poached in a sauce of tomatoes, chilli peppers, and onions, commonly spiced with cumin, paprika and cayenne pepper)? It’s one of my favourite brunch dishes, especially when nursing a hangover. 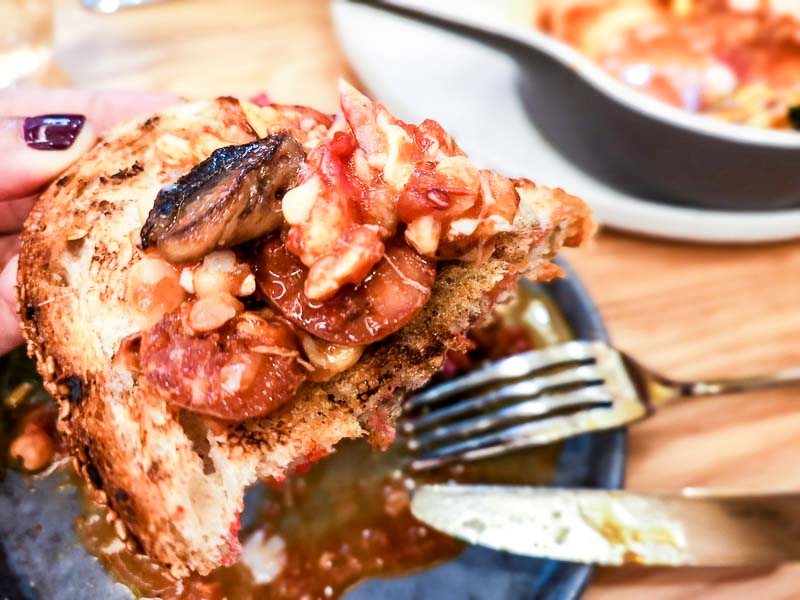 The Cured Sausage Shakshuka (S$20) was robust and rich, with a peppering of mala pork sausages that made it divine. The familiar numbing sensation was very much welcome, and I was delighted to have it accompanied by housemade beetroot toast.

What made this dish stand out was the exceptionally crisp slices of bread; I go gaga over bread that’s so fresh that you can literally hear the crunch when chewing. The Smoked Tuna Tataki Salad (S$21) was anything but ordinary, given that the tuna was amazingly tender and moist. It had a dense texture to it, while the red oil vinaigrette held a bold acidity that cut through the maguro tuna’s fattiness. Should you opt for a light bite, this one’s a winner. 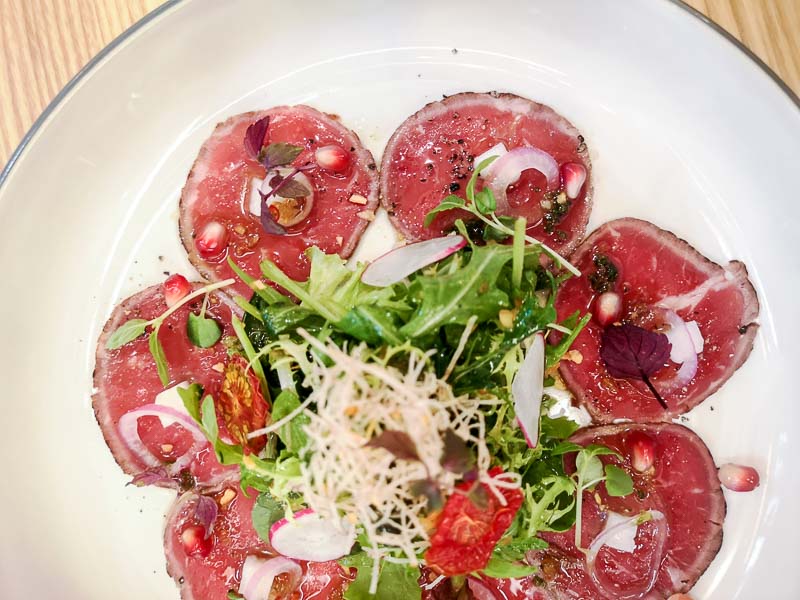 Prefer beef for your starter? The Australia Black Angus Beef Carpaccio (S$23) is only slightly seared, so you’ll get to truly appreciate the fine quality of this exquisite beef. The salad crown that sits upon the delicately-sliced beef is dressed with shan jiao (wild chilli) vinaigrette.

The disparity between meat and acid was a pleasant one, and actually made for a bright and refreshing salad pick, if you ask me. The littering of pomegranate seeds made for a nice touch of sweetness. The most memorable and my personal favourite of the entire meal was the Chicken & Mushroom Capellini (S$23). A single portion is more than sufficient for two to three to share, but with how impressed I was with this, I could very well imagine ordering this on a chilly, rainy day for one. 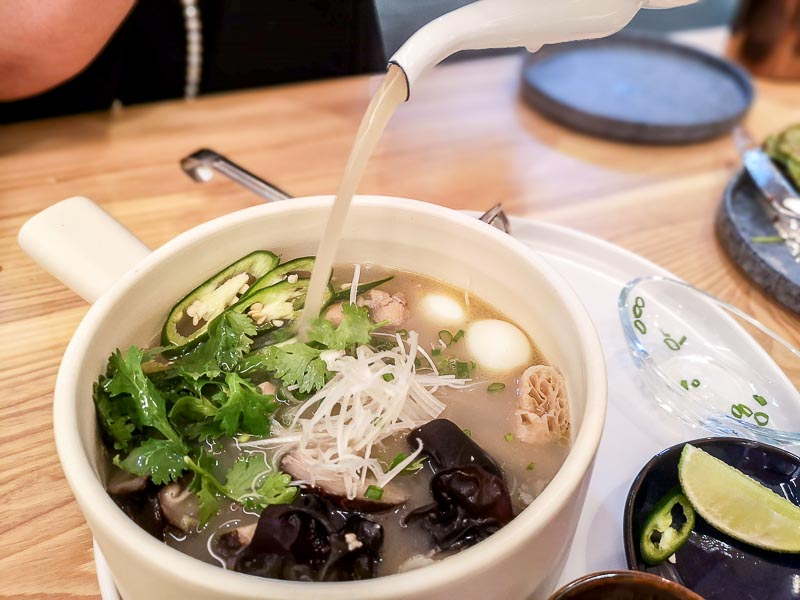 One of the most unique aspects of this dish is that the vermicelli is from Chengdu, and personally sourced by the owner, who fell in love with the texture and flavour from the first bite. He loved it so much, he kept returning to that particular stall and asked where he could get his hands on some.

Is it really that good? It sure was; the vermicelli was more springy than starchy and there was a subtle resistance when I chewed on it. One word: delightful. The broth was something else; it was silky, creamy and rich all at the same time. I would liken it to a warm hug, and I could very well imagine myself enjoying this thoroughly if I were down with the flu.

The use of chicken bones brought about a sense of familiarity, like soup made with love from mum or granny. 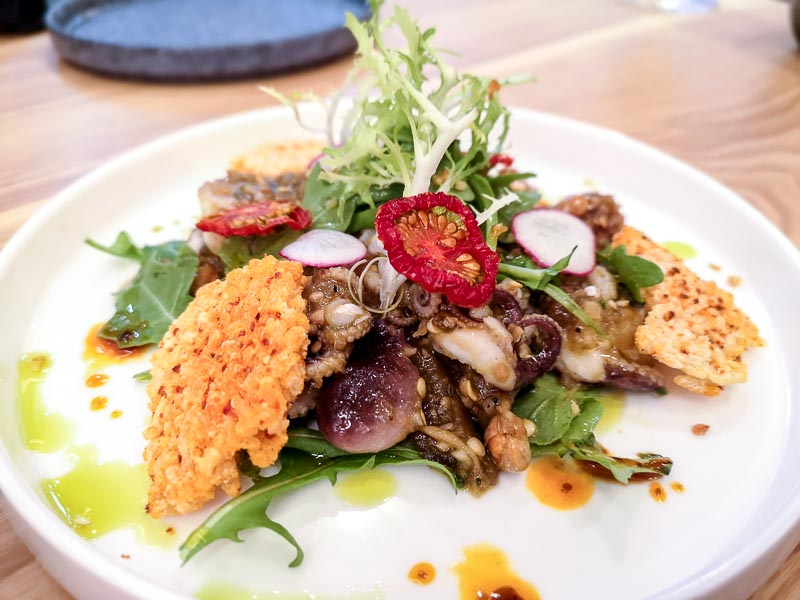 The Marinated Baby Octopus Salad (S$20) was a melting pot of textures and flavours. Cooked with star anise, cinnamon, garlic, ginger, leek, bay leaves and white peppercorn, the baby squid on its own was fragrant, slightly spicy and had a heightened note of pepper. It was served with exceptionally brittle and crisp rice crackers, which just brought the entire dish as one. Switching between hard and soft chews, I really revelled in this multi-sensory gastronomic dish. 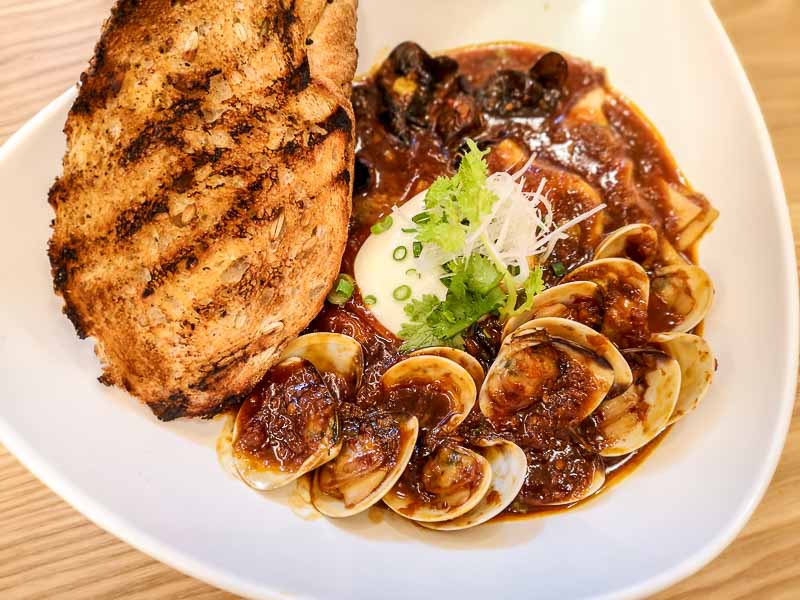 Ever had Clam & Yam Noodle (S$22)? Well, this version is undeniably one of the best you’ll find. The Yu Xiang sauce (fragrant fish sauce) replaced the common white wine that’s normally used to cook clams, while yam noodles took the place of carbs. 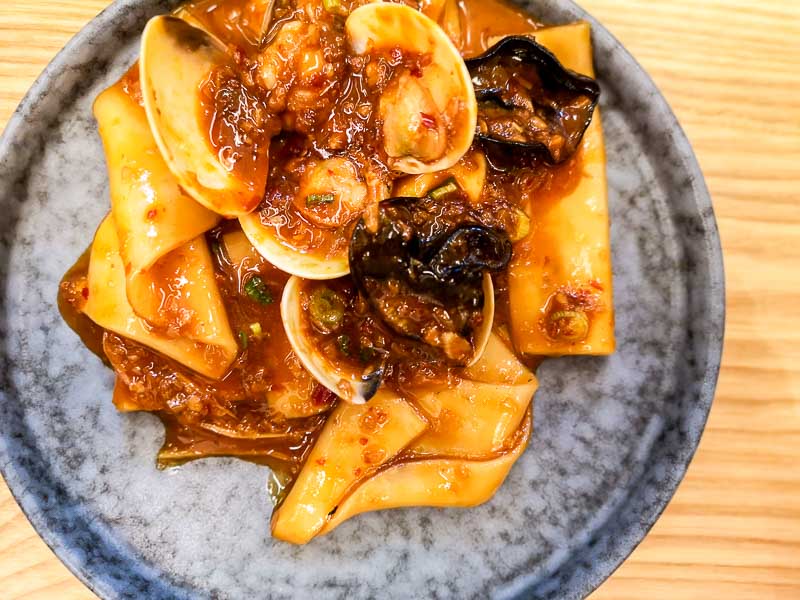 It was savoury and sweet, and I especially loved the slick nature of the yam noodles, all thanks for the viscous and sticky homemade Yu Xiang sauce. A small serving of this was sufficient for me, given the numerous dishes prior as it proved to be pretty filling. 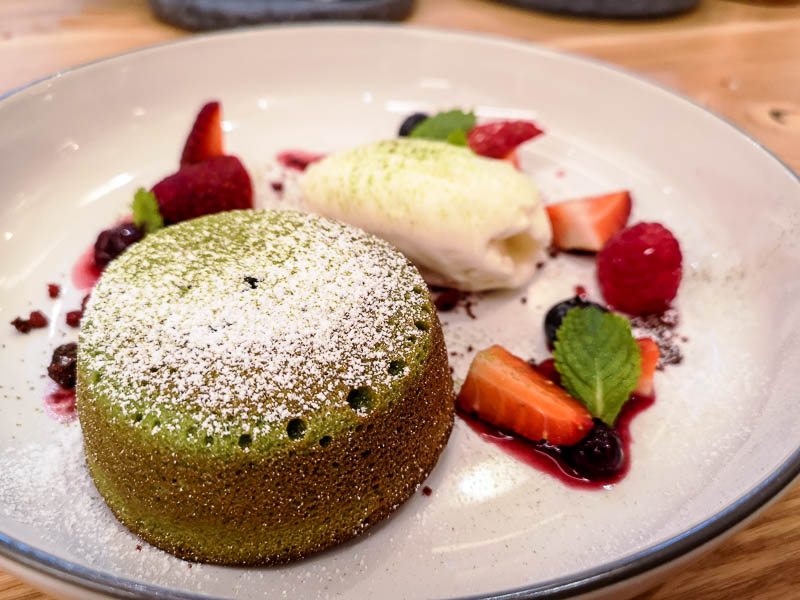 The time for dessert finally dawned on us, and we had the Molten Matcha Lava (S$16), with a side of cheese ice cream. The lava cake was made with a trio of pistachio paste, green tea powder and white chocolate, and turned out as an incredibly fluffy wall that held in a gooey, runny and green magma of goodness. 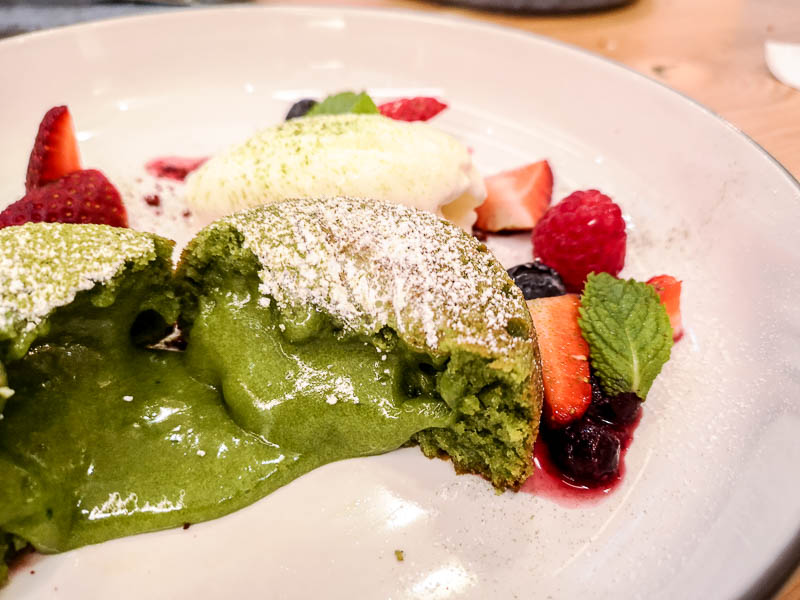 It was utterly satisfying to watch, given the smoky nature of the matcha lava. It wasn’t cloyingly sweet and was easy to finish, despite how satiated I was feeling.

I had no idea what to expect as I anticipated my meal at Halcyon & Crane. Sometimes it’s best to not set standards in your mind, I find, as dining experiences like this one proved.

I was undoubtedly impressed by almost every single dish that exited the kitchen, and the one that stood out for me, without a doubt, was the Chicken & Mushroom Capellini.

Come rain or shine, that particular dish is bound to console and uplift your spirits, just like it did for me in the middle of a hectic work week.